Brazilian aircraft manufacturer Embraer recently announced the delivery of the 700th example of its Phenom family of light executive jets. That’s 700 since the programmes were launched in 2005, a figure that represents almost half of the market share in the entrylevel and light jet segments.

The family includes the Phenom 100, an entry-level jet (formerly referred to as a very light jet) capable of seating four passengers, and the larger Phenom 300 light jet, which is typically able to carry six passengers.

Business aviation company NetJets received the 700th aircraft, a Phenom 300 and the company’s 60th aircraft, delivered from Embraer’s facility in Melbourne, Florida, home to the Phenom 100 and Phenom 300 production lines.

Embraer also recently announced the Phenom 300 was the most delivered business jet in the world in 2015, for the third year running. As of early November, around 340 Phenom 100s and 360 Phenom 300s had been delivered to customers all over the world.

In addition to the success Embraer has enjoyed in the executive jet market, the Phenom 100 has also found a niche role as a multi-engine training aircraft, with orders from several customers, including the UK Ministry of Defence, Emirates, Etihad, the Finnish Aviation Academy (for Finnair), Purdue University in the United States and China Southern Western Australia Flying College (for China Southern Airways).

Embraer entered the business jet market with the launch of its Legacy aircraft in 2000, based on its successful ERJ-135 regional airliner, which first entered service in 2002. The Legacy later became known as the Legacy Executive, then the Legacy 600, and is still in production today as the Legacy 650E. A total of over 280 aircraft have been delivered.

Success of the original Legacy was the catalyst for the creation of Embraer Executive Jets as a separate division in 2005. In May of that year, then-President and CEO of Embraer Maurício Botelho announced the company wanted to strengthen its position in the business aviation market with new products and services. Botelho said the first initiative would be to increase its executive jet portfolio into the very light and light jet segments.

At the time, Maurício Botelho said: “The Legacy has paved the way for Embraer to build a name in the business aviation market. This has been an enriching experience with valuable lessons learned. The accrued knowledge will shape our entrance into the very light, entry and light jet segments, keeping Embraer at the forefront of product development and innovation.”

Embraer’s board had approved the plan the previous month, with $235 million allocated for the design of two types of aircraft. Embraer’s total market forecast for the very light, entry and light segments was approximately 3,000 aircraft over the first ten years – a figure that excluded aircraft purchased for the air taxi market.

First came the smaller Phenom 100, which was later repositioned into the entry-level category that first flew on July 26, 2007, from São José dos Campos. It was awarded Brazilian type certification in December 2008 and deliveries began the same month. Development of the Phenom 300 followed around 12 months later, flying for the first time from São José dos Campos on April 29, 2008. Type certification and delivery to the first customer followed in turn in December 2009. 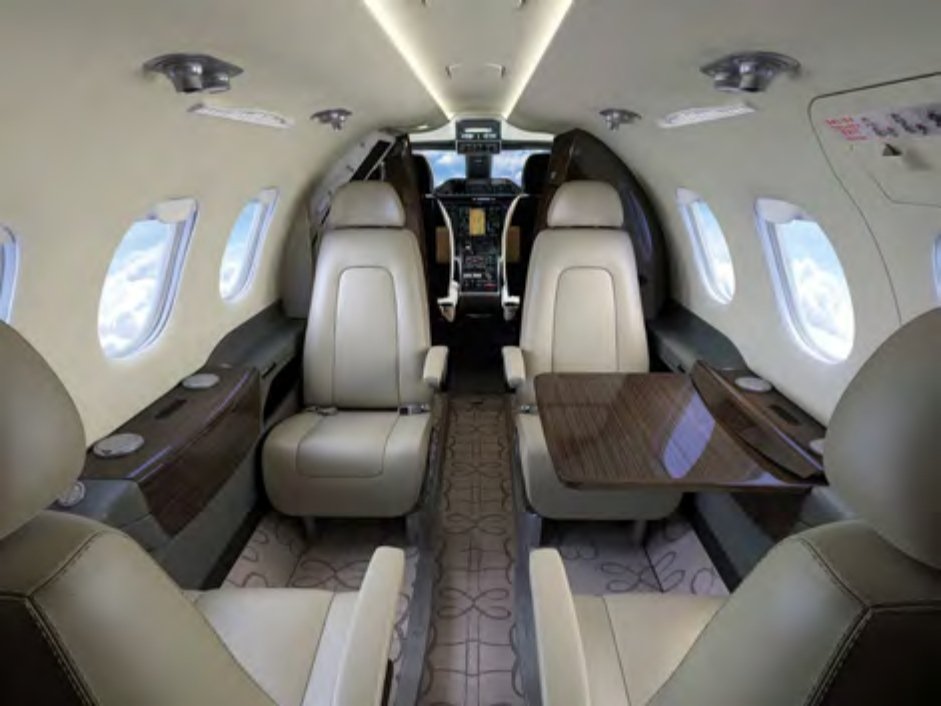 A Phenom 100 cabin finished in a style called Tiffany.

Since the Phenom family’s development Embraer’s portfolio of business jets has increased further, beginning with the ultralarge Lineage 1000, based on the E190 airliner, which entered service in 2009, and most recently with the all-new Legacy 450 mid-light jet and Legacy 500 mid-size designs, which entered service in 2015 and 2014 respectively. In April 2016, despite being in the business aviation market for a little more than a decade and a half, Embraer announced the sale of its 1,000th executive jet, a Legacy 450. 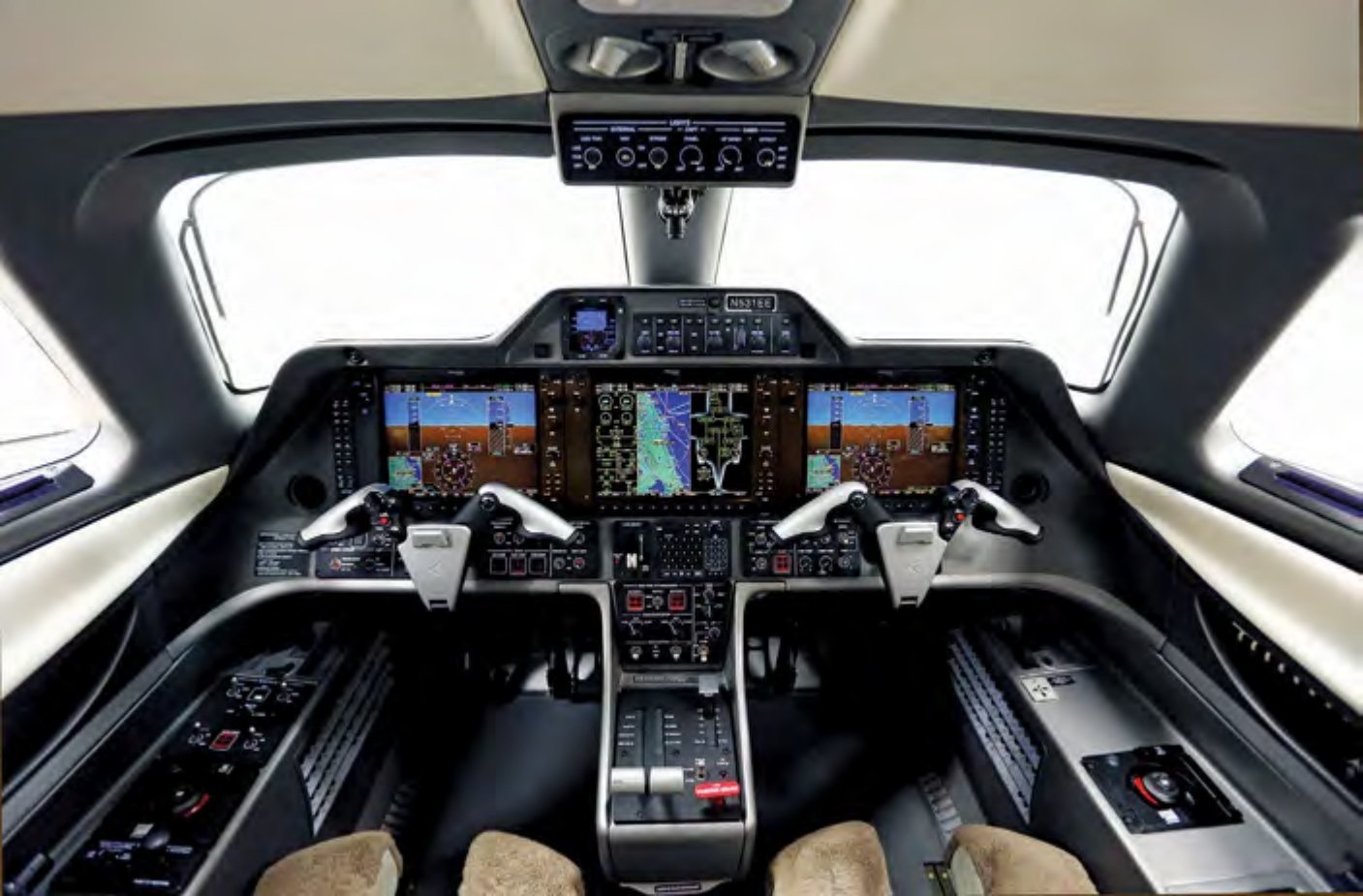 The Phenom 100E is equipped with Embraer’s Prodigy 100 flight deck, a system based on the Garmin 1000 avionics suite.

Designated the EMB-500, a company type designation, the Phenom 100 is listed with the capability of carrying between six and eight people, including the single pilot. The typical load is four passengers, seated in a club-style layout in a cabin designed by BMW Designworks. A fifth passenger can be accommodated in a sideways-facing seat at the rear of the cabin (which is also the lavatory) if required.

Embraer says the airframe is designed for high utilisation, with a life of 35,000 hours and maintenance intervals set at 12 months or 600 flight hours.

Embraer chose the 2016 edition of the EAA AirVenture show at Oshkosh, Wisconsin to announce the Phenom 100EV, a further evolution of the Phenom 100E introduced in 2013 that added multifunction flight spoilers to the original design. The new variant made its global debut at the NBAA Business Aviation Convention and Exhibition on Orland Florida in early November.

Changes over the original Phenom 100 configuration include replacement of the Prodigy 100 (based on the Garmin 1000) avionics suite with the Prodigy Touch (Garmin 3000-based) suite, and replacement of the full authority digital engine control unit with a new system, which offers improved hot and high performance. Time to climb performance has also been improved; the Phenom 100EV can climb to the 41,000ft (12,500m) service ceiling in 25 minutes, compared with 33 minutes for the original version.

Launch customers for the Phenom 100EV are Across, a Mexican premium aviation business services provider, and Emirates’ Flight Training Academy. Across, based at Toluca International Airport, serves Mexico City, so the company will benefit particularly from improved hot and high performance.

Manager of Product Strategy for Embraer Executive Jets Alvadi Serpa told AIR International: “We have managed to reduce hot and high take-off field length by 1,000 feet [305 metres]. The Phenom 100 was able to deliver a range of 200 nautical miles [370km] out of Toluca on a hot day, while the Phenom 100EV delivers a range in excess of 900 nautical miles [1,670km] under the same conditions, so it’s a huge improvement. Previously we couldn’t make it to Cancun from Toluca, but now we can go to Managua in Nicaragua or Oklahoma City in the United States.”

Embraer’s customer base for the Phenom 100 is worldwide; there are more than 340 currently flying in 37 countries around the globe: the enhanced Phenom 100EV will enter service in the first quarter of 2017. The Phenom family aircraft were initially produced in São José dos Campos, but the production lines were relocated to Melbourne, Florida, earlier this year. Production of the Legacy 450 and Legacy 500 is also in the process of being transferred to the United States, leaving only the Legacy 650E and Lineage 1000E (both derivatives of Embraer’s regional aircraft and airliner designs) remaining in Brazil by early 2017.

Although it shares the same cross-section of its smaller sibling, the BMW-designed cabin of the Phenom 300 is lengthened to accommodate six passengers. The aircraft also has a swept wing and Pratt & Whitney Canada PW535E engines, each producing 3,200lb (14.23kN) of thrust, which together provide a 453kts cruise speed and a maximum cruise altitude of 45,000ft (13,700m). Maximum range, with four passengers, is 1,971 nautical miles (3,650km).

Embraer claims the aircraft has the best climb performance in its class and a cabin altitude of 6,000 feet (1,828m) at maximum cruise altitude. Other features are a single point pressure refuelling system and an externally serviced lavatory. 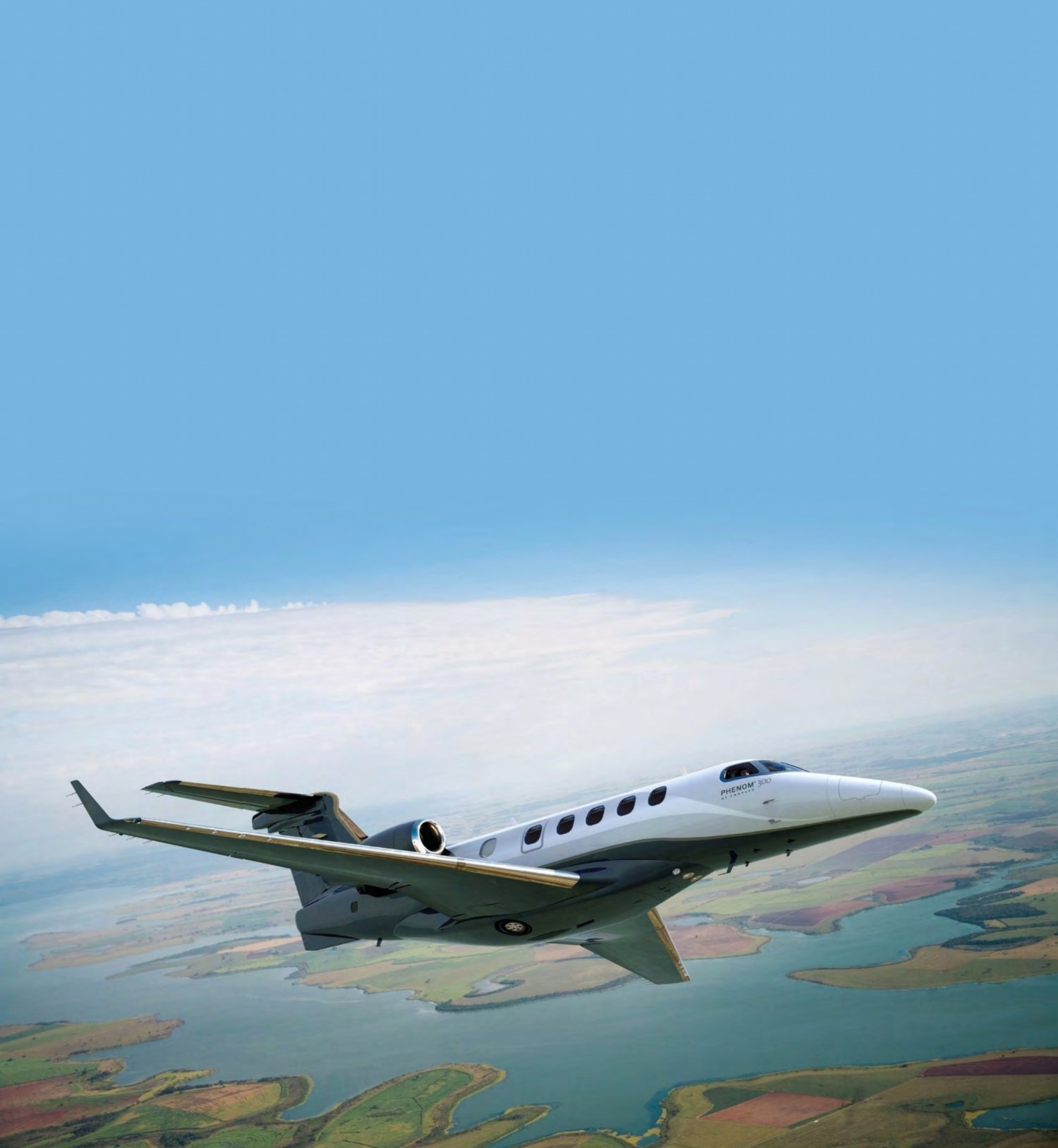 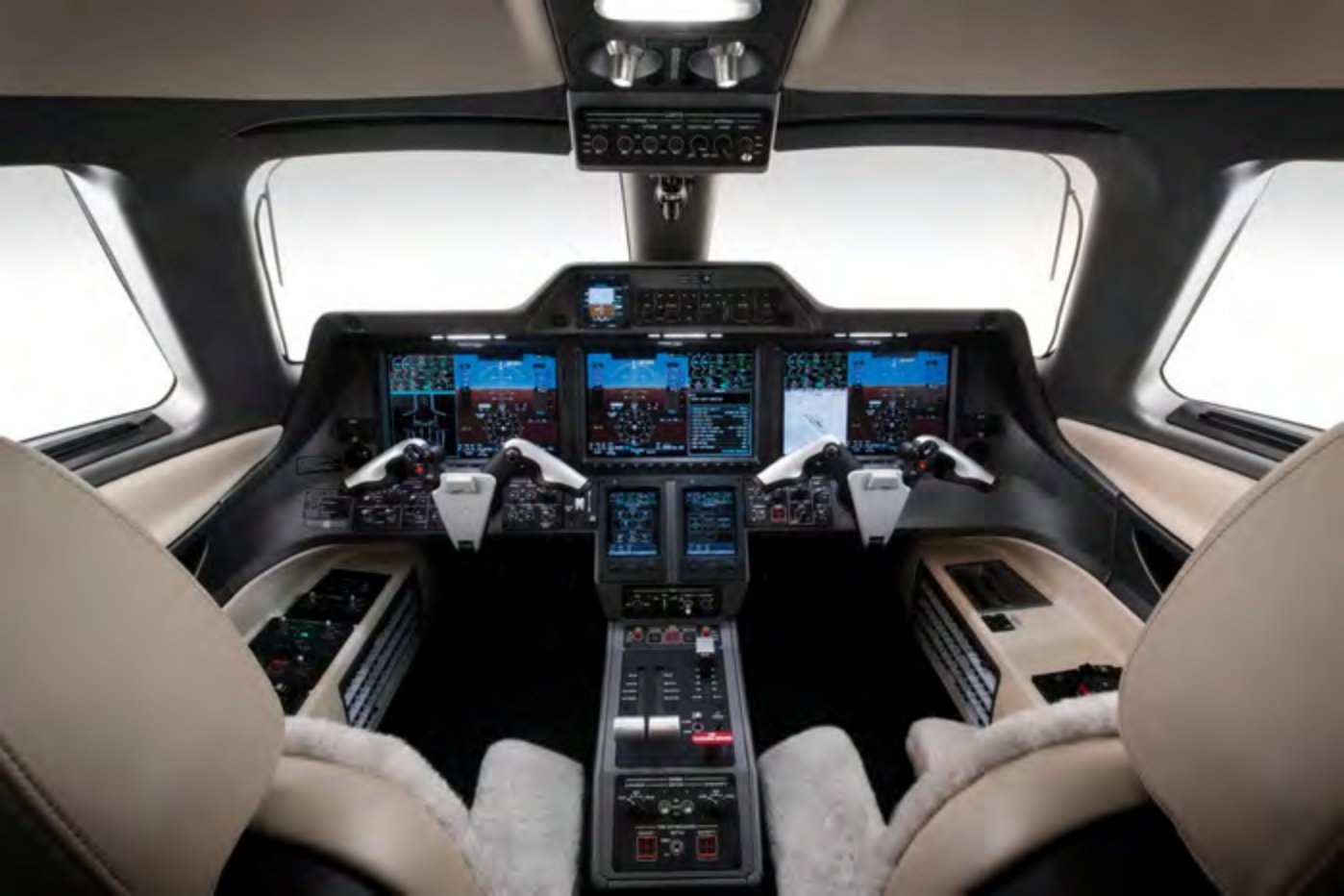 The Phenom 300 is equipped with Embraer’s Prodigy Touch flight deck based on the Garmin 3000 avionics suite.

Alvadi Serpa said: “We are seeing great acceptance from all sectors in the market sector, high-level operators, charter companies and fractional operators. All of the large fractional operators around the world, companies like NetJets, Flight Options and Executive AirShare, all have Phenom 300s in their fleet.”

In 2010, NetJets signed a $1 billion purchase agreement with Embraer for 50 aircraft and options for 75 more. In September 2016, China’s Colorful Yunnan General Aviation Company signed a firm order for two Phenom 300s, to be delivered by the end of 2016. The aircraft will be used to expand Colorful’s services in Yunnan and offer an executive supplement to the airlines’ current network.

At the European Business Aviation Convention & Exhibition held in Geneva during May, Embraer announced a range of interior improvements to the baseline Phenom 300 in a strategy aimed at retaining market share. Explaining the initiative, Alvadi Serpa said: “We have improved the design of the fold-out table, so now we have a flat surface all the way from the sidewall to the aisle, which increases available space for the passengers. The cabin side ledge is now made from wood veneer instead of leather, a more durable surface. We’ve also repositioned the cup-holders and electrical power outlets to make them easier to access.”

With over 700 aircraft delivered in just over seven years, Embraer’s Phenom family is an undoubted success story in the tough world of business aviation – a market that is very sensitive to global financial conditions.

Embraer’s Vice President of Marketing and Sales for the Middle East and Asia-Pacific regions Claudio Camelier said: “Our executive jets division is the newest division in the brand. It was created in 2005 and in those ten years we’ve had remarkable progress and growth. We’ve expanded our portfolio from one aircraft, the Legacy 600, to a full portfolio of seven aircraft types today. We have aircraft flying in 60 countries and on every continent in the world [Antarctica excluded]. Our most successful products, in terms of quantities produced and delivered, are the Phenom 100 and 300.”

Camelier said although the jet trainer market was not the original target for the Phenom 100, Embraer has been pleasantly surprised by its performance in the segment. 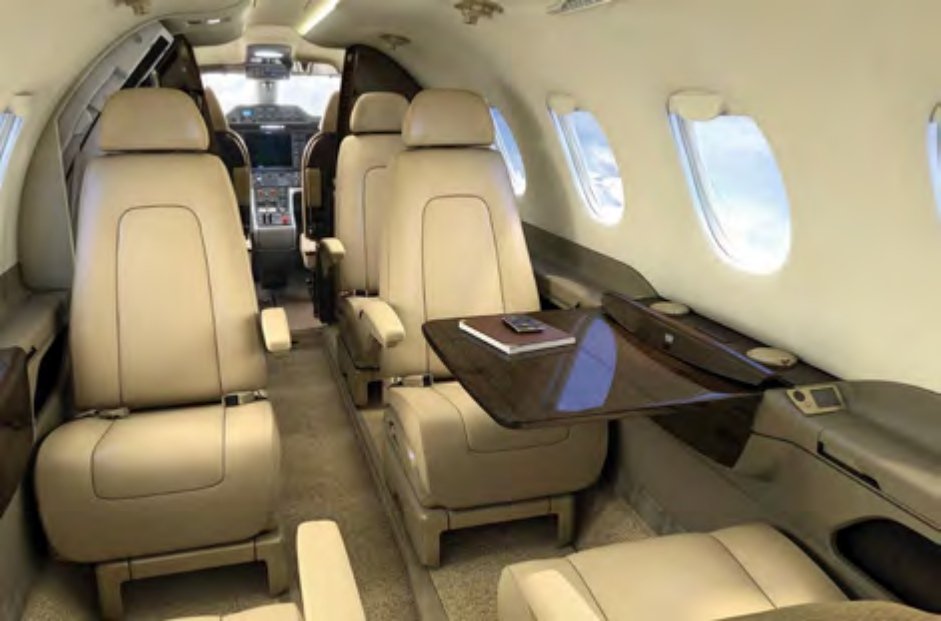 The Phenom 300’s cabin is both spacious and light.

Embraer does not release a market forecast by product line, so predictions of future sales for the Phenom family are difficult to predict, but Camelier said the global market forecast – over all manufacturers and all aircraft types – is for 9,100 aircraft, valued at approximately $259 billion over the next ten years: “Last year, North America took 66% or two-thirds of new business jet deliveries and we believe that 2016 will be roughly the same.”