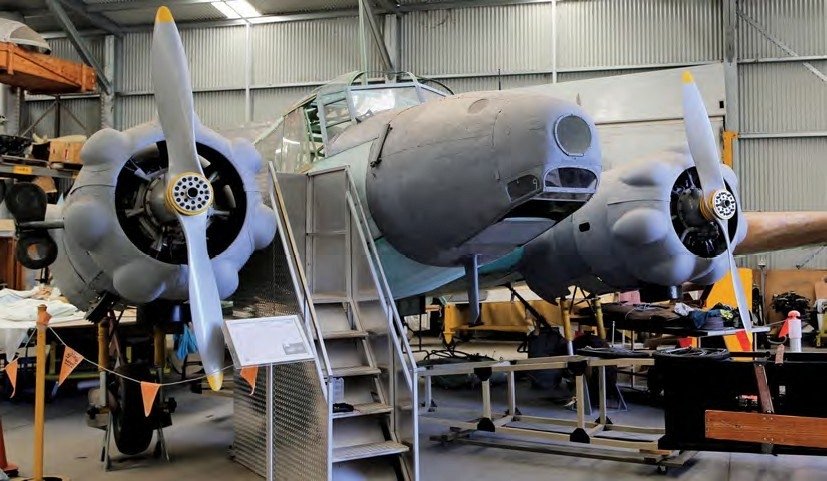 Anson I EF954 in the restoration hangar at theSouth Australian AviationMuseum.
PETERR. ARNOLD

Construction of a new, 1,200-square metre display hangar at the South Australian Aviation Museum in Port Adelaide was due to be completed before Christmas. The first two aircraft to enter the building will be recently completed Avro Anson I EF954 and de Havilland Canada DHC-4 Caribou A04-225, which arrived by road at the museum from the Oakey Army Aviation Centre in Queensland in June 2016.

Construction of the $5-million building began in September, with $205,000 of the cost being met from the Commonwealth Government’s National Stronger Regions Fund.

The Anson was the first aircraft taken on charge by the museum back in June 1984, and was due to be rolled into the new hangar almost exactly 72 years after being delivered to No 6 Service Flying Training School at RAAF Mallala, 30-odd miles north of Port Adelaide, on 28 December 1942. Once in position, the former crew trainer will be painted in its original No 6 SFTS markings. Acquired via the Commonwealth Disposals Commission by Mallala-based farmer Reg Franks in May 1947, it was donated by him to the nascent museum 38 years later.

Restoration of the rarest aircraft in the collection, Fairey Battle I N2188, moved on apace during 2016, the museum president Peter Van Dyk saying, “the Battle has advanced more this year than in the previous 10”. The tail section including the fin, rudder, tailplanes, elevators, tailwheel and tailcone is approaching completion, while a non-running Merlin engine has been acquired and is being used to ensure that the engine cowlings can be properly fitted. It is hoped to have the fuselage complete and the undercarriage fitted by the end of 2018.