Virgin Galactic is gearing up towards the launch of its space tourism flights. Mark Broadbent reports 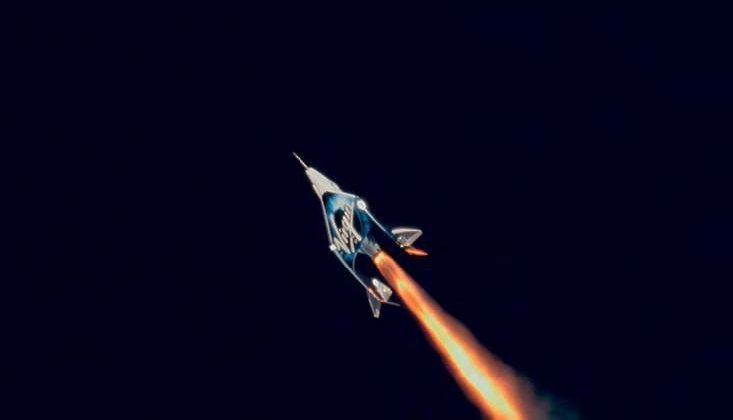 On December 13, 2018, the Virgin Galactic WhiteKnightTwo aircraft VMS Eve, N348MS (c/n 001) lew above the California desert, its white fuselage and contrails behind its engines standing out against the blue winter sky.

At around 45,000ft, on the command of the Virgin Galactic mission control centre, Eve’s crew released the streamlined craft it was carrying beneath its wings: SpaceShipTwo VSS Unity, N202VG (c/n 2).

With pilots Mark Stucky and Frederick Sturckow aboard, Unity fell away beneath Eve before its hybrid rocket motor was engaged. Within eight seconds, SpaceShipTwo was supersonic. The pilots pulled up its nose and Unity speared towards space, its engine burning for 60 seconds, propelling the spaceplane to a peak speed of Mach 2.9 and an altitude of 51.4 miles above Earth’s surface.

Unity’s unique feathering system, which rotates the wings and tail booms upwards for spacelight, was then deployed by Stucky and Sturckow and the spaceship decelerated and descended through the atmosphere at a speed of Mach 2.5, landing at Mojave Air and Space Port.

Unity’s light was the fourth powered test light by Unity; the irst was on April 5, 2018. These lights followed a series of trials started in 2017 to examine SpaceShipTwo’s performance, stability, control and engine performance after light-testing resumed following the fatal 2014 crash of the irst SpaceShipTwo, VSS Enterprise.

The light was therefore a signiicant step forward in Virgin Galactic’s plans to introduce commercial human spacelight and in the wider endeavour of creating a new era of space tourism. The company describes itself as “the world’s irst commercial spaceline” and notes that SpaceShipTwo is the irst crewed, passenger-carrying spaceship built by a private company.

After the December flight, Virgin Galactic founder Sir Richard Branson said: “Today, we completed our irst revenue generating light and our pilots earned their Commercial Astronaut Wings. Today, we have shown that Virgin Galactic really can open space to change the world for good.”

Virgin Galactic is one of several billionairebacked organisations planning to take farepaying passengers into space. Other players are Blue Origin, set up by Amazon founder Jef Bezos, which is working on a reusable rocket called New Shepard, and SpaceX, founded by Tesla Chief Executive Elon Musk.

Virgin Galactic uses a two-stage launch system consisting of SpaceShipTwo and its custom-built WhiteKnightTwo carrier aircraft. WhiteKnightTwo lifts SpaceShipTwo in a captive carry to an altitude of around 45,000– 50,000ft before releasing the spaceship.

Following release, SpaceShipTwo’s RocketMotorTwo rocket engine is engaged in what is called the boost phase of the mission. This second phase sees the vehicle accelerate rapidly and ascend to the mission’s apogee in suborbital space. Video of the December light released by Virgin Galactic captured by a camera aboard Unity vividly shows the acceleration and pull to the vertical during the boost phase. 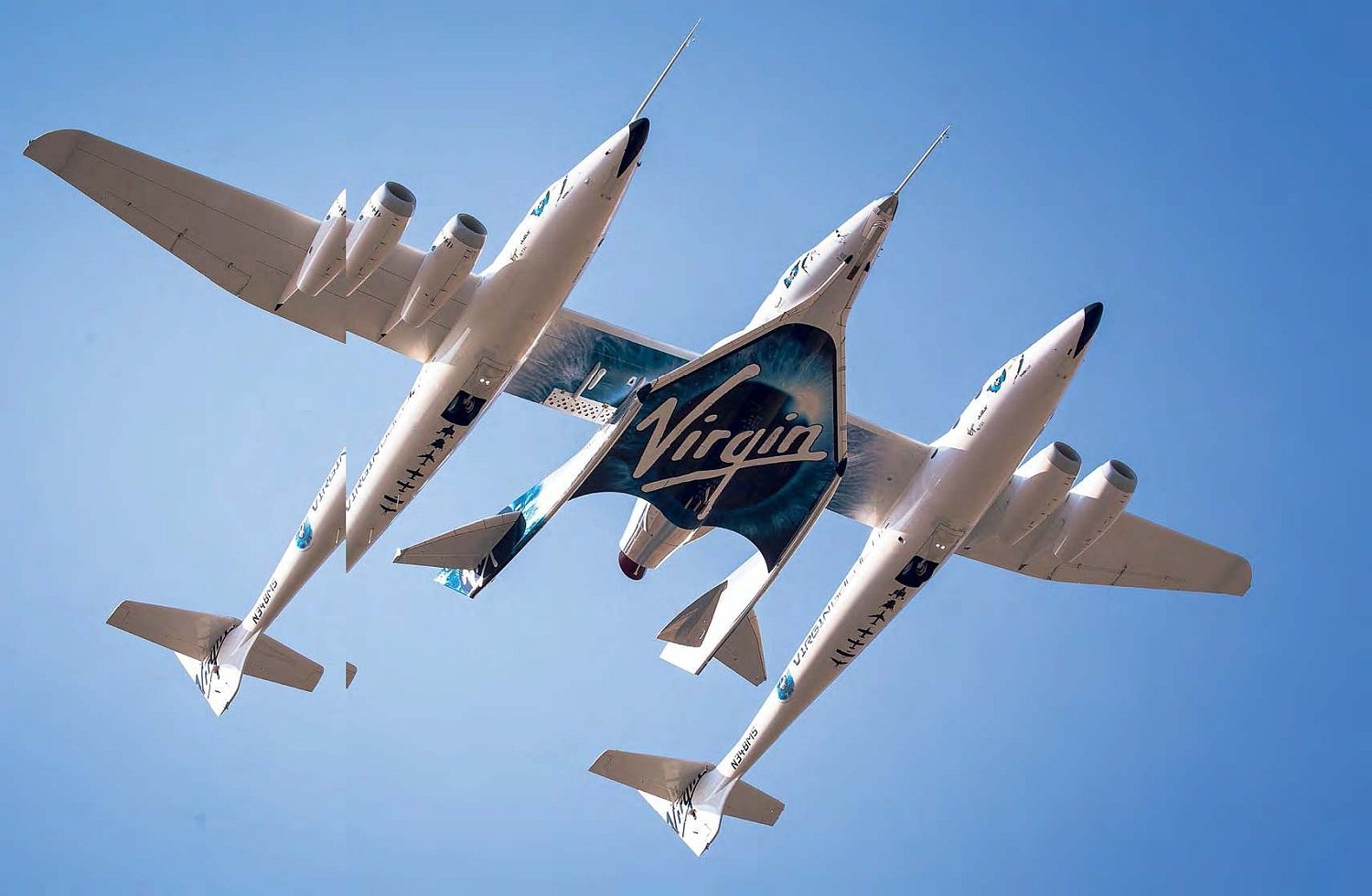 After around one minute the engine is cut and SpaceShipTwo coasts to its cruising altitude. On operational space tourism lights, the vehicle will carry two pilots and six passengers in the cabin. Those aboard will experience several minutes of weightlessness and views of the Earth below through 7.5ftdiameter (2.2m) windows positioned to aford maximum viewing potential, with their 90indiameter (2,286mm), 12ft-long (3.7m) seats positioned in a reclined position to maximise cabin space during zero-g conditions.

Using its feathered re-entry system, SpaceShipTwo will then glide back down through the atmosphere to land. The total light time, including the ascent to release altitude by WhiteKnightTwo’s captive carry, will be between one-and-a-half and two hours. SpaceShipTwo will ly independently for approximately 30 minutes from release to landing.

SpaceShipTwo is derived from SpaceShipOne, the vehicle that back in 2004 reached an altitude of 67.9 miles above Earth to win the Ansari X-Prize, the contest for the irst crewed commercial reusable vehicle to ly in space.

Mojave Aerospace Ventures, which developed and operated SpaceShipOne and its WhiteKnight carrier aircraft, signed a deal with Virgin Galactic to develop the Virgin SpaceShip for space tourism. Virgin Group and Scaled Composites subsequently formed a joint venture, The Spaceship Company, to manufacture new versions of the spaceplane and carrier aircraft, respectively SpaceShipTwo and WhiteKnightTwo.

SpaceShipTwo is 60ft (18.2m) long, with its wing/tail boom spanning 42ft (12.8m) and it is 15ft (4.6m) in height. Its single RocketMotorTwo hybrid rocket motor engine is controllable, can be shut down at any time and uses benign fuel and oxidiser (the same means of propulsion as SpaceShipOne). It is constructed from 100% carbon ibre composites.

The vehicle’s feathering technology, which rotates the wings and tail booms, has been likened in its principle to the feathers on a badminton shuttlecock, which are angled to create drag and control a shuttlecock’s descent through the air.

SpaceShipTwo’s ‘feathers’ similarly adjust the spacecraft’s shape when the vehicle is in its suborbital operating environment to enable the crew to control the rate of deceleration. This is designed to let the vehicle descend effciently through the atmosphere and glide back to the ground.

Earth as viewed from SpaceShipTwo in December 2018 when the vehicle reached an apogee of 51.4 miles.

Like SpaceShipTwo, the WhiteKnightTwo carrier aircraft is made entirely of carbon fibre composites (Virgin Galactic describes it as “the largest all-composite aviation vehicle in service”). The aircraft is 78ft (23m) long, has a 140ft (42m) wingspan and a tail height of 26ft (8m). It was based on the WhiteKnight carrier aircraft used as SpaceShipOne’s mothership for the X-Prize contest (WhiteKnight was itself derived from Scaled Composites’ Proteus), but there are key differences between the aircraft. WhiteKnightTwo has a twin-fuselage layout with two cruciform tails and four Pratt & Whitney Canada PW308 turbofans (each generating 6,900lb/30.69kN thrust) hung underneath the wings, while the first WhiteKnight has a single fuselage, T-tails and a pair of engines on either side of the fuselage.

Both WhiteKnights have been designed with configurations lending themselves to highaltitude operations carrying different payloads. It was intended that WhiteKnightTwo would also serve as an air-launch platform for the LauncherOne small satellite launcher under development by Virgin Galactic’s sister company Virgin Orbit, but a converted Boeing 747-400 is being used for that mission instead.

Still, Virgin Galactic insists WhiteKnightTwo is a “unique high-altitude lift aircraft potentially suitable for various payloads” thanks to its “large and easily accessible payload area”. The company says WhiteKnightTwo could potentially train future spaceship pilots and space tourists, as its two fuselages exactly replicate SpaceShipTwo’s fuselage and, because the aircraft is able to fly zero-g parabolas, it can also be used for zero-g training.

WhiteKnightTwo had conducted 261 flights and SpaceShipTwo had completed 72 flights by mid-December 2018. The flights involving SpaceShipTwo have been mainly captive carry, glide and cold flow test flights, but Unity had also completed seven rocket-powered, supersonic flights by that point.

Whitesides said: “Reusable vehicles built and operated by private companies are about to transform our business and personal lives in ways which are, as yet, hard to imagine. New enterprises are being created which will become hugely valuable, while enabling humanity to better manage some of its greatest future challenges.”

Branson said Virgin Galactic would give “thousands of private astronauts an experience which provides a new, planetary perspective to our relationship with the Earth and the cosmos”.

In addition to flying passengers, Virgin Galactic also plans to use SpaceShipTwo to fly scientific experiments. Indeed, aboard VSS Unity on the December test flight were four research payloads for NASA’s Flight Opportunities programme, which were carried to prove their performance in microgravity.

One experiment was to map the behaviour of dust particles and another was a multiphase flow experiment separating gas and liquid. The other payloads were a mounting interface for orbital and suborbital vehicles designed to lessen disturbances during launch, re-entry and landing, and an experiment using a biological fluorescent imaging instrument to collect data on the biological response of a plant and plant tissue in microgravity. 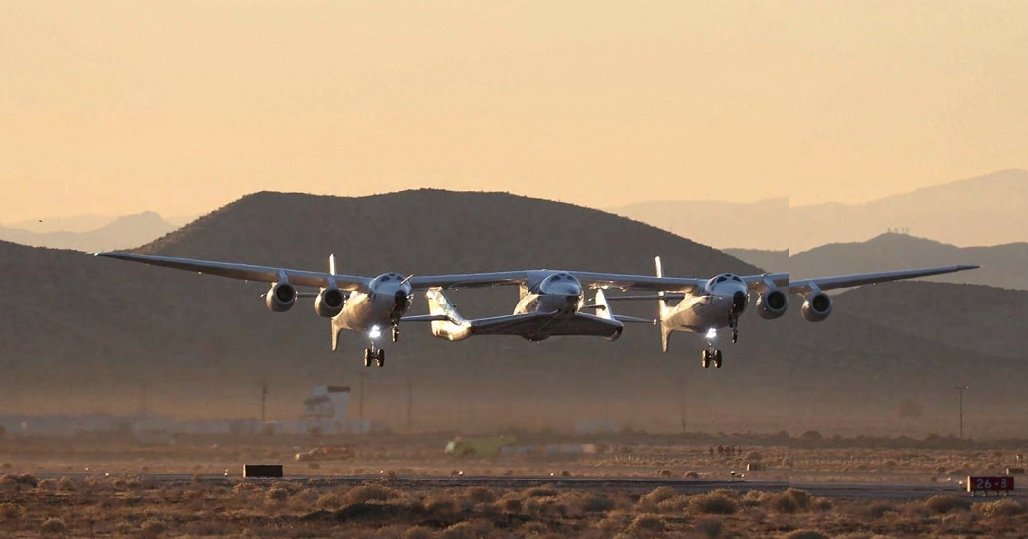 Virgin Galactic’s WhiteKnightTwo mothership VMS Eve lifts SpaceShipTwo from Mojave; it takes about an hour to reach the altitude at which the spaceplane is released.

Where does space begin?

The attention across the media about SpaceShipTwo’s latest flight highlights a fundamental question: where do you believe space begins?

When Unity reached its 51.4-mile apogee on its December 2018 flight, mission control said: “Unity, welcome to space”. This was a reference to the fact that SpaceShipTwo had passed the altitude of 50 miles above sea level, which NASA and the US Air Force have since the 1960s defined as the boundary between Earth’s atmosphere and space.

Virgin Galactic boasted shortly after the flight that its mission was the first human spaceflight from American soil since the last Space Shuttle flight in 2011 and the first time a crewed vehicle built for commercial passenger service had reached space. In recognition, early 2019 will see pilots Stucky and Sturckow awarded the first US Federal Aviation Administration Commercial Astronaut Wings. (All individuals who have passed through the 50-mile boundary receive astronaut wings from NASA and the US Air Force; as a four-time Space Shuttle pilot Sturckow already has a pair.)

However, the NASA/US Air Force definition of space starting at 50 miles up is not the exclusive measure of where Earth’s atmosphere ends and space begins. The Karman Line, an altitude of 62 miles, is an alternative definition. Named after the German aerodynamicist Theodore von Kármán, the Karman Line is used by the offcial aviation and spaceflight recordkeepers of the Fédération Aéronautique Internationale (FAI) as the point where space begins rather than the NASA/US Air Force 50-mile marker. The Karman Line was also the altitude Ansari X-Prize contenders had to reach to win the prize.

The different classifications exist because there has never been a single, universally agreed definition written into treaties and international law about exactly where Earth’s atmosphere ends and space begins. 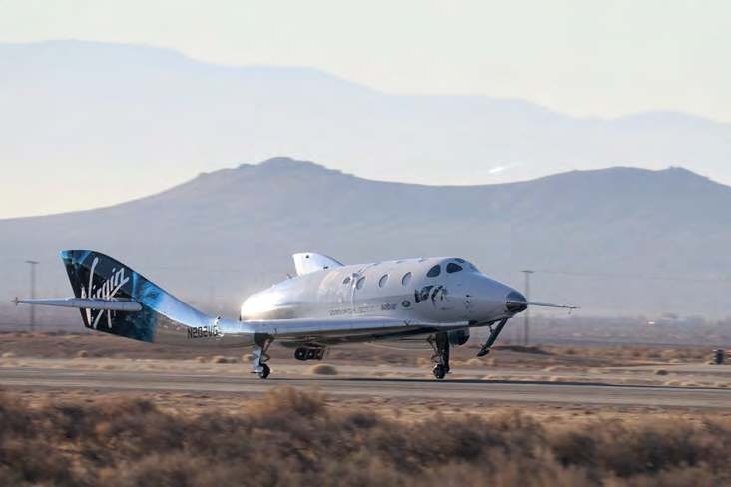 SpaceShipTwo returns to Mojave after its re-entry and glide back to Earth; its hybrid rocket engine is only engaged for the ascent to space. 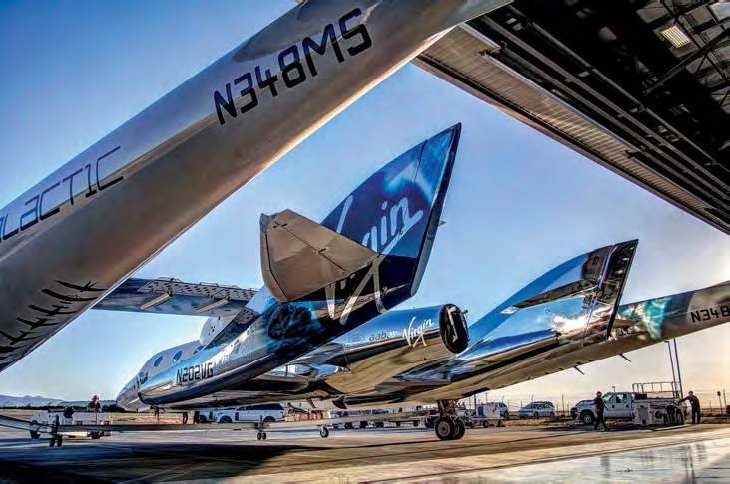 SpaceShipTwo’s ‘feathering’ tails rotate to adjust the spacecraft’s shape in its suborbital operating environment to enable the crew to control its rate of deceleration.

For the nascent space tourism industry, clearing up this decades-long ambiguity will clearly be beneficial in helping to define more precisely how far into space a space tourist will actually go.

There are signs the ambiguity could end. In November 2018, the FAI announced it would in 2019 consider revising its definition of where space begins so that it, too, will classify space starting at 50 miles altitude, like NASA and the US Air Force. The FAI said: “Recently published analyses present a compelling scientific case for reduction in this altitude from 100km [62 miles] to 80km [50 miles].” One of these studies was an October 2018 paper by a Harvard-Smithsonian Center for Astrophysics academic, Jonathan McDowell, published in the scientific journal Acta Astronautica.

McDowell used mathematical analysis and modelling to conclude gravity exceeded aerodynamic forces at altitudes of 70–90km (43–56 miles) and that 80km (50 miles) would be, “a more suitable choice to use as the canonical lower ‘edge of space’”.

Whatever happens with the definition of where space starts, Virgin Galactic says SpaceShipTwo is capable of even better performance than it demonstrated in the December 2018 flight.

Branson said: “We will now push on with the remaining portion of our flight test programme, which will see the rocket motor burn for longer and VSS Unity fly still faster and higher.”

The company intends to put its first paying space tourists into orbit in 2019 following these further flight tests.