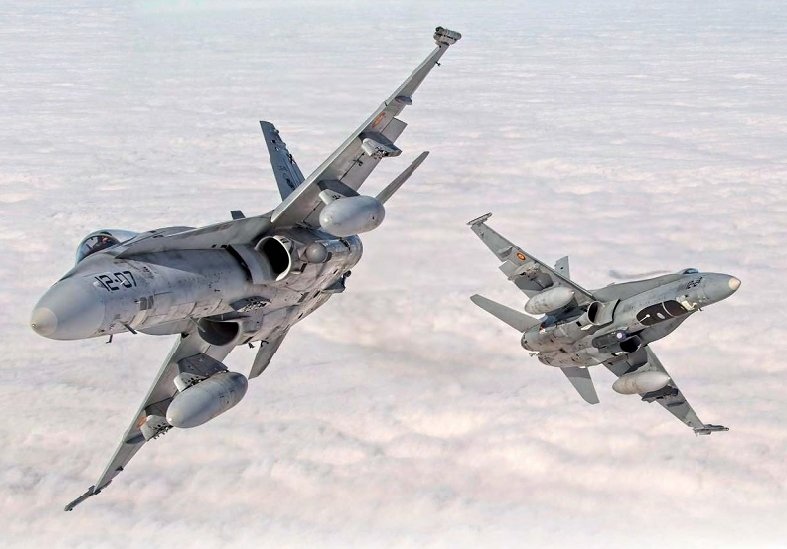 Eagle Eye is one of the most important exercises of its type organized annually by Spain, since it involves participation and coordination of units and weapon systems from all branches of the military. Two Ala 12 EF-18Ms break away after intercepting and identifying a C295 transport aircraft.

One such exercise is called Eagle Eye and is undertaken under the direction of the Mando de Defensa y Operaciones Aéreas (MDOA, Air Operations and Defence Command).

MDOA is in charge of planning and conducting the mission of surveillance, security, control and air policing of Spanish sovereign air space and areas of national interest and responsibility. Eagle Eye lasts for a week and involves participation of not only EA fighter units but also units from the Ejército de Tierra (ET, Army Aviation) and the Armada (Navy) with the objectives of combining synergies and maximizing training for units.

During the course of 2018 three large Eagle Eye exercises were planned. In some cases, the event was integrated into other important air defence exercises organized by the EA, such as DAPEX.

Eagle Eye 18/01 took place in the southeast of the country (the Gulf of Cadiz) during the month of March, in which the EA activated six Eurofighters from Ala 11 based at Moron de la Frontera Air Base near Seville. Integrated into EE 18/01 was the air defence exercise DAPEX 18/01, which involved participation of Ala 14 Eurofighters from Albacete and a KC-130H Hercules from Ala 31 at Zaragoza providing in-flight refuelling. Malaga Air Base hosted a deployment of 12 EF-18M Hornets from their bases at Torrejón and Zaragoza, one aeromedical evacuation C295M belonging to Ala 35 at Getafe, an AS332B Super Puma helicopter serving with 803 Escuadrón at Cuatro Vientos, three CASA C-101s from Ala 74 based in Salamanca, ET anti-aircraft artillery units, and a frigate from the Armada.

The operational phase of EE 18/02 took place between September 24-28, which coincided with DAPEX 18/02. For this event, the exercise area was a wide zone of the Bay of Biscay in the north of the country. Apart from the Ejercito de Tierra anti-aircraft artillery units and a frigate from the Armada, the EA provided six EF-18Ms from Ala 15 operating from Zaragoza.

Lastly EE 18/03 was held between December 10 and 14 with EA participation involving the activation of six EF-18M Hornets from Ala 12 operating from their home base at Torrejón de Ardoz.

There was a similar execution for all three of the Eagle Eye exercises planned for 2018, with the only variations being the specific training areas. Using a fictitious scenario, defensive counter air missions were flown in response to incursions and movements of unidentified aircraft.

Exercise objectives were to evaluate the land, naval and air assets assigned to the MDOA, and improve the procedures needed to integrate the three services (land, air and sea).

On this occasion, the operating area assigned to the exercise was in the south east of the country, along the coasts of Alicante and Murcia. Part of the scenario involved the destruction of a radar system operated by Escuadrón de Vigilancia Aérea No.5 (EVA 5, aerial surveillance squadron) located in Alcoy, Alicante, and the subsequent rapid activation of a mobile radar belonging to Grupo Móvil de Control Aéreo (GRUMOCA, Mobile Air Control Group).

The GRUMOCA is a rapid reaction air force unit charged with deploying and operating the necessary command, control and communications systems needed to support air operations. Deployment of the mobile radar took place on December 8, along with 70 personnel and the Segundo Escuadrón de Apoyo al Despliegue Aéreo (SEADA, second air deployment support squadron), which provided support and security forces. One of the specific training objectives of EE 18/03 was to test the GRUMOCA’s capability to deploy and integrate itself into the national Sistema de Mando y Control (SMC, aerial command and control system) for the first time in an exercise of this type. 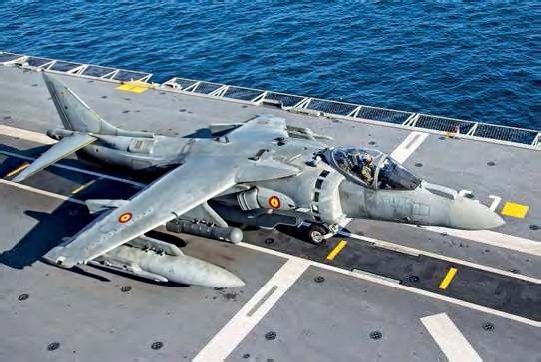 Positioned on the flight deck tram line of the Juan Carlos I amphibious assault ship, an AV-8B+ Harrier Plus prepares to take offfor an offensive counter air mission. 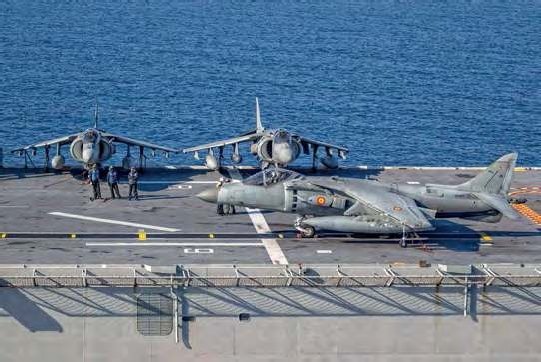 Positioned on the flight deck tram line of the Juan Carlos I amphibious assault ship, an AV-8B+ Harrier Plus prepares to take offfor an offensive counter air mission.

Other forces from the MDOA integrated into the SMC included an ET anti-air defence unit (Unidad de Defensa Anti Aérea, UDAA) deployed to the province of Alicante, made up of various missile batteries; NASAMS, Mistral, Hawk and 35/90 cannons, as well as the corresponding communications unit tasked with guaranteeing the linking and integration of the UDAA into the SMC. This unit included a force protection element made up of an infantry company: in total almost 400 ET personnel participated.

For its part, the Armada deployed the frigate Álvaro de Bazán (F101) in the anti-aircraft warfare role using the Aegis combat system and the SPY-1 radar.

A naval air controller undertook air control from the frigate while integrated into the SMC. At the request of the Armada, amphibious assault ship Juan Carlos I was underway in the Mediterranean simulating the opposing forces of a fictional aggressor nation. Operating from its flight deck were six AV-8B Harrier strike aircraft from 9 Escuadrilla and two SH-3D Sea King assigned to 5 Escuadrilla in the CSAR role.

Other EA aircraft supported the exercise as the Red force; Eurofighters from Morón and Albacete, EF-18Ms and KC-130H Hercules from Zaragoza and CASA C-101s from Salamanca. With these assets the Red force staged various combined air operations, which the six EF-18Ms assigned to the Blue force had to defend against.

Two independent command and control cells were activated at the Mando Aéreo de Combate (MACOM, Air Combat Command) Operations Centre at Torrejon Air Base; each was tasked with controlling the respective Red and Blue force. Under this order of battle, the Blue force maintained a 24/7 alert status to respond against attacks staged by the Red force.

With slight variation, the sequence of each mission followed a similar order: once enemy tracks were detected by the Blue force SMC, the EF-18Ms from Torrejon were launched to intercept. After the ensuing air combat, Red force aircraft simulated breaking through the defensive barrier and continued on to attack the frigate, which then defended itself by its own means. After strikes on the frigate, Red force fighters penetrated Spanish territory and attacked the UDAA, which had to defend itself with the missile and cannon batteries.

One hundred sorties were flown during the three days of air operations, in which the EA SMC and the air defence assets of all three services had the opportunity to test their capability to respond to threats and integrate together.

Spain’s annual air defence exercises are planned to achieve improved synchronization between the various units in order to defend the national air space and territorial waters 24/7 for 365 days per year. A series of Eagle Eye exercises are already being planned for 2019 located in areas around the country in order to cover all of Spain’s sovereign airspace. 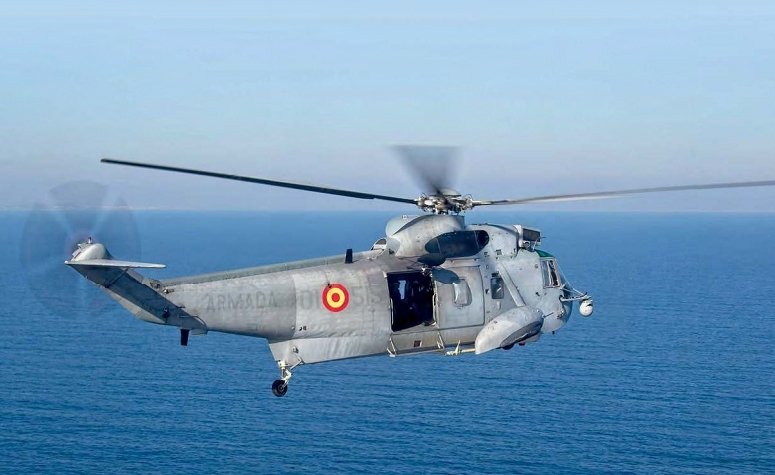 One of the two SH-3Ds assigned to 5 Escuadrilla that undertook various transport and CSAR missions during Eagle Eye 18/03.