Welcome to the start of a new series in which we put the spotlight on well-known military aircraft. Each instalment will include a brief history, a survey of the flight simulations currently available for that type, how each product compares in terms of its internal and external graphical representation, cockpit functionality, systems modelling, flight dynamics and audio treatment. Additional features such as liveries and, where applicable, flyable missions will be discussed. In addition, we will be providing hints and tips on how best to operate and fly each aircraft. So to get this series off to a flying start, we begin with the iconic Vickers Supermarine Spitfire, which will be presented in two parts. In this instalment, we will first give a brief description of and differences between the various Marks of Spitfires that have been modelled by the developers in this survey, and then give an overview of their respective features. 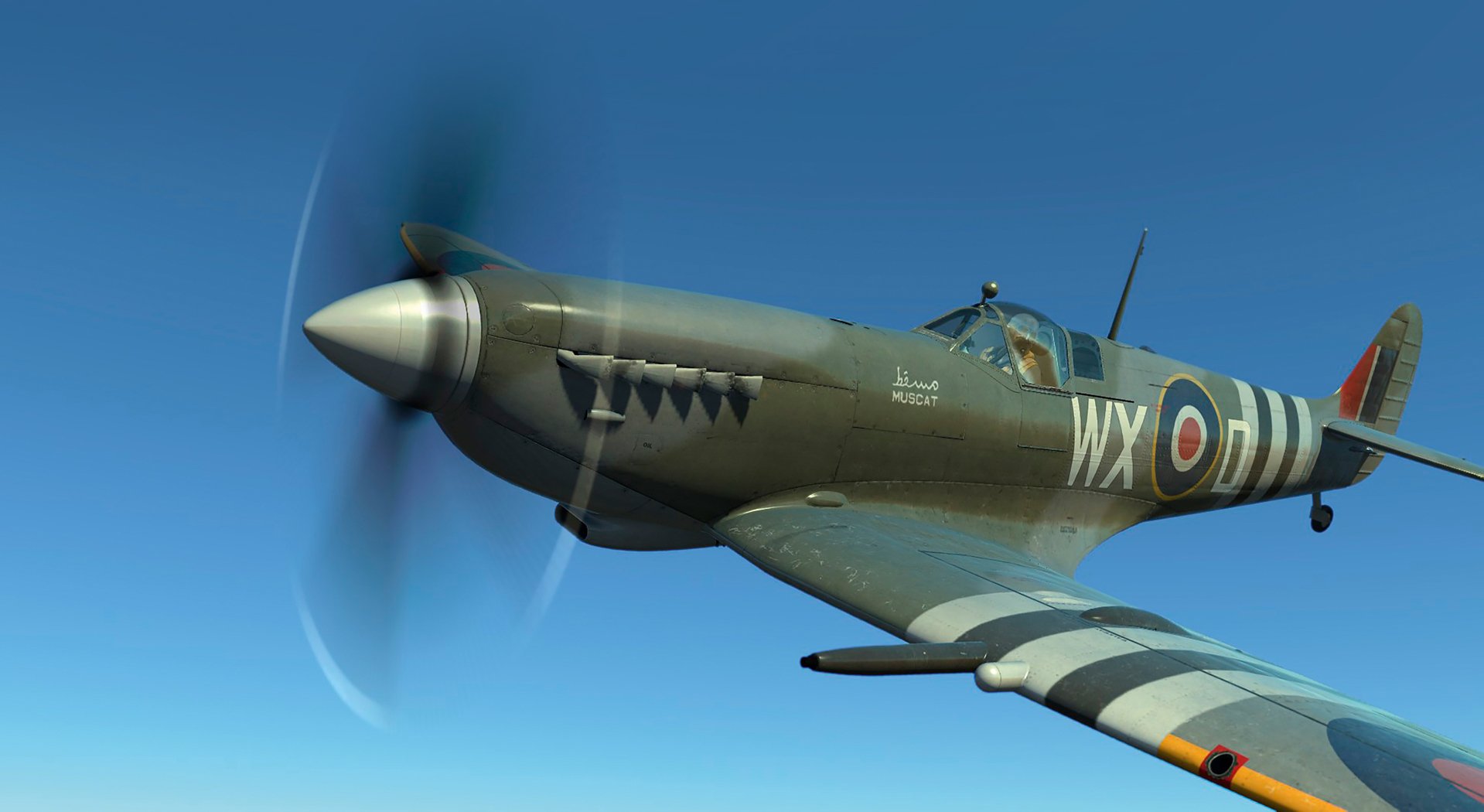 An introduction to the Spitfire

‘You didn’t get into a Spitfire, you strapped it on!’, ‘She was a delight to fly’, ‘It was an honest, viceless aircraft’, ‘It spoke to you, and would give you due warning if it was being abused!’ These are just some of the compliments that have been paid to the Spitfire by veteran pilots when describing Reginald Mitchell’s masterpiece. First flown in March 1936, it was designed as a short- range defensive fighter for rapid interception of raiding fighters and bombers. When production of this aircraft finally ceased in 1949, a total of 22,000 Spitfires and Seafires had been built. In fact it was the only British fighter to have been in continuous production before, during and after the war - with a total of 24 different Marks of Spitfire being ultimately produced.

In this feature we will be focusing on the following Spitfire simulations: A2A Simulations’ Mk I and II, Aeroplane Heaven’s Mk Ia, Eagle Dynamics’ DCS Spitfire LF Mk IX, 1C Maddox’s Cliffs of Dover Spitfire Mk I and II and finally Real Air Sims’ Mk IX and XIV from their Spitfire 2008 package. At this point, it should be pointed out that although Real Air Sims is no longer trading, I felt it was worthwhile including its product in this article for the benefit of those who still own this simulation to see how it compared with the more recent Spitfire offerings. Furthermore, new installers for a number of Real Air’s products are available on their website (realairsimulations.net/) that, it states, will “allow you to continue using your Real Air products going into the future.”

As you can see, the companies mentioned above have modelled different versions of the Spitfire. So, with that in mind, it will prove useful to now give a brief description of the main technical specifications of each of the Marks involved, starting with the Mark I.

The Mark I, modelled by A2A Simulations, Aeroplane Heaven and 1C Maddox in Cliffs of Dover, was the first production version of the Spitfire and entered RAF service with numbers 19 and 66 Squadrons in 1938. Powered by a Merlin II engine, which produced 1,030hp at 16,250ft, it had a top speed of 347mph. It also had a three-bladed variable pitch propeller which replaced the original fixed pitch unit.

The Spitfire Mark II is simulated by A2A and is included in Cliffs of Dover. Although externally the Mk II was virtually identical to the Mk I, the most significant difference between them was the engine. The Mk II incorporated the Merlin XII engine, delivering 1,175hp, which gave a small increase in speed over the Mark I. As a result, the Mark II had an improved maximum speed and rate of climb over its predecessor.

Spitfire Mk IX The Mark IX, modelled by Eagle Dynamics and Real Air Simulations, was designed as an interim version to combat the Focke Wulf Fw190. The Mk IX came in three flavours, designed for low and high altitude: the F.IX was powered by a Merlin 61 producing 1,565hp, the HF.IX had a Merlin 70 engine, which produced 1,710hp and finally the LF.IX came with a Merlin 66 producing 1,720hp. In terms of performance, the F.IX’s maximum speed was 408mph at 25,000ft, the LF.IX’s top speed was 404mph at 21,000ft and the HF.IX could attain a speed of 416mph at 27,000ft.

Finally, the Mark XIV, represented by Real Air’s Spitfire, was powered by the Griffon 65 engine that produced 2,000hp. The Mark XIV’s top speed was 448mph at 26,000ft. Characteristic features included: a five-bladed propeller and enlarged fin and rudder. It also came with either a ‘high-back’ or cut-down rear- fuselage, the latter of which was designed to allow for the incorporation of the tear-drop canopy, which improved all-round visibility.

Now that we know a little about the differences between the Marks of Spitfire which have been modelled, let’s take a look at the main features of their simulated counterparts, starting with Aeroplane Heaven’s ‘Dunkirk Spitfire’.

Aeroplane Heaven’s Dunkirk Spitfire package for FSX and Prepar3D provides three models comprising a very early Mk I with the two-bladed Watts propeller and flat- top canopy, a Mk I which was in service at the time of Dunkirk in 1940 and a Mk IA which took part in the Battle of Britain. Early Mk Is were originally fitted with a two- blade, fixed pitch, wooden propeller but in 1939 this was replaced with a three-bladed metal variable-pitch airscrew. Early Mk Is were also fitted with a hand-pump-operated landing gear system. A distinguishing feature of the Mk IA was its larger ‘bubble’ canopy, designed for increased head clearance.

This model also includes animations comprising: ‘safety’ stage door opening (which locks the canopy in the open position when landing), the Mk I hand-pumped landing gear, which is correctly simulated (30 pumps to lower, 15 to raise) and the later hydraulically- operated landing gear, animated goggles and oxygen mask (automatically set at altitude), ‘shake’ of airframe at engine start and idle, and an authentic engine start. In addition, the surface detail on these models includes individual rivets and fabric effects and a high- definition texture set, complete with weather and wear effects. Finally, nine liveries are supplied for the included Spitfire variants. 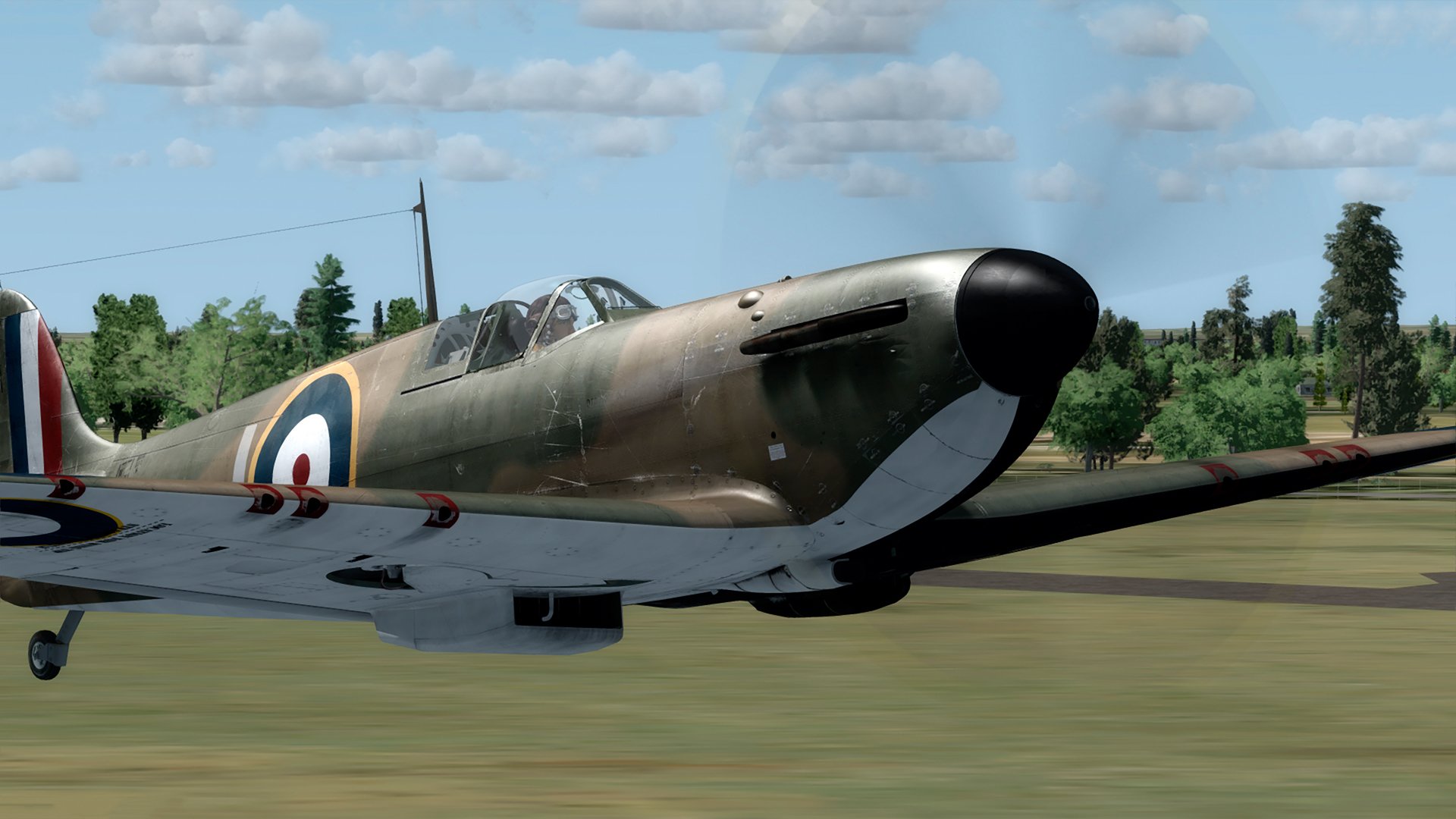 A2A Simulations has modelled Spitfire Marks IA, IIA and IIB. With this product, A2A adopted a new approach in the way it created its simulations, with the ultimate goal of increasing the level of fidelity currently available. The team achieved this goal by effectively designing its Spitfire ‘outside’ of FSX, thereby bypassing the confines and limitations of the host software. This approach allowed A2A to produce a product that took desktop simulation to a whole new level of fidelity.

Features in this package include a choice of three types of propeller (two-blade fixed pitch, three-bladed two-speed variable and a three- bladed constant speed) and full modelling of the piston combustion engine technology of the Rolls Royce Merlin encompassing features such as electric and explosive engine starters and the effects of overheating and spark plugs getting clogged. The oil pressure system is modelled, along with oil viscosity and the effects of oil temperature and dilution on the engine; dynamic systems failures along with the primer system are also included, with the prevailing ambient temperatures affecting the number of shots required. A2A’s Spitfire also provides the authentic simulation of the battery, the capacity of which is affected by temperature and lowers over time and degree of usage. Other notable features include a fully clickable and functional cockpit, a complete maintenance hangar, allowing you to view the current state of your aircraft, its engine and various systems (and affect repairs and tests if required), plus a completely audible cockpit and engine system. Sound is dynamic and is driven by physics rather than being event-triggered, with 300 sound samples utilised. Finally, your Spitfire is a ‘persistent’ aircraft which means its prevailing condition is carried over to your next flying session. So, for example, if you made a rather heavy maintenance hangar the next day may reveal repairs that are needed on your undercarriage. 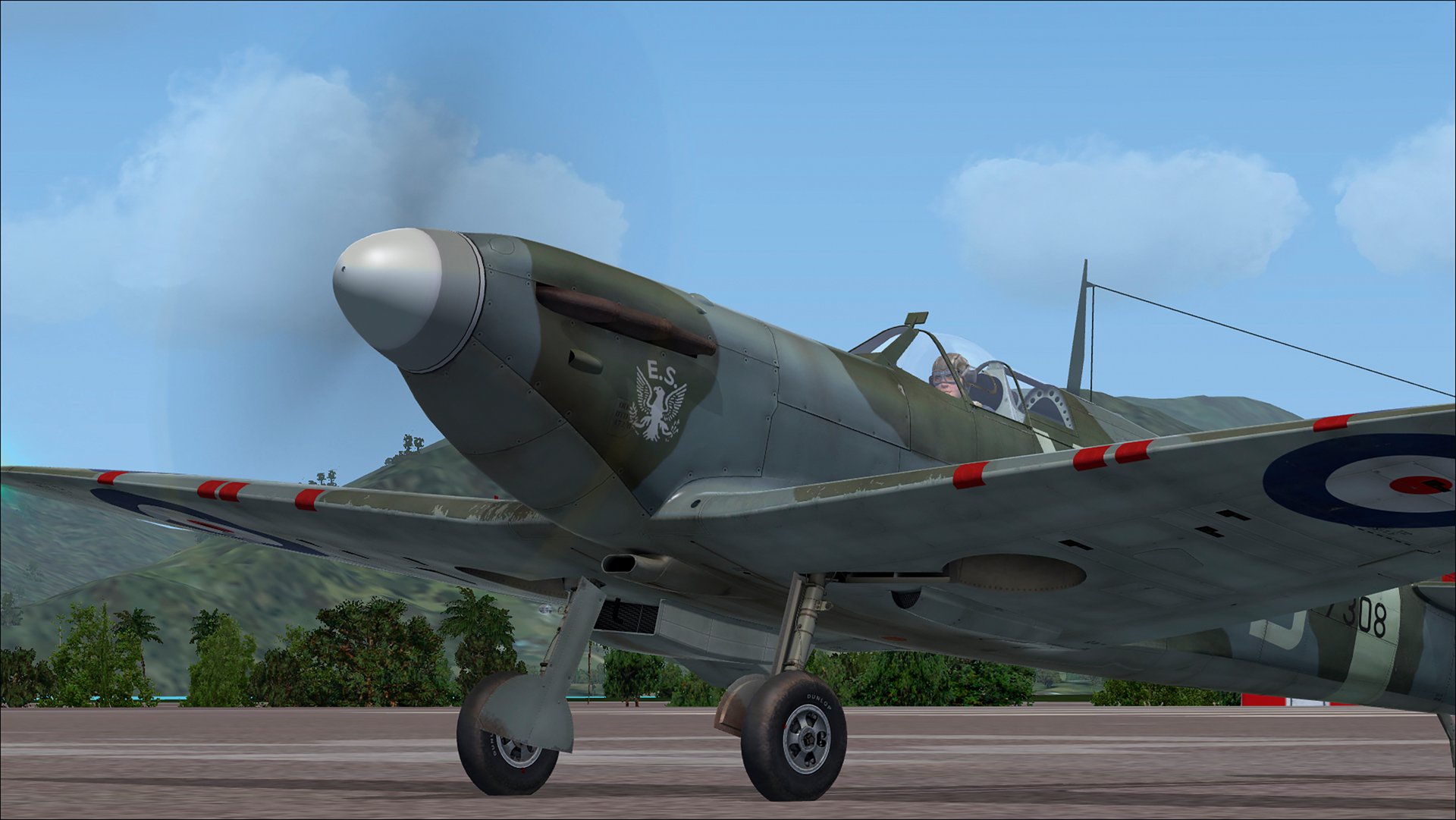 Eagle Dynamics (ED) decided to model the most produced variant of the Spitfire series: the Spitfire LF Mk IX. ED has used data from scientific research and documentation, as well as consultation and tests conducted by real world pilots of the Fighter Collection, ED’s parent company, based in Duxford, England. As well as providing high-fidelity flight, engine, fuel and electrical systems modelling, it also includes a fully functional cockpit, armament, radio operation and gunsight use. ED also provides you with a number of scenarios in which to experience the Spitfire:

The former two come with the module, while the latter are available as additional purchases in the form of ‘Operation Epsom’ and ‘The Big Show Campaign’. ED’s Mark LF IX also comes with eight liveries covering four British and four Russian aircraft. 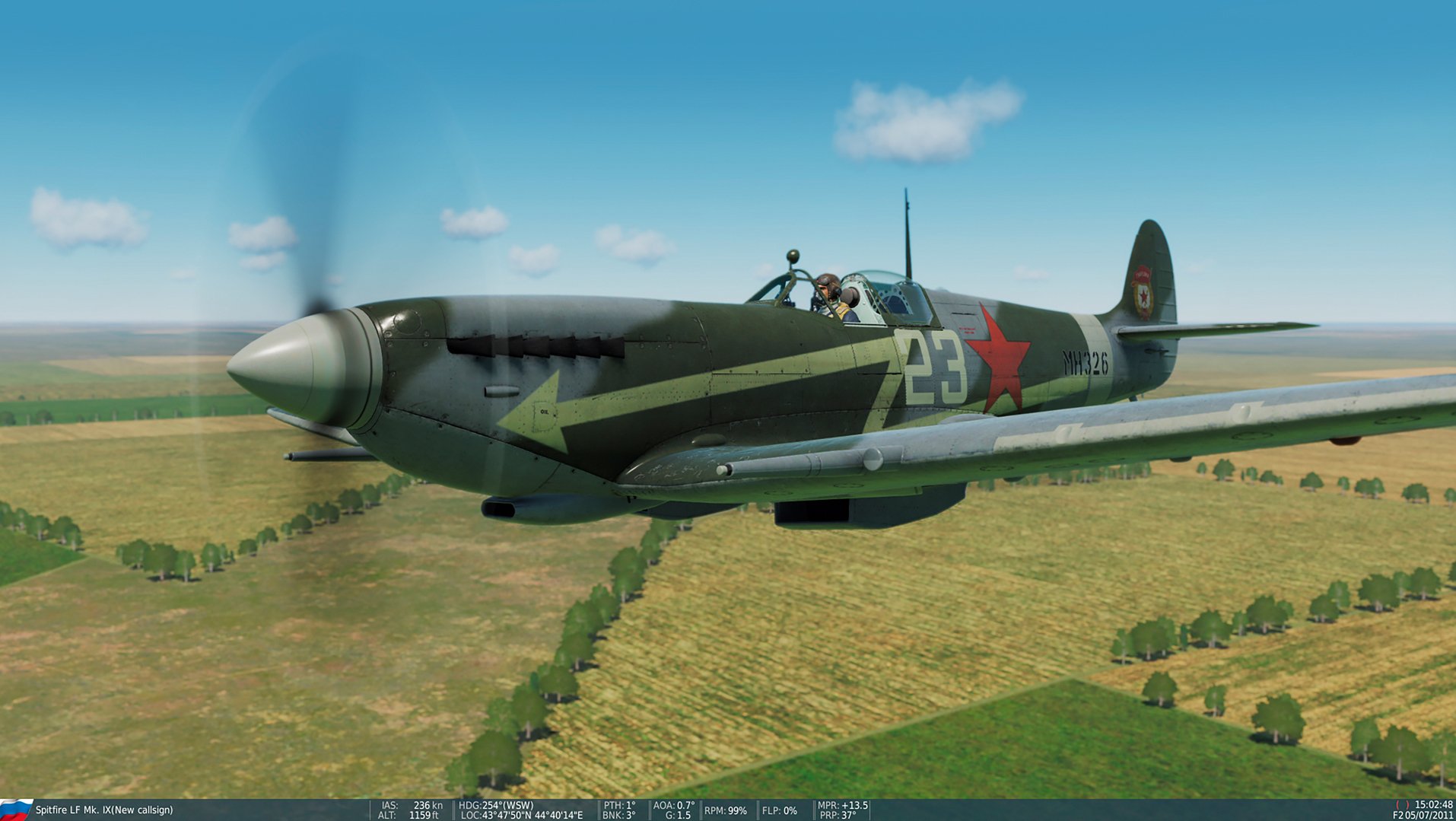 Cliffs of Dover Spitfire (Mk I and II)

Reflecting the Marks of Spitfire that took part in the Battle of Britain, IL-2 Sturmovik: Cliffs of Dover (CoD) includes three versions of the aircraft: the Mk I, Mk IA and the Mk IIA. An additional ‘Mk IA October’ is also included but there seems to be no apparent difference between this aircraft and the standard Mk 1A.

As mentioned previously, the Mk I was fitted with a Merlin II or III engine, while the Mk II was powered by the more powerful Merlin XII, which markedly improved the aircraft’s performance; this being apparent when flying in the simulation. Another important factor which affected the performance of the Spitfire was the type of propeller fitted to the aircraft. CoD includes Spitfires with two types of propellers. The first is the three-bladed - two-pitch (for fine and course) variant used on the Mk I, with the ‘fine’ pitch setting used for take-off and the coarse pitch for high- speed cruise; but both have to be manually set. The Mk IA, ‘Mk IA October’ and IIA are all equipped with the constant-speed propeller, which, in essence, automatically sets the correct pitch angle for any given speed. The latter propeller improved the Spitfire’s rates of acceleration and climb.

CoD’s Spitfire also comes with a fairly high degree of cockpit functionality but not as comprehensive as the previous two offerings. The features lacking are the ability to manually operate both the Primer and the Starter button. 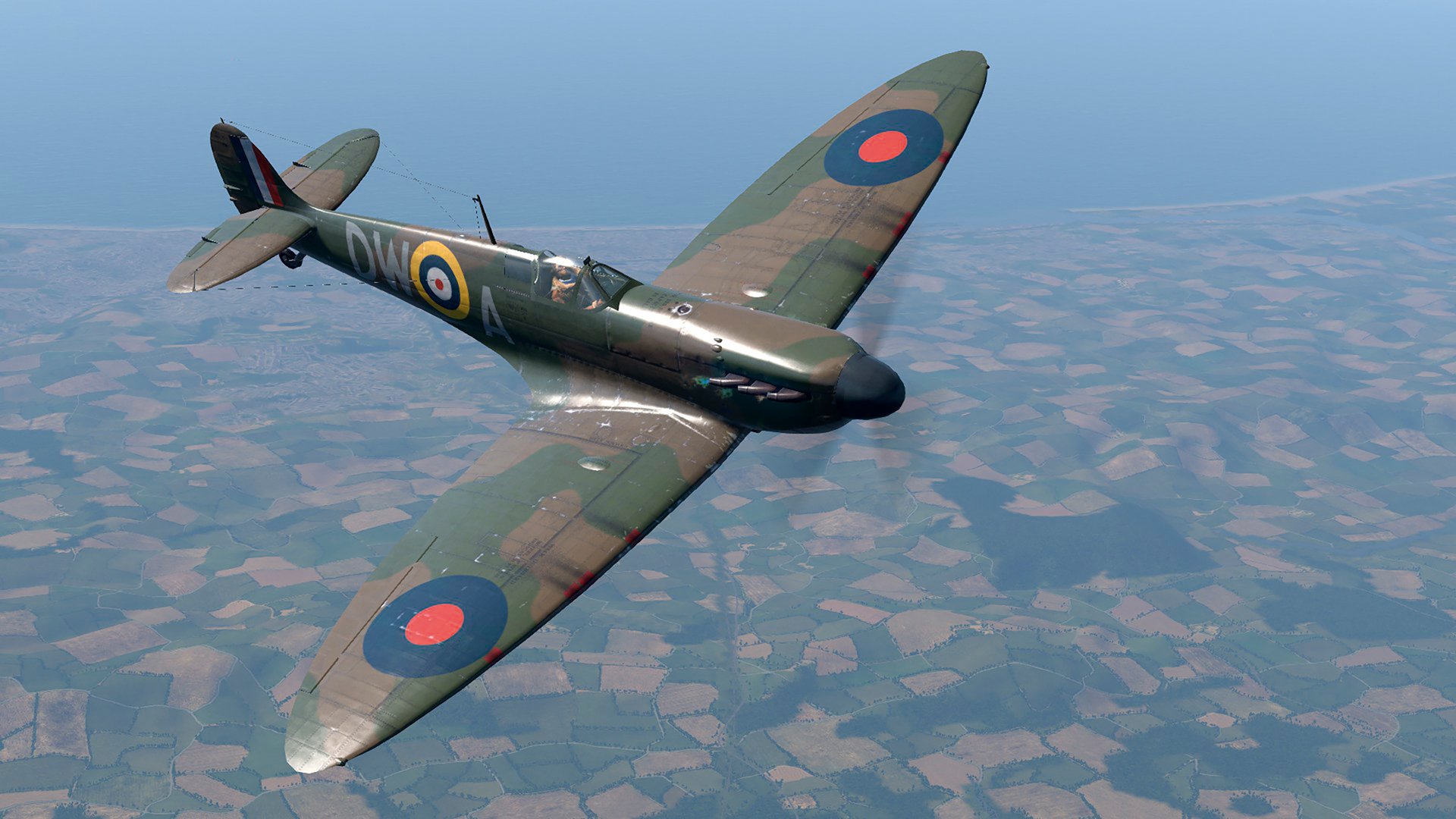 IL-2 Sturmovik: Cliffs of Dover includes three versions of the aircraft: the Mk I, Mk IA and the Mk IIA.

RealAir Sims’ ‘Spitfire 2008’ package models the Mk IX and Mk XIV variants and both versions are accompanied by sub- variants and a variety of liveries. As an added bonus, a reproduction of RAF West Malling airbase (circa 1944), complete with AI-controlled Spitfires, is also included.

Spitfire 2008 provides the following number of livery variations: six Mark IXs with elliptical wings, four Mark IXs with clipped wings, four Mark XIVs with elliptical wings, six Mark XIVs with clipped wings and one ‘Contra Prop’ Mark XIV. Features include: Virtual Cockpit (VC) glass reflections, visible and audible pre- and post-stall buffeting, a refined spinning routine allowing you to continue a spin once established, airframe overstress sound effects, high-speed (high-g) stalls, realistic engine torque effects, engine failure (which is portrayed both visually and mechanically), a choice of textures between 16-bit or the higher quality 32-bit variety (the latter improving the look and appearance of the external modelling of the aircraft), and finally, the user can control the strength of the stall buffeting effect. 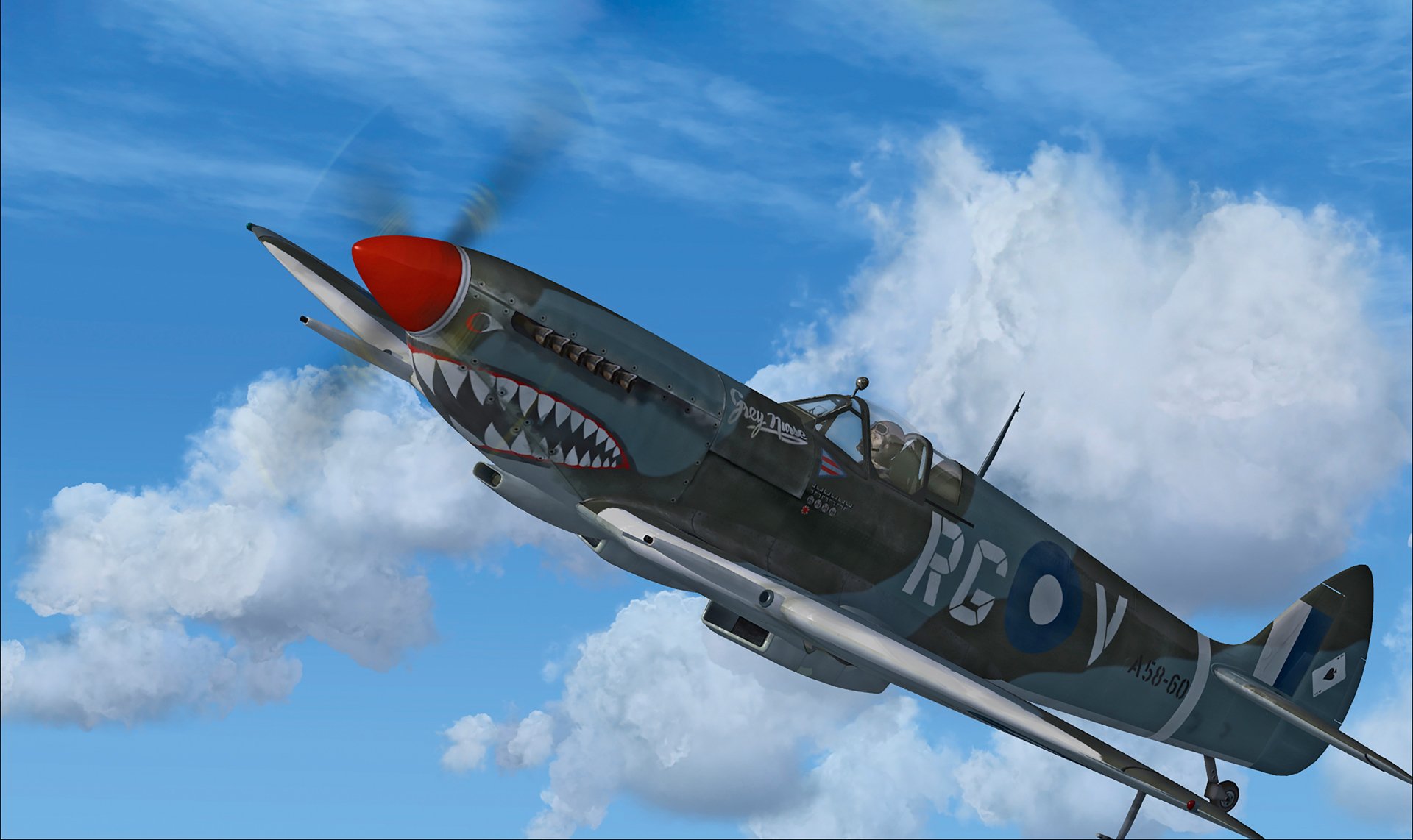 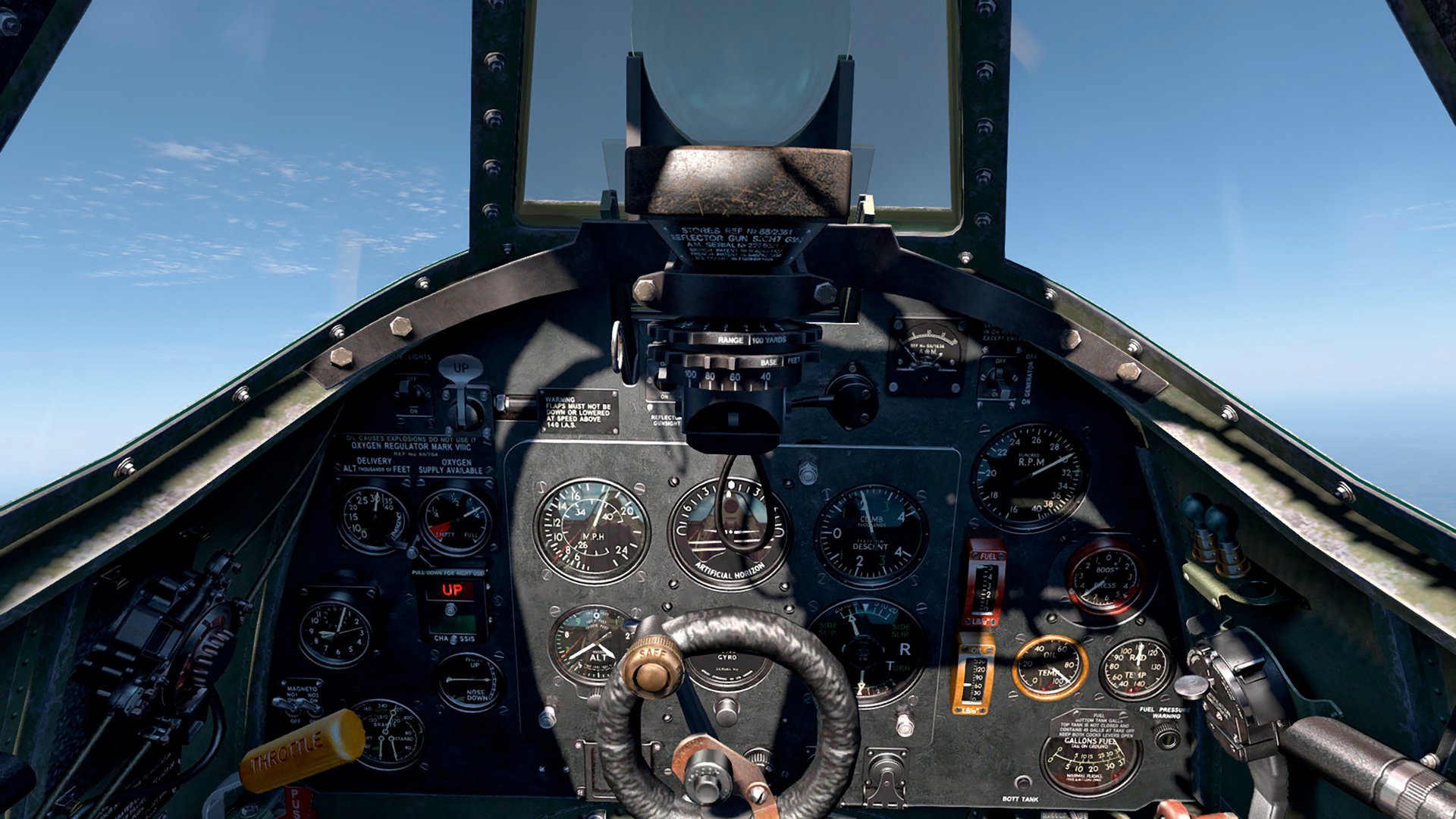 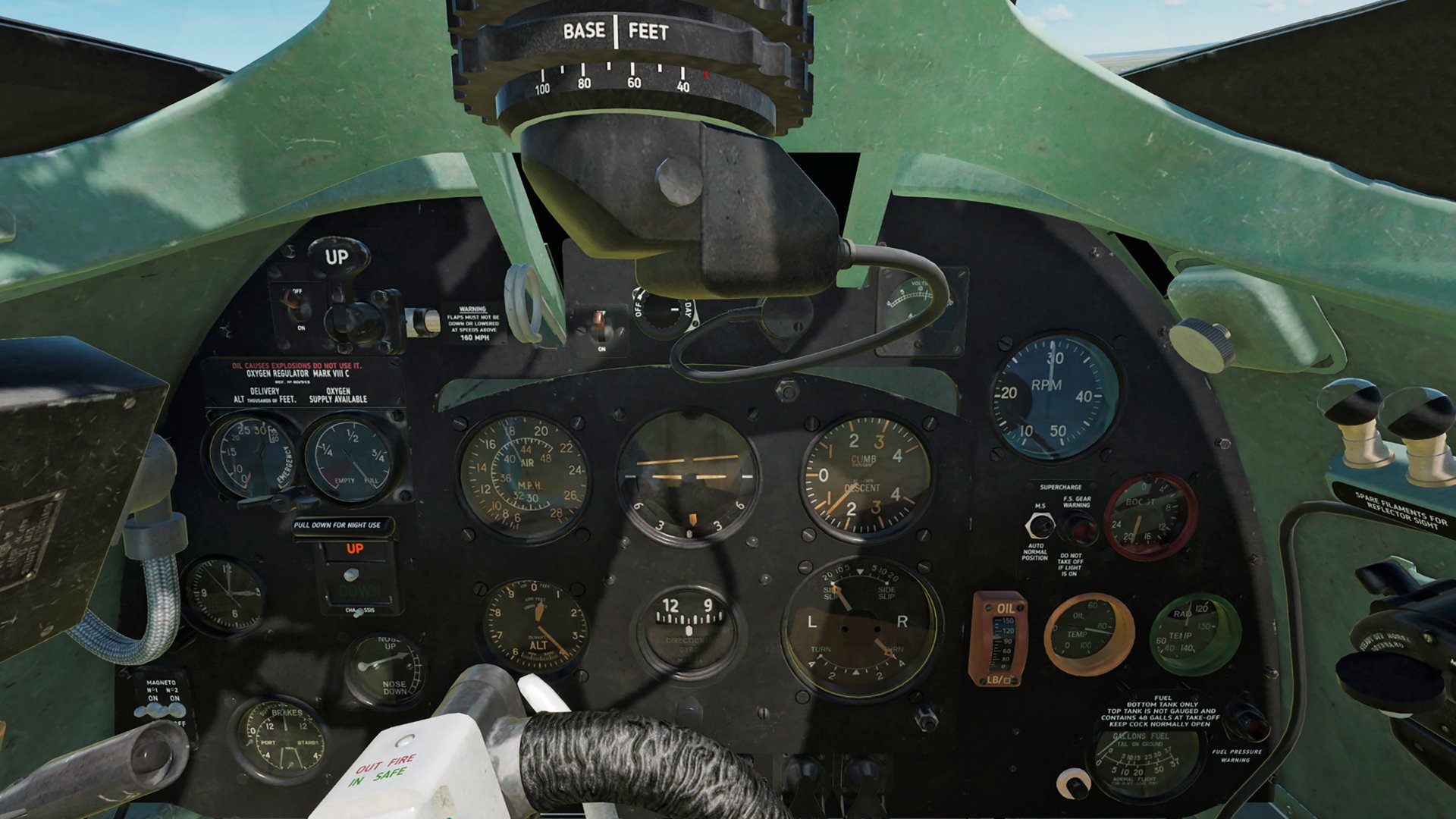 Now that we have established the essential ‘ingredients’ of each of the featured Spitfire simulations, the next instalment will take a look at their respective graphical treatments (internal and external), compare their individual flying characteristics and how well each of them has replicated the magical sounds of the Merlin and Griffon engines. So until next time, happy flight simming!