In this instalment we will compare their respective graphical treatments (internal and external), individual flying characteristics and how well each simulation has replicated their real-world counterpart.

In comparing the five packages under discussion, one of the most striking visual differences can be seen in the rendition of the various cockpits. The Spitfire’s cockpit has its own unique ambience and character, with its design and layout being typical of the period. So let’s take a look at how this area has been treated in each of these renditions.

Although comparatively sparse in the cockpit area and despite its age, RealAir Sim’s portrayal of the Spitfire’s instrument panel holds up well when compared to the other renditions. The instrumentation is pin-sharp and subtle use of dust and wear and tear is also in evidence. 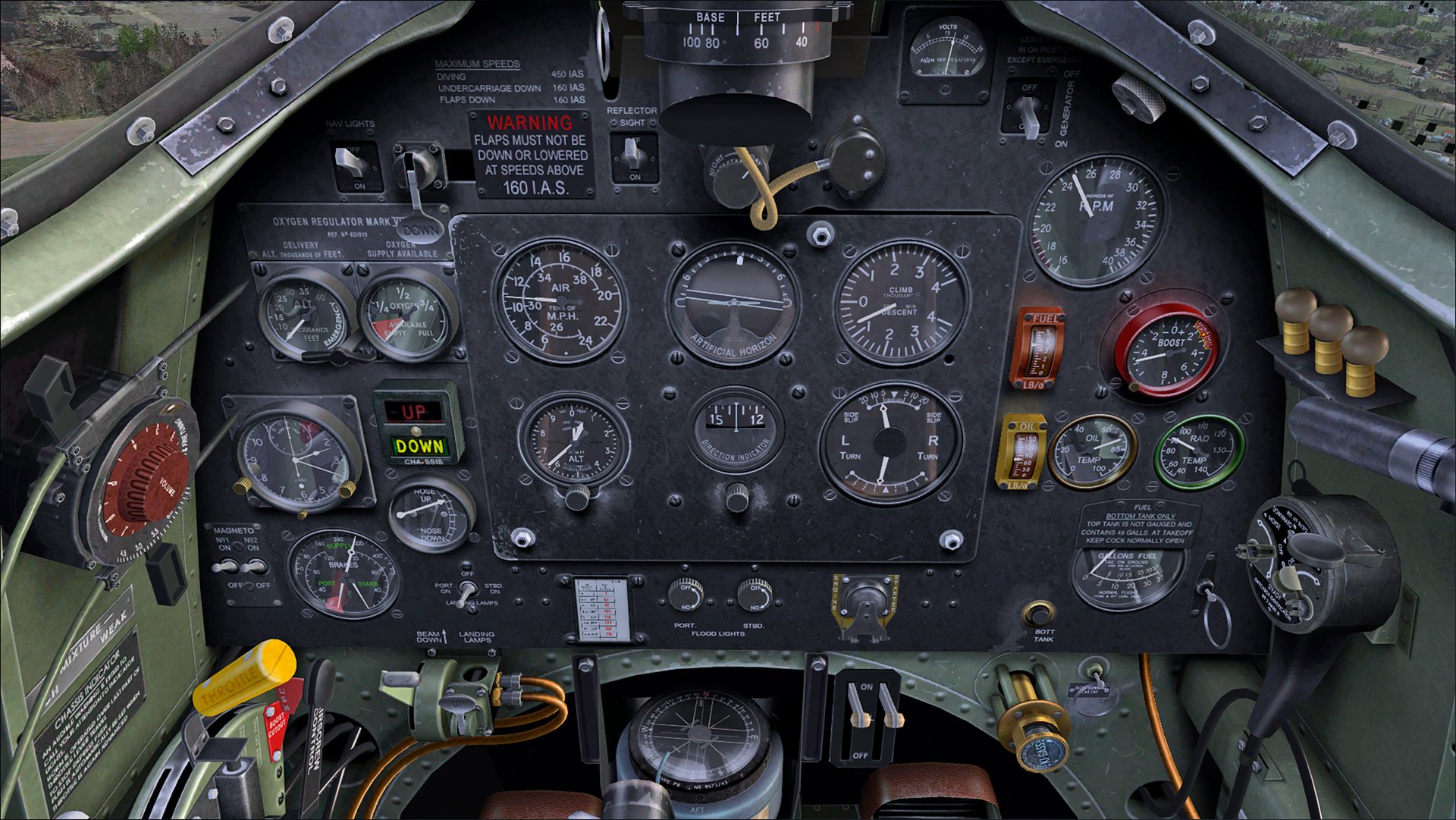 A2A’s attention to detail is evident in this cockpit shot of their Spitfire Mk II.

Aeroplane Heaven’s representation is also good but I feel it perhaps lacks the finesse of some of the other offerings. Personally, I think the top three representations of the instrument panel are those in the A2A, DCS and Cliffs of Dover models but I have to admit to finding it difficult to separate these three. They all do a fine job of portraying the glass instruments and the various other details within the cockpit area, with the Cliffs of Dover’s panel having a touch more ‘atmosphere’ than the others. The most distinguishing element that separates these five simulations, however, relates to the tones and colours that have been used to portray the main panel. In this respect, the DCS depiction is probably the most faithful representation when compared to its real-world counterpart.

When it comes to cockpit interactivity and systems modelling, the two most complete simulators in this regard are the A2A and DCS Spitfires, which provide the most functionality.

What sets the A2A and DCS models apart from the others is that the systems and mechanisms underpinning each gauge, which permits them to work, have been simulated. Adopting this approach has allowed the developers to create Spitfire cockpits that are virtually fully functional. As a consequence, as in the real aircraft, the A2A and DCS Spitfires require you to pay constant attention to those systems.

This is necessary because any number of changing conditions occurring inside and outside of the aircraft could have an impact on those systems. The Spitfire’s main systems can be divided into four categories: fuel, oil, hydraulic, pneumatic and electrical. Depletion, overheating or damage to any of those systems in these two models will have a direct impact on their related components and ultimately on the aircraft’s performance. 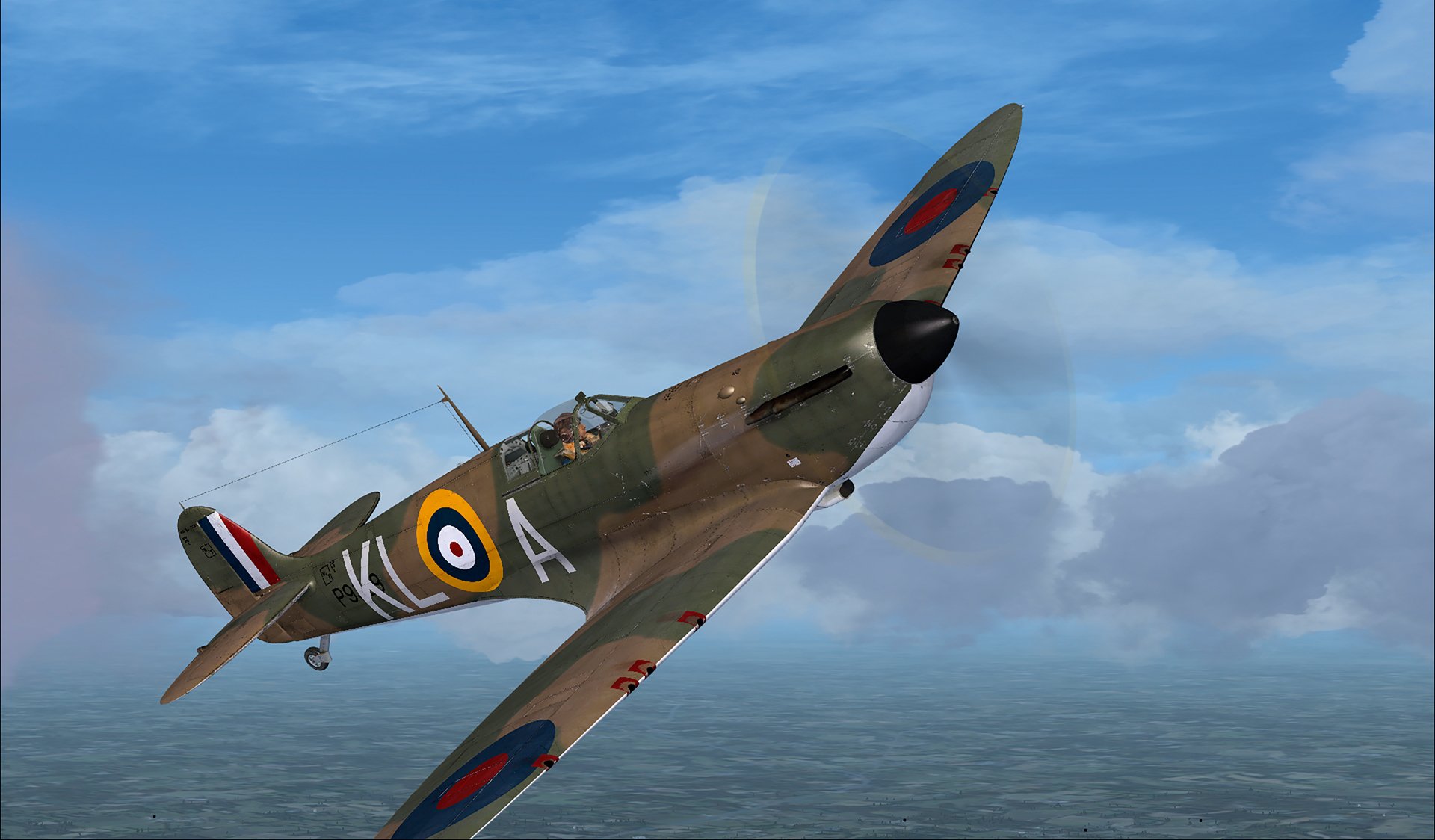 Aeroplane Heaven’s Spitfire, although of a good standard, appears to be the least polished.

When it comes to the external graphics, I must say I still think RealAir Sim’s renditions of the Spitfire Mk IX and XIV are still impressive, even after all these years, which is a testament to the skill of the developers and their attention to detail. As far as the other simulators are concerned, Aeroplane Heaven’s Spitfire, although of a good standard, appears to be the least polished, while DCS’ model is the most realistic-looking, being almost photorealistic in appearance. It even portrays the subtle rippling effect seen on the Spitfire’s metal skin which is most evident on the surface of the wings. Cliffs of Dover’s external modelling of the Mark I/II Spitfire is an excellent representation, although I feel that the rivets are a little too pronounced in certain areas. However, from an external perspective, of the four Spitfires that have been designed for FSX/Prepar3D in this survey, I feel that A2A’s representation is the most authentic-looking. 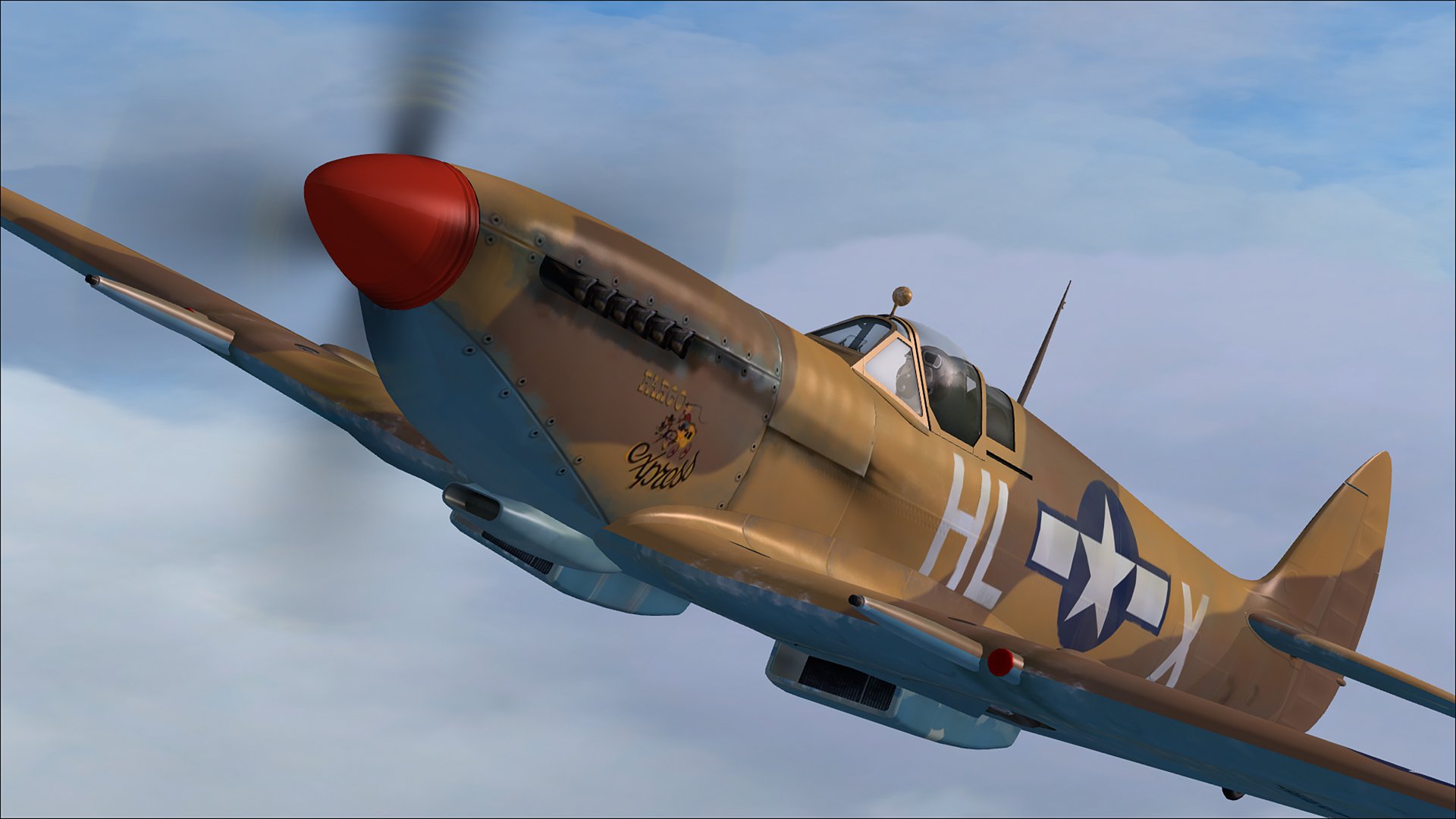 Despite its age, RealAir Sim’s rendition of the Spitfire Mk IX is still impressive.

Like people, aircraft have their own unique personality traits and the Spitfire is no exception. In fact, there were noticeable changes in all areas of its handling and performance as it was progressively developed over 24 different Marks, with changes being made to its powerplant and overall design. So, with that in mind, let’s take a look at some of those uniquely-Spitfire qualities and see how well they have been replicated by the simulations in this guide.

Probably the first characteristic feature you will encounter when operating the Spitfire is its relative instability on the ground, which is due to its narrow-track undercarriage. This is particularly noticeable when taxiing and landing.

Another Spitfire trait was the pronounced swing of the nose as the throttle was advanced on take-off, which was due to the torque produced by the propeller. One thing to note at this point, given this discussion of both early and late models, is that Merlin-engined Spitfires pulled to the left (viewed from the cockpit) as you advanced the throttle, so right rudder trim and a little right rudder input was required to keep the nose straight. In addition, pilots also had to watch out for a slight left-wing- drop while on take-off, which had to be anticipated by the input of opposite aileron.

Conversely to the Merlin-engined Spitfires, Griffon-engined variants, such as the Mk XIV, tended to swing to the right on take-off, as the propeller rotated in the opposite direction (ie to the left as viewed from the cockpit) and drop the right wing. Therefore left rudder trim and corrective rudder and aileron input was required.

So with the above traits in mind, I found that all of the simulations faithfully modelled the instability of the Spitfire on the ground and the effects of torque on take-off to varying degrees, with the Merlin-engined Spitfires faithfully pulling to the left and the Griffon-engined Mk XIV from RealAir authentically pulling to the right. However, when it came to wing-drop, this was only really noticeable in the A2A, Cliffs of Dover and DCS simulations. 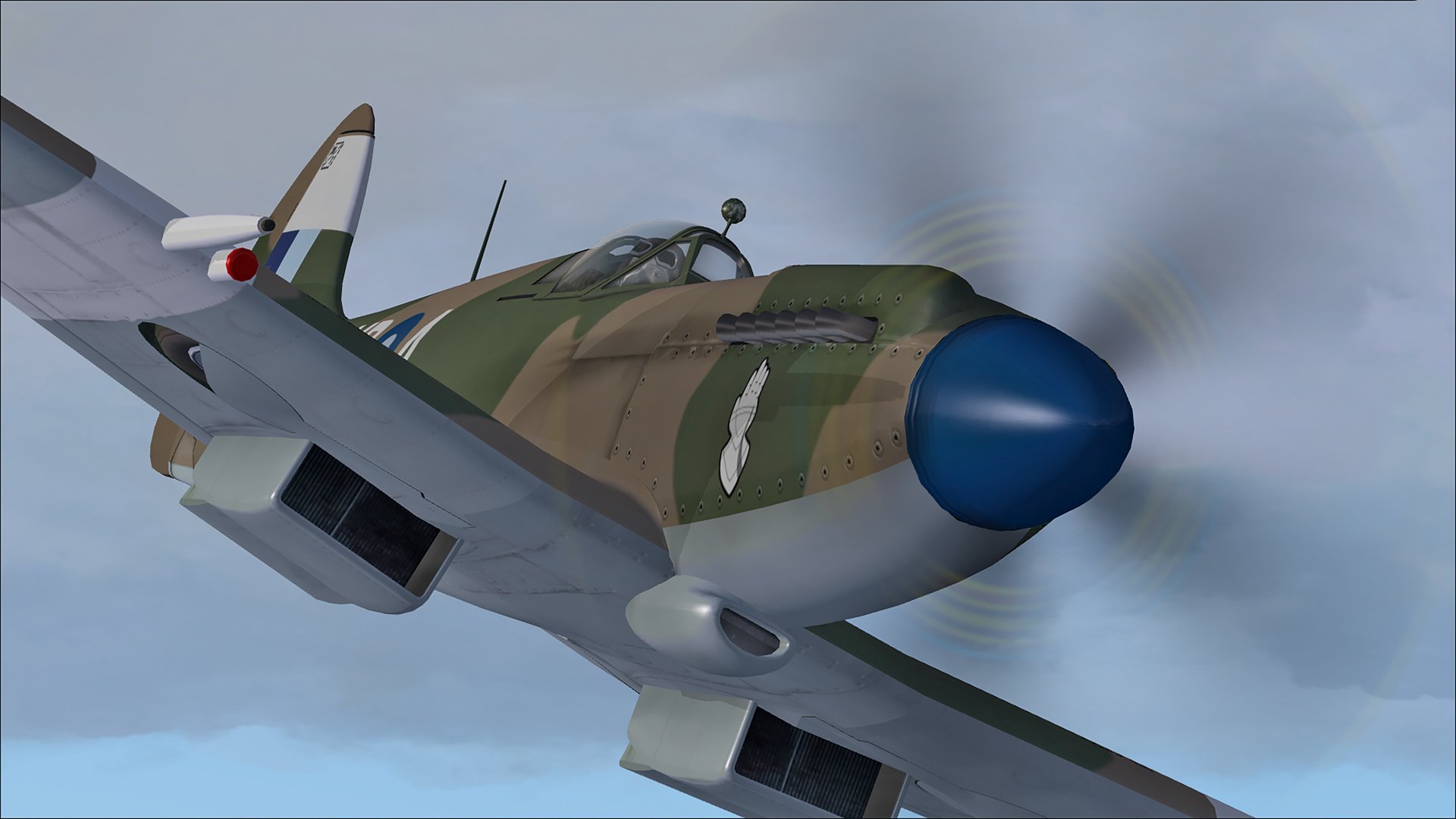 Here we see a shot of RealAir Sim’s Griffon-engined Mk XIV in flight.

Once in the air, the Spitfire revealed her true character. She was light in handling and immediately responsive to control inputs, to the extent that it was often said by Spitfire pilots: “You just had to think what you wanted it to do and she would do it for you.” According to documented accounts, the Spitfire variants in this discussion were fairly stable in normal flight when trimmed out. However, changing the position of the throttle, flaps or undercarriage would result in a change in the trim of the aircraft requiring corrective measures to be taken.

Pilots also found that as speed increased, the ailerons became heavier. However, the ailerons were still effective right down to stall speed. With wheels and flaps deployed and power off, the early Spitfires stalled at around 65mph. Of all its controls, the Spitfire’s elevators were the most powerful and only required minimal input to affect the desired response.

So, how do our selected simulators compare with regard to the Spitfire’s handling qualities?

Well, all were relatively stable in normal flight, to varying degrees. The three FSX/Prepar3D addons from A2A, Aeroplane Heaven and RealAir Sims were inherently the most stable, while the DCS and COD Spitfires being the least. When it came to changes in trim, as a result of movement of the flaps or undercarriage, all exhibited changes in pitch, again to varying degrees, with the Aeroplane Heaven and RealAir models displaying the least variation, followed by the A2A, COD and DCS aircraft respectively. However, changes in the throttle position resulted in a wider variation among the group with the most marked change in trim being seen in the COD and DCS Spitfires.

Of the FSX/Prepar3D Spitfire addons, I felt that the A2A modelling was the most fluid and dynamic in feel, while the COD and DCS models respectively felt more sensitive on the controls. 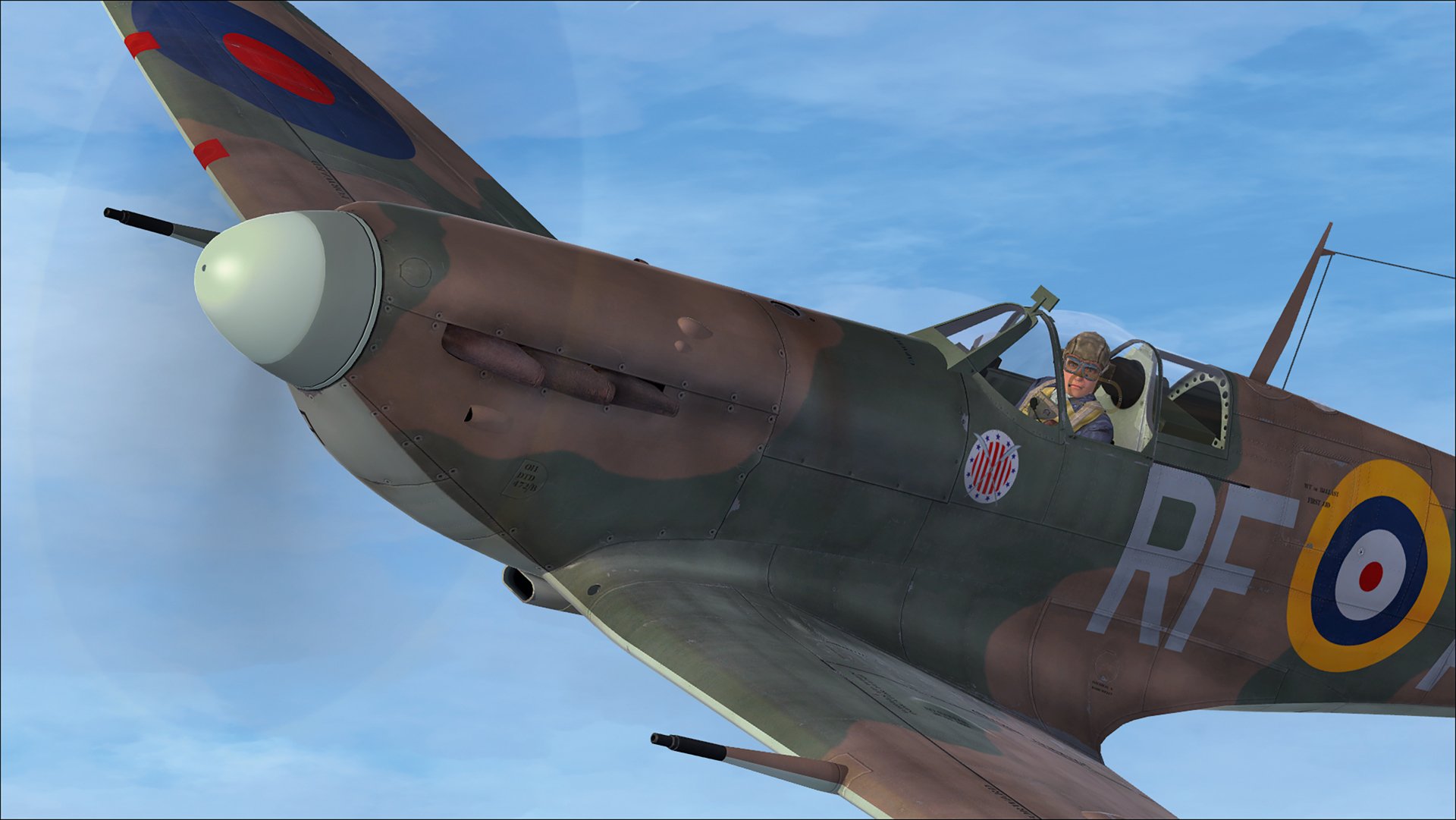 Of the FSX/Prepar3D Spitfire add-ons, I felt that the A2A modelling was the most fluid and dynamic in feel.

When it came to finally landing the Spitfire, that narrow-track undercarriage had a bearing on how well or badly you returned to terra firma.

Due to the Spitfire’s long nose blocking much of the pilot’s forward view, a curved approach is the order of the day to keep the runway in sight for as long as possible. The key to success is to keep your rate of descent and your speed, as you cross the threshold, to a minimum to reduce the chances of a bounce.

You should also make a note of the stall speed, which varied from one Mark of Spitfire to the other. With flaps and undercarriage deployed, the Mk I/II’s stall speed was 65-68mph and for the Mk IX and XIV it was 75-79mph. The most challenging aspect of landing the Spitfire is keeping it straight once your wheels touch the ground. So, having landed, remain vigilant as the Spitfire will invariably begin to swing to the left or right (depending on which Mark of Spitfire you are flying) without warning - due to torque and its narrow-track undercarriage.

So you need to anticipate this with opposite rudder and perhaps a dab of brakes.

In this regard, the Aeroplane Heaven and RealAir Spitfires were the easiest to land, followed respectively by the A2A, COD and DCS versions. The DCS Spitfire was the most difficult to master when it came to landing.

Often I would manage to land successfully but as mentioned previously, the aircraft would swing to the left without warning, invariably dropping the trailing wing in the process. 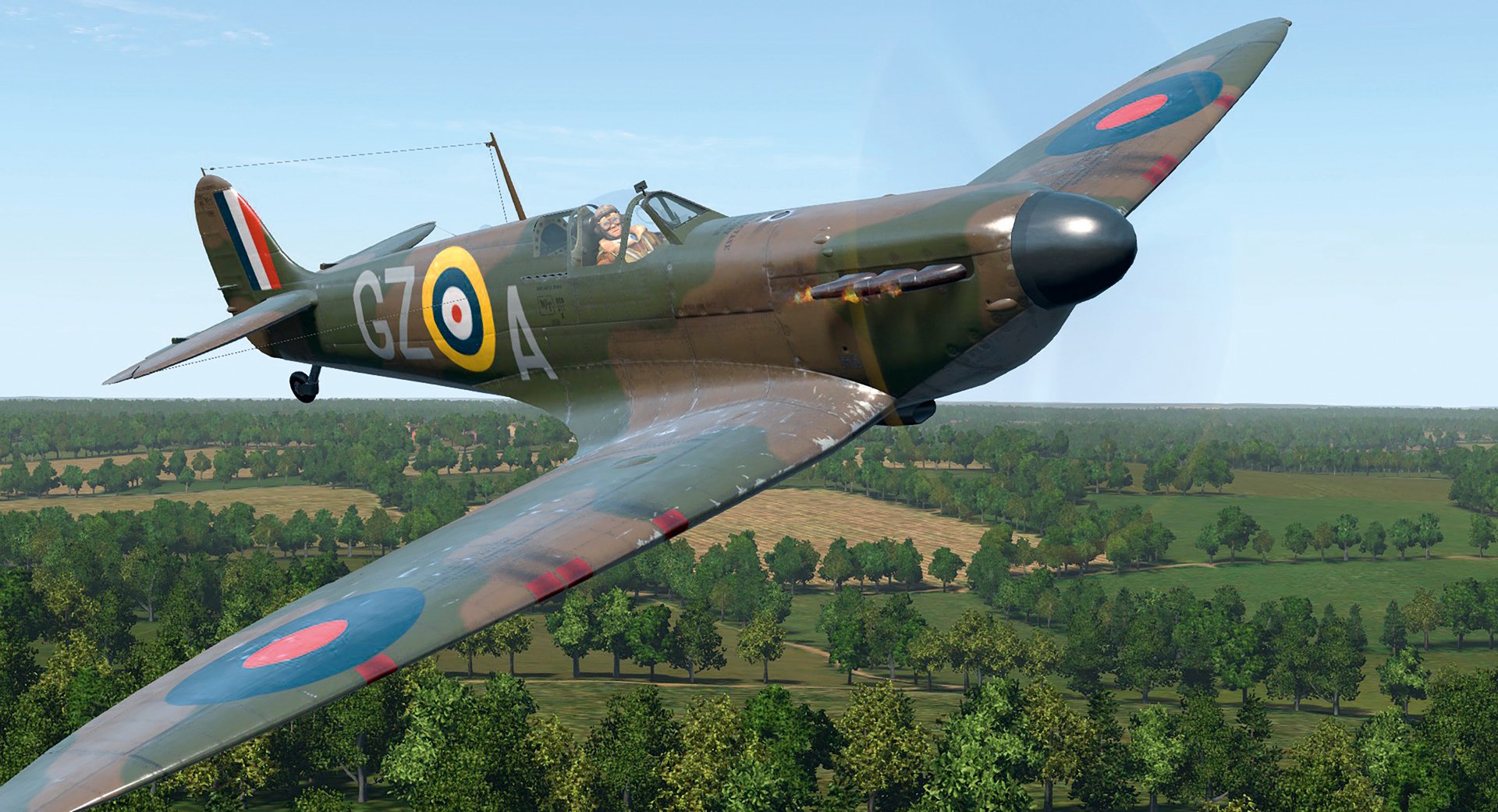 In terms of handling, the Cliffs of Dover and DCS Spitfires were the least stable.

The sound of music

I couldn’t end this article without mentioning how each developer had approached the challenge of reproducing that unique sound of the Merlin/Griffon engine. At the outset, it has to be said that each one has managed to capture the ‘general‘ sound of the Spitfire‘s engine.

However, there are subtle, but noticeable differences between them in terms of tone and quality. RealAir Sim’s rendition is more of a ‘growl’ in tone, while Aeroplane Heaven’s reproduction is a little softer in character. COD’s rendition is tonally somewhere in between these two. The products which I personally think best capture that inimitable Merlin sound at every stage of throttle are the A2A and DCS Spitfires.

I hope this brief two-part overview has been helpful and given you some insight into what is available out there for Spitfire fans and hopefully conveyed what each one has to offer in terms of visual presentation, systems, flight dynamics and sound modelling.