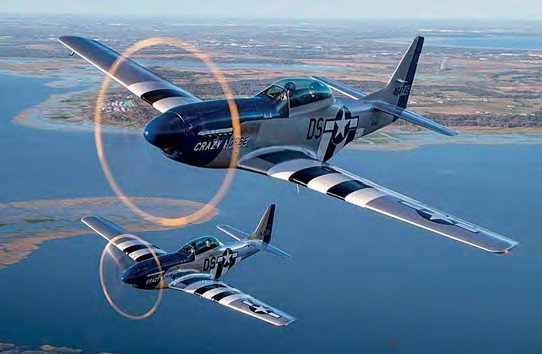 2017 has been an extremely big year for the Stallion 51 Corporation, one full of adventure, awards and anniversaries. It started with Lee Lauderback, president and chief pilot of Stallion 51, having recently become a member of the Society of Experimental Test Pilots, an exclusive group of exceptional aviators such as R. A. ‘Bob’ Hoover and ‘Hoot’ Gibson, who nominated Lee to the organisation.

April marked Stallion 51’s 30th anniversary, commemorated by inviting its almost 200 Mustang check-out graduates to a ‘homecoming’ before and during the annual Sun ‘n Fun airshow in Lakeland, Florida. Seventeen of the graduates brought their Mustangs to help celebrate Stallion’s three decades of aviation excellence, flying in formation during the show, during which Lee Lauderback was honoured with the Federal Aviation Administration’s Wright Brothers Master Pilot award for his 50 years of safe flight operations and his many contributions to aviation safety.

This summer, Lee was asked to fly the rare B-model Mustang Berlin Express to Duxford, UK for the Flying Legends Air Show. The epic 5,470-mile aviation adventure started in Texas and flew over the North Atlantic ocean, landing in Greenland, Iceland and Scotland before reaching its final destination at Duxford; eight legs in seven days. This historic event was followed by millions of enthusiasts via social media.

You too can join Stallion 51 in one of its dual-cockpit, dual-control Mustangs to take the controls and make your own Mustang memories. Visit www.stallion51.com for more.