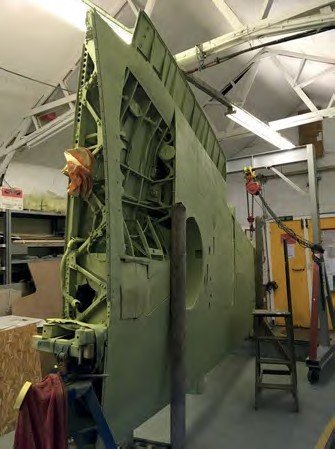 The starboard wing from Spitfire XVI RW388 after being sprayed in primer. The wings still show evidence of the two forced landings the aeroplane endured, with several many wrinkled panels, and the wingtip ends bear witness to possible ground-looping.
TONY HARMSWORTH

In the Medway Aircraft Preservation Society (MAPS) workshop at Rochester Airport, Kent, the wings of the Potteries Museum and Art Gallery-owned Supermarine Spitfire XVI, RW388, were sprayed using a two-part epoxy primer during early December. The majority of the fuselage has also been stripped of the ‘household enamel’ paint down to the original silver paint finish that was probably applied when the airframe was first prepared for gate guardian duties in 1952.

Robin Heaps, company secretary at MAPS says, “There is very little corrosion on the aircraft, and that is only where we expected it to be, typically on unfinished steel surfaces.

There is rippling on some of the skins, probably resulting from multiple handling over the years. There are also a few minor but non-standard ‘repairs’ that have been carried out, probably after it was last flown. We have cleaned and painted the Packard Merlin engine and done some refurbishment of the exhausts, but a number of the ancillaries are missing and we have a number of pipes that were removed prior to delivery to us that still need to be fitted. The undercarriage legs have been cleaned, primed and painted.

“Much of the interior — instruments, controls, etc — is missing and was probably cannibalised before the aircraft was passed by the RAF Museum to Stoke in 1972. We are still discussing with the owners at Stoke what action to take — what will be the ‘completed’ state of the aircraft.”

The Spitfire is expected to be returned to Stoke-on-Trent during the first half of 2020, but that will depend on a number of factors that are still being determined, including the completion date of the new museum extension that will house the Castle Bromwich-built fighter.

Although it saw no wartime service, having been delivered to the RAF in July 1945, RW388 was to achieve fame during the summer of 1968. Following conversion to ‘low-back’ configuration at RAF St Athan, it was painted up as Spitfire V AB917 and participated in both the Royal Tournament at Earl’s Court and the Edinburgh Tattoo during the RAF 50th anniversary commemorations. From 1952 to early 1968 it had been a gate guard at the RAF bases at Benson and Andover. The fighter was presented to the city of Stoke-on-Trent by the RAF in memory of Spitfire designer R. J. Mitchell, who was born in Kidsgrove, just north of the city, and educated at a co-educational grammar school in Stoke.