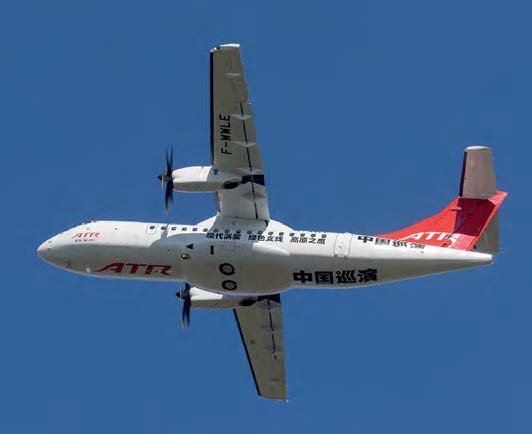 ATR is studying a new short take-off and landing variant of the ATR 42-600, pictured here on a recent demonstration tour in China.
ATR

Turboprop manufacturer ATR is studying a new short take-off and landing (STOL) variant of its ATR 42-600 called the ATR 42-600S. The potential new variant would offer improved STOL performance on the current aircraft, with the ability to take off and land on runways as short as 2,624ft (800m), which would offer a reduction from the standard ATR 42-600’s take-off distance of 3,822ft (1,165m) and 3,694ft (1,126m) landing distance.

Zuzana Hrnkova, Vice- President Marketing at ATR, told AIR International: “Once we complete the market assessment, and we are in discussions with various potential customers, we will approach our shareholders for authorisation to launch the programme.”

Hrnkova said the potential ATR 42-600S would, “provide operators with an even more adapted product to access [remote] airports and would be a real plus for those operating in remote or mountainous areas, which often feature short runways and challenging terrain”.

The ATR 42-600 orders placed last year came from airlines in the United States, Bhutan, St Pierre and Miquelon, and Japan. Hrnkova said the geographical spread of territories, “really proves the operational versatility of the aircraft and demonstrates this aircraft meets the needs of airlines”.

ATR said its 600 Series aircraft (the larger ATR 72-600, as well as the ATR 42-600) secured 62% of new turboprop sales in 2018. The company delivered 76 aircraft during the year and reallocated the aircraft it was unable to deliver to Iran Air due to trade sanctions.