Looking down a taxi way at Langley Air Force Base as an afternoon launch gets underway, the trilateral nature of Exercise Atlantic Trident is evident. Amidst the unmistakeable sound of Pratt & Whitney F119 engines running as F-22 Raptors lead a wave of jets out to runway 25, the about-to-depart strike package also comprises three more of the world’s most advanced fighter aircraft types, F-35A Lightning IIs, Typhoon FGR4s and Rafales.

Watching F-22s depart, the combined power of two F119-PW-100 twin-spool augmented turbofan engines capable of generating possibly in excess of 70,000lb (312kN) of thrust makes take-off a dynamic, yet a graceful procedure. Without afterburner, and therefore less thrust, each F-22 got airborne in less than 3,000ft (900m) of runway. Flight operation intensity was high during sequencing for departure, with a mix of fourth-generation Rafale and Typhoons taking their turn between fifth-generation F-22s and F-35s.

Heading out to operating areas over the Atlantic Ocean almost equivalent in size to the State of Virginia and less than a minute’s flying time from Langley field, pilots were soon in the fight.

What was the fight about, though, and how did the exercise develop over its three-week term? One word: integration.

That’s an important aspect of current air warfare doctrine. Consider the ongoing confiict in Syria and Iraq and the Americanled operation to eliminate the terrorist group ISIL dubbed Operation Inherent Resolve. Along with Special Forces activity, air power is at the heart of the ongoing operation. Since its launch in September 2014, various air arms have joined the fight including the UK and France. Operation Inherent Resolve is the first combat operation involving French Rafales, British Typhoons and US Air Force F-22 Raptors. All three types, alongside many others, are conducting missions over Iraq and Syria that require integrated planning and execution to help ensure mission success. No surprise, then, that the first edition of Atlantic Trident held at Langley in November 2015 involved all three types: F-22, Rafale and Typhoon. At the conclusion of the 2015 edition, leaders of all three air arms, the US Air Force, Armée de l’Air and the Royal Air Force, agreed to stage a second edition, which, like the first, would involve interoperability and ever greater integration between the units involved. In the words of one officer involved with Atlantic Trident, all participants were “stretching their legs” throughout the exercise.

Atlantic Trident 2017 differed from the event staged in November 2015 with the maiden participation of the F-35A Lightning II. That provided exercise commanders with a quartet of fighter types to form a Blue air force of fourth and fifth-generation fighters, and an opposing high-end Red air force equipped with F-15E Strike Eagles and T-38C Talons simulating enemy strike aircraft.

1 Silver by nickname, silver by paint scheme. The F-22 is sometimes referred to as the silver bullet. This example looks particularly silver in the bright light and wears tail markings for the 1st Fighter Wing.

Atlantic Trident is an Air Combat Command-sponsored training event hosted by the F-22-equipped 1st Fighter Wing based at Langley. F-35 participation was also sponsored by Air Combat Command and provided by Air Education and Training Command’s 58th Fighter Squadron, a training squadron based at Eglin Air Force Base, Florida. Utilising a training squadron came about because the US Air Force currently has one combat-coded unit, the 34th Fighter Squadron based at Hill Air Force Base, Utah. At the time of the Langley exercise, the 34th was deployed to RAF Lakenheath in England conducting the F-35A’s first overseas deployment. That was a hugely important event for the Air Force in proving all aspects of the F-35A’s ability to deploy after the type’s initial operational capability declaration last August. However, Atlantic Trident was also an important event designed to provide the US Air Force F-35A community with an opportunity to integrate with Typhoon and Rafale. Not only that, but it was also a chance for F-35 pilots to learn how to utilise the Typhoon and Rafale in combat, and for British and French pilots to understand the capabilities and limitations of the F-35. Integrated training enables all pilots to improve on executing an air tasking order as part of a coalition operation. 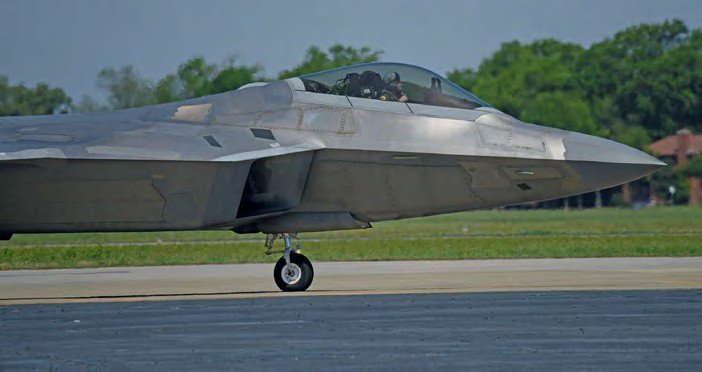 2 The forward fuselage of this F-22 shows visible signs of repairs to the low-observable coatings. 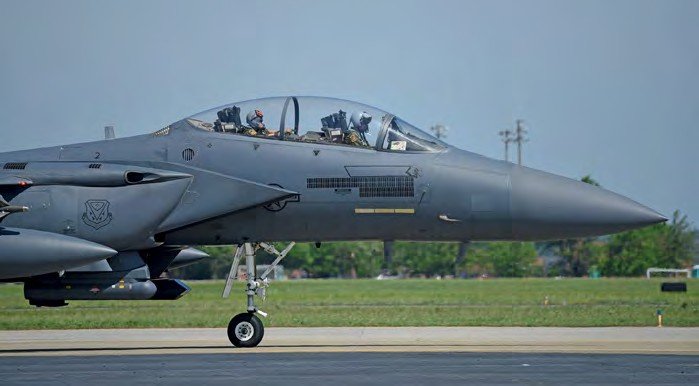 3 Mission markings on a 391st F-15E applied during deployment to the US Central Command area of responsibility denoting weapons released over Iraq and Syria.

4 The main component of the Red air force during Atlantic Trident was provided by F-15E Strike Eagles assigned to the 391st Fighter Squadron based at Mountain Home Air Force Base, Idaho. Squadron aircraft have tiger-style fin flashes denoting the unit’s ‘Bold Tigers’ name.

Each week of the three-week exercise was dedicated to a different mission of increasing complexity.

Week one involved 1 v 1 basic fighter manoeuvring between dissimilar types to allow pilots to gain an appreciation and understanding of the capabilities of the different aircraft during in close combat.

F-35As did not participate in week one. Week two was dedicated to defensive counter air (the protection of territory, assets and facilities) tasks in which an integrated Blue air force comprising F-22s, F-35s, Rafales and Typhoons defended against T-38Cs and F-15Es.

One specific example involved F-35As protecting a sector of airspace from T-38Cs simulating striker aircraft and F-15Es as the baseline air-to-air threat. Initial missions flown in week one involved 30-minute scenarios and switched to 60 minutes mid-week. By the end of week two, the F-35As were conducting target protection and providing protection to high value assets such as KC-135 tankers and E-3 AWACS aircraft for the entire scenario time.

Once again, integration was the key requirement of the second week’s missions.

Mission leaders had to determine how to take advantage of the strengths and defend against the weaknesses of each type of fighter and use a small mix of dissimilar types: for example, two F-22s and two Typhoons against a similar or greater number of adversaries.

Week three was dedicated to offensive counter air (the suppression of the enemy’s aircraft, and facilities), which involved strike missions.

Missions flown during week three involved more aircraft. A Blue air force of F-22s, F-35s, Rafales and Typhoons fighting a Red air force once again comprising F-15E Strike Eagles and T-38s, but one with the ability to regenerate multiple times to give a dense Red air threat presentation.

Exercise commanders tasked Blue air with two daily missions throughout weeks two and three. Missions flown in week two typically comprised four F-22s and a similar number of Rafale, Typhoon and F-35As. Ratios were roughly balanced to avoid scenarios dominated by F-22s resident with the 1st and 192nd Fighter Wings based at Langley. During the third week, some of the final missions involved a couple more Typhoons and F-22s based on available numbers of aircraft.

5 The lead aircraft in a flight of four F-35A Lightning IIs turns in to the pattern at Langley.

1 The pilot of a T-38C runs through some cockpit checks. T-38Cs assigned to the 71st Fighter Training Squadron based at Langley are now dubbed ‘Langley Adversaries’ reflecting their role as professional adversaries for the local F-22 Raptor squadrons.

Both the F-22 and the F-35 have exceptional sensor fusion giving the pilot an unparalleled level of situational awareness of the airspace and the surface battle scape.

Optimised for the air-to-ground role, the F-35 complements the F-22’s air-to-air pedigree. In the 2015 edition of Atlantic Trident, F-22s provided situational awareness of the battle space via voice communication to Rafales and Typhoons. On occasions when the F-22 was not in the airspace, the fight made it significantly more complicated for Rafale and Typhoon pilots to determine what was happening in the air.

Enter the F-35 in this year’s exercise and some of the pressure was removed from the Raptor pilots’ tasking; the F-35As could also provide good situational awareness generated by the jet’s sensor fusion capability.

This is one of two primary capabilities the F-35 brought to the fight during the exercise. The second was the aircraft’s ability to stay on station for a longer period of time. Its slick stealth configuration minimises drag and its single engine both help to reduce the rate of fuel burn.

With an internal fuel load of 18,000lb (8,170kg), the F-35As were easily able to support one-hour vulnerability periods for escort or strike missions. The ability to stay on station for a long time is a huge attribute and provides tactical persistence with the sensor suite and survivability of the aircraft.

The F-35As currently assigned to the 58th Fighter Squadron are configured with Block 2B5.3 software, which is equivalent to Block 3i software loaded on the later Low Rate Initial Production Lot aircraft assigned to the combat-coded squadron at Hill, but with different, earlier hardware, primarily processors.

As a training unit, the 58th Fighter Squadron is not yet equipped with a deployable Autonomic Logistics Information System (ALIS); because it’s a unit that’s primarily tasked with pilot training. During the 58th’s two-week deployment at Langley, squadron maintainers and ALIS specialists supported flight operations and maintenance by linking back to the main system at Eglin to record all mission information.

2 Atlantic Trident provided opportunities to see four of the world’s most advanced fighter aircraft alongside one another. A Rafale C shares the end of runway ramp with an F-22 awaiting take-off clearance for an afternoon mission.

4 Maintainers remove pins from, and check over, an F-15E as part of last chance checks at the end of runway ramp prior to departure. 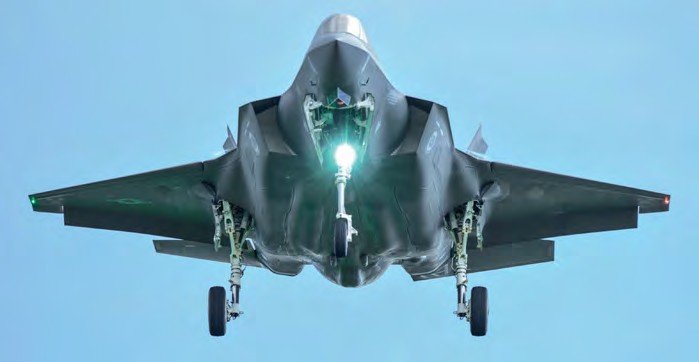 Unlike some international exercises in which different fighter types operate on Blue and Red air based on the mission scenario of the day, throughout Atlantic Trident all four types were permanently assigned to Blue air. The exercise objective was integrated training to learn how better to fight together. Exercise commanders considered any allocation from the assembled force of Raptors, Lightnings, Typhoons and Rafales to Red air to be wasteful of a given number of jets. Atlantic Trident was staged to move the training from basic interoperability to integration.

6 The unmistakeable curves about the forward fuselage of a Dassault Rafale with tail markings of Régiment de Chasse 2/30 ‘Normandie-Nièmen’ based at BA118 Mont-de-Marsan in south west France.

Each nation attending Atlantic Trident is currently involved in the ongoing fight against ISIL over Iraq and Syria. This includes the F-22, Rafale and Typhoon, so the exposure to each weapons system during their time at Langley was perhaps not that novel. That said, all nations have their own red lines limiting what they are prepared to share and talk about. These were clearly understood by all three nations and were put aside to avoid interference with mission execution. Understandably, the planning provided an arena in which all three nations got vital training in tough and sometimes complex scenarios with the very latest technology and weapon systems in NATO.

Success can be measured in many ways. For Atlantic Trident, international training and an understanding by all of each of the major weapons systems involved that will allow coalition airpower to be ever more successful was the measure.