In the early hours of April 14, a joint cruise missile attack targeted three sites in Syria in response to the use of chemical weapons in Douma. A total of 105 cruise missiles were launched during an operation that involved 66 combat aircraft from the US, France and the United Kingdom. 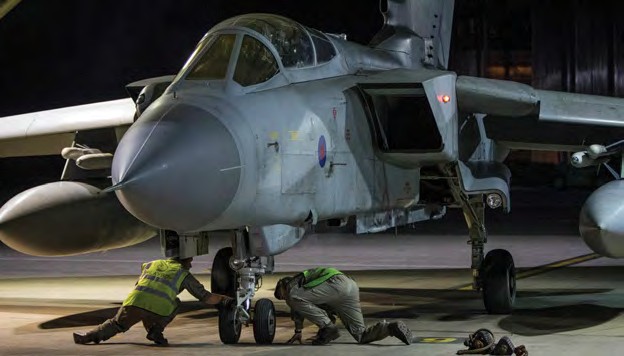 An RAF Tornado GR4 taxiing into its hangar after landing at Akrotiri on completing its mission. The four Tornados that conducted strikes in Syria were flown by No 31 Squadron ‘Goldstars’. Crown Copyright

A SUSPECTED CHEMICAL ATTACK in the Syrian city of Douma on April 7 reportedly killed at least 70 people. The US government quickly attributed the atrocity to the Syrian Arab Army, while the Syrian government and its allies claimed it had been carried out by rebels — some suggesting it was a ‘false fiag’ operation to put Syria under political pressure. The US, France and UK claimed to have evidence showing the direct role of Syrian government forces in the attack, which was apparently aimed at the Jaysh al-Islam group (designated as a terrorist organization by Syria, Russia and Egypt).