STRINGBAGS over the SCHELDT

Even towards the very end of World War Two, the biplane had meaningful front-line roles to play. Following last month’s feature on the Albacores of No 415 Squadron, we continue the story of RAF biplanes in action near the conclusion of hostilities through the words of some of the men who flew the black Swordfish operated by No 119 Squadron 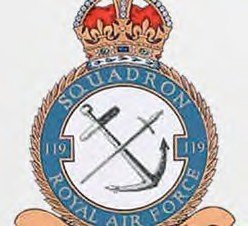 No 119 Squadron became the only RAF squadron to be fully equipped with the Swordfish when it replaced the Albacore in January 1945. This MkIII, NF410/NH-F, has a Donald Duck motif on the nose. It was photographed flying off the Dutch coast during the spring of 1945.
VIA NORMAN WILLIAMSON

With the Allied invasion of Normandy completed successfully, the promise that had been made to the Canadian government was fulfilled and No 415 Squadron reassigned to Bomber Command. On 19 July 1944 its Albacore Flight at Manston became No 119 Squadron, though in reality little changed. The Canadian who led the Albacore Flight, Sqn Ldr J. I. T. Davis, was given command of the ‘new’ squadron.