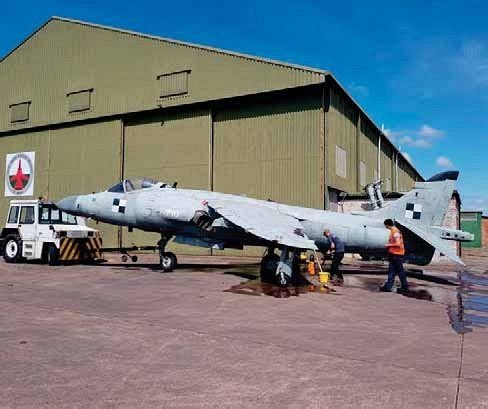 Pictured after arriving at St Athan, the first Sea Harrier FRS2, ZA195, is now under cover for the first time in 13 years at the South Wales Aviation Museum.
GARY SPOORS

After spending 11 years on loan to the Tangmere Military Aviation Museum, the prototype BAe Sea Harrier FRS2, ZA195, arrived at its new home at St Athan in Wales on 12 July. It is now on show under cover at the South Wales Aviation Museum, which recently gained charitable status. The Harrier is owned by Gary Spoors, who has an engine for it and hopes to get the machine ground-running.

Several nose sections belonging to Gary have also recently arrived, including the ex-RAE Llanbedr Canberra TT18 WK128, Trident 2E G-AVFM, once an instructional airframe at Brunel Technical College in Bristol, and Boeing 707-436 G-APFG. Soon to follow is a complete ex-Royal Navy Canberra TT18, WK126, from Gloucester Airport. Wessex HAS1 XM300, which had previously been stored at Nantgarw near Cardiff, is also now on site, on loan from the National Museum of Wales.