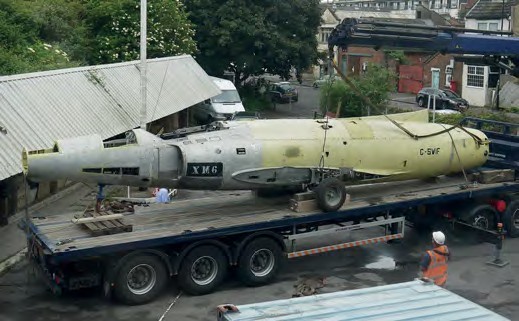 The extended nose of the Swift F7 variant is apparent in this view of XF114 arriving at Solent Sky on 7 June. CHRISTOPHER SMITH

The only surviving Supermarine Swift F7, XF114/G-SWIF, arrived at the Solent Sky museum on 7 June from a storage site in Hampshire. Of the 197 Swifts built, only 14 were F7s, the variant having a nose cone 2ft longer than standard to house radar guidance equipment for testing the Fairey Fireflash beam-riding air-to-air missile, a wingspan extended by nearly 4ft to accommodate the rocket pylons and an uprated Rolls-Royce Avon 116 engine.

The prototype Swift F7 first flew in April 1956 and, although it never entered front-line RAF service, the variant flew on important experimental work on the strength of No 1 Guided Weapons Development Squadron at RAF Valley, Anglesey, during 1958, firing missiles over the Aberporth range. XF114 still has the control panel for the experimental missiles in the cockpit.

The machine was subsequently used for fast jet familiarisation and lead-in training for Royal Navy pilots. The rest of the aircraft’s operational life was spent on aquaplaning trials at Cranfield, testing the coefficient of friction between aircraft tyres and wet runways. During these tests the aircraft burst both its tyres and, on one occasion, barely avoided a collision on the runway. Well-known test and display pilot and racing driver ‘Dizzy’ Addicott was at the controls for many of these braking trials.

During 1967 XF114 went to Flint Technical College in Wales for use as an instructional airframe. Bournemouthbased Jet Heritage acquired it in exchange for a Jet Provost in the mid 1980s, the intention being to get it flying again. In 1998 it was purchased by Jonathon Whaley and put into storage at Scampton. After being bought by Solent Sky, its most recent appearance was in the static display at the Royal International Air Tattoo at Fairford in 2003.