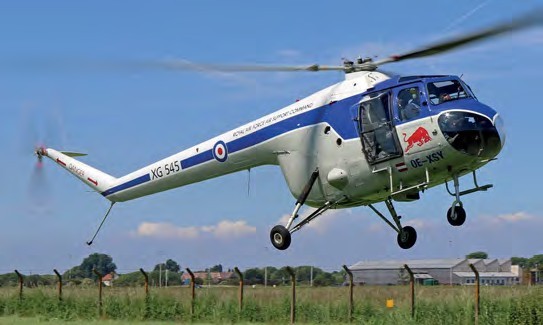 Siegfried Schwarz brings Sycamore Mk52 OE-XSY, which is painted as XG545, in to land at The Helicopter Museum at Weston on 11 June. PETER R. MARCH

Belvedere XG454, here on display at the Museum of Science and Industry, will move to THM at Weston during 2019. MSI

The Salzburg-based Flying Bulls’ Bristol Sycamore Mk52 — the world’s only airworthy example of Britain’s first production helicopter — arrived at The Helicopter Museum (THM) in Weston-super-Mare during the morning of 11 June, the day after its first UK airshow appearance at RAF Cosford. The historic machine, OE-XSY (c/n 13475), had left Salzburg on 7 June, flown by Siegfried Schwarz, and accompanied by the Flying Bulls’ MBB Bo 105 D-HTDM. After several stops en route it made landfall in the UK at Lydd, the first time a Sycamore had been seen in English skies since the type was withdrawn from use in the VIP transport role with No 32 Squadron at RAF Northolt during 1972.

This Sycamore was built during 1957 at Bristol’s Oldmixon factory, adjacent to Weston-super-Mare airfield, initially flying as G-18-148. It was part of an order of 50 Sycamore Mk52s for the West German armed forces. Handed over at Filton in April 1958, it served with the Luftwaffe as CA+328 and AS+324 before being transferred to the Marineflieger, initially as SC+206. The machine was retired from military service in 1973 as 78+17.

During 1976 it was sold to farmer Karl Müller at Mellinghausen as D-HALD, and flown in a lurid green colour scheme with another Sycamore to support firefighting in the Lüneburg Heath area until August 1982. After a period out of use, in August 1991 it was re-registered in Switzerland as HB-RXB to Peter Schmid, who based it with the Fliegermuseum Altenrhein. During 2010 the Flying Bulls acquired the Sycamore along with a large stock of spare parts from former German Sycamores that the previous owner had painstakingly collected over the years.

The UK trip — which Peter Schmid joined — was planned to coincide with the RAF centenary celebrations. OE-XSY is due to appear in the static park at the Royal International Air Tattoo at Fairford on 13-15 July and in the flying programme at Farnborough the following week, 70 years after the type made its public debut at the first Farnborough SBAC show in 1948. It has been suggested that the Sycamore will be repainted into its original Luftwaffe colours and markings following its return to Austria.

Destined to return to Weston permanently, meanwhile, is Bristol Belvedere HC1 XG454, ownership of which has been transferred to THM from the RAF Museum. The tandemrotor machine made its first flight at Oldmixon three years after the Flying Bulls Sycamore, on 18 June 1960, with chief helicopter test pilot ‘Sox’ Hosegood at the controls. In April 1968 XG454 was on static display at Abingdon during the RAF 50th anniversary show, and was officially withdrawn from use the following month. It then went into storage at Henlow in May 1969 for the RAF Museum, remaining there until early 1983 when it was roaded to the Manchester Museum of Science and Industry (MSI), which opened that March.

THM has Belvedere XG452 under restoration in its workshops, and the nose of another, XG462, on display. Museum founder and trustee Elfan ap Rees takes up the story: “XG454 had remained in RAF Museum ownership while at MSI, but duplicated XG474 at Hendon, and had a less distinguished operational history. Consequently, when the MSI decided to rationalise its aircraft collection and return XG454 to its owners, we were quick to put in a bid for its transfer. The actual move back to Weston-super-Mare will not take place before 2019, due to the complexity of extracting the helicopter from the MSI building.

‘The acquisition of XG454 has led to a change of thinking regarding XG452. Whilst the restoration work had continued to progress, by 2018 the team was beginning to run out of work it could do. Repairs and refurbishing of all eight main rotor blades continued, but completing the aircraft fully was always going to be frustrated by missing components. With the forthcoming arrival of ‘454 it has been decided to utilise ‘452 more as a STEM (science, technology, engineering and maths) education piece, leaving the airframe in its natural finish and making the cabin fully accessible for school groups and so forth. Alongside the airframe will be positioned one of the restored main rotor heads and gearbox, with one of the Napier Gazelle engines.

“The cockpit section of XG462 will also feature in this exhibition, which is intended to be housed with the complete XG454 in a new building. By mid-2018 we had planning permission for another hangar in place and are now looking at raising the £350,000 needed.”