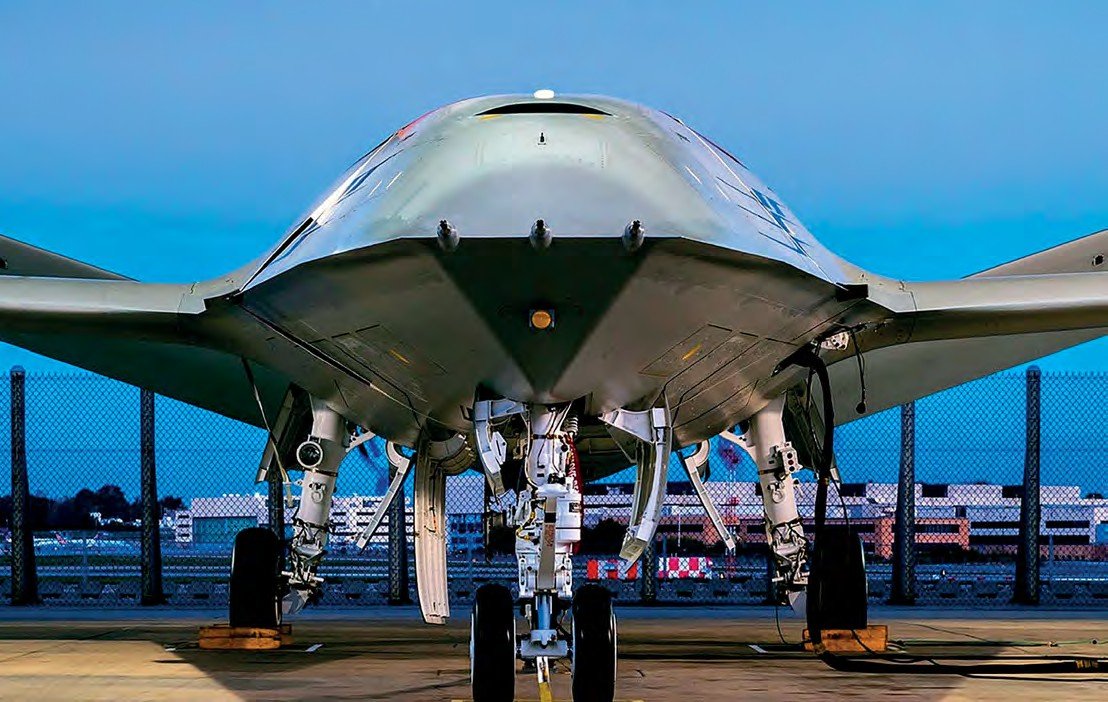 THE EMERGENCE of a new combat aircraft design – even an unmanned one – is a rare and attention-grabbing event. While usually done through a ceremonial roll-out with VIPs and the press in attendance, in December and January Boeing gave a contemporary twist to the process by gradually – and incompletely – using social media to reveal its new T1 UAV.

This is no ordinary UAV.

Boeing’s air vehicle is being designed to meet the US Navy’s Carrier-Based Aerial Refueling System requirement designated the MQ-25A Stingray. The programme was approved by the Joint Requirements Oversight Council of the Joint Chiefs of Staff in July 2017.

Accelerated programme The Navy is aiming for an accelerated Stingray programme, managed by its rapid capability authority, the Maritime Accelerated Capabilities Office. Total development costs are budgeted at $5 billion, half of which will be spent by FY2022.

The current competition requires the winning team to build four air vehicles to be used for developmental test and evaluation, followed by an initial 72-aircraft production order, and will be decided in August 2018. The first Stingrays will fly in 2019–2020 and enter service before the end of 2020, initially aboard the carriers USS Dwight Eisenhower (CVN 69) and USS George Bush (CVN 77). Initial operational capability is planned for the mid-2020s.

Stingray competitors It is uncertain how many teams actually responded by the January 3 deadline set in the Navy’s request for proposals (RFP) issued on October 4, 2017.

Northrop Grumman, Lockheed Martin, Boeing and General Atomics all received risk reduction funding to develop their Stingray design. However, on October 25, 2017, Northrop Grumman announced it was pulling out of the competition, simply stating the company’s team did not believe it was executable for them.

All of the three remaining competitors – barring a dark horse outside submission that has been privately funded – have kept their designs under close hold. This made Boeing’s recent release of imagery of its design, albeit it incomplete and without explanation, of great interest. Lockheed Martin’s Stingray design has been reported – without confirmation – to be a flying wing, similar to its larger, land-based RQ-170 UAV. A company artist’s impression shows only the underside of a wing and an underwing refuelling pod.

General Atomics is said to be offering a new jet-powered design based on its Predator-C UAV, using elements of its MQ-9 Reaper design, fuselage and tail, but with folding wings. Like the Lockheed Martin design, it would rely on underwing refuelling pods.

Boeing’s Stingray – designated by the company simply as the T1 – was designed by the firm’s St Louis-based Phantom Works, building on its previous UAV designs such as the Phantom Ray technology demonstrator. It features a conventional planform: wings, fuselage and tail. Even in the incomplete imagery released by Boeing, it is evident it has been designed with a high degree of stealth: most notably, its single turbofan engine intake mounted dorsally, flush with the fuselage, with the jet exhaust going out between its heavily canted veetype stabilisers. This is a similar arrangement to that used on the Air Force’s original Tacit Blue stealth technology demonstrator aircraft in the 1970s.

Design of the nose and the tail hook, tucked inside serrated edge doors for low observability, also shows an emphasis on stealth. The T1 was reportedly undertaking engine ground tests in December, to be followed by deck handling demonstrations in early 2018. For the forthcoming maiden flight and flight testing, the first prototype has received the Federal Aviation Authority civil registration N234MQ.

Impressive, but what will the Navy pay for?

The Navy appears uninterested in paying for a Stingray design capable of carrying out missions in hostile airspace, which would mean paying – in terms of money and performance – for a stealth design. In September 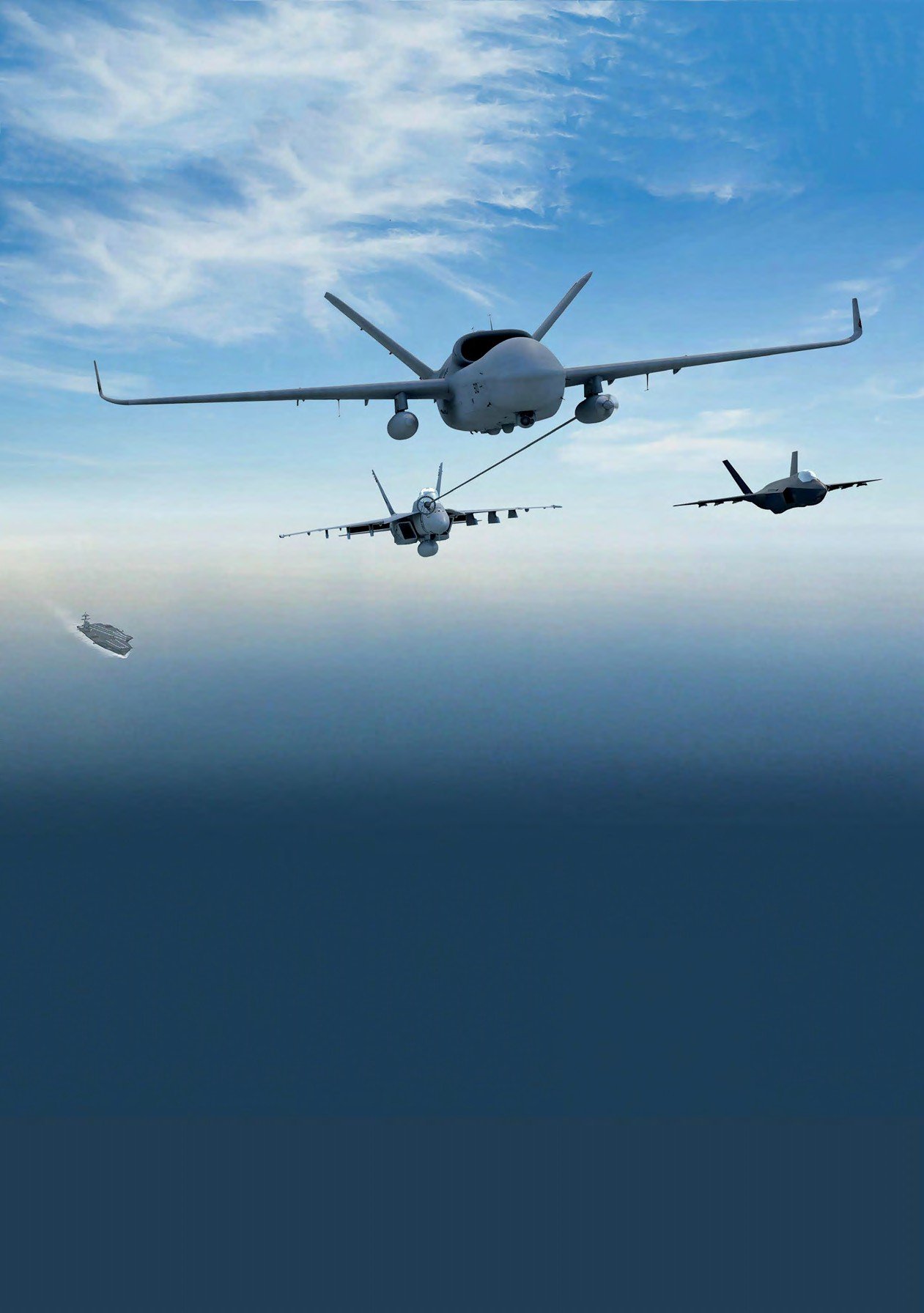 2017, Vice-Admiral Michael Shoemaker, the Navy’s air boss, stated that two key performance parameters for the Stingray are to be suitable for carrier operations and have the ability to offload or “give” 15,000lb (6,800kg) of fuel to receiver aircraft when 500 nautical miles (925km) from a carrier.

Unconfirmed reports have stated that the October 2017 RFP stressed the tanker mission exclusively and – in what has been termed de-scoping – did not consider secondary missions, such as the potential to serve as a pod-equipped intelligence, surveillance and reconnaissance or communications relay platform. One suggestion is that Northrop Grumman, after reading the RFP, walked away from the competition, because its crankedwing Stingray design, based on its successful X-47B Unmanned Carrier-Launched Airborne Surveillance and Strike prototypes, had stressed multimission capabilities. Northrop Grumman’s cranked wing may well have been less adaptable to the Navy’s descoped tanker requirements than the more conventional planform used on the Boeing design.

While Vice-Admiral Shoemaker has stated he does not consider stealth tankers to be a requirement, Boeing may believe that paying for stealth is not going to be a luxury if the Navy wants to defeat anti-access/area denial capabilities, including future surface-to-air missiles with a range of 270–320 nautical mile (500–600km).

Boeing believes it can win the Stingray competition with a stealth design. Northrop Grumman, a leading developer of stealth technology and the successful X-47B, does not think it was worth spending money on the Stingray competition. The reasons behind this have not been disclosed, but they may well reflect thinking similar to that which led Northrop Grumman to stay out of the Air Force’s T-X trainer competition, one on which Boeing, teamed with Saab, has made a major effort.

As with the T-X, Boeing’s Stingray competitor is believed to make use of proprietary fabrication capabilities for both metal and composites, developed by the Phantom Works. This fabrication capability may make the project economically feasible for Boeing, even if its decision to compete reflects the forecast unit cost of production aircraft. The horizontal chine line on the fuselage of the Boeing T-X and T1 designs suggests they may share commonalities.

Northrop Grumman investors include a significant number of venture capitalists who seek a near-term return on their investment and do not want to see the company spending money on aircraft that might not be selected for production. Northrop Grumman doubtless remembers how much money it saved by walking away from the KC-45A tanker, its candidate for the KC-X programme, which was eventually won by the Boeing KC- 46 Pegasus.

Northrop Grumman is firmly committed to its B-21 Raider stealth bomber programme, while Boeing needs new production to help ensure the future of its St Louis facility, which will in part depend on winning the Stingray and T-X competitions. Maybe Northrop Grumman has avoided spreading its finite development resources too thinly.

The two Air Force competitions have been delayed, and uncertainty over congressional action has the potential to delay each one further. The Navy is trying to avoid similar pitfalls for its Stingray programme, but it remains uncertain how Boeing’s competitor will fare. All three competitions are scheduled to be decided on this year.