Aircraft 39-8 releases a drop tank during a stores separation test flight from Vidsel in northern Sweden. 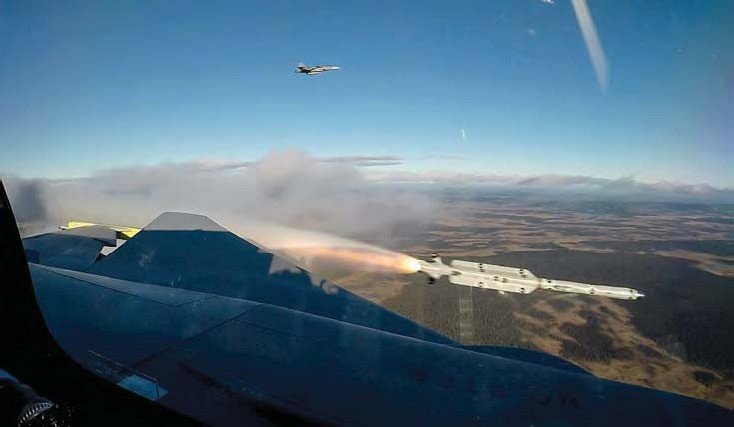 The plume of the rocket motor of an IRIS-T instrumented test vehicle burns brightly as the vehicle launches from the port side wing tip pylon of aircraft 39-8.

Saab’s Flight Test Unit based at Linköping is responsible for, and is currently conducting, the Gripen E common test programme involving the entire development test element and some initial elements of operational test. However, the common test programme is not solely undertaken by Saab, but in partnership with the Försvarets materielverk (FMV or Defence Materiel Organisation) and the Svenska Flygvapnet.

The Flight Test Unit comprises 250 personnel; technicians, flight test engineers, flight test instrumentation engineers, planners, and six test pilots. The FMV and the Svenska Flygvapnet also have pilots, engineers, technicians assigned. Explaining the basis of the common test programme, Mikael Olssen said testing is undertaken together with FMV, which introduces its operational test points into the development programme to provide early insight. The idea is to shorten the test programme and enable an earlier release to service.

The first aircraft used in the test programme 39-7 was originally built as a two-seat Gripen B, converted to a D-model, and later operated as the Gripen NG demonstrator flying since 2008.

Major modifications to 39-7 are installation of the new F414G engine, and the modified main landing gear, which was moved out to the wing root with a slightly wider track to create space for additional fuel. The jet was used as a testbed to gather data from the ES-05 radar, the SkyWard G infrared search and track system, the missile warning system, and the progressive software changes. Currently, the aircraft has a legacy three-display cockpit, but is soon to be modified with a wide area display installed in its aft cockpit to replicate a Gripen E cockpit. According to Mikael Olssen, 39-7 proved to be a perfect testbed for radar, IRST, other sensor testing, and customer demonstrations.

The first thoroughbred Gripen E, aircraft 39-8, made the variant’s maiden flight from Linköping on June 15, 2017. Operated as a flight sciences aircraft, 39-8 has undertaken the first 100 test flights and a similar number of hours.

Those vital missions opened up the basic flight envelope to an altitude above 30,000ft, flying beyond Mach 1.3, performing sustained rates of turn above 5Gs, and achieving above 15° alpha. Other flight test aspects flown to date are for the evaluation of flying qualities, handling qualities, platform testing, aerodynamics, stores carriage and, more recently, weapon separation.

Mikael explained the build-up in envelope expansion: “Initially, we increased the altitude. Then we took quite a step into supersonic speed. Then we came back to subsonic testing expanding G and alpha.

Once we had the confidence that the performance was ok, we went supersonic again, increased alpha and G in the supersonic regime and then returned to the subsonic regime again. We have been all over the envelope in parallel testing; that’s our philosophy.

“During the initial phase of the flight testing we were confident with the aircraft based on reliance of Saab’s computer modelling systems. So far, the flight test programme has been more or less wholly focused on flutter testing to make sure we’re up close to the borders, and to verify our confidence in the models.

“After 25 hours of flight, we took a planned maintenance period of four weeks. During that period, we undertook a software upgrade to determine whether the process could be completed as quickly as it was supposed to. We ran the test in the rigs, and then loaded it in the aircraft. It was an internal company event to demonstrate our upgrade capability. More recently, we undertook a bigger upgrade with M1.4 to aircraft 39-9 and 39-10.”

Sister test aircraft 39-9 leapt towards heaven for the first time on November 26, 2018. Lifting off the Linköping runway at 09:50hrs with Saab test pilot Robin Nordlander at the controls. The 33-minute flight involved functional checks to validate flight characteristics and test points of the M1.4 software, life support system and radio.

Standing wave patterns or shock diamonds in the supersonic exhaust plume created by the GE Aviation F414G engine in the engine test cell at Linköping. Shock diamonds are formed by the complex exhaust flow field and are visible due to the abrupt changes in density and pressure caused by standing shock waves. 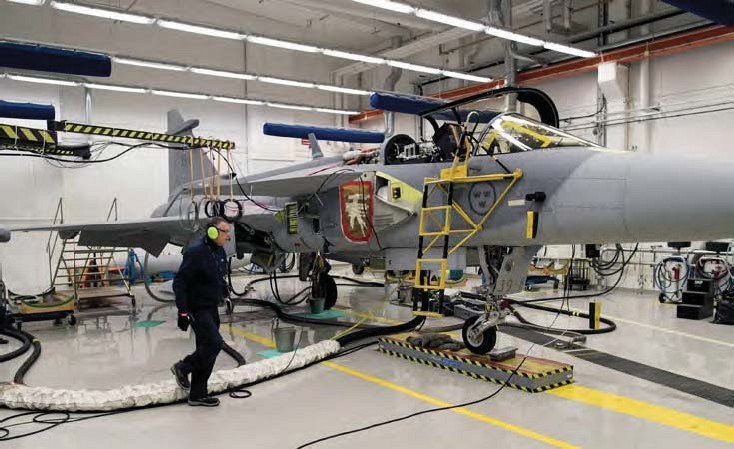 At the time of 39-9’s maiden flight, Jonas Hjelm, Saab’s Head of Aeronautics, said: “This new aircraft allows us to expand trial activities as we test more functionality with onboard systems and to increase the overall pace of testing.”

Now fully involved with the flight test programme, aircraft 39-9 is conducting testing of the aircraft’s tactical systems and sensors.

Aircraft 39-7 and 39-8 will soon be joined by 39-10. All three are configured with different modifications and cockpit layouts; 39-9 and 39-10 have been upgraded with M1.4 software, the ARC-210 radio system, and the latest life support system designed specifically for the E-model, dubbed EBRAG.

Both aircraft are assigned to mission systems testing and are likely to also be used to open up the envelope in specific ways.

To date, Saab has not predefined an aircraft for high alpha and spin testing. Saab may modify one of the three E-model test aircraft for the job, though this will not be required until the end of the flight test programme.

What is certain, Saab can partly depend on spin chute test data acquired from the Gripen C programme, undertaken back in the day with aircraft 39-6.

This raises an interesting question. How much piggybacking for the E and the F models can Saab take from the C and D models, given the new aeroplane has different dimensions and aerodynamic influences? Certainly some, according to Mikael Olssen: “Even though E is a new aircraft, it’s very similar to the Gripen C. We tried to use all the valid data from the C and D models. Many aerodynamic aspects are more or less the same based on what we have already gathered from the Gripen E.”

Looking around aircraft 39-7, Mikael Olssen explained how the aircraft’s aft cockpit is loaded with M1.3 software to enable the jet to run ACS and ACCS; the front cockpit remains configured as a Gripen D aircraft.

In early October 2018, aircraft 39-8 was being prepared for the first captive carriage test flight of the Meteor air-to-air missile. That flight took place from Linköping on November 26, 2018, with a single Meteor instrumented test vehicle loaded on each of the two outer underwing hard points.

Captive carriage and environmental testing is part of the weapon integration programme and was followed by stores separation testing just a few days later, in accordance with the flight test master plan. Aircraft 39-8 successfully completed the first release and launch verification tests between October 15 and 19, not with a Meteor instrumented test vehicle, but an IRIS-T, and an external drop tank. Unlike the captive carriage tests, stores separation requires an instrumented test range with an area sufficiently large enough to release stores from medium altitude. No such area is available anywhere near Linköping, so Saab’s Flight Test Unit, working with various FMV-led organisations, conducted the tests at Vidsel, the FMV’s test range in the north of Sweden.

Discussing stores separation tests, Marcus Wandt, one of Saab’s test pilots, highlighted the importance of flying with external stores such as drop tanks and missiles to evaluate how the aircraft behaves with the stores attached and the effect on the aircraft when releasing a drop tank and launching a missile.

Mikael Olssen reckons the Flight Test Unit has 18 months of intensive flight testing ahead, the first 12 until the first aircraft delivery, followed by ongoing testing of the MS22 mission system.