TEXTRON AVIATION announced on June 27, 2019, that it has delivered the 300th Cessna 525C Citation CJ4 to McNeilus Steel, based in Dodge Center, Minnesota. 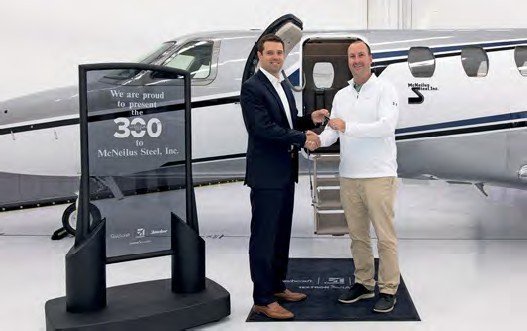 McNeilus Steel is a familyowned metals distribution company founded in 1948 and employs more than 450 across Minnesota, North Dakota and Wisconsin. The company had previously been a fractional owner of a Cessna 525 CJ1+ since 2015.

Levi McNeilus, Director of Purchasing at McNeilus Steel, said: “Our reputation is based on customer service and our Citation CJ4 will help us strengthen that reputation through even more interaction with our customers.”

Rob Scholl, Textron Aviation Senior Vice-President of Sales and Marketing, added: “The Citation CJ4 continues to be a standout in the light jet segment due to its combination of high performance, low operating costs and classleading cabin amenities.”

More than 5,000 Cessna Citation family light jets have been sold throughout the world since the first aircraft was delivered in 1978. The original Cessna model 500 Citation I was first announced in October 1968