That’s All Brother to fly soon

In the Basler Turbo Conversions workshops at Oshkosh, Wisconsin, the restoration of the Commemorative Air Force’s Douglas C-47 42-92847 That’s All Brother is making great strides, and the Normandy veteran Skytrain is expected to fly early in the New Year. The rewiring is now almost completed, most of the instruments have been overhauled and installed, and a modern avionics suite has been hidden behind a vintage autopilot. The engines are now installed and plumbed in, and the hydraulics system has been completed.

The team had hoped that ‘92847 would be able to make its first flight in the autumn of 2017, but the commitment to authenticity has resulted in the schedule being been pushed back. The exterior will also be completed during the first half of 2018, with paint and coatings being provided by Stits Polyfiber. Following test-flying, the C-47 will be allocated to the CAF’s Central Texas Wing, based in San Marcos. 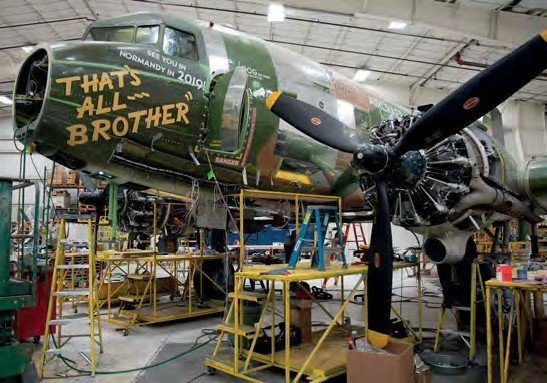 The historic C-47, 42-92847, in one of the Basler hangars at Oshkosh, with the That’s All Brother artwork repainted on the nose.
CAF

The historic C-47 was just weeks away from conversion to BT-67 turboprop power at Basler during 2014 when its history was pinned down: flying from RAF Greenham Common, the machine was the lead aircraft on Operation ‘Albany’, a formation of 432 aircraft that, just after midnight on 6 June 1944, dropped more than 6,600 paratroopers behind enemy lines on the Cotentin peninsula of Normandy. It flew a second mission on D-Day, towing a glider carrying men from the 82nd Airborne Division on the evening of 6 June as part of Mission ‘Elmira’, and went on to participate in Operation ‘Market Garden’ at Arnhem, the relief of Bastogne during the Battle of the Bulge, and Operation ‘Varsity’, the airborne assault over the Rhine.

That’s All Brother is one of several US-based C-47s that are due to fly across the Atlantic for the 75th anniversary D-Day commemoration in June 2019.