Third-generation LAIRCM ready for the KC-135 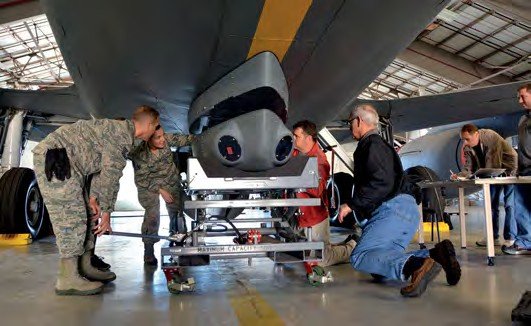 The new portable, modular system can easily be transferred from one aircraft to another, with installation taking around ten minutes. This quick turnaround means a squadron of eight aircraft all fitted with the basic wiring for the system could quickly swap the sensor from one jet to another, obviating the need to fit every aircraft with the full kit. The United States Air Force presently has 398 KC-135s, of which the Air Force Reserve and Air National Guard fly 247.

The changing shape of modern warfare puts the Air Force’s KC- 135s at more risk of engagement by man-portable air defence systems and infrared missiles. Low-altitude refuelling, often towards the forward edge of battle, as well as operating as a command and control relay, makes the tanker’s job more hazardous. Its cargo of aviation fuel means conventional pyrotechnic decoys are not an option. LAIRCM, acting autonomously, identifies missile threats and, if necessary, defeats them by locking on to the incoming missile and destroying them with high-energy laser burst. LAIRCM Program Office Manager at Tinker, Raymond Berhalter, said:

“Although many platforms have various forms of LAIRCM, the KC- 135 is the first operational US Air Force aircraft to field the latest configuration …the LAIRCM Block 30. Headquarters Air Force Reserve Command and the National Guard Bureau will determine which aircraft will receive the modification and deployment of the mission kits.”