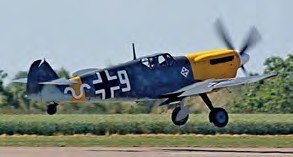 Richard Grace took yet another Hispano HA-1112-M1L Buchón up on its maiden post-restoration flight at Sywell, Northamptonshire on 28 June. This brings Britain’s airworthy population of the type up to four, the largest number amassed since the late summer of 1968 when shooting of the aerial scenes for the Battle of Britain film was completed.

The machine, C.4K-145/ G-AWHH, has been restored by Air Leasing at Sywell for its owners, Anglia Aircraft Restorations. Unlike the previous two Air Leasing Buchón restorations — C.4K-99/G-AWHM (see News, Aeroplane July 2018) and two-seater G-AWHC, both of which have been repainted in their Battle of Britain film colours — ‘AWHH wears the wartime markings of a Luftwaffe Messerschmitt Bf 109F-4, ‘White 9’, flown by Uffz Edmund Rossmann from Mironovka in Ukraine during September 1941.

The UK’s other airworthy Buchón is C.4K-102/G-AWHK, owned by Duxford-based Historic Flying. It is hoped that all four aircraft will appear at the Flying Legends show at Duxford on 14-15 July.