Thrustmaster needs little introduction when it comes to flight simulation. Over three decades, the company has earned a reputation for developing innovative and high-quality hardware peripherals for military flight simulation. So it could be said it came as a bit of a surprise when it announced a new product range called Thrustmaster Civil Aviation (TCA), marking its entry into the civil flight simulation market. The first controller to be released in the TCA product line was the TCA Sidestick Airbus Edition, which is the subject of this review. 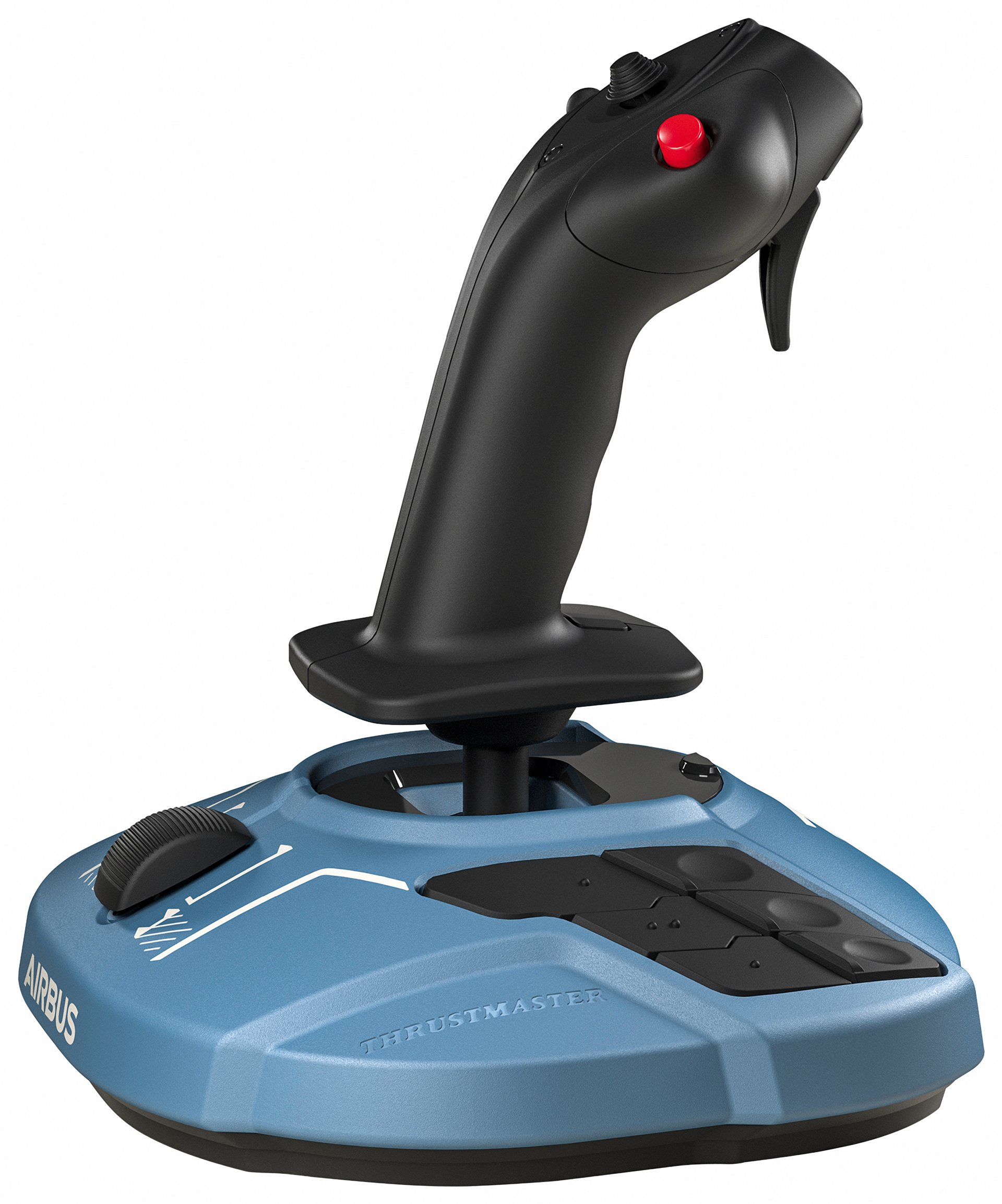 A single throttle axis can be used for controlling engine power with a detent for reverse thrust.

The TCA Sidestick is based on an actual sidestick found in Airbus airliners. Although on the surface it appears to share some commonality with Thrustmaster’s T.16000M, there are significant differences. The TCA Sidestick is an officially licensed Airbus product and according to Thrustmaster is a 1:1 scale replica of a stick found in the real jet and is made from heavy-duty plastic with the base finished in Airbus blue. Along with a pitch and roll axis, the TCA Sidestick stick features a twist grip or a Z-axis, which can be configured for controlling the rudder. For those with a set of actual rudder pedals, the Z-axis can be locked into position with the press of a button or it can be assigned to the steering tiller for controlling the nose-wheel steering. 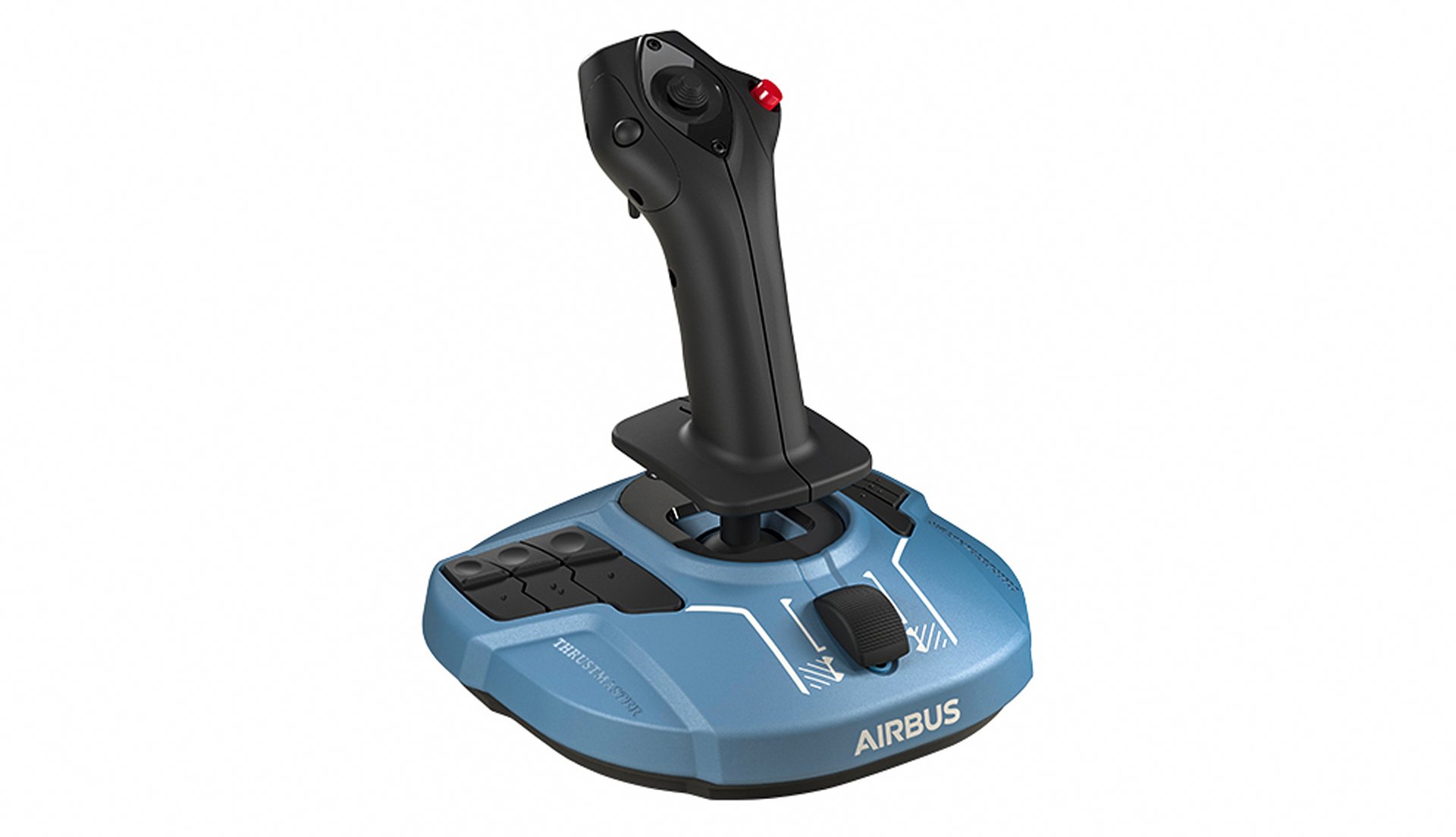 The build quality is robust with the base made from heavy-duty plastic and finished in Airbus blue.

Like the T.16000M, the TCA Sidestick is built with Thrustmaster’s proprietary Hall Effect Accurate Technology (HEART) technology. Essentially, it uses magnet sensors that provide 14-bit resolution, so the control inputs are smooth and accurate. Additionally, Hall Effect sensors don’t make physical contact, so there is no wear and tear on them. A single throttle axis can be used for controlling engine power with a detent for engaging reverse thrust. The sidestick boasts a generous amount of buttons and switches. It features 12 buttons (six per side) on the base which can be configured for various functions such as flaps, undercarriage, speed brakes, etc. The stick itself comes with three pushbuttons (two at the back and one on the front), a trigger and an eight-way HAT switch. 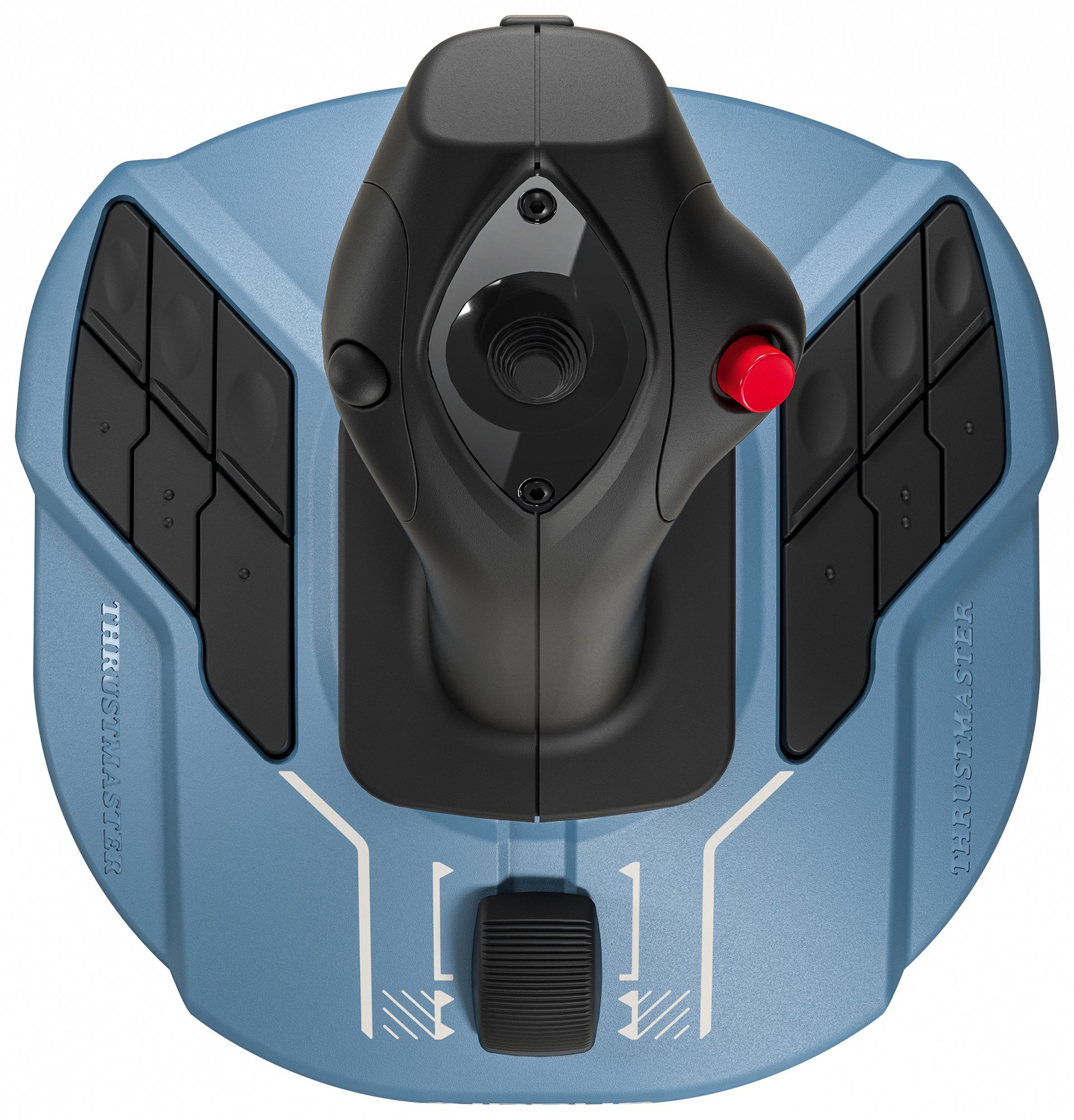 The sidestick boasts a generous amount of buttons and switches, including 12 buttons on the base, three pushbuttons, a trigger and an eight-way HAT switch.

The joystick is designed to be fully ambidextrous so it can be configured for left- or right-handed use (or the captain’s or first officer’s side) by removing two screws and swapping out the button modules. To achieve this, Thrustmaster has included two interchangeable modules with the stick. A two-way switch on the base can then be used to change from left-handed to right-handed use. 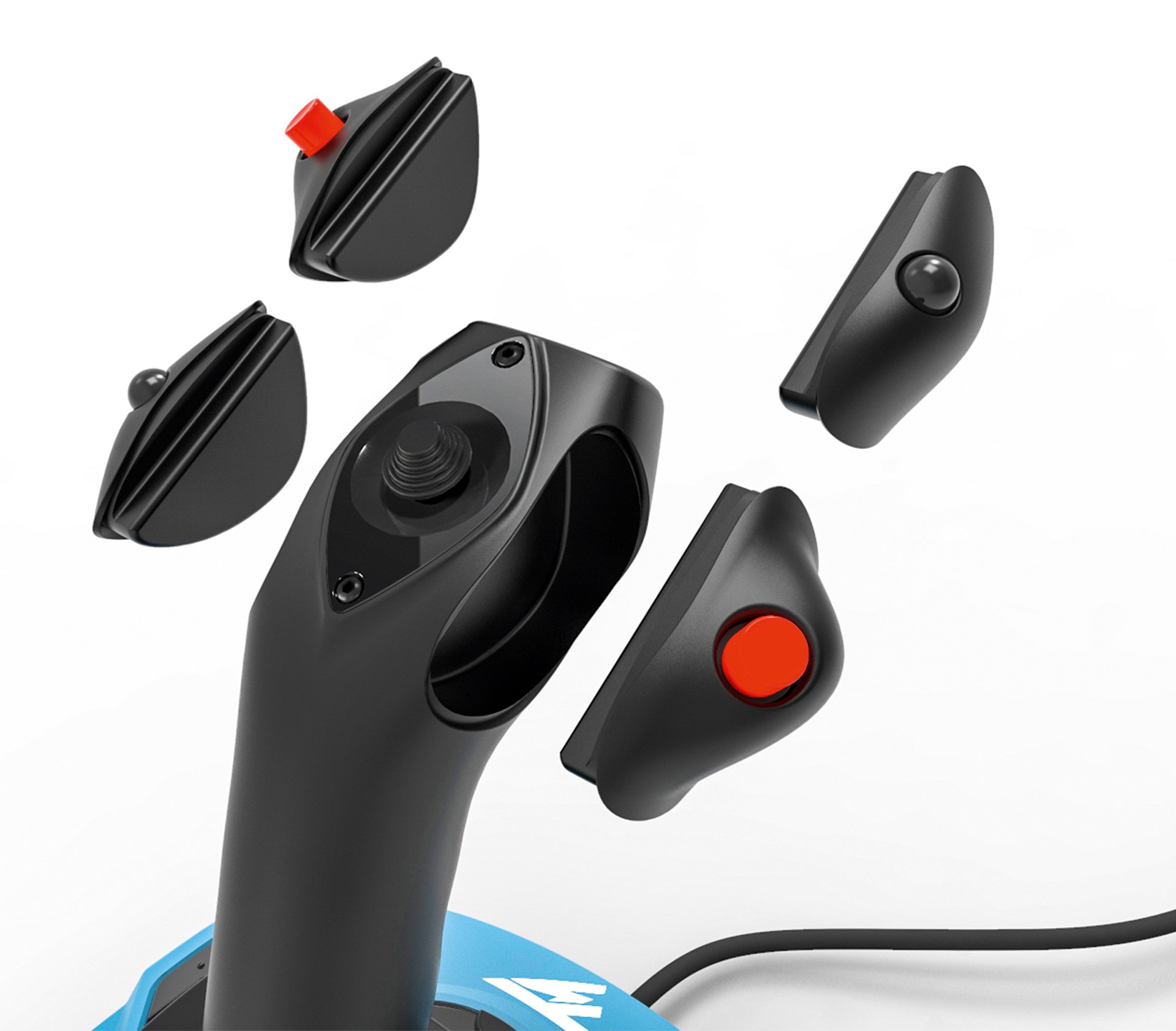 The joystick is designed to be fully ambidextrous and can be configured for left- or right-handed use by swapping out two button modules.

The joystick is fitted with eight rubber pads on the base, so it sits firmly on the desktop without the risk of slippage. There are also two M6 mounting points so it can be fixed to a table or unit, which makes it suitable for use in a home-built cockpit.

As an alternative to programming the peripherals using the default simulator assignments, Thrustmaster has provided an application called Thrustmaster Advanced pRogramming Graphical EdiTor (TARGET). Essentially, it is used to group compatible Thrustmaster peripherals, which can then be configured using custom profiles. For example, the TCA Sidestick can be grouped with the TPR rudder systems and custom profiles can then be created for all the main flight simulators. 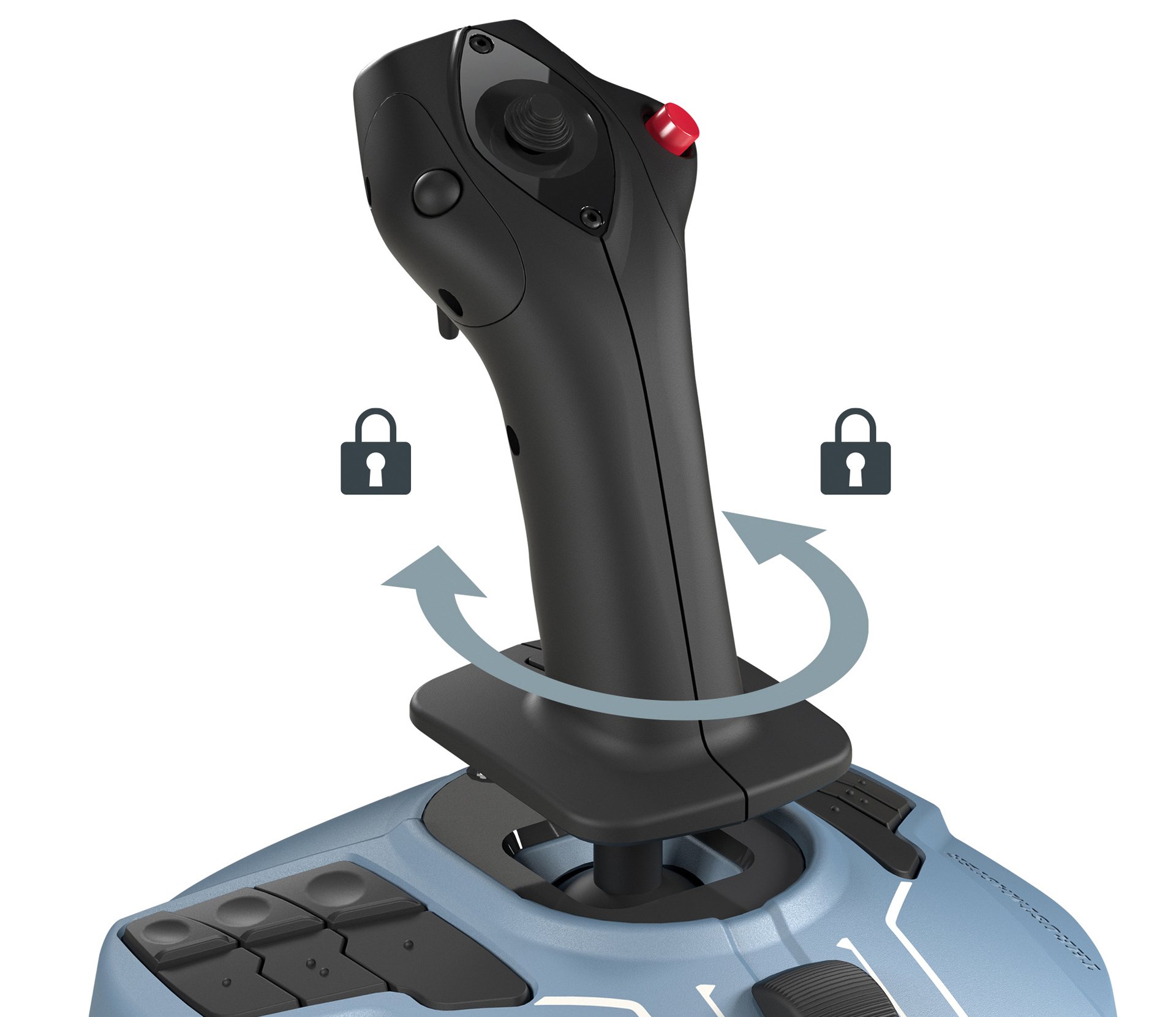 The TCA Sidestick features a twist rudder, which can be locked into position.

Installation is as easy as it comes. The TCA Sidestick is Plug & Play, so you simply connect the joystick to a USB port and it is automatically detected and ready for use. The unit works well across all the main simulator platforms including X-Plane, FSX, Prepar3D and the new Microsoft Flight Simulator. The control inputs are crisp and precise thanks to the Hall Effect sensors, although the self-centring forces are on the strong side where the movement of the stick on the actual Airbus is much more fluid. Throttle action is smooth but the travel is on the short side, which can make it difficult to achieve accurate power settings, so a dedicated throttle quadrant would help there. Additionally, I sometimes found it difficult to feel the detent for the reverse thrust and it is easy to accidentally slip past the idle stop, particularly in the heat of the moment. 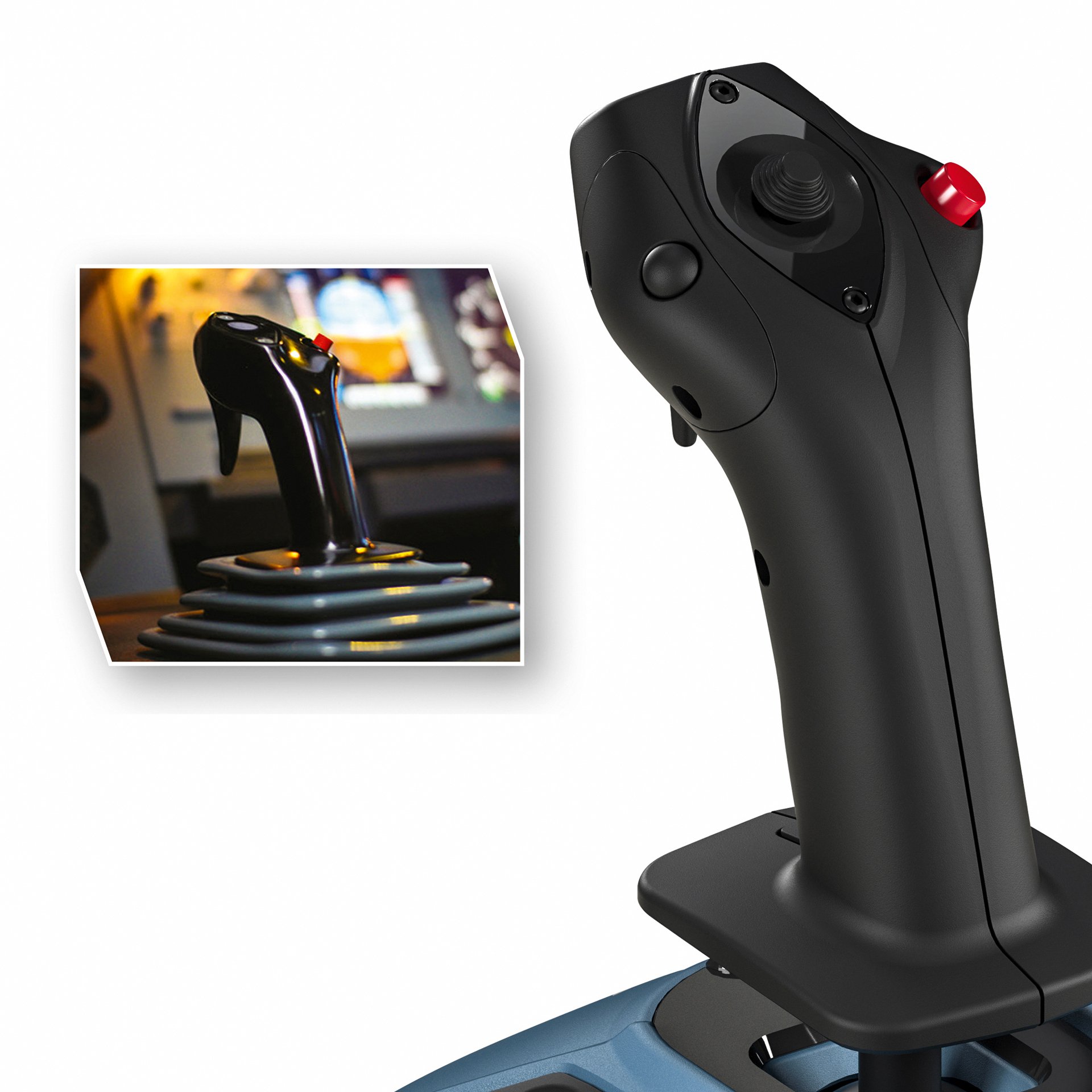 The TCA Sidestick is a 1:1 scale replica of the sidestick in an Airbus airliner.

But overall, the look and feel of the TCA Sidestick makes it very well suited for flying an Airbus, although it will of course work on any other aircraft. I always felt the classic T.16000M, also made by Thrustmaster, was an excellent Airbus sidestick and the TCA unit completes the experience perfectly. 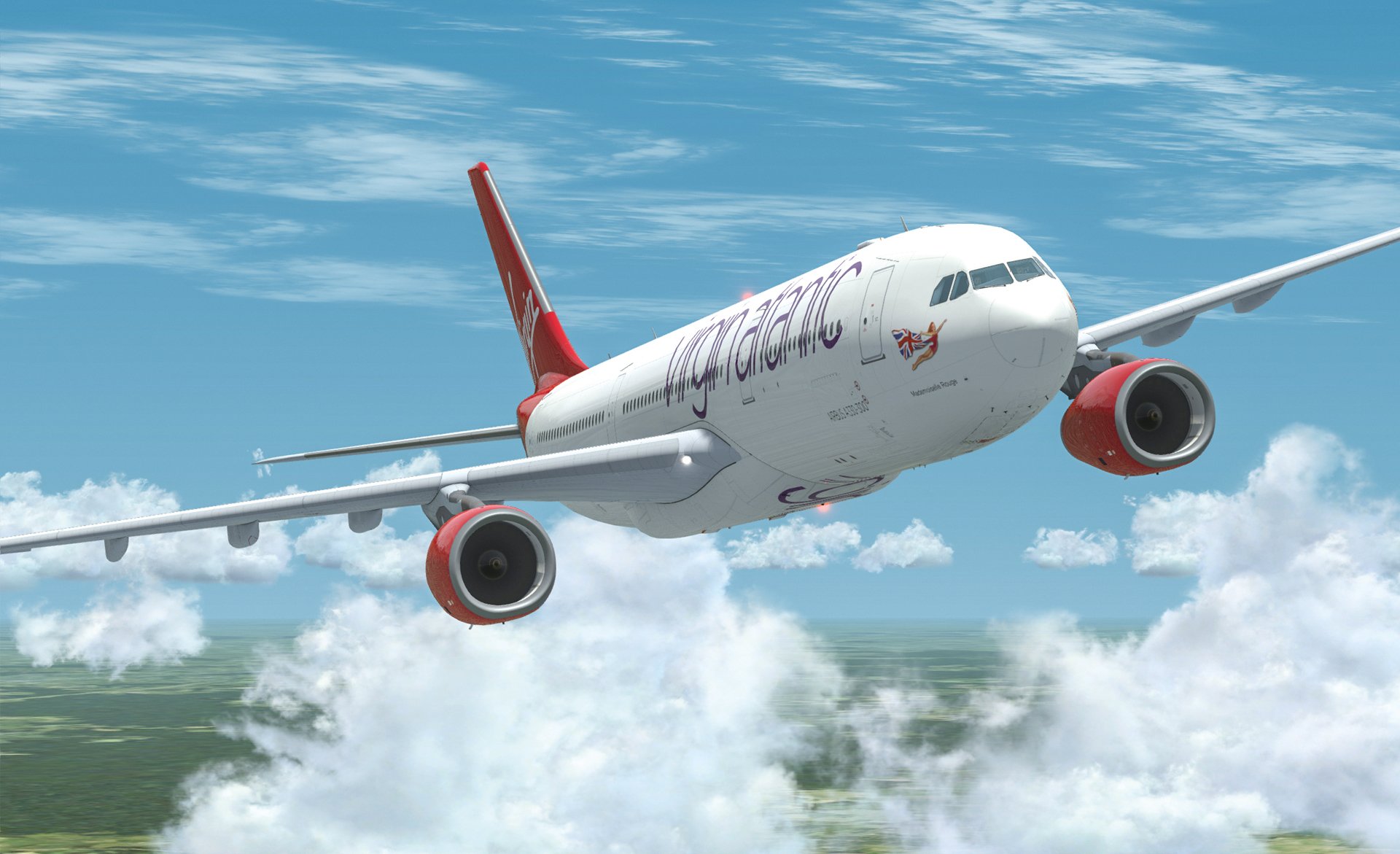 The look and feel of the TCA Sidestick makes it very well suited for flying Airbus jets such as Aerosoft’s A330 professional for Prepar3D.

The build quality of this unit is robust and the sturdy plastic casing looks like it can take a battering, so I see no reason why it will not last for years. Case in point, my old T.16000M has withstood years of heavy use including being subjected to many flight simulation shows and it still shows no sign of giving up the ghost.

Overall, Thrustmaster has done an excellent job with the TCA Sidestick. Although it is based on Airbus controls, it is equally suitable for other aircraft. Not only is it a great joystick for the beginner/intermediate flight simmer, but it is similarly at home in a custom-built Airbus flight deck, so it really can cater to everybody’s needs. And with a price tag of £64.99, it truly represents excellent value.

At a Glance: Combined with a solid build quality and good control feedback, the TCA Sidestick Airbus Edition provides an authentic flying experience at a very affordable price. 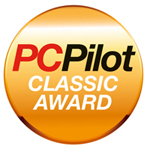 Thrustmaster is releasing additional products for the TCA lineup. These are now available on pre-order and are due out on September 24, 2020. These include: TCA Quadrant Airbus Edition, which will retail at £89.99/$99.99/€99.99.

TM Flying Clamp is compatible with Thrustmaster’s TCA product line as well as the T.16000M FCS HOTAS system from Thrustmaster. It can be used to secure the controllers securely with a quick removal mechanism. The Flying Clamp will retail at £54.99/$69.99/€59.99.

TCA Quadrant Add-On Airbus Edition is an expansion for the TCA Quadrant. More information such as the feature list, price point and release date will be announced later in the year. 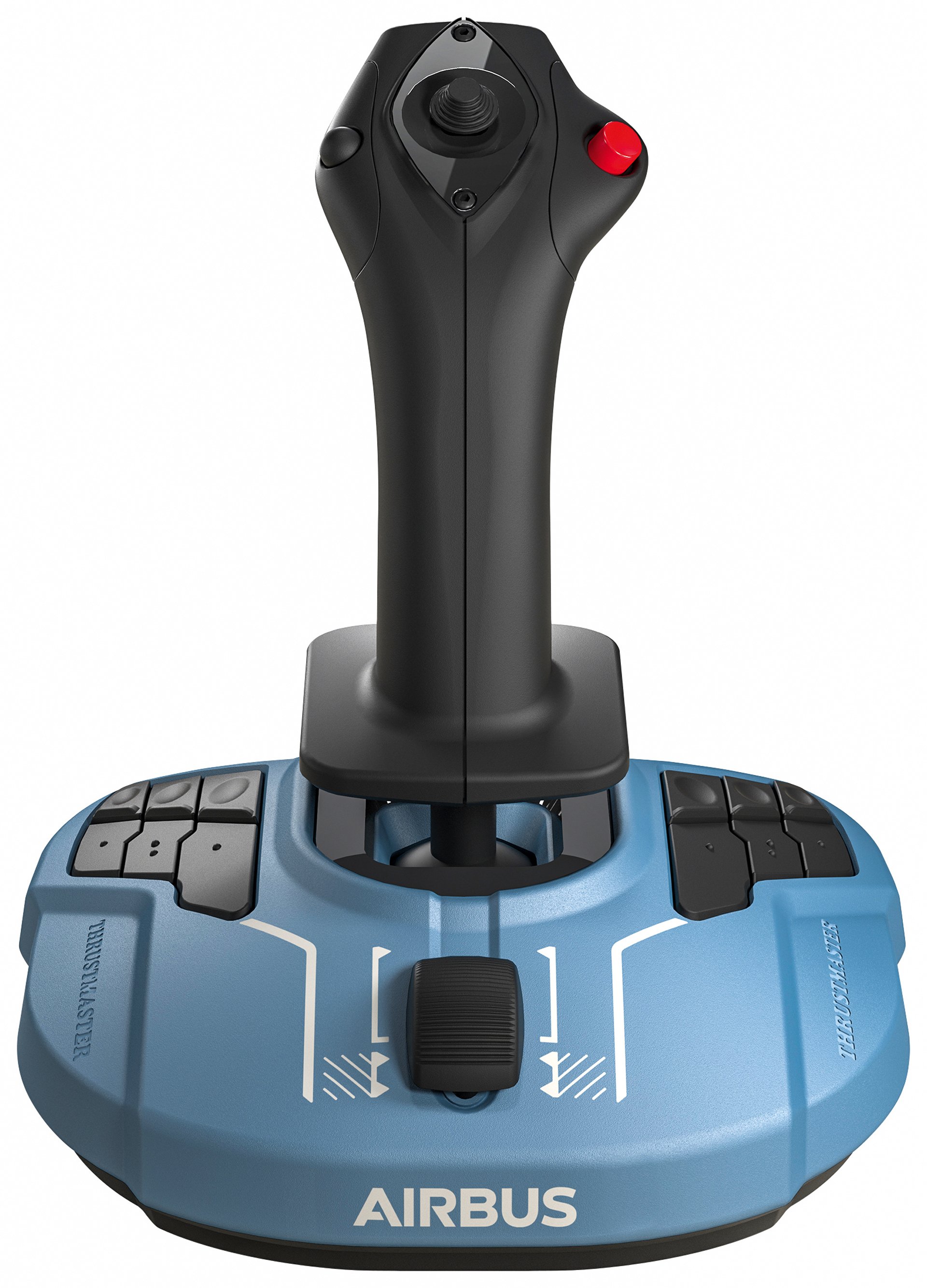 Like the T.16000M, the TCA Sidestick is built with Thrustmaster’s proprietary Hall Effect sensors for smooth and precise control inputs.

An interview with Thrustmaster

To get some background information on the TCA Sidestick Airbus Edition, we invited Thrustmaster to answer a few questions on the product.

PC Pilot: Thanks for agreeing to take part in this interview. May I begin by asking you what were your objectives with the TCA Sidestick?

Thrustmaster: Primarily, we wanted to replicate an iconic airliner sidestick for civil flight simmers and address a need that hadn’t yet been met. Collaboration with Airbus was the best fit for this purpose. We wanted to create a versatile and ergonomic design that functioned as a sidestick for captains (left-handed), first officers (right-handed) and also as a centre stick for light aircraft.

It was vital to offer the precision required by advanced gamers and balance price/quality to democratize our civil aviation peripherals without compromising on precision. We have made sure to offer all the features required for civil flight simulation including roll, pitch, yaw, throttle and reverse functionality, as well as enough buttons, a POV to trim all axes and allow the ideal camera to be selected to fly any aircraft in civil flight simulators. This versatility was also designed to extend to other flight sim genres, including space and military.

Above all, we wanted to ensure that the TCA Sidestick is the cornerstone of a complete civil flight sim peripheral ecosystem hence the name Thrustmaster Civil Aviation (TCA).

PC Pilot: Why did you decide to design a controller for the Airbus rather than other aircraft?

Thrustmaster: The current market offering is concentrated on light aircraft with a yoke that comes at a cost but does not adequately cater for setups with side and centre sticks, including airliners. We wanted to meet these demands that were not being served by the peripheral market.

Airbus is a name that is known worldwide and has a common sidestick found across all Airbus airliners. The comfortable shape allows for various adjustments and uses, and through our relationships with the company coming together at the right time, we were able to make the dream happen. The quickest way to travel around the world is on an airliner, even virtually. Piloting a real Airbus is a dream that is available to very few people and now that dream will be accessible virtually to many more.

PC Pilot: Who would you say is your primary target audience for the TCA product range?

Thrustmaster: Our primary audience is the core civil flight simmer base that flies simulators ranging from the more advanced titles such as X-Plane 11 to more accessible software like the Microsoft Flight Simulator series.

However, we built a product range that can cater to other needs as well; the TCA Airbus range is adapted for other flight simulator platforms thanks to the variety of functions and adjustable features on each product. Whether you are a right or left-handed simmer, a space sim fan or even a military enthusiast, this is a great way to play your favourite flight simulator with this product range.

PC Pilot: The TCA Sidestick appears to have some commonality with the T.16000M. What are the inherent differences and similarities between the two?

Thrustmaster: Most importantly, the handle is completely new and totally versatile, providing four ergonomic handle positions in one. The twist rudder can be locked, which is something that is not possible with the T.16000M and the throttle also offers the ability to reverse.

From a design perspective, the stick also of course uses the iconic Airbus colours and design features and crucially functions as part of the wider TCA hardware ecosystem.

PC Pilot: Thank you for talking with us, and we wish all the best with this new product.