The period following the 2017 Australian International Air Show at Avalon continues to be a busy time for the Australian Defence Force, with an expansion of capabilities.

Also in March came news the Royal Australian Air Force is acquiring at least four, and possibly eight, new King Airs via a yet to be announced leasing deal with industry.

Two Tiger ARHs from the Army’s 1st Aviation Regiment in Darwin and the School of Army Aviation in Oakey embarked on LHD HMAS Canberra in late February for a six-week series of trial, to be held off the east coast of Australia, from Townsville in North Queensland to Melbourne in Victoria.

The helicopters embarked on board Canberra while the vessel was alongside at Fleet Base East in Sydney Harbour, but at-sea trials (and subsequent cyclone relief operations) have been frustrated by problems involving the propulsion systems of the two LHDs.

Tiger operations are the first-of-class flight trials aboard the LHD and were expanded in April to include flight deck operations alongside two MRH 90 Taipans, as well as a Navy Sikorsky MH- 60R Seahawk. This will be the first time an aviation battle group will have operated together from the deck of an LHD. Trials will determine the safe operating limits of the ARH under a range of weather conditions and sea states.

Lieutenant Grant Thaler, a Flight Test Engineer with the Navy’s Aircraft Maintenance and Flight Trials Unit, said: “The Tiger is very capable from a handling qualities perspective and its handling characteristics are favourable in quite extreme wind conditions. I am interested to see how it copes with pitch and roll on deck.”

The trials are also being supported by three qualified Tiger test pilots from the 1st Aviation Regiment’s Trials Unit and Army Aviation Test and Evaluation Section.

Lt Thaler continued: “We are doing a full ship helicopter operating limitation development on all six flight deck spots. Last year, we conducted deck handling trials onboard sister ship HMAS Adelaide and one of the first things we’ll do here is continue to validate the deck handling and ship interface elements from that first trial.”

The company is the prime contractor for the joint Army-Navy HATS programme, under the aegis of Joint Project 9000 Phase 7. Fifteen H135 aircraft will be based at HMAS Albatross and operated by the ADF’s Joint Helicopter School. 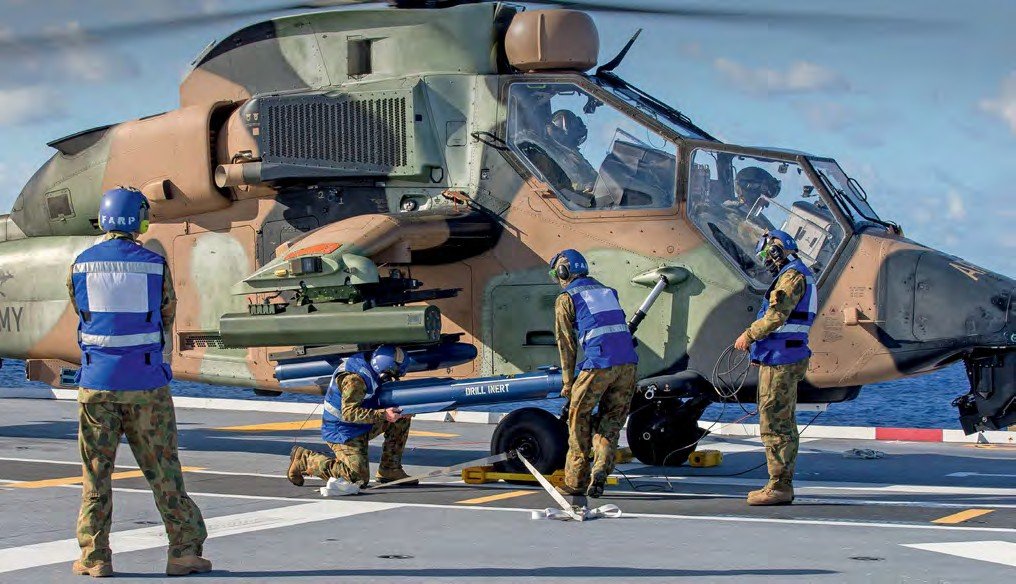 In November 2016, Airbus Helicopters announced it had achieved factory acceptance of the last six H135s for HATS. The first-of-class flight trials of the H135 aboard a ship will be conducted by Navy’s Aircraft Maintenance and Flight Trials Unit in September this year.

The HATS programme will deliver training for up to 150 ADF students per year, including Army and Navy pilots, Navy Aviation Warfare Officers (AvWO), aircrewmen and sensor operators. The H135 is replacing Army Kiowas and Navy AS350BA Ecureuils in the ADF helicopter training role.

Despite the progress with the HATS programme, the H135 was a notable absentee from the recent Avalon Air Show, where most of the new ADF capability was on display.

The Royal Australian Air Force is in the process of acquiring four new Beechcraft King Air 350 aircraft from Hawker Pacific in a lease deal that has yet to be publicly announced.

In response to questions, a spokesperson for the Australian Department of Defence said the aircraft will be operated by 32 Squadron at East Sale in Victoria, for the training of RAAF Air Combat Officers and Royal Australian Navy AvWOs.

The spokesperson said the new aircraft are being leased through the current King Air sustainment programme managed by Defence’s Capability Acquisition and Sustainment Group.

The aircraft will be delivered to East Sale during the course of the year and it is also understood that a further four will be acquired under a similar arrangement in 2018. The initial four aircraft have already been registered to Hawker Pacific and will be transferred to the State Register throughout the year.

The Royal Australian Air Force currently operates eight King Air 350s in the training role, fitted with the Rockwell Collins Proline 2 avionics system and a further eight, with the later Proline 21 cockpit. All 16 aircraft are operated by 38 Squadron at Townsville in the transport role.

The King Air fleet has been the subject of a review to consider the consolidation of operations within one squadron, most likely at East Sale, as the leases on aircraft expire over the next two years. This would see the fleet based on the Proline 21 cockpit. However, it is unclear how the new aircraft fit within this plan. Despite several attempts to clarify the situation, the Department of Defence has declined to answer any further questions on the subject.