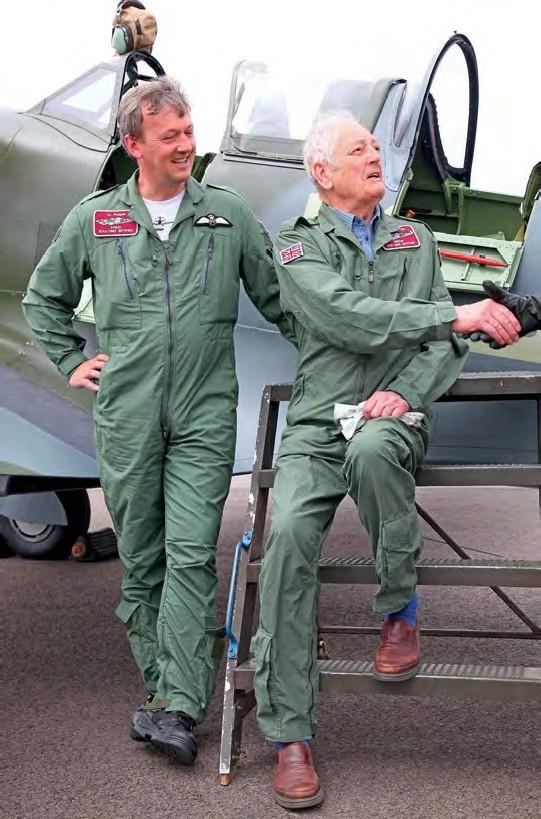 ‘Tim’ Elkington (right) at Oxford Airport after flying in Boultbee’s two-seat Spitfire, SM520, in July 2011. His pilot, Al Pinner, is on the left.
RICHARD PAVER

Battle of Britain veteran Wg Cdr John Francis ‘Tim’ Elkington died on 1 February at the age of 98. Born in Edgbaston, Birmingham on 23 December 1920, after schooling in Bedford and pilot training at Cranwell, Elkington joined No 1 Squadron on Hurricanes at Northolt on 15 July 1940, getting his first confirmed kill, a Bf 109, on 15 August 1940. The following day he was shot down and injured by Bf 109 pilot Maj Helmut Wick. Following recuperation, Elkington rejoined No 1 Squadron at Wittering on 1 October.

In July 1941 Elkington was posted to No 134 Squadron at Leconfield, and the following month embarked with the unit on HMS Argus, flying off the carrier in a Hurricane on 7 September bound for an airfield near Murmansk. He flew bomber escorts and helped train Soviet pilots to fly the type. On 6 October 1941, Elkington shared a Ju 88 kill over Vayenga. He returned to the UK in January 1942.

From April-August 1942 Elkington flew from Speke with the Merchant Ship Fighter Unit, and in September 1942 his varied Hurricane flying career took another interesting turn when he joined No 539 Squadron at Acklington, flying Hurricanes alongside Turbinlite Havocs on night interception operations.

Following the failure of the Turbinlite concept, 539 was disbanded and in late January 1943 Tim joined No 197 Squadron, flying operations from Tangmere on the Hawker Typhoon. He was posted overseas again to No 67 Squadron at Alipore, Calcutta in December 1943. Elkington then spent three years commanding the Air Fighting Training Unit at Amarda Road, returning home in October 1946. Promoted to squadron leader that year, Tim Elkington went on to fly Avro Shackletons, and became a wing commander in 1961. He retired from the RAF in 1975, and set up an art supply and picture-framing business.