Titan to Add Maiden Airbus A330 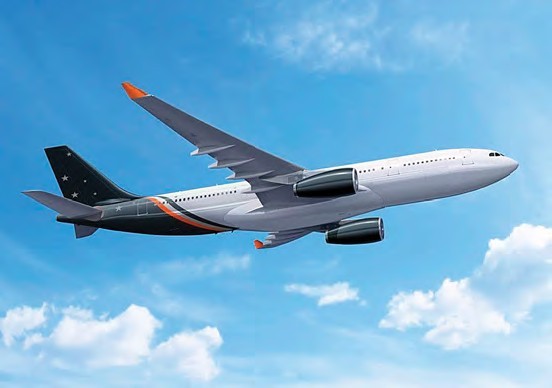 TITAN AIRWAYS is set to introduce an Airbus A330-200 as part of a wider effort to transition to an all-Airbus fleet.

The five-year-old airliner is to enter service with the charter and airline sub-charter specialist in April 2020.

The Airbus widebody – the first to be operated by the carrier – will be configured with a two-class cabin featuring 32 fully lie-flat beds in business class and seating for 206 economy class passengers.

The airline adds that all seats are “equipped with touchscreen in-flight entertainment and in-seat power, allowing passengers to charge their own devices”, while a crew rest area “extends the range of the aircraft to approximately 14.5 hours.”

The carrier has confirmed that the new acquisition will replace a 16-yearold Boeing 767-300ER, G-POWD (c/n 30847), as its largest aircraft. The move leaves the airline with four Boeing aircraft – two 757-200s and a pair of 737-400SF freighters – in its fleet, although it has previously been linked with an acquisition for Airbus A321P2Fs, with deliveries expected to begin in the fourth quarter of 2020.

Titan began its shift away from Boeing aircraft in January 2015, accepting the first of two A320-200s delivered that year. A 32-seat, all business class A318 was taken on from British Airways in 2017, with three former Niki A321s inducted last year.

Alastair Kiernan, the carrier’s business development director, said: “The A330 will fulfil longhaul requirements previously met by the 767, which we are retiring as we transition towards an all- Airbus fleet. We have selected this aircraft due to the very high standard of the cabin and the crew rest compartment, which will enable us to operate the aircraft to its maximum range. This should open up a wealth of new opportunities in the charter market.”

While the identity of the A330-200 remains to be formally confirmed by the wet-lease specialist, it is believed to be former Avianca example as the image of business class seating released by Titan in its October 16 statement bears striking similarities to the Colombian airline’s hard product.

The South American carrier returned two A330s – OE-IDV (c/n 1508) and N203SA (c/n 1608) – to their respective lessors earlier this year. Titan has stated it will operate the aircraft on lease for a minimum term of five-anda- half years and “anticipates strong demand for the new A330 aircraft from other airlines for wet/damp lease, ad-hoc charter and tour operator charter roles.” (Photo Titan Airways)