TOP END OF THE GAME

Widely credited as the Royal Australian Air Force’s most important exercise, the biennial Pitch Black was this year its largest and most complex to date. Roy Choo visits the ‘Top End’ to find out more.

A Su-30MKI of the Indian Air Force’s 102 Squadron flies in unrestricted airspace over the Northern Territory’s vast unoccupied bushland. Serial SB307 was one of four IAF ‘Flankers’ deployed to Exercise Pitch Black 2018. 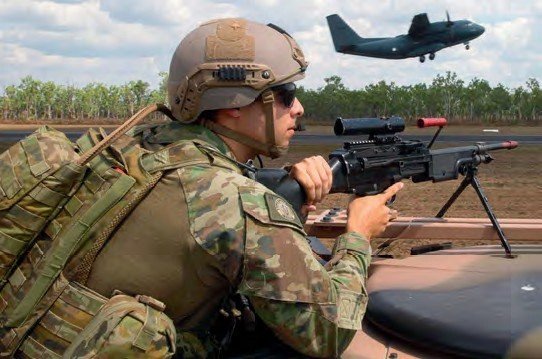 An Australian Army soldier protects Batchelor Airfield in the Northern Territory as a C-27J aircraft takes off. Making its Pitch Black debut, the C-27J was operated in austere environments, supporting insertion of special forces to capture airfields and establish forward operating bases. Commonwealth of Australia

For much of August, Territorians – as the residents of Australia’s Northern Territory are known – experienced the thunderous reverberations of fast jets. During the three weeks from July 27 to August 17, the skies over the region played host to the southern hemisphere’s largest air combat manoeuvres and the Royal Australian Air Force’s (RAAF’s) premier exercise.