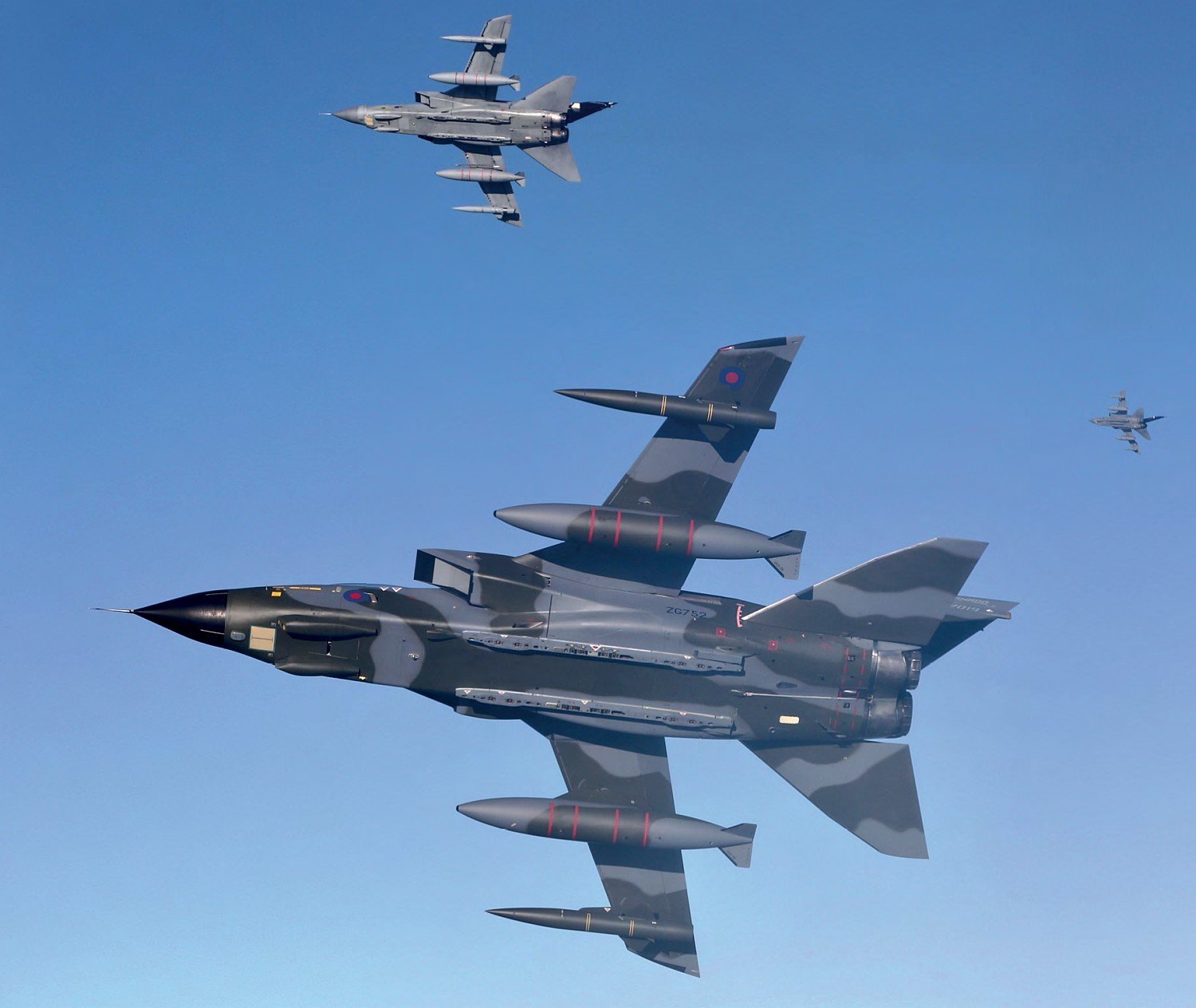 On Saturday January 26, 2019, RAF Tornado GR4s carried out one of their last airstrikes against ISIS before redeployment to RAF Marham on February 4 and 5, 2019. During that mission ZG791/137 ASCOT 9951 and ZA463/028 ASCOT 9952 dropped two Paveway IVs and fired two Brimstone missiles at a large group of ISIS terrorists hiding in three small buildings in farmland near the village of Baghouz, Deir ez-Zor. Shortly after the Tornados’ attack, US Air Force B-1B Lancer bombers flying from Al-Udeid Air Base bombed the site; 42 ISIS terrorists and 13 of their family members were killed.

The very last RAPTOR mission was flown on January 27 and the final Paveway IV strike mission was in the late afternoon of January 28 over Syria. The two aircraft involved were ZD848 ASCOT 9954 and ZA587 ASCOT 9953. The last Tornado GR4 patrols conducted under Operation Shader took place between 07:30Z and 14:00Z on January 31, 2019.

Two days before, on January 29, Typhoon FGR4s on Operation Shader began carrying a single Brimstone missile on each outboard pylon, and in doing so removed the need for the Tornado GR4 in theatre. Finally, the Typhoon was capable of deploying each of the Tornado GR4’s weapon types.

Before returning to the United Kingdom, both Wing Commander James Heeps, Officer Commanding IX(B) Squadron and Wing Commander Matthew Bressani, Officer Commanding 31 Squadron, expressed their pride in leading the final Tornado mission, and their relief for returning ‘in good order’. What was historically important about the final missions was the fact it was joint in nature; each of the final two Tornado GR4 squadrons completed it together.

Wg Cdr Heeps confirmed the mission had a different feeling to normal: “There was an end of term feeling if you like but we still had a job to do and air power to deliver. We did that, refuelled and on to task on the Iraq-Syria border for three hours. The fact that it was a quiet mission is a positive thing. If we returned today with no bombs, you could say there is still a job to be done here. Things have moved on a lot since we came here, with Islamic State now restricted to a small area. We are very proud to have been part of that international coalition effort. The Tornado has been an icon of the Royal Air Force for almost 40 years since it entered service in 1982. I remember watching the Gulf War in 1991 and I never imagined that 30 years later, I would be here [RAF Akrotiri] as one of the final two squadron commanders taking the type out of service from operations. For over a third of the Royal Air Force’s existence, this aircraft has been the back bone of the ground attack fleet and so in the history of the service, this is a big day. Tornado has been the largest of the ground attack fleet within the Royal Air Force for all that time. Its role has changed over time and the aircraft has adapted to stay at the forefront of air power.”

Commenting on the mission itself Wg Cdr Bressani said: “It was a very quiet day but it’s not every day we’re going out and engaging kinetically with the enemy, but air power is more than just dropping weapons. We spent our time doing intelligence surveillance and reconnaissance, which is one of our key roles. You only have to look at the footprint Islamic State had back in the later part of 2014 when this caliphate began, and early 2015 when they covered most of northern Syria and Iraq, and compare it to now when we are dealing with a small area near the Iraq-Syria border. Tornado’s legacy is the fact that it has been the backbone of the RAF’s strike capability for over one third of the Air Force’s life.”

When asked whether the TGRF had undertaken any one mission that was head and shoulders above the rest, Gp Capt Townsend highlighted how a reduced number of aircrew had flown a lot of missions. He said: “There are a number of aircrew who have flown over 200 missions just on Shader, with an average sortie duration of six hours, that is a significant amount of operational flying. Aircrews have been busy on all missions, so it takes a toll on individuals. Physiotherapists have been busy tending to aircrew to ensure their necks remain injury free and ensure you’re not getting any kind of spinal injury from six-hour missions wearing a helmet and NVGs. The most notable aspect of Shader is the number of sorties flown.

Operational experience across the force at the end of the Tornado’s service life is really good. Townsend went on to say: “We have been flying all of our missions at medium-level using a very different weapons set. Our pilot’s and weapons systems operators’ skills were well honed and tuned to what they need to do. If you consider the type of weapons Tornado had when it entered service compared to those it carried at its retirement, the jet could be called upon to conduct a range of complex missions using Paveway IV and Brimstone. Collateral damage, rules of engagement, and the complexity of scenarios flown on Shader were very different to those the Force conducted in the Balkans, Middle East, Libya, and Afghanistan. It’s been an evolution of our capabilities. We are a more effective Air Force today and our aircrew have considerable operational experience.”

Staged to mark the disbandment of IX(B) and 31 Squadrons, this final flight marked the end of RAF Tornado operations. The fate of ZA463 has not been announced.

The Tornado Interdiction Strike variant, the GR series in UK terminology, carved its name in Royal Air Force history in five major combat operations during its 37 years of service. There were many impressive examples of combat prowess, most notable were the three Storm Shadow strike missions against Libya launched from RAF Marham during the first week of the air campaign conducted under Operation Ellamy in March 2011. Those three missions demonstrated to the world the TGRF’s ability to conduct long-range precision strikes, in this case to another continent. No other RAF strike platform held such capability until the Storm Shadow missile was integrated on Typhoon FGR4.

The type’s participation in Operation Shader saved the lives of thousands of innocent people and took those of hundreds of evil ISIS terrorists. The aircraft, aircrew and maintainers justly deserve to have their names recorded in the history of the UK’s air war on terror. The Tornado GR Force remained the backbone of the Royal Air Force right up to its retirement – one team providing lethal strike like no other.

Fin, Torn or Tonka, whatever colloquial name used, the Tornado GR1 and Tornado GR4 were aircraft the UK depended upon on numerous occasions. For 37 years, Tornado delivered and must surely be classed in the same way as the legendary Hurricane, Lancaster and Spitfire.