Triple Sevens have been delivered to more than 60 operators worldwide. Emirates has more in service than any other airline, with 142 as of early August 2017. Other carriers flying the type in large numbers include United Airlines (88), Air France (70), Cathay Pacific Airways (70), American Airlines (67), British Airways (58), Qatar Airways (55) and Singapore Airlines (53).

With a popular product on its hands and such a large installed customer base, it isn’t surprising Boeing has sought to improve the 777’s performance over the years.

In 2009, the company introduced a Performance Improvement Package (PIP) for the 777-200, 777-200ER and 777-300. At that time, although production of the 777-200 and 777-300 had ended and the 777-200ER’s orders backlog was dwindling (there are currently no unfilled orders but Boeing still markets the variant, hence its inclusion on the characteristics table in this feature), it was realised some technologies developed for the 777-300ER were retrofittable to these earlier models.

The 2009 PIP for the 777-200, 777-200ER and 777-300 introduced three key changes. The first was an upgraded ram-air turbine system to provide improved control of airflow and thrust recovery. The second change was a drooped aileron, a software-based modification designed to create a higher aerodynamic loading on the outboard wing to make the loading more elliptical and cut drag. The third change was the replacement of 32 vortex generators by smaller 737-type vortex generators to further reduce drag around the wing.

After the 2009 PIP, Boeing engineers turned their attention to improving the 777-300ER, 777- 200LR and 777 Freighter. Changes for these models in three areas – aerodynamics, weight and the GE Aviation GE90-115 turbofan engines – were subsequently brought out into a PIP announced in 2015.

One of the most important aerodynamic changes in the 2015 PIP was the deletion of the rear fuselage tailskid. Terry Beazhold, Vice-President and Chief Engineer for the Boeing 777X, told AIR International a new control law for the fly-by-wire flight control system (FCS) was developed. This software senses the location of the aft fuselage relative to the runway. If the system detects a potential tailstrike it commands the elevators to generate nose-down pitch to prevent the tail striking the ground. The software enabled Boeing to remove the tailskid and improve aerodynamic efficiency around the rear fuselage.

Another aerodynamic change introduced in the 2015 PIP was a divergent trailing edge. This involved adding a device to the underside of the wing outboard of the ailerons. This device increases the camber (or the asymmetry between a wing’s top and bottom surfaces), which in turn increases airflow over the wing.

The divergent trailing edge is indicative of Boeing’s wider design philosophy for the wings on its widebody aircraft, which is to maximise airflow over the aerofoil. The same philosophy accounts for why the 777 and the 787 have raked wingtips rather than the wingtip fences or winglets favoured by competitor Airbus.

Wind tunnel and computational fluid dynamics analysis of the wing indicated there was an opportunity to reduce drag in other areas. The aerodynamics changes in the 2015 PIP additionally involved smoothing out the inboard flap track fairings using what Beazhold described as a “tighter wrap” of the fairing into the wing.

Attention was also paid to cutting drag on the fuselage. Beazhold said: “Believe it or not, with all those windows, a little step, a little mismatch between the window and the skin creates drag. We redesigned it to provide a much more consistent, flush window-to-skin interface.”

Further drag reduction was achieved around the tail. “We found we could reduce drag by designing a better seal to close out some of the gaps around the elevator and the horizontal stabiliser,” Beazhold said. The pitch trim software logic in the FCS was also revised, enabling the elevator to augment the stabiliser trim during the cruise to cut drag. 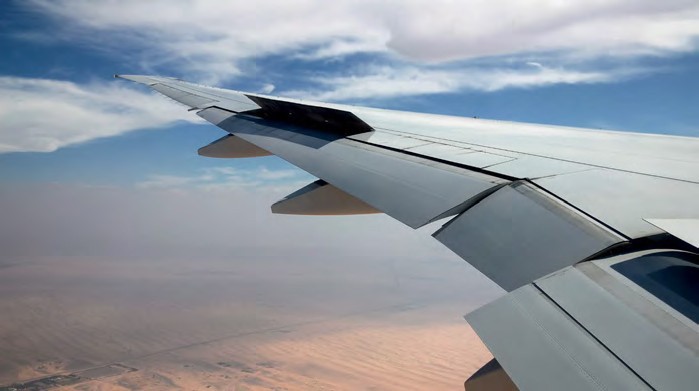 The 2015 Performance Improvement Package includes a divergent trailing edge, which increases the camber (or the asymmetry between a wing’s top and bottom surfaces) to maximise airflow over the wing.
Mehrad Watson/AirTeamImages

The second element of the 2015 PIP involved modifying the 777-300ER’s structure to reduce weight by changing the side of the fuselage body and the architecture of the crown area (the space inside the aircraft above the cabin and beneath the aircraft skin).

Overall, Boeing says a 777-300ER built today is now approximately 1,200lb (544kg) lighter when compared to the first aircraft delivered to customers in 2004.

The GE90 turbofan was developed by manufacturer GE Aviation specifically for the 777; it was the first commercial aircraft engine to use carbon fibre composite fan blades. The engine achieved 40 million hours of operational use in 2014, just four years after it passed the 20 million hours mark.

The GE90 has proven to be highly efficient and reliable. The company says fuel burn on the 115,000lb (511kN) GE90-115B variant developed for the 777-300ER proved to be 3.6% better than what it committed to during development and that the variant has a dispatch reliability of 99.8%.

GE Aviation continually invested in the GE90-115B following its service entry, spending $50 million annually on component improvements, so with this background of continued investment it was little wonder the company worked on improvements to the engine as part of the 2015 PIP.

The resulting Fuel Burn Upgrade package for the GE90-115B consists of several enhancements, drawing on technologies developed for the company’s next-generation GEnx and Passport engines.

Boeing claims that should 777-300ER, 777-200LR and 777F operators introduce all the key aerodynamic improvements, weight reduction measures and engine changes of the 2015 PIP, they will see at least a 2% reduction in fuel burn per trip and a 5% reduction in per-seat costs compared to older 777 variants. The GE spokesman told AIR International the improvements to the GE90-115B account for about 0.5% of the 2% fuel burn saving.

The 2015 PIP is available not just as the standard configuration for the 777-300ER, 777-200LR and 777F still in production but also as a retrofit for in-service aircraft. In July 2016 Boeing announced Qatar Airways as the launch customer for the PIP. The Gulf airline is to upgrade all of its Triple Sevens with the improvements.

The GE Aviation spokesman added: “GE Aviation is also offering an engine upgrade kit with the HPT ACC manifold and an optional core compartment cooling valve that can be installed during a routine shop visit. About 1,800 GE90-115B engines can benefit from the package.”

Qatar Airways was the launch customer for the 2015 Performance Improvement Package, which will be applied to all its 777- 300ERs. Here 777-3DZ/ER A7-BAE (c/n 36104), wearing the special FC Barcelona livery, departs London Heathrow.
Ashley Stevens/AirTeamImages

Beazhold noted: “The 777X, even though it’s a derivative, is substantially different.” The 777-8 and 777-9 will feature new-generation GE9X engines, an all-composite fourthgeneration wing, aerodynamics and flightdeck improvements and a new interior.

Nevertheless, with the current-series Triple Seven the design baseline for the 777X, Beazhold emphasised the technology initially developed for the 777-300ER has contributed to the new generation. The 777-9 will be 251ft 9in (76.7m) in length, around 7ft (2.1m) longer than the 777-300ER, which means the issue of tailstrikes during rotation on take-off and during flare on landing was a major design consideration for the 777X.

Beazhold said: “The 777X configuration tended to want the tailskid back on, so our flight scientists and flight controls team went about developing a more sophisticated control law that would perform an electronic, virtual tailskid. Our starting point was the [tailskid technology] 777-300ER.”

However, in a repeat of what happened in the 2009 PIP when 777-300ER technology was rolled into earlier aircraft, the currentseries Triple Sevens have benefitted from work under way on newer models too; some of the improvements in the 2015 PIP were actually developed for the 777X first.

Beazhold explained: “For example, the divergent trailing edge was technology our flight sciences were developing [for the 777X]. When we started looking at the higher performance and technology of that aerodynamic shape it became apparent we could do something very similar on the 777- 300ER.”

This is indicative of Boeing’s overall approach to designing and developing airliners. Beazhold said: “A lot of [developments] show up on different models at different times; we’re really looking at how we continuously improve our whole family. There’s a lot of cross-development between the different models.”

Another example of this crossover is the divergent trailing edge development on the 777-300ER, which provided the basis not just for the 777 but also for the stretched 787-10 variant of the Dreamliner. 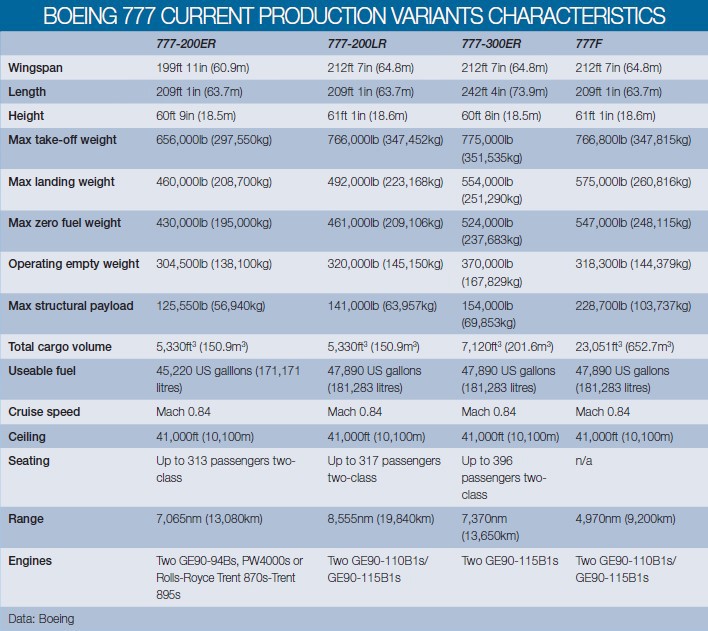 In June 2017 Boeing announced the 777 Freighter will be the platform used in the next edition of the company’s ongoing eco Demonstrator programme that evaluates emerging airframe, aerodynamics and systems technologies.

The tests will take place over a three-month period in 2018 using a FedEx 777F. They will involve installing a compact thrust reverser developed by Boeing to save fuel, flight deck improvements to improve efficient operations in and out of busy airports, and verifying parts produced using new manufacturing techniques designed to reduce material waste.

There have been four previous editions of the ecoDemonstrator (using a Boeing 737- 800, 787-8, 757-300 and most recently an Embraer E175). The programme has resulted in technologies being put into existing or new aircraft development programmes – for instance several airframe technologies went into the 737 MAX and the 787-8 testing moved forward work on autoland systems – so that could be the case for the 777 too.

Beazhold commented: “The ecoDemonstrator is a great validation and verification vehicle for features and technologies we bring into that aircraft. As we develop knowledge, we’ll take it back into our models; if there’s something that provides [a benefit] we’ll look at it.”