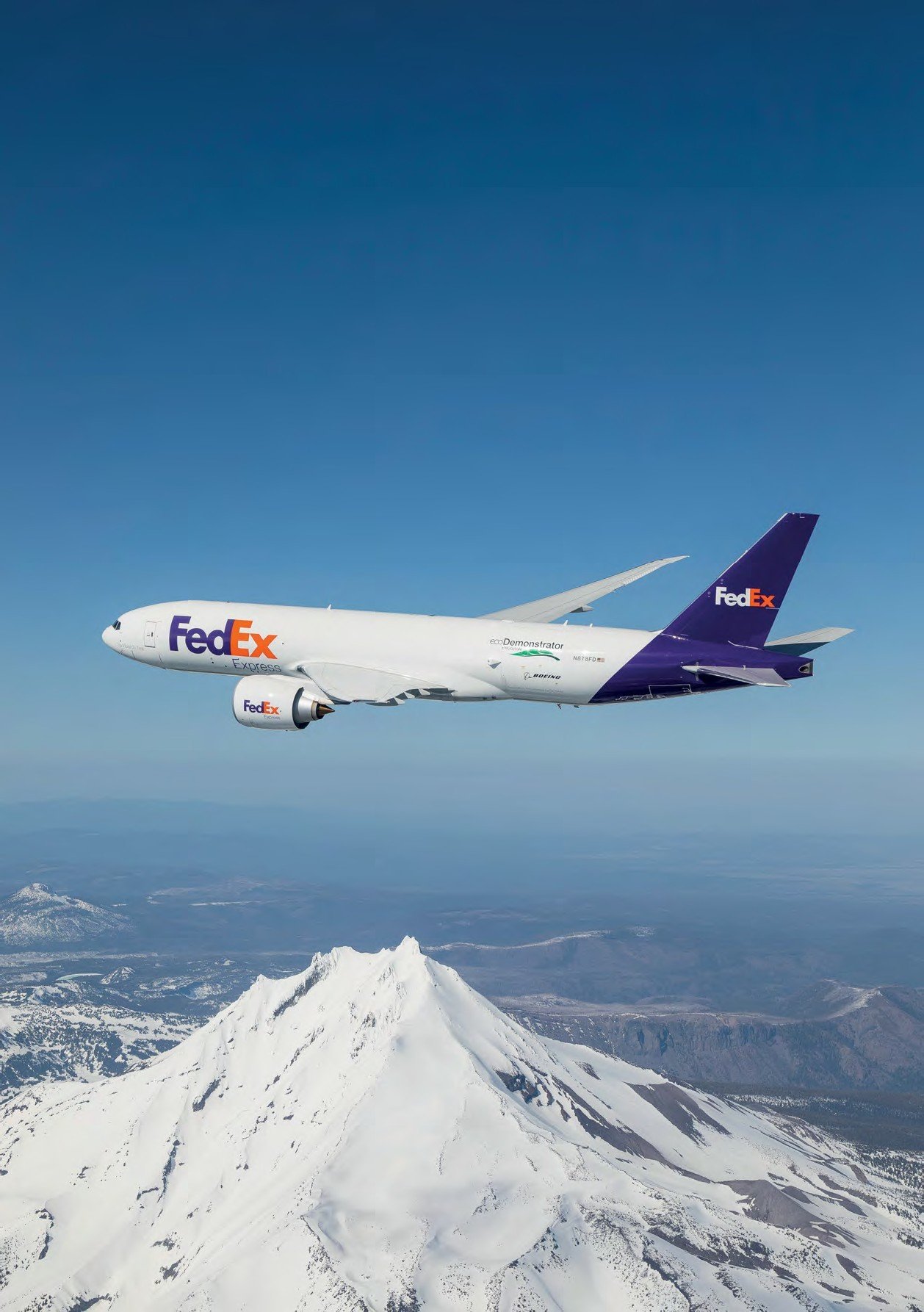 Jeanne Yu, Boeing Commercial Airplanes’ Director of Environmental Performance, told AIR International: “We’ve found the ecoDemonstrator aircraft have really helped us innovate and explore. We’ve now tested 108 different technologies. I’d say close to a third of them have transitioned onto products, a third of them are on their way [to a product] and a third of them we’ve accomplished the learning and we’ve started work.”

Each phase of the ecoDemonstrator is a partnership with other organisations from around the industry. Partners involved in the programme to date have included airlines such as American Airlines and TUI, other original equipment manufacturers like Embraer and Rolls-Royce, systems suppliers such as Collins Aerospace (formerly Rockwell Collins) and the public bodies NASA and the Federal Aviation Administration. Yu said: “Collaboration has been key. Working with partners to raise the overall level of technology innovation and knowledge has helped us go faster.”

The 2018 ecoDemonstrator once again saw Boeing team up with several partners. FedEx Express supplied the 777F used as the testbed, and other parties involved this time included the Japan Aerospace Exploration Agency (JAXA), Safran and Embraer. In all, 37 technologies were tested aboard the Triple Seven spanning propulsion, materials, flight deck enhancements and effcient flight operations.

The 777F involved in the ecoDemonstrator was only delivered to the airline in October 2017, the jet returning to Boeing in January 2018 for outfitting with the sensors and parts being tested. It then flew as the ecoDemonstrator for around three months before being stripped of all test equipment and returned to FedEx in June 2018 to resume its normal freighter operations. 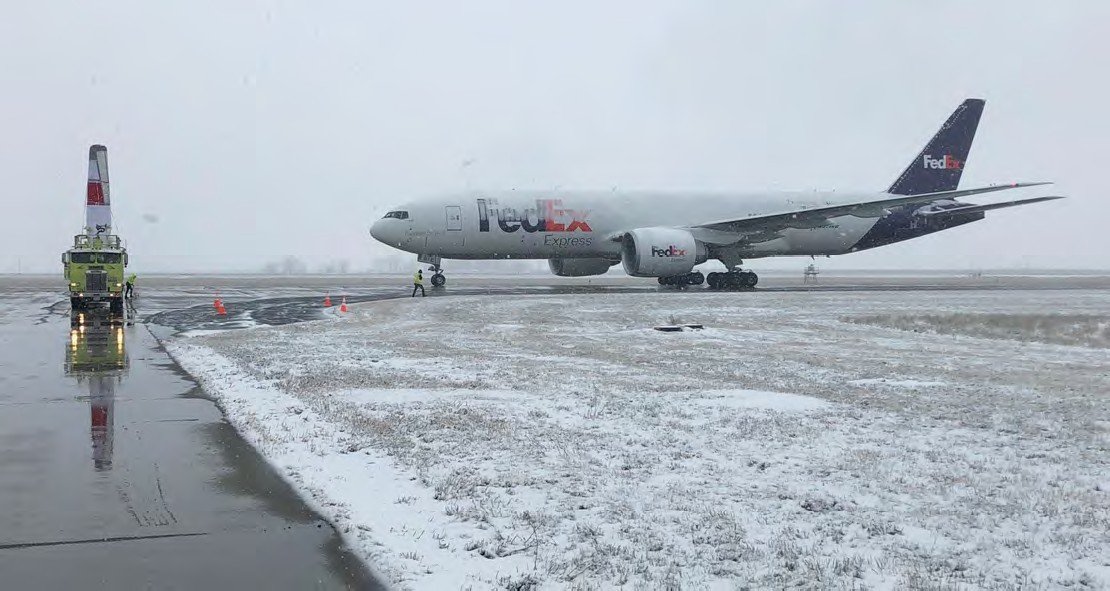 The 777F approaches an inflatable pylon used during the ground tests of the Surface Operations and Collision Avoidance System at a wintry Glasgow Airport in Montana.
Boeing

One key technology tested on the ecoDemonstrator 777F was a new, Boeingdesigned thrust reverser. Turbofan engine fan sizes are getting larger to provide more thrust, but this means the other engine components such as nacelles, cowlings and thrust reversers are also becoming larger.

Christensen said: “We have to find a way to keep them smaller; they can’t just grow along with the fan diameter,” because of course larger parts add weight and create drag.

For the 2018 ecoDemonstrator Boeing developed a prototype of a new, more compact thrust reverser, which uses some thermoplastic parts to cut weight and works with less hardware to reduce drag while the thruster is not deployed. Christensen said: “We demonstrated on this aircraft the ability to configure that thrust reverser to a General Electric GE90 engine [the 777’s engine] and test it to make sure it had the same stopping power as a conventional thrust reverser.”

The 777F was also fitted with a complete electrical channel supplied by Safran Electrical and Power, encompassing electric power generation and distribution systems, engine and aircraft wiring and electric fans.

Safran said: “Through collaboration with the Boeing team, Safran Electrical and Power has designed and developed one of the fastest flight-worthy electrical channels for civil aircraft. This solution is unique in the market and allows future optimisation of the full aircraft electrical system.”

According to Safran, the system has a single distribution panel managing all functions for control, protection, monitoring and recording of the aircraft’s electrical network, and an electrical fan for cooling and cabin ventilation. Safran claims a variable-frequency geared power generator on the system reduces thermal losses by 60% and saves 15% in weight compared to the existing power-generation system on the 777.

Yu said: “[Safran] had planned to work with us over a four-year period to develop a capability to help us be more energyefficient with regard to loads on the engine. They actually shortened their programme from four years to 18 months because of the ecoDemonstrator Programme.”

The 777 ecoDemonstrator was responsible for a significant first: it was the first commercial airliner to fly using only alternative fuel. Biofuel demonstrations typically go up to 50% biofuel blended with conventional Jet A-1, but the FedEx 777 flew with 100% biofuel for some of its test flights.

The aircraft carried an additivelymanufactured tail fin cap with NASAintegrated components. Christensen explained: “A part in the auxiliary power unit compartment was 3-D printed out of titanium. Not only is it lighter and a more efficient design, it’s also about waste.

Boeing said it is, “always looking for ways to reduce manufacturing waste or use recycled material and …testing methods for reusing manufacturing by-products and bringing the material back as high-value materials for new aircraft”. To this end, the 777F ecoDemonstrator flew with a part made with recycled titanium, a technology developed by Boeing in Russia and integrated on the aircraft in collaboration with Embraer. 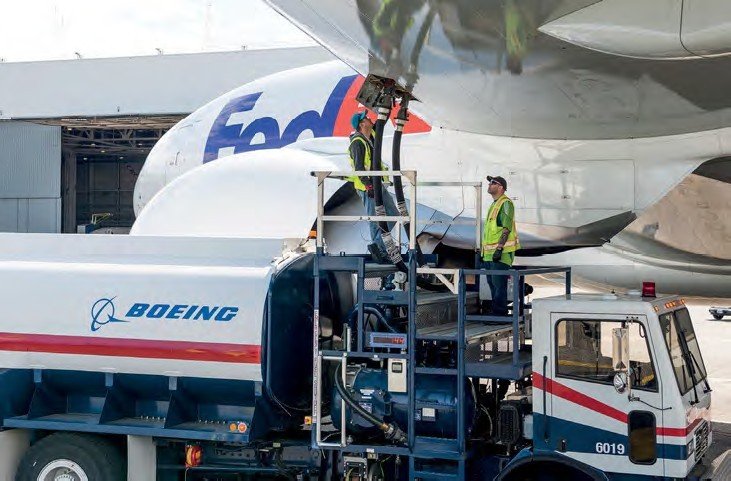 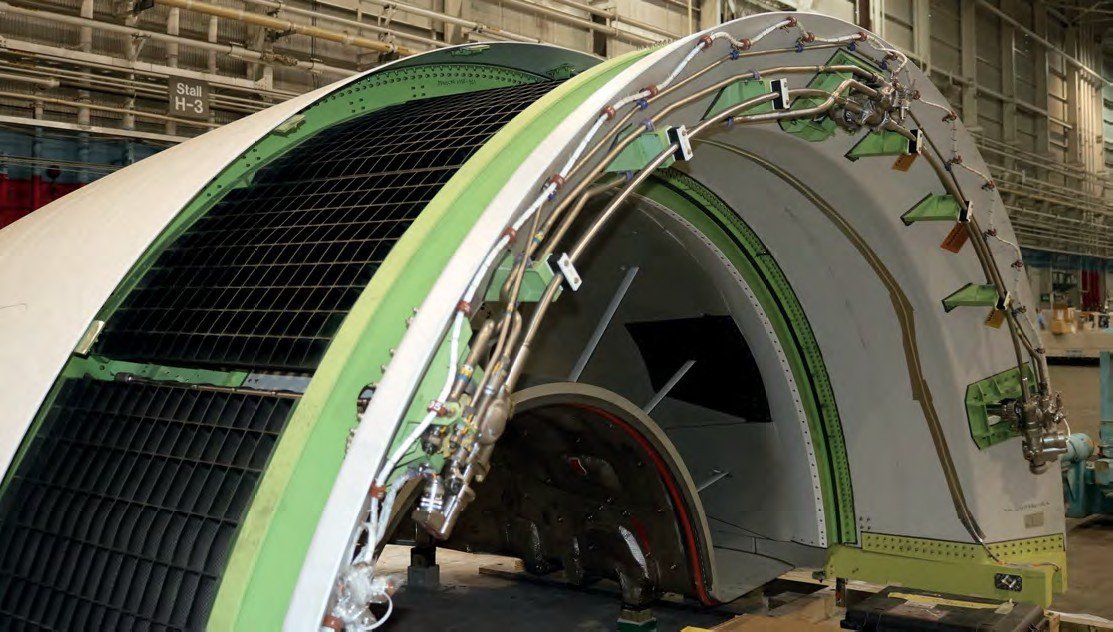 A more compact thrust reverser which uses some thermoplastic parts to cut weight was a key part tested in the 2018 ecoDemonstrator.

The ecoDemonstrator Programme’s efforts to improve environmental performance do not just involve aircraft parts, but also ways of improving the efficiency of flight operations.

The 2018 edition tested a synthetic instrument landing system (ILS). Traditional ILS uses a radio beam transmitted from the ground, but Christensen said: “It can be trouble, it can go down or get blocked by other aircraft.”

By contrast, synthetic ILS uses satellite information in the form of GPS signals to create the approach line for the aircraft’s systems. Christensen explained: “It uses a GPS-based system to position the aircraft just like it would an ILS beam. The pilot sees the same indications [on the flight deck], the only difference is the indicator is using the satellite rather than the ILS beam. It’s not affected by weather, by things going on at the airport. It allows operators to have a more consistent way of getting into the airport.”

Boeing says the improved accuracy provided by the satellite-based data could enable tighter spacing between aircraft on approach and therefore more efficient operations for both airlines and airports, especially at peak times.

When an aircraft flies, additional lift is created in the air by the vortex it leaves behind it. Christensen said: “You actually get free lift from the aircraft ahead of you. It’s like what the birds do, there’s efficiencies from flying behind that lead [aircraft].”

The 2018 ecoDemonstrator tested a new prediction algorithm to detect the wake turbulence left by an aircraft flying ahead. This algorithm uses a surveillance function provided by Aviation Communication and Surveillance Systems (ACSS), a joint venture between L3 and Thales.

The tests saw the 777F flown behind another FedEx 777F. Christensen said: “We demonstrated the ability to predict where the wake is from and then position the aircraft safely and ‘surf’ the wake to reduce fuel burn.”

This was the first demonstration of the Boeing-developed algorithm. Christensen said: “Part of the testing and analysis is working out where’s the best position [to ride the wave] and how can we position the aircraft. Depending upon where you position yourself on that wave you could get a five to ten per cent improvement in fuel burn.”

Technology improving awareness about the positioning of airliners in the airways would clearly assist in efficient navigation and route management, so, separate to the wake turbulence work, the ecoDemonstrator 777F was also used to acquire data that will be used to develop the Airborne Collision Avoidance System (ACAS X) standard. This next enhancement of the TCAS II (Traffic Collision and Avoidance System) standard is designed to enhance flight safety, improve navigation aids and provide efficient route management and fuel optimisation. Another surveillance function supplied by ACSS supported this work. 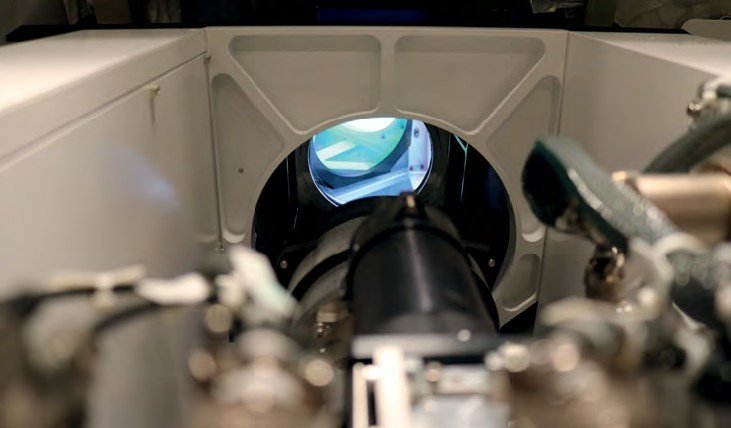 This system uses LiDAR (Light Detection And Ranging), which uses pulsed laser light to measure distance to a target. It looks out ten statute miles (16km) ahead of the aircraft, which JAXA says is the longest range on any CAT sensor yet developed, to find the location of any upcoming CAT that conventional weatherradars fail to identify. Importantly, Christensen added, “it shows not only the strength of the turbulence, but also a countdown of when it’s coming in and how soon it’ll hit.”

The system, Yu said, gives the crew about 70 seconds’ warning of the turbulence ahead, enabling the crew to turn on the seatbelt sign and warn passengers and crew to sit down and avoid any potential injury caused by the bumps.

Christensen said: “We spent a full day out in Kansas and found some weather that would give us some clear air turbulence. We spent a day just flying into this turbulence and watching the system predict it, counting down to when the aircraft would hit. It was quite amazing how accurate the system was in predicting the turbulence.”

He added JAXA is now working on how to integrate such a CAT detection system into current flight displays. The system installed in the ecoDemonstrator 777F weighed 184lb (83.7kg), which JAXA said is equivalent to one passenger with one bag, so its weight penalty would be small. JAXA believes the system could potentially reduce injuries caused by turbulence by 60%. 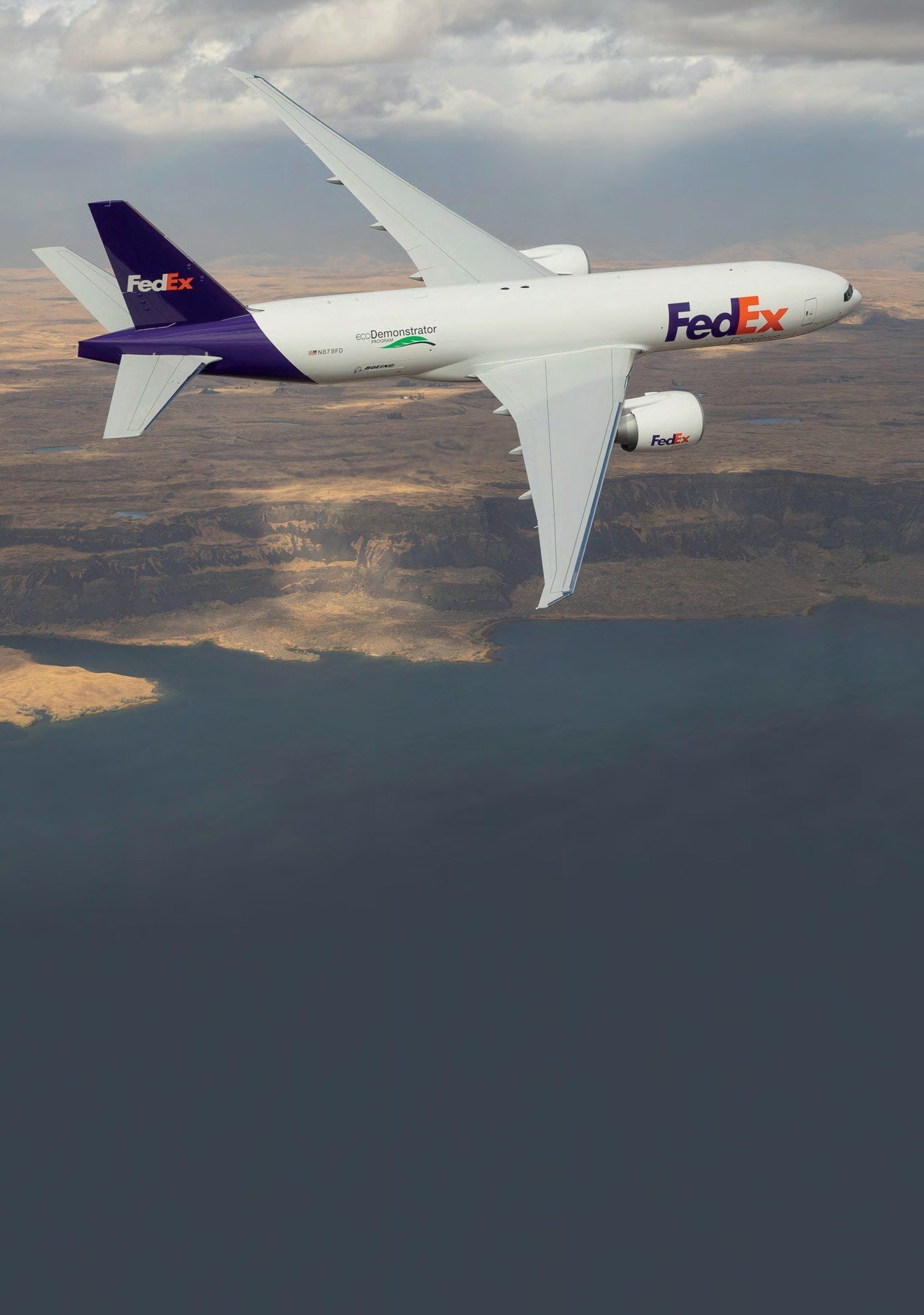 The Boeing 777F returned to regular service with FedEx after the ecoDemonstrator trials concluded.
Boeing

The ecoDemonstrator 777F also tested SOCAS, a Surface Operations and Collision Avoidance System, designed to help a flight crew identify if there any obstacles – other aircraft, buildings, ground operations vehicles, people – in the way of the aircraft while it is taxiing on the ground in poor weather.

Data from a radar sensor and pictures from a video camera are combined to generate a map of the environment surrounding the aircraft, with all the surrounding objects, cars, buildings and aircraft modelled. This map enables the SOCAS to ‘sense’ what is around the aircraft and identify any potential collisions. The system then notifies the crew that an object is in the way.

For the ecoDemonstrator the 777F went to Glasgow Airport in Montana, where a fire truck and a large inflatable and moveable pylon were used to test the ability of the SOCAS to detect the obstacles and provide warnings about them.

With the ecoDemonstrator Programme having tested so many technologies in just a few years, it is perhaps unsurprising to learn it is set to continue.

Yu confirmed: “Our leaders want us to accelerate and increase the frequency of our test platforms. We are planning testing this year on a widebody [aircraft]. We are also looking at 2020 and 2021 platforms.

“We are looking at a whole list of technologies that have been proposed and we’re in the process of pairing-off[technologies] with the right platform and right timing and deciding what platforms we need.”

Yu added the ecoDemonstrator aircraft “are also positioned to help us de-risk any new technologies”, and Christensen said: “We look ahead at our product strategy and the technologies that are critical for those products.”

As well as improving current-production aircraft, might these technologies also make their way into new designs? Boeing has for some time now been studying a New Midmarket Airplane (NMA) to cater for the middle of the market for 200-250 seats which, if launched, would be the company’s first new clean-sheet airliner since the 787 launched 15 years ago.

Whatever is decided about the NMA and its timing, the contribution the ecoDemonstrator made to the 737 MAX’s development shows it is entirely plausible the programme might in some way contribute to such a project, or indeed any other product developments planned by Boeing.

Christensen concluded: “It’s just really exciting to see how we’re taking these demonstrators, accelerating these technologies and getting them on aircraft.” AI