The true effect of COVID-19 on the aviation industry

Exclusive research from Key.Aero has revealed that the grounding of commercial aircraft due to the Coronavirus pandemic has resulted in approximately 84 million fewer standard air miles being flown from the UK’s airports each month.

We analysed the data relating to every domestic and international route that’s covered by the UK’s 43 commercial airports, and the numbers provide a sobering overview of the current crisis facing the sector.

83.7 million miles a month are not being flown 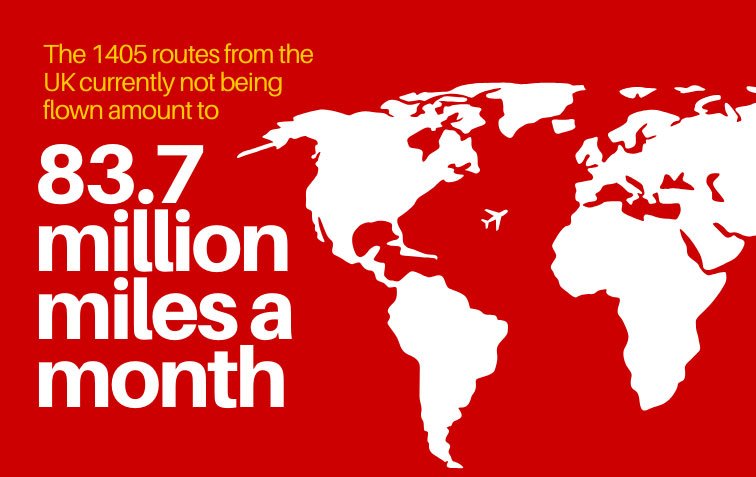 Incredibly, there are 1,405 weekly scheduled routes from all of the UK’s airports that are out of action at the moment, which would normally total 19,290,838 standard miles over an average seven days, or 83,722,237 miles a month (we multiplied the weekly number by 4.34, the average number of weeks in a month, to get an approximate figure). 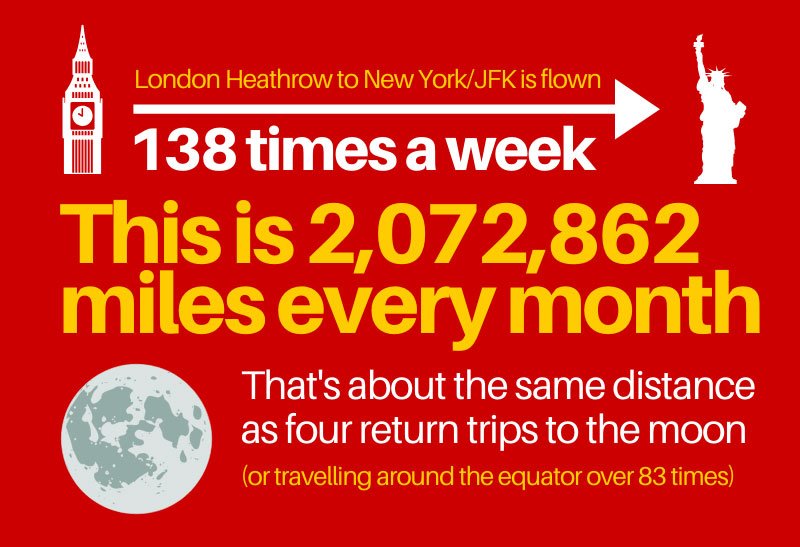 The busiest international route out of any UK airport is London/Heathrow to New York/JFK: between them, British Airways, Virgin Atlantic, American Airlines and Delta Air Lines link the two megahubs on average 138 times every week. That means that this route alone accounts for around 477,618 air miles a week – or 2,072,862 miles a month. That’s the equivalent distance of completing the 24,901-mile journey around the equator over 83 times, or about four return trips to the moon.

Some of Heathrow’s other international services can’t touch JFK for frequency, but certainly add to the overall mileage. Heathrow to LAX is usually flown 66 times a week for a total of 361,218 miles (1,567,686 a month), while jets fly to Singapore 49 times a week, giving a total of 333,151 miles (1,445,875 a month). Meanwhile, some of the short-haul connections can’t get near these for mileage, but their weekly frequency is incredible: Heathrow to Dublin is flown a staggering 136 times, Heathrow to Amsterdam 125 times and Gatwick to Barcelona/El Prat 99 times. 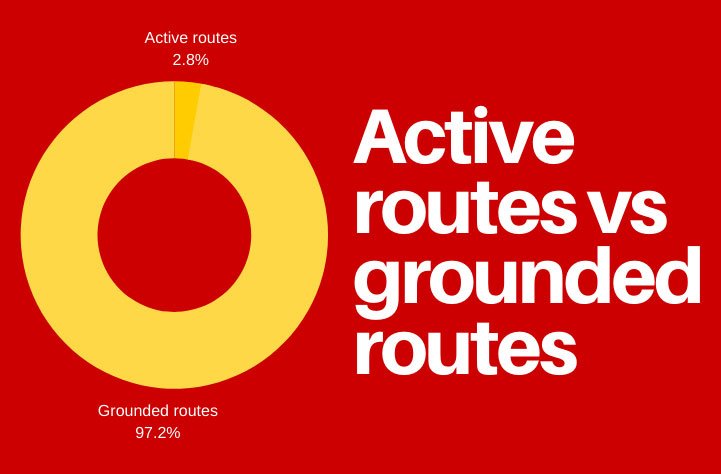 259 Olympic-sized swimming pools worth of fuel 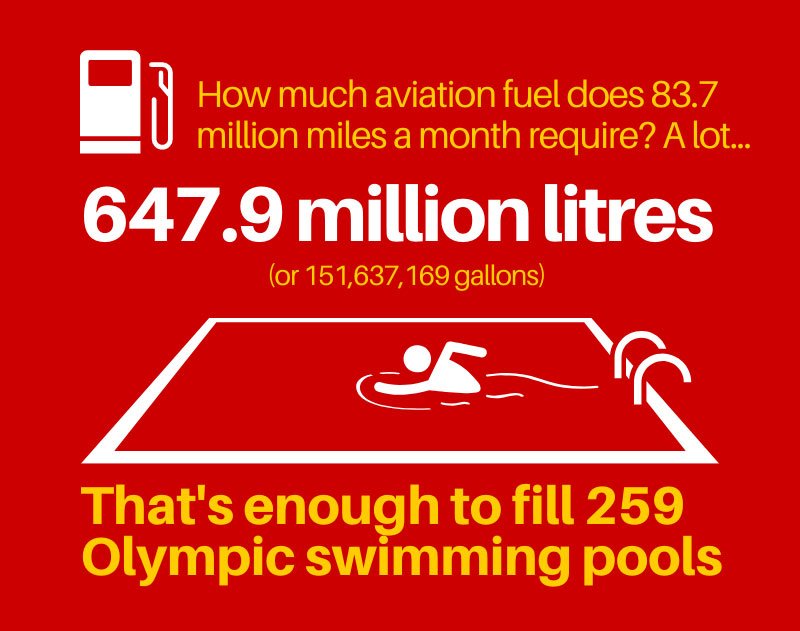 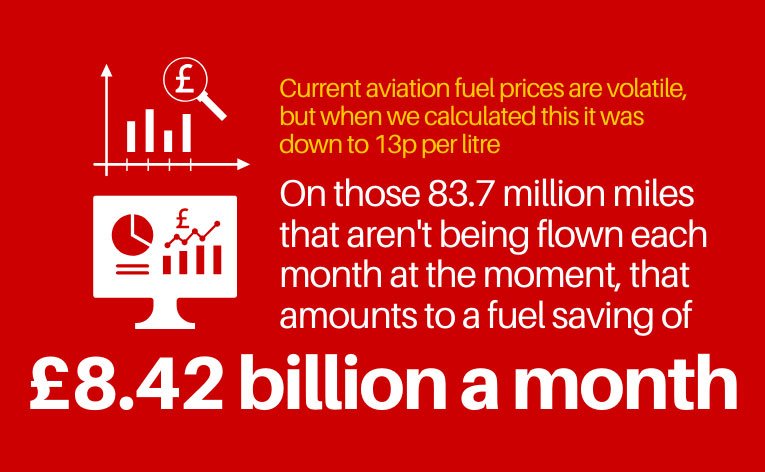 As you’d expect, this amount of fuel is worth a staggering amount. Even at current low prices, with a litre costing around 13p, that’s still just over £8.42 billion a month. It’s an eye-watering amount – all the more so considering that fuel prices have dropped 38 per cent in the past month or so, and remain extremely volatile.

The paralysing effect of Coronavirus on aviation

Gordon Smith, group editor of commercial aviation at Key Publishing, commented: “While the full impact of COVID-19 on the commercial aviation sector can often feel difficult to comprehend, this exclusive Key.Aero research provides a stark indication of its paralysing effect. As an island nation and global air hub, the UK is feeling the full wrath of the global shutdown. With the all-important summer season likely to be a write-off, low fuel prices will offer little relief to airlines which will be feeling the pain for many months and years to come.” 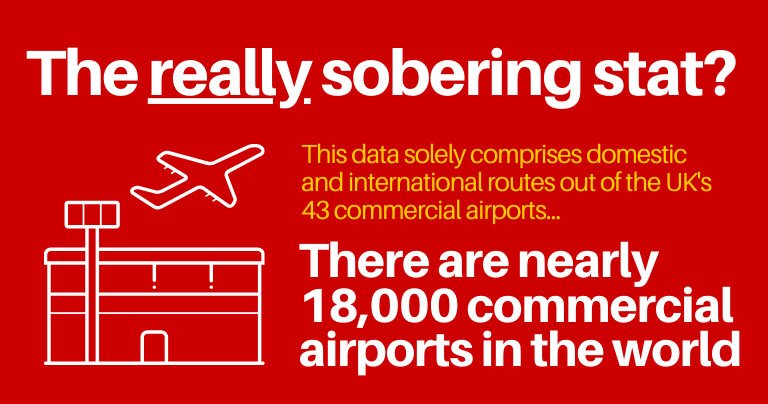 To add further perspective, these figures are based purely from the UK’s 43 airports: there are nearly 18,000 commercial airports in the world, with over 500 of them in the US alone.

More about Coronavirus and the aviation industry

If you’d like to know more about the many effects of the pandemic on the aviation industry across the world, visit our dedicated Coronavirus page. You’ll find plenty of news articles, in-depth analyses and reports of the consequences of COVID19 on the aviation sector.

COVID-19 and its effect on aviation - Infographic