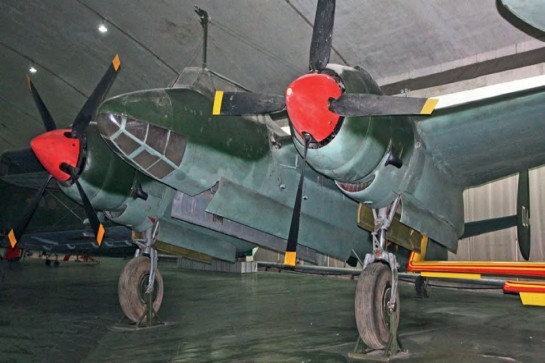 Tupolev Tu-2S serial 0462 in the PLAAF Museum at Datangshan. Eight examples originating, it is thought, from Datangshan are now in the UK.

In one of the warbird coups of the decade, a cache of eight Tupolev Tu-2 highspeed medium bombers has been acquired from China by a Midlands-based aviation engineering company, with the intention of putting one of the 1940s twin-engine Soviet machines back into flying condition. The aircraft are said to have come from the People’s Liberation Army Air Force Museum storage yard at Datangshan, Beijing. Although a small number of Tu-2s were exported to the USA during the late 1980s and early 1990s for restoration, none of them have yet been rebuilt to flying condition.

Designed by Andrei Tupolev while he was detained by the People’s Commissariat for Internal Affairs (NKVD) in Bolshevo prison near Moscow, the prototype, designated as the ANT-58, made its maiden flight on 29 January 1941. During testing, the four-crewman Tu-2 received more favourable reports than the Petlyakov Pe-2 light bomber, having more powerful armament — two forward-firing 20mm cannon, three 12.7mm machine guns, and a maximum bomb load of 8,818lb — and greater range and speed, being 62mph faster than the Pe-2. Tupolev was released from prison in July 1941 in order to “conduct important defence work.”

Fifteen Tu-2s were combatready in time for the start of the Red Army’s counter-offensive at Stalingrad, Operation ‘Uranus’, on 19 November 1942, but during the previous month Stalin had issued an order to stop production of the bomber in favour of the desperately needed Yak-9 fighter and Il-2 Shturmovik ground attack machine. The 80th and last Tu-2 of the original batch was assembled in January 1943, but after favourable reports of service tests reached the Central Committee Secretariat and Stalin, the hold on production was reversed. The latest variant, the Tu-2S, didn’t enter service until mid-1944, but was put to notably heavy use during Operation ‘Bagration’ in Soviet Byelorussia and the assault on Berlin the following year. The Tu-2s also saw service in the last campaign of the war, the Soviet invasion of Manchuria.

After the Soviet withdrawal from Manchuria in 1949, the PLAAF inherited more than 60 Tu-2s, which were used against Chiang Kai-shek’s Nationalists. During the Korean War at least four Chinese Tu-2s were shot down in air-to-air combat.

The ‘Bat’ (the NATO reporting name) was retired by the Soviets in 1955, the last having been built just four years earlier. The final Chinese examples soldiered on in second-line duties until 1982. A total of 2,527 were built, the type also serving post-war with the Polish, Hungarian, Romanian, Bulgarian and North Korean air arms.