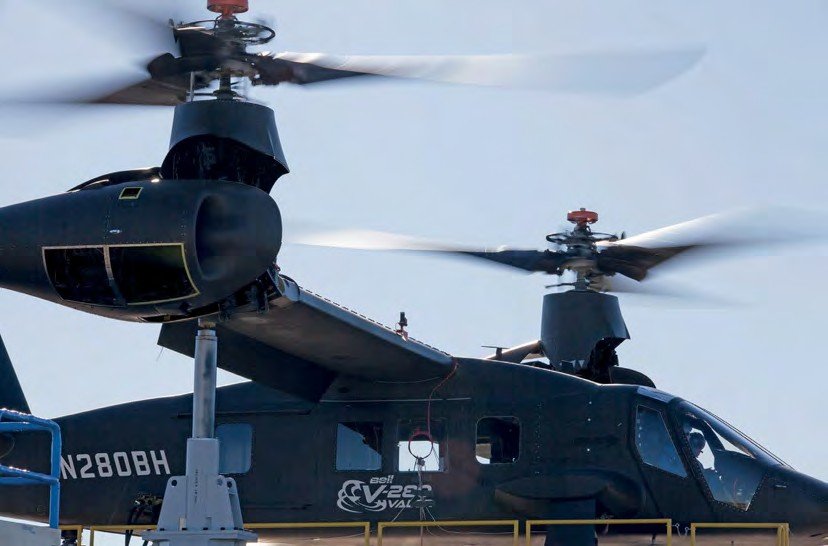 V-280 N280BH restrained by dampered-jacks on the run stand at the Amarillo test facility.
Bell Helicopter

AFTER 90 minutes of ground running, Bell’s V-280 N280BH (c/n 60105) lifted off the large pad used by Bell Helicopter at its Amarillo, Texas facility. For any layman watching on, the two-minute hover would not have amounted to much. For a team, comprising 11 companies led by Bell Helicopter known as Team Valor, it was the culmination of four years of development and assembly work, and the type’s maiden flight. The date: December 18, 2017.

Bell has designed and built the V-280 as a technology demonstrator aircraft, one of two teams selected by the US Army to build an aircraft for the Joint Multi- Role Technology Demonstrator (JMR-TD) programme. The second team is a joint venture between Sikorsky and Boeing with its SB>1 Defiant demonstrator. Why the chevron symbol was chosen for its designation is unclear. The SB>1 Defiant is a compound-helicopter with two sets of counter-rotating rotors articulated in a way that generates extra lift and the V-280 is Bell’s latest generation tiltrotor; an evolution of the V-22 Osprey.

The entire objective of the JMR TD is to use, prove and demonstrate technologies applicable to, and suitable for the US Department of Defense Future Vertical Lift (FVL) programme led by the US Army and the US Marine Corps. The Department of Defense wants FVL candidate aircraft to be affordable (cheaper), have the ability to fly further and fly faster, have all weather and networked capabilities, and to be survivable.

Perhaps the most remarkable aspect of the FVL programme is its scope: a variety of new types will replace about 6,500 aircraft currently in service with the US Army, US Marine Corps, US Navy and the US Air Force. That said, the two technology demonstrators are not in competition for a onetype- fits-all situation. The FVL programme has five capability sets.

The V-280 is a clean sheet design, the final design review of which was completed by the Bell-led team in 2015 paving the way for assembly to start at the Amarillo plant. Last year the assembly was completed, and checks and ground testing were started. Bell received a Federal Aviation Administration (FAA) special airworthiness certificate in the experimental category on July 17.

Such a certificate allows operation of an aircraft that does not have a type certificate.

The special airworthiness certificate allowed Bell Helicopter to commence an iterative work-up of restrained and unrestrained ground runs and testing.

On October 4, the V-280 aircraft commenced its restrained ground run test operations, the first of aseries of functional tests running all aircraft systems and flight controls in preparation for its first flight.

Three days later, the aircraft successfully achieved ground run testing at 100% rotor RPM, and on October 27 the aircraft achieved controlled conversion from 95 to 75-degree pylon and back – allowing for full hover and low speed agility manoeuvring.

According to Bell Helicopter’s Director of Global Business Development Advanced Tiltrotor Systems, Carl Coff man: “Once the aircraft lifted off the ground for the first time the test pilots conducted a hover and landed the aircraft safely after just two minutes”. 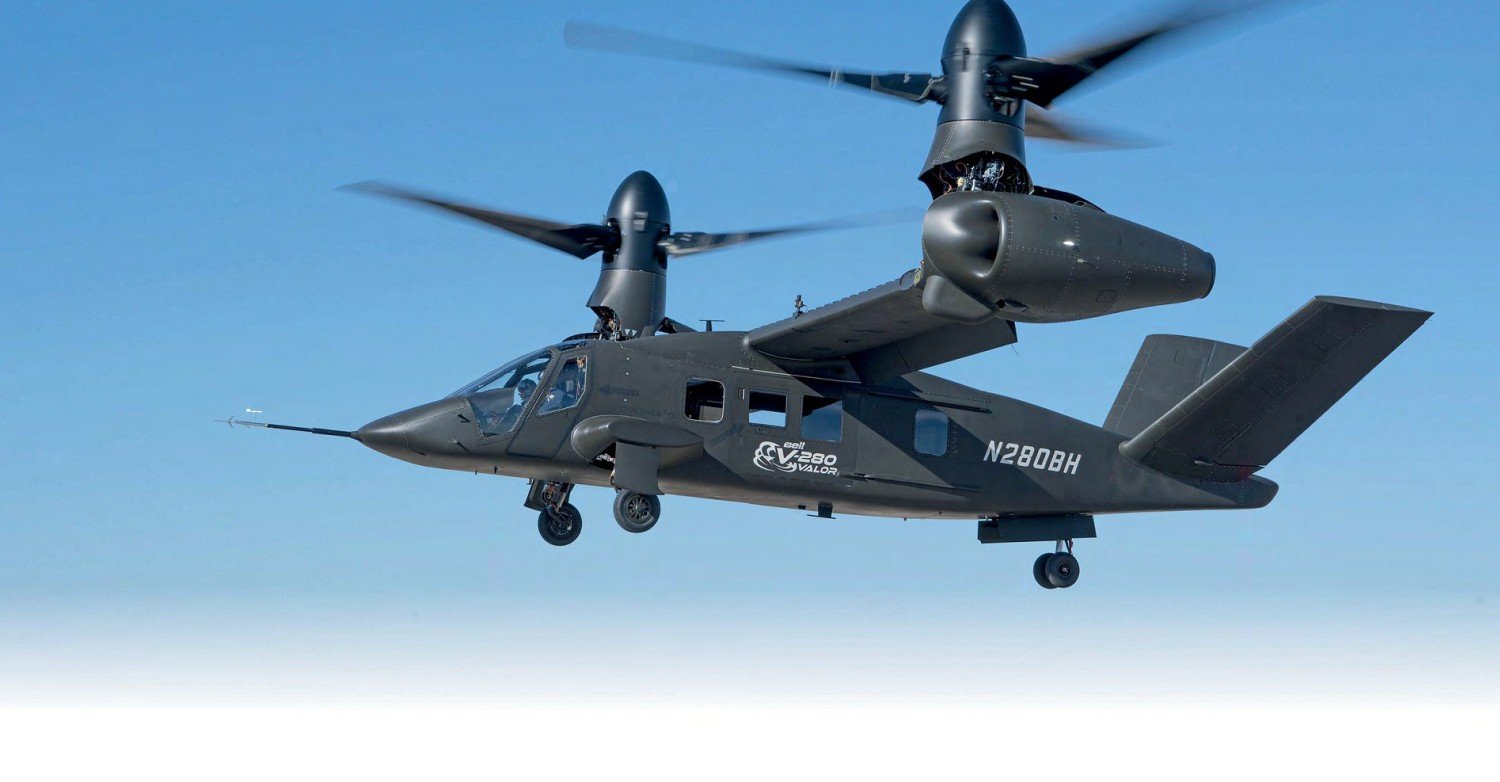 V-280 N280BH in the hover at Amarillo on December 18, 2017. Bell has designed the V-280 with its T64 engines fixed in the horizontal plane, and a rotating (tilting) nacelle housing a fancy new drive system for the three-blade proprotors. On the V-22 Osprey, the engines are housed in the nacelles and rotate together.
Bell Helicopter

The maiden flight was all in hover mode, and involved minor pilot inputs to check the flight controls and the responses were functioning to expectation. Coff man said: “The aircraft performed very well during the two-minute flight, though the crew did experience an test instrumentation issue that showed a data feed was not in effect so the crew sat the aircraft back down.”

Technology used on the V-280 Valor enhances manufacturing, assembly, sustainability, and reduces the total cost of ownership. Advanced tiltrotor speed and range, more than twice the speed and range of current helicopter platforms, provides commanders access not currently available, while providing superior agility at the objective.

At the time of AIR International’s interview with Bell Helicopter on January 11, the test team had not re-flown the aircraft since its maiden flight. This was because of the Christmas and New Year shutdown and because of adverse weather in the Amarillo area during early January 2018.

At that time, the V-280 team had achieved 35 hours of restrained and unrestrained ground runs, and two minutes of flight time. Coff man said the aircraft was ready to recommence the flight test programme later in January. During 2018, the Bell test team will continue to fly the aircraft through its test cards and expand the flight envelope, by conducting more hover and ground taxi work before the conversion from hover to aeroplane mode.

The Future Vertical Lift programme is planned to begin delivering aircraft to the US Army sometime in the next decade. After the December 18 maiden flight, Bell Helicopter president and CEO Mitch Snyder said: “The V-280 intends to completely transform what is possible for the military when it comes to battle planning and forward operation.”