The US Navy and US Marine Corps each closed down a longserving aviation squadron recently, in line with executing the reduction of a Carrier Air Wing and to retire the EA-6B Prowler electronic attack aircraft.

Strike Fighter Squadron 15 (VFA-15) ‘Valions’ was deactivated at Naval Air Station Oceana, Virginia, on May 31, 2017, after almost 49 years of service. The squadron was one of a dwindling number flying the legacy F/A-18C Hornet strike fighter. It was cut as part of the Navy’s move to reduce the number of Carrier Air Wings to nine. 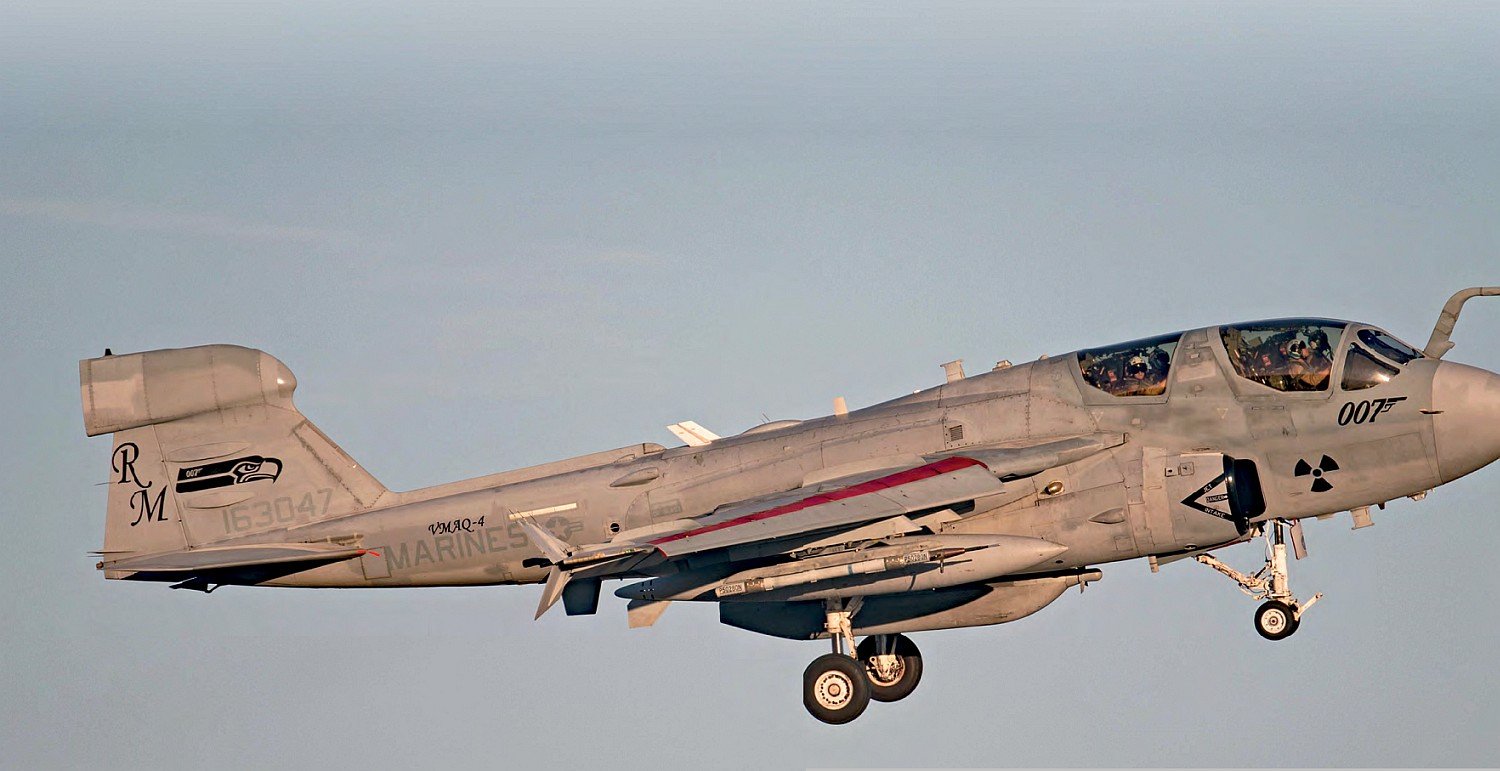 The squadron was originally activated on May 21, 1981, as a reserve squadron, but in October 1992 was activated as an active-duty component squadron. It was the second of the Corps’ four Prowler squadrons to be closed down.

The remaining two Prowler squadrons will be retired by 2019 — one each year — as the Corps retires the last EA-6Bs. The US Marine Corps is shifting to a distributed electronic warfare architecture that will include the F-35B Lightning II.

The Navy has retired its fleet of TC-12B Huron training aircraft, and now is relying on the T-44C for multi-engine training.

VT-35 is now using the T-44C for multi-engine training along with its sister squadron, VT-31. The T-44C features an upgraded cockpit to make training more realistic for operating modern aircraft.

The TC-12B is a twin-engine, pressurised version of the Beechcraft Super King Air 200. The Navy had reduced its operational support aircraft fleet and modified 25 UC-12Bs to the TC-12B configuration to support student pilot training. As the Navy completed modernisation of its T-44A fleet to the T-45C configuration, the need for the TC-12B declined, resulting in its phase-out.

The MQ-4C is a long-awaited addition to the Navy’s maritime patrol community that is also modernising with the Boeing- built P-8A Poseidon maritime surveillance aircraft to replace the P-3C Orion. The P-8A and MQ-4C will be the basis for a family of systems for patrolling the oceans.

The MQ-4C is designed to conduct maritime surveillance for the fleet. Its endurance provides a long-dwell capability to monitor its assigned track. Its multifunction radar, electro-optical cameras, electronic surveillance measures sensor and automatic information system will allow it to search, detect and track shipping and other targets, and relay the data back to a ground- or ship-based mission control station or to another maritime patrol aircraft.

The Navy plans to procure 68 MQ-4Cs in addition to two prototypes used in the System Development and Demonstration program. Two operational squadrons together will field five orbits, for a total requirement of 20 Tritons. The remaining 38 aircraft would sustain the programme for attrition, training and depot-level maintenance. Although fewer than 30 MQ-4Cs will be in service at any one time when the system reaches full operational capability, the production run will be able to sustain the orbits as the service life of the aircraft expires over time.

To mark the Centennial of Naval Aviation Training Squadron 35 (VT-35) painted TC-12B BuNo 161197 in a commemorative paint scheme to reflect US Navy aircraft that participated in the Battle of Coral Sea. The last TC-12B mission was flown by VT-35 on May 16, 2017.
Richard Stewart/US Navy

The Marine Corps plans to move a transport squadron to Fort Worth, Texas, where its crews will fly Navy C-40A Clipper transport aircraft until the squadron receives its own C-40As.

Marine Transport Squadron 1 (VMR-1) based at Marine Corps Air Station Cherry Point, North Carolina, operated two C-9B Skytrain II transports for decades to provide rapid-response airlift for Marine Corps units. Many of the Navy’s Reserve fleet logistics support (VR) squadrons also operated the C-9B and the similar DC-9 until they completed transition to the C-40A. VMR-1 was the last squadron to operate the C-9B, but its transition to the C-40A had awaited the Navy budget to fund the last two of 17 C-40s to replace the C-9Bs. The FY2017 budget funds the 16th and 17th C-40As.

The 2017 Marine Corps Aviation Plan has slated VMR-1 to move to Naval Air Station- Joint Reserve Base Fort Worth and convert from an active-duty squadron to a reserve squadron by October 2017.

Commander, Patrol Reconnaissance Wing 2 (CPRW-2), headquartered at Marine Corps Air Station Kaneohe Bay, Hawaii, was de-activated on May 31, 2017 and its remaining units have transferred to Commander, Patrol Wing 10 (CPRW- 10), headquartered at Naval Air Station Whidbey Island, Washington. One of the units assigned to CPRW-2, Special Projects Patrol Squadron 2 (VPU-2), will remain based at Kaneohe Bay until it is deactivated by 2020.