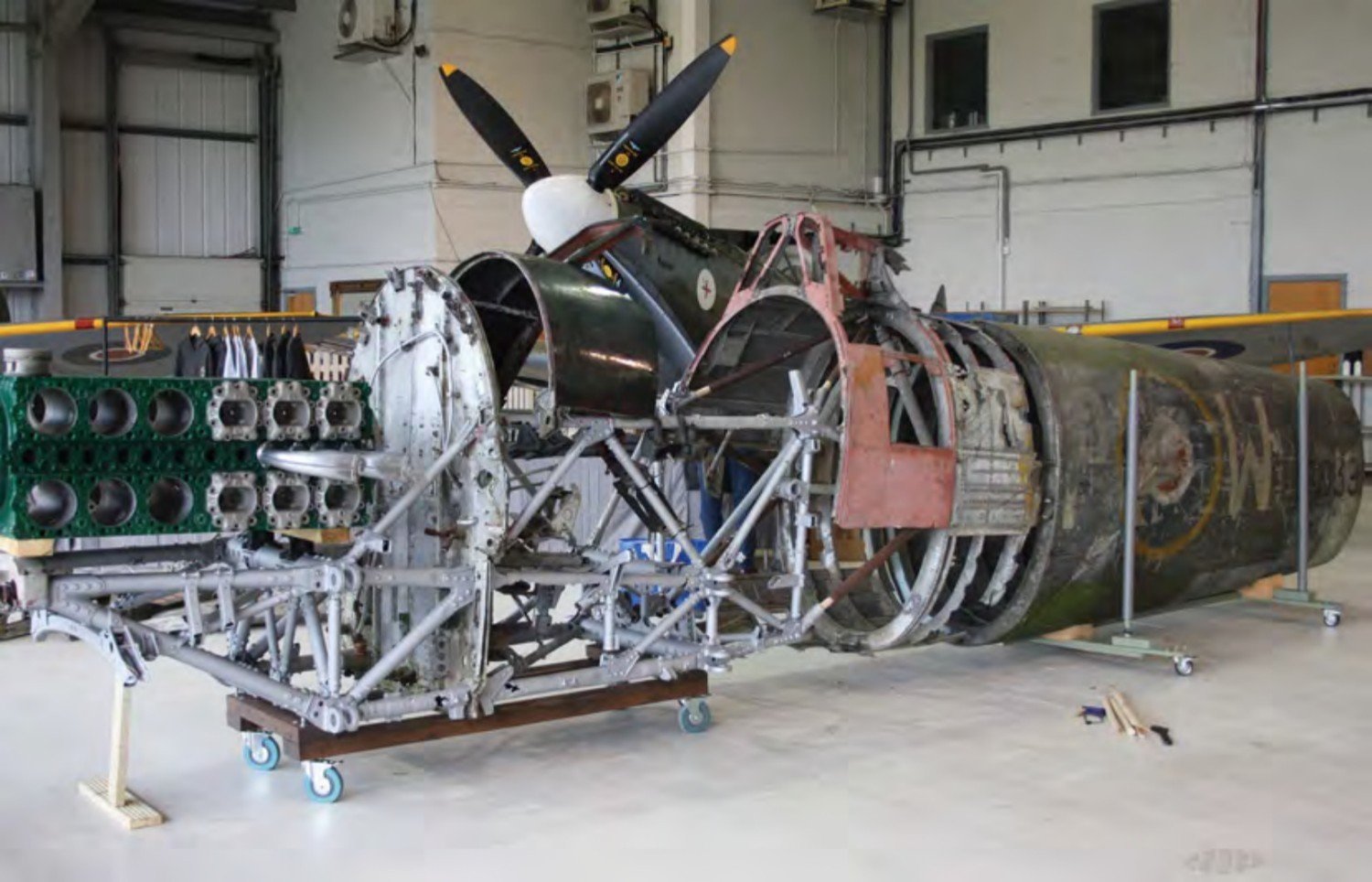 The Typhoon project laid out in the Boultbeehangar at Goodwoodon29October, with the rear fuselageof RB396 exhibiting its original paint.
TPG

Although it is well-known that the RAF Museum’s Hawker Typhoon IbMN235 is the only complete example of this legendary fighter-bomber to have survived, over the past 25 years or so it has become increasingly clear that the multitude of components and relics held by various owners in the UK could, if they were ever brought together, form the basis of a second example. On 29 October, at the Boultbee Flight Academy at Goodwood aerodrome, Sussex, many of those salvaged parts — now under the care of the Typhoon Preservation Group (TPG) — were laid out as a kit of parts for the first time at the public launch of the TPG’s project to restore Typhoon Ib RB396 to flying condition. It is hoped that the rebuild will begin during 2017, with a first flight scheduled in time for RB396 to fly fromGoodwood to Normandy for the 80th anniversary of the D-Day landings on 6 June 2024.

The three founding trustees of the TPG are Sam Worthington-Leese, a 30-yearold flying instructor and display pilot at Goodwood Aero Club, Jonathan Edwards, a professional draughtsman and CAD engineer, and Dave Robinson, a technology project manager who originally set up the project way back in 1999.

It was during that last pre-millennial year that Dave moved to a house in Lichfield only to discover that it was built on the site of a former maintenance unit, No 51 MU, through which almost every RAF Hawker Typhoon passed on its way to a squadron. Dave began researching the type, and the following year acquired a complete firewall with the front section of cockpit still attached. Over the following decade, various parts including cockpit fittings, brackets, elevators, instruments and undercarriage components were sourced, but with an absence of technical knowledge about the Typhoon there would be little chance of a satisfactory rebuild. Some surviving documentation, manuals, drawings and technical information was gathered, including RAF parts catalogues, details of manufacturing techniques and a copy of the Hawker draughtsman’s manual. It was known that some original Hawker drawings existed in the UK, but permission to view or use themwould never be given.

Then, in 2010, out-of-theblue contact was made by an individual who claimed to have thousands of drawings on aperture cards that had been rescued from a skip at the Hawker factory in Kingstonupon- Thames. During 2012, a total of 11,500 drawings, of which 2,500 were of the Typhoon, were acquired. Many of these detailed the main spars, cockpit and other areas of the Typhoon airframe. Months were then spent scanning, cataloguing, and getting to understand the nuances of the Hawker technical drawings which, when combined with the other documentation, filled in many of the gaps.

Fortunately, just as the task of scanning was reaching its conclusion and a searchable database had been created, the largest known section of a combat veteran Typhoon became available.

On 1 April 1945, Flt Lt Christopher House of No 174 Squadron, part of the Second Tactical Air Force’s No 83 Group, was flying Typhoon Ib RB396 on an offensive sweep from Goch, close to the Dutch-German border. After releasing his salvo of eight rockets, House’s aircraft sustained flak damage, and a forced landing had to be made near the city of Denekamp in eastern Holland. After the war a local chemical company acquired the rear fuselage of RB396, intending to cut one side out and employ it as a chemical wash. Happily, that plan never came to fruition, and the relic remained in a corner of the chemical works until being saved by a group of historians and transported to a museum at Twenthe.

Following the closure of that collection, the fuselage section went to the Aerial Warfare Museum at Fort Veldhuis, 15 miles north-west of Amsterdam. When staff there became aware of the TPG’s efforts, the fuselage was made available to the project at a price lower than that offered by other interested parties. Almost 70 years after it left Britain, the fuselage section arrived back in the UK during early 2013.

SamWorthington-Leese — whose grandfather, Plt Off R. G. Worthington, flew Typhoons from RAF Westhampnett (now Goodwood aerodrome) — says, “It is only the advent of social media that has opened up possibilities like this. It has enabled us all to establish contact, and now that people can see what we are doing, they are more likely to offer assistance.”

During May 2015 the project set up a Facebook and then a Twitter page, since when numerous extra parts have been discovered to exist. In May 2016 it was successfully registered as a charity in the UK.

The TPG plans to create a Typhoon Heritage Centre and Memorial to help educate the public about the importance of the type, its pilots and groundcrews, and the people who built it.

The project is expected to cost between £4-6 million and will be funded by public support, donations and sponsorship. Project membership, merchandise and donation options are all now available online at hawkertyphoon.com.