United Kingdom Special Forces (UKSF) have been heavily engaged in Operation Shader, the UK’s anti-ISIS effort in Iraq and Syria. They have performed covert and highly classified tasks, mostly reconnaissance missions or acting as forward air controllers (FAC), directing UK and US airstrikes. Additionally, largely unnoticed by the British public, RAF Chinook helicopters and Hercules transport aircraft have provided airlift for UKSF during these missions.

UKSF operate with the most modern variant of the Chinook, the HC6, which is roughly analogous to the US Army’s CH-47F; the RAF accepted its first one in December 2013 and the last of fourteen in December 2015. The type was involved in several missions covertly supporting UKSF in Operation Shader. Airlift support and resupply missions were often performed by the HC6s on deployment in Iraq and Jordan and they were used to insert and extract Special Forces close to the Syrian border. They stood alert for CSAR (Combat Search and Rescue) missions until the US Air Force deployed its CSAR helicopters to northern Iraq and southern Turkey. The US Air Force deployed four CV- 22Bs to Erbil International Airport on February 5, 2015 and then two HC-130Js Combat King IIs and three HH-60G Pave Hawks on October 1, 2015.

In action over Sinjar

On August 12, 2014, the UK’s House of Commons made the decision to send a pair of Chinooks to RAF Akrotiri, Cyprus to be used by UKSF in support of relief operations in the Sinjar Mountains, Iraq. Subsequently, two Chinook HC6s landed at RAF Akrotiri on the night August 13, 2014. UKSF troops had already deployed to Erbil in Iraqi Kurdistan to take part in such a mission. At the same time, more UKSF troops deployed to RAF Akrotiri aboard a Hercules C4. The team was to prepare for a hostage rescue mission: saving British and other foreign nationals held as hostages by ISIS, including Alan Henning, a volunteer humanitarian aid worker who had been kidnapped by ISIS in the Syrian city of Al-Dana in December 2013.

Immediately on their arrival the UKSF troops began rehearsing their mission, which was scheduled for the second week of September. They were moved to Erbil, Iraq by a Hercules to await the green light for the rescue attempt. Unfortunately, the whereabouts of the hostages was not forthcoming before Henning was beheaded by the notorious Mohammed Emwazi (known as Jihadi John) on October 3, 2015. In addition to Britain’s Chinook HC6s it is known that the UKSF troops used US Army MH-47Gs and US Marine Corps MV-22Bs from Erbil between 2015 and 2018. Four more RAF Chinooks deployed to RAF Akrotiri by January 24, 2015. From January 2015, UKSF troops remained deployed to Iraqi Kurdistan carrying out joint operations with US Special Forces and providing training for Kurdish Peshmerga fighters. UK and US Special Forces fought alongside the Kurdish Peshmerga during the battle of Kubani. By March 15, 2015, the Kurdish Peshmerga assisted by UK and US Special Forces had managed to liberate all of the villages around Kubani, which had been captured by ISIS in September 2014. The Chinook HC6s were used not only for airlift and logistics support but were occasionally used for medevac.

By December 13, 2015, two of the Chinooks deployed to Iraq had returned to the UK leaving four Chinooks at RAF Akrotiri together with two Army Air Corps (AAC) Apache AH1 attack helicopters. In May 2016, one of the Chinooks returned home. Between August 2014 and December 2016, RAF Chinooks regularly deployed to Jordan to support covert UKSF operations there. Advisors and instructors had been training moderate Syrian rebels there between 2012 and 2014. In August 2012, a group of commandos secretly infiltrated Syrian territory and delivered satellite phones and light weapons to a group of the Free Syrian Army. In 2014, Jordan-based commandos began carrying out hit and run operations against ISIS deep inside Syria. Many of their targets were former Free Syrian Army jihadists who had joined ISIS. 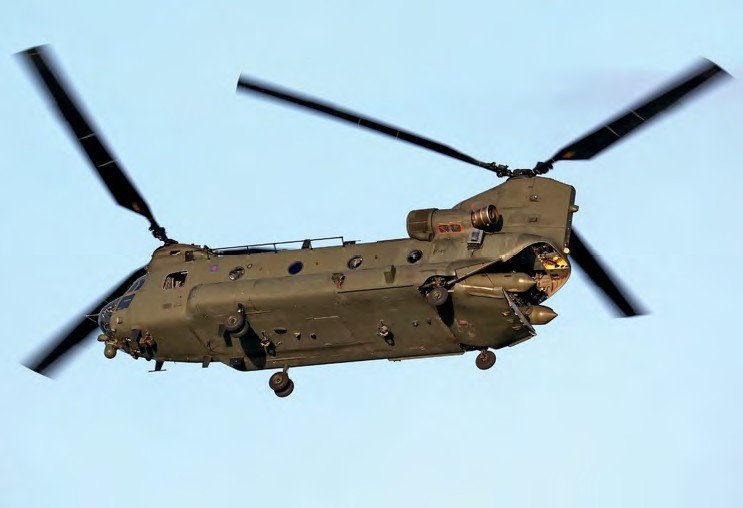 Chinook HC6s during an insertion of special forces

Chinooks were deployed to King Abdullah II Air Base, Jordan where UKSF troops had established a base in 2015. From Jordan the Chinooks flew medevac and airlift support tasks during which they were always escorted by two AAC Apache AH1s.

The introduction of US Army helicopters and US Marine Corps MV-22Bs to the Iraq-Syria theatre of operations allowed for the Chinook HC6s to be withdrawn from those countries in late 2016. In May 2015, UKSF troops joined a group of US special forces in a mission to assassinate Abu Sayyaf, a senior ISIS commander, deep inside eastern Syria. The UKSF commandos flew to Deir ez-Zor aboard MV-22Bs to gather intelligence on the terrorist commander. The UKSF commandos secreted themselves near Deir ez-Zor, confirming Abu Sayyaf’s presence. Using the information, the US Air Force carried-out an airstrike against his compound killing 15 ISIS jihadists. Minutes later a group of 50 US Delta Force commandos raided the position. They killed Abu Sayyaf and captured his wife and freed their Yazidi slave girl.

Because of its ability to use short and rough runways deep inside enemy territory, the C-130 Hercules is the aerial transport of choice for many of the world’s special forces. The Royal Air Force’s last Hercules unit, 47 Squadron can pick from 12 Hercules C4s and four Hercules C5s. The squadron has flown the C-130 since it received its first C-130K on February 25, 1968. The unit’s battle honours include use by the SAS during the Falklands War, first Persian Gulf War, Balkans War, Sierra Leone Civil War, Afghanistan and Iraq War and many others. Before the beginning of Operation Shader, 47 Squadron supported covert UKSF operations in Syria by airlifting UKSF commandos from Akrotiri to King Abdullah II Air Base.

Following the genocide of Yazidi minorities in northern Iraq, tens of thousands of survivors fled from the ISIS murderers to the Sinjar Mountains. The UK parliament tasked the RAF with dropping humanitarian aid to the besieged Yazidis. Two of 47 Squadron’s Hercules C4s flying from RAF Akrotiri were assigned the mission.

In the final hours of August 9, 2014, the two C4s dropped the first part of the UK’s £8 million aid effort to 75,000 Yazidis trapped on the mountain: 1,200 reusable water containers and 240 solar lanterns for recharging mobile phones. At the same time, US Air Force fighter jets started bombing ISIS terrorists in the mountains. A second, similar airdrop planned for two days later was cancelled because of the risk of injury to civilians on the ground. Because of this, two of the four Chinooks at RAF Akrotiri were sent to Erbil International Airport where one picked up a group of ten UKSF commandos and took them to the region to coordinate the relief effort. With their assistance, the second airdrop was successfully performed by two Hercules on August 12. A total of 3,180 reusable water purification containers containing a total of 15,900 litres of clean water, and 816 solar lamps were delivered in that drop. The next day saw a third drop performed by the two Hercules. This time 2,640 reusable water purification containers filled with clean water (13,200 litres in total) and 528 shelter kits to provide shade in temperatures of over 40°C were airdropped for the Yazidis. Both Hercules were refuelled by a Voyager KC3 tanker during the mission. Two of the RAF’s eight Tornado GR4s based at Akrotiri flew with the Hercules C4s and used their Litening III pods to assist in the delivery of the aid material. August 14 saw the fourth and final drop: 2,400 reusable water purification containers filled with clean water (13,200 litres in total); and 480 shelter kits. A combination of UKSF forward air controllers and Litening podequipped Tornados assisted the airdrop. UKSF commandos also directed US Air Force airstrikes on ISIS Jihadists in the area.

Before the end of the aid airdrop missions, the two Hercules based at RAF Akrotiri were regularly used to carry men and materiel to Erbil International Airport. Together with the RAF’s C-17 Globemaster III transport aircraft, they carried 100 tonnes of UK-gifted weapons and equipment to Erbil for Kurdish Peshmerga units. UK military forces began training the Peshmerga forces after the British government agreed to send 12 (increased to 50 in November) members of the 2nd Battalion, the Yorkshire Regiment (2 YORKS) into Erbil on October 12, 2014. The first tranche of these troops travelled to Akrotiri on a Voyager KC2 and from Akrotiri to Erbil on a Hercules. The intensity of flight operations increased so that hardly a day went by in the theatre of operations when a flight to Erbil or beyond did not take place. On several occasions between 2016 and 2018, UKSF troops were transported deep inside Syria, to territory controlled by Syrian Defence Forces and the Autonomous Administration of North and East Syria. 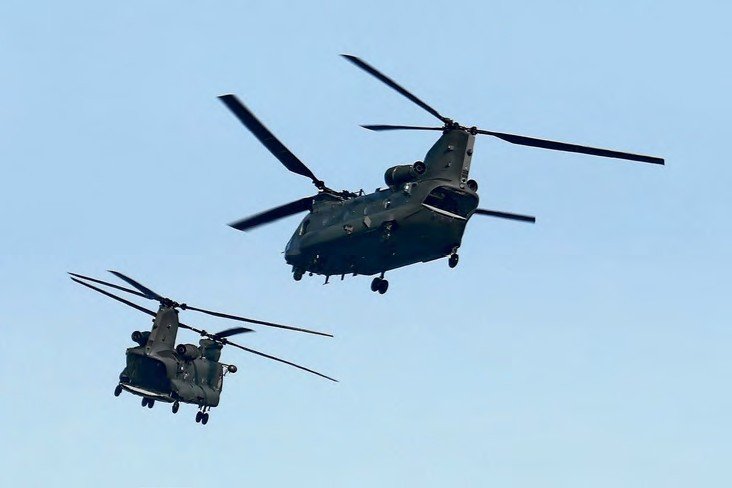 Nearly all of these flights took place at night using night vision goggles and the missions were not without hazard. Hercules C4 ZH873 made a hard landing on the old runway of Erbil International airport on August 25, 2017. It was extensively damaged and, after being cannibalised for spares, was abandoned. News about the incident was kept secret for security reasons but a Freedom of Information Request from AIR International revealed the truth some months later. Satellite images show the damaged aircraft totally stripped out of its valuable parts and stored at the airport. RAF Hercules have carried-out hundreds of cargo delivery missions and have transported hundreds of UKSF troops in Iraq and Syria with no further losses of aircraft.

Due to the importance and sensitivity of the UKSF role in Operation Shader, Hercules C4s and C5s take part in annual hot/warm environment training, exercising with UKSF troops in the Eastern Mediterranean. The UKSF troops train jointly with Israeli and Jordanian Special Forces in various locations prior to their deployments to Iraq and Syria. One of the most recent exercises involving UKSF troops, Chinooks and Hercules took place between March 6 and 28, 2019. Three Chinook HC6s, a Hercules C4 and a Hercules C5 were involved. The Chinooks forward deployed to an “undisclosed location in Southwest Asia” over the course of four days, arriving at their destination after four refuelling stops between March 1 to 4. Over the course of the three weeks, UKSF troops were trained and prepared for deployment and RAF aircrews trained for special forces operations in the Middle East and North Africa. Aircrew training began on March 6 when Chinook and Hercules pilots flew to Aqaba, Jordan to familiarise themselves with the area. They took UKSF troops and their equipment with them. On March 7 and 8, UKSF troops used a Hercules C4 to practise jumping into the sea. The Hercules climbed to 3,000ft AMSL and the team deployed using square-type RAM parachutes designed to provide soft, controlled landings. The boat was dropped first and then – almost instantaneously - five commandos jumped. Similar procedures, this time from Chinook HC6s, were practised in the evenings.

After the troops reached the desired level of readiness, four teams and their four boats, were taken to Jordan by Chinook HC6s where they practised night-time insertions in the Gulf of Aqaba on March 11. A Hercules C4 recovered the teams and their boats back to their base after their insertion near Aqaba. Chinooks left their base in the early evening of March 11, inserted boat teams and headed to Aqaba International Airport where they remained for several hours. After refuelling, the Chinooks returned to their base in the early hours of March 12. By March 12, four Hercules aircrews had trained to airdrop cargo from 8,000ft. Between March 14 and 18, the Chinooks and Hercules participated in similar UKSF boat and paratrooper training leading up to another exercise held on March 20 during which two Chinooks helped insert four boat teams in Aqaba again. As on the previous occasion, a Hercules returned all personnel to Akrotiri at the conclusion of the exercise in the early hours of March 21. AI

A Hercules C5 airdropping an inflatable raiding craft prior to a UKSF para drop. 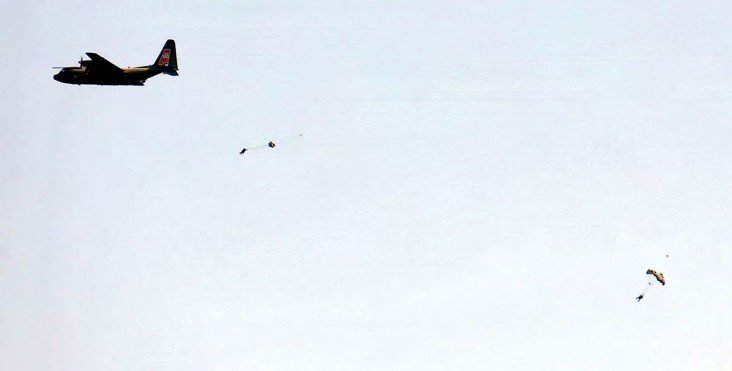