The annexation of the Crimea in March 2014 created many problems for the Ukraine Navy’s only aviation unit - 10 Mors’ka Aviatsiyna Brihada (MABr or Naval Aviation Brigade), operating a mix of former Soviet naval aircraft and helicopters such as Be-12s, Ka-27s and Mi-14s. Many now require overhaul, but plants specialized for the types are in the Crimea and their services are no longer available. Recently, the problem was partially solved. The Aviakon plant at Konotop was certified for the Mi-14 after overhauling anti-submarine warfare variant Mi-14PL, serial number 35 Yellow (c/n 78494), stored since 1993. Its service life has been extended by eight years or 1,000 flight hours and the aircraft returned to 10 MABr on March 16; a day after Aviakon was contracted to overhaul search and rescue variant Mi- 14PS side number 34 Yellow (c/n 75099). With the overhaul of Mi-14PL side number 36 (c/n 78495) Yellow due to be awarded in July 2017, it is expected that all four Ukrainian Mi-14s will be operational by 2018. The fourth example is Mi-14PL serial number 37 Yellow (c/n 78461). Vladimir Trendafilovski 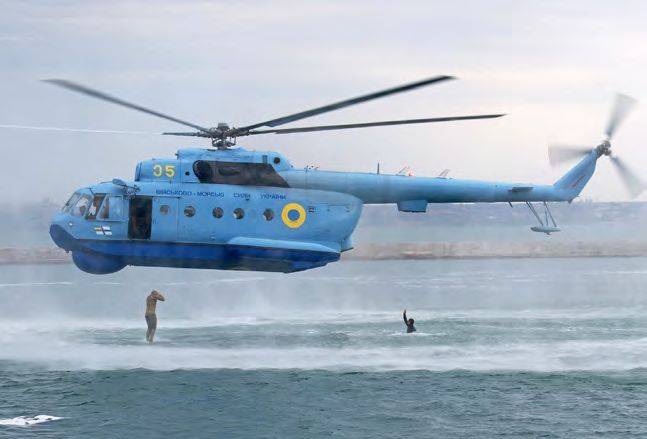 Recently overhauled Mi-14PL 35 Yellow of 10 MABr deploys divers during a search and rescue exercise which formed part of the Ukrainian Navy Day held in the port of Odesa on July 2, 2017.
Sergey Smolentsev