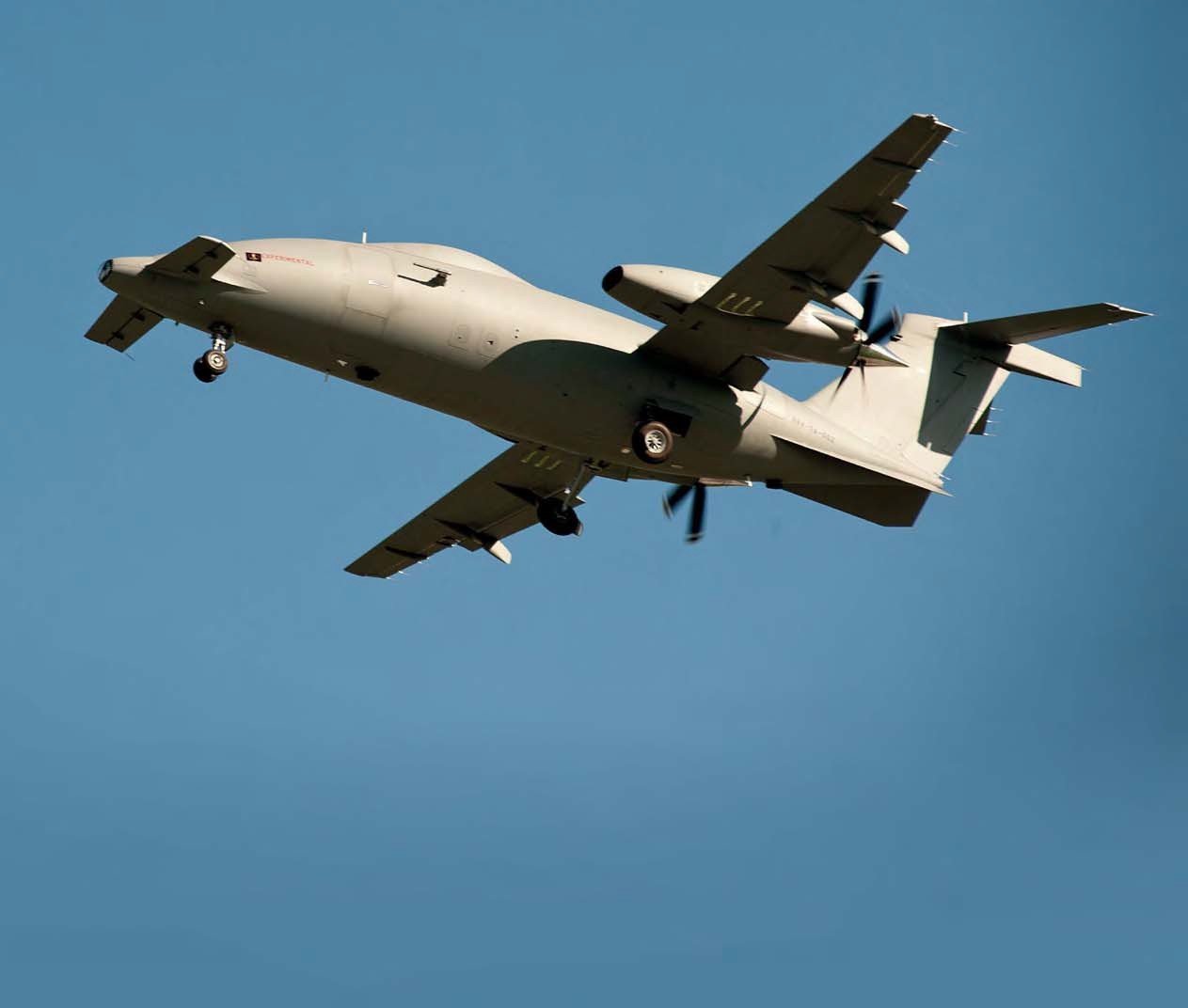 IN RECENT years, the economic wellbeing of Piaggio Aerospace, the historical company established in 1887 at Genoa, and now operating from the airport at Albenga, in the Riviera Ligure, has not been the best. The company, having recorded low sales for its P.180 executive turboprop, decided in 2016 to re-direct its efforts to the military sector, in a timely manner. United Arab Emirates investment company Mubadala had already started to purchase shares in the Italian company. In September 2015, Mubadala had 100% ownership and control of Piaggio.

The company took the decision to develop an unmanned aerial system (UAS) in the medium altitude long endurance (MALE) category based on the P.180. Dubbed the P.1HH Hammerhead, the unmanned P.180 was developed with the help of Leonardo, which provided the avionics and sensor systems.

Initially the Hammerhead programme included six P.1HH air vehicles for the Aeronautica Militare and eight for the United Arab Emirates Air Force; the contract signature was announced in March 2016. Flight test activity of the P.1HH prototype was carried out at Trapani Air Base, Sicily, but the prototype was lost during a test flight over the Mediterranean on May 31, 2016, caused by an unspecified accident. Using a second prototype, flight test activity continued, but at a time when Piaggio was facing considerable debt. Mubadala provided €100 million to clear the debt, recapitalize the company, create a new industrial plan, and thereby provide a more optimistic future for Piaggio.

Key to the new industrial plan was an agreement between the UAE and Italian governments to each order 20 new air vehicles developed under a new MALE UAS system dubbed the P.2HH, valued at €1.5 billion.

At the beginning of 2018, the then Italian Minister of Defence, Roberta Pinotti, sent a decree to Parliament for the acquisition of ten Hammerhead systems (each comprising two air vehicles and one ground control station), for a total cost of €776 million.

Parliament had to approve the proposal in the near term, but Pinotti’s decree was stopped by the Italian election held in March 2018. The decree remained on hold awaiting the formation of a new coalition government.

In the meantime, the Emirati government took a decision to not invest more money into Piaggio, and cancelled its order for eight P.1HH Hammerheads.

Piaggio’s most recent available balance sheet for 2016, showed revenues of €104 million and losses of €79.5 million, and by September 30, 2018, Piaggio’s debt seems to have amounted to €618 million. Italy’s new government faced a difficult decision: to approve the acquisition of the P.2HH system, or abandon the project. The latter would have meant that the historical company was destined to close down, and its workforce of 1,100 people laid off.

However, the defence planning paper for the period 2018 to 2020, published in October 2018 included the P.2HH system. To date, the P.2HH has only been unveiled on paper with no mockup or prototype seen. The new air vehicle should in theory be a development of the P.1HH, with a new bigger wingspan, composite winglets, a new longer front wing, reinforced landing gear (the air vehicle’s maximum take-off weight should be 15,000kg/33,000lb), and a new, reinforced dorsal fin. Piaggio claims it can produce the first prototype within three years of the green light.

To resolve the difficult situation, the Italian government tried to convince Leonardo to buy significant shares in Piaggio, but the group’s leaders were far from enthusiastic about the proposal; in addition to the economic aspect, Leonardo is already involved in the Euro MALE programme with Airbus and Dassault, making the P.2HH a direct competitor.

In October and November 2018, Italian Prime Minister Giuseppe Conte visited the UAE, where he met Prince Mohammed bin Zayed al Nahyan for a series of meetings, which included discussion about the situation at Piaggio: at a time when the Italian Parliament had begun to reconsider the Hammerhead programme.

The UAE was asking for 50% of Piaggio shares to be acquired by Leonardo. In Rome on November 20, a meeting between the government, local institutions, trade unions, and the company was expected to provide a solution.

Unfortunately, nothing considerable by way of news came from the meeting, only a government statement saying a study is underway for a long-term solution. This was taken by some as an indication of a real possibility that Leonardo was to acquire the majority of Piaggio’s shares. So, the November 22 decision taken by the Piaggio Board, to ask the Ministry of Economic Development (a controlled administration under Marzano Law) to consider a state of insolvency for Piaggio, as requested by Mubadala was met with some surprise.

On November 28, Leonardo’s CEO, Alessandro Profumo said: “We must understand how the situation evolves, and then do an evaluation.” On January 27, Prime Minister Conte made another visit to the UAE, mainly to finalise a big deal in the oil and gas industry, but also to discuss the situation at Piaggio Aerospace; at the time of writing, it is still a situation with a great deal of uncertainty, particularly as no statements were made following the meeting.

Leonardo may still acquire 50% or more of Piaggio, but without a wellfounded industrial plan and without P.2HH orders from Italy and the Emirates, it’s difficult to predict what the future holds for Piaggio.