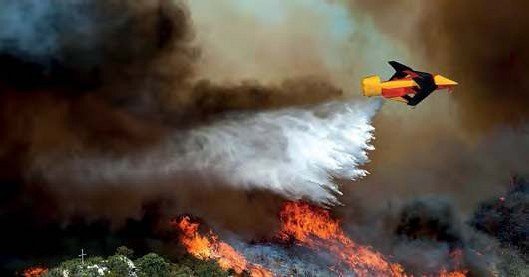 A UK company has announced plans to develop an unmanned ire-ighting aircraft. The Faradair Aerospace BEHA M1-AT (Airtanker) will be a remotely piloted variant of the BEHA M1 (Bio-Electric Hybrid Aircraft) turboprop the Gloucestershirebased company launched at July’s Farnborough Airshow. The BEHA M1 is one of three variants of the new aircraft concept, the others being hybrid (BEHA H1) and all-electric (BEHA E1).

Faradair says discussions are ongoing as to the “speciication capability and design optimisation adjustment” to the BEHA M1 that will be required for the BEHA M1- AT, which the company believes will ofer a cost-efective aerial platform for ire suppression.

A statement said: “The ability to fly a leet of autonomous BEHA M1-ATs to a ire location, providing continuous low-level delivery with greater payload capability than helicopters for less operational cost and zero pilot risk, is an attractive proposition. Powered by a 2,000hp turboprop engine (yet to be inalised), the BEHA M1-AT ofers nations and ireighting services an aircraft that can fly autonomous ire retardant delivery, without risk to a manned crew in repeat cycles over an autonomous track.”

The BEHA M1-AT will have an 11m (36ft) wingspan and a 10,000kg (22,046lb) payload. The BEHA aircraft has a triple box-wing coniguration, designed to allow for short take-of and landing capability, a large payload capacity and hybrid light if required. BEHA is designed to operate from any surface and in conined spaces, with the propeller in the rear duct lessening the risk of foreign object damage.

Faradair is a start-up hybrid electric aircraft development company and says it is working with partners to “deliver innovative prototype aircraft and propulsion systems”. BEHA is currently undergoing design optimisation at Swansea University and scale model lights have been conducted in Sweden. Mark Broadbent