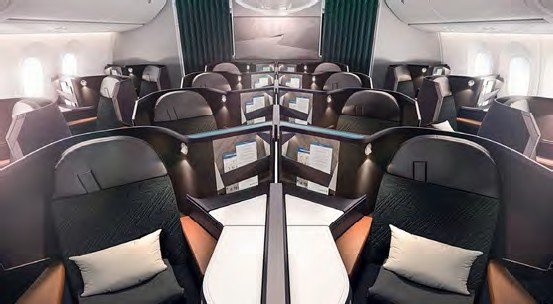 WESTJET HAS confirmed that its flagship Boeing 787 Dreamliner will join the company’s popular seasonal route between Vancouver and London/ Gatwick from next April. The move is part of an aggressive ramping up of its 787 operations as further examples enter the airline’s fleet.

The Calgary-based outfit is due to receive three additional Dreamliners in 2020 bringing the airline’s total to six, based on overall options for up to 20 examples.

WestJet, previously known for its no-frills approach, has moved into the network carrier arena in recent years.

As a result, its 787s are equipped with a three-class configuration, sporting business (pictured), premium and economy options, representing a major improvement versus its 767 fleet.

Arved von zur Muehlen, WestJet chief commercial officer commented: “Our Dreamliner service is unique to WestJet… and as we welcome new 787 deliveries, we continue to showcase WestJet’s award-winning guest experience to the world.”

Notable additions to WestJet’s Dreamliner operation for summer 2020 include an earlier launch of 787 services between Gatwick and Calgary, operating daily as of April 14, domestic year-round flights between Calgary and Toronto/Pearson beginning in June, and a seasonal link between Calgary and Rome/Fiumicino from May 2. (Photo WestJet)