Two former Royal Canadian Air Force Avro Lancaster mid-upper gunners were present at the Greenwood Military Aviation Museum in Nova Scotia on 7 June to witness the installation of a Frazer Nash FN-50 midupper turret into combat veteran Lancaster X KB839. One of the first batch of Lancasters built by Victory Aircraft at Malton, it is the only surviving Canadianconstructed Lancaster that was originally fitted with a Frazer Nash mid-upper turret, the other seven having the electrically powered Martin 250 turret, the weight of which necessitated moving the turret position further forward.

The two veterans were Greenwood resident Flt Sgt Clark Montgomery, who flew the first two of his 14 ops as a tail gunner before moving to the mid-upper position with No 428 ‘Ghost’ Squadron, RCAF, based at RAF Middleton St George in County Durham — he will turn 98 in December — and Lt Col Russell Hubley, who flew 60 missions as a flying officer with No 405 Squadron, the only Canadian pathfinder unit, based at Driffield, Yorkshire. Hubley, who now lives in a veterans’ hospital in Halifax, Nova Scotia, will also celebrate his 98th birthday at the end of this year. The occasion was the first time Clark Montgomery had been in a Lancaster since the war.

Lancaster X KB839 was originally flown to the UK on 1 January 1945, and soon assigned to No 431 Squadron, wearing the codes SE-G. It then went to No 419 Squadron, where the codes VR-D and the name Daisy were painted onto the aircraft. It flew 26 combat sorties, returning to Canada on 5 June 1945, and was subsequently converted to Mk10AR (arctic reconnaissance) configuration, the nose being lengthened by 40in and cameras and electronic intelligencegathering equipment being installed. After serving with 405 at Greenwood and No 408 Squadron at Rockcliffe, KB839 was retired in 1961 and stored at Dunnville, before being flown back to Greenwood for display on a pedestal in 1964. 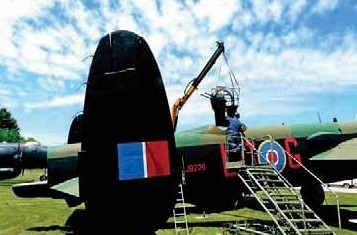 The Frazer Nash turret is carefully lowered into place over the recently constructed fairing on Lancaster KB839.
PAT HOUSE 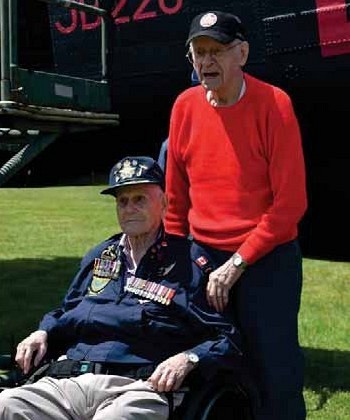 During April 2013 the Lancaster reconfiguration project to return the aircraft to wartime livery was approved by the 14 Wing commander. Since then, 1,800 volunteer hours have been expended on the aeroplane, with the nose section being returned to wartime configuration, a reproduction nose turret installed and a new bomb aimer’s bubble created, not to mention ongoing work to restore the tail gun turret and a complete repaint in the markings of JB226 Gutless Gert, a Gransden Lodge-based No 405 Squadron, RCAF machine that was lost over Hanover on 18 November 1943 having completed 60 missions.

Lancaster restoration team leader David Saulnier says, “The mid-upper turret was purchased from a collector in Uxbridge, Ontario during January 2016. It had been completely disassembled many years prior and stored in multiple boxes. The cupola glass was mostly missing or heavily damaged, and the guns, sight, and hydraulic motor were missing, but the rest of the turret was in restorable condition”. Saulnier spearheaded the mid-upper turret restoration, fabricating the entire turret fairing from drawings and photographs. Work on the turret and fairing took more than 800 hours to complete.