David C Isby spoke with two F-15E Strike Eagle aircrew about the aircraft, its upgrades and other requirements

The Boeing F-15E Strike Eagle is currently the most capable air-toground fighter in US Air Force service. Flown by a crew of two, pilot and weapons system operator (WSO), their skill and partnership is particularly important. The F-15E today is heavily engaged in combat in the US Central Command (CENTCOM) area of responsibility, from Afghanistan in the east to Syria in the west.

The 4th Fighter Wing, based at Seymour Johnson Air Force Base, North Carolina, has to be able to deploy and sustain F-15Es in combat in CENTCOM. At the same time, it trains to be ready to engage highly capable peer adversaries, especially those with an anti-access/area denial capability. Two of the aircrew meeting these challenges are Captain Caleb Jones, a pilot in the 335th Fighter Squadron, and Captain Aaron Richardson, an F-15E WSO in the 4th Operations Support Squadron.

Strike Eagle crew and the missions

F-15E crews fly and fight as a team. Richardson said: “During initial qualification training, students will usually be paired in crews to provide mutual support to one another as they learn how to fly and operate the jet for the first time. However, once we have trained a crew to the point they are combat mission ready, they are expected to be able to fly with any other pilot or weapons systems officer. To help crews operate efficiently as a team, our tactics manuals include entire chapters dedicated to standardising crew coordination contracts that aircrew brief, train and debrief to on every sortie. These contracts ensure that each crew member knows their role and expectations in the cockpit, no matter who they are flying with.”

Jones relies heavily on his WSO. He said: “The massive increase in combat capability that the WSO brings to the fight is something that is easily overlooked and misunderstood by our single-seat fighter brethren. As a two-seat community, we train to specific rolls and standards that allow us to easily fly with different crew members. At home station, it is unusual to fly with the same crew member every day. However, during deployments, crews will frequently fly together for extended periods to improve crew efficiency and task management.” 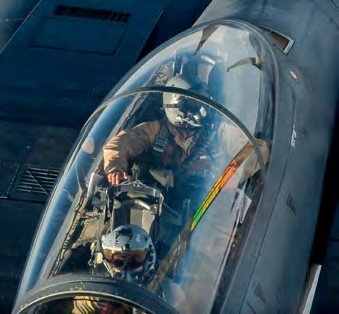 An F-15E approaches the flying boom of a KC-10 Extender for aerial refuelling during a strike mission in support of Operation Inherent Resolve.
Senior Airman Joshua Hoskins/US Air Force

F-15Es have been tasked to strike many different types of targets in combat dating back to Operation Desert Storm over Iraq in 1991. Jones said: “In recent deployments, the F-15E has been primarily used for preplanned deliberate strikes and provide close air support to friendly ground troops. Our typical pre-deployment spin-up training will emphasise these mission sets to increase aircrew proficiency; however, we still regularly train to combat proficiency in all mission sets assigned to the F-15E.”

All US Air Force fighter units face a high operational tempo, and, Jones said, none more than the relatively few squadrons equipped with F-15Es: “With only six operational squadrons, it is a virtual certainty that at any given time one F-15E squadron will always be deployed, while the others are either at an exercise or returning from one. This high ops tempo has meant that aircrew are gone three to six months a year during an average operational assignment, which has been one of the significant factors causing the current fighter aircrew retention problem.” 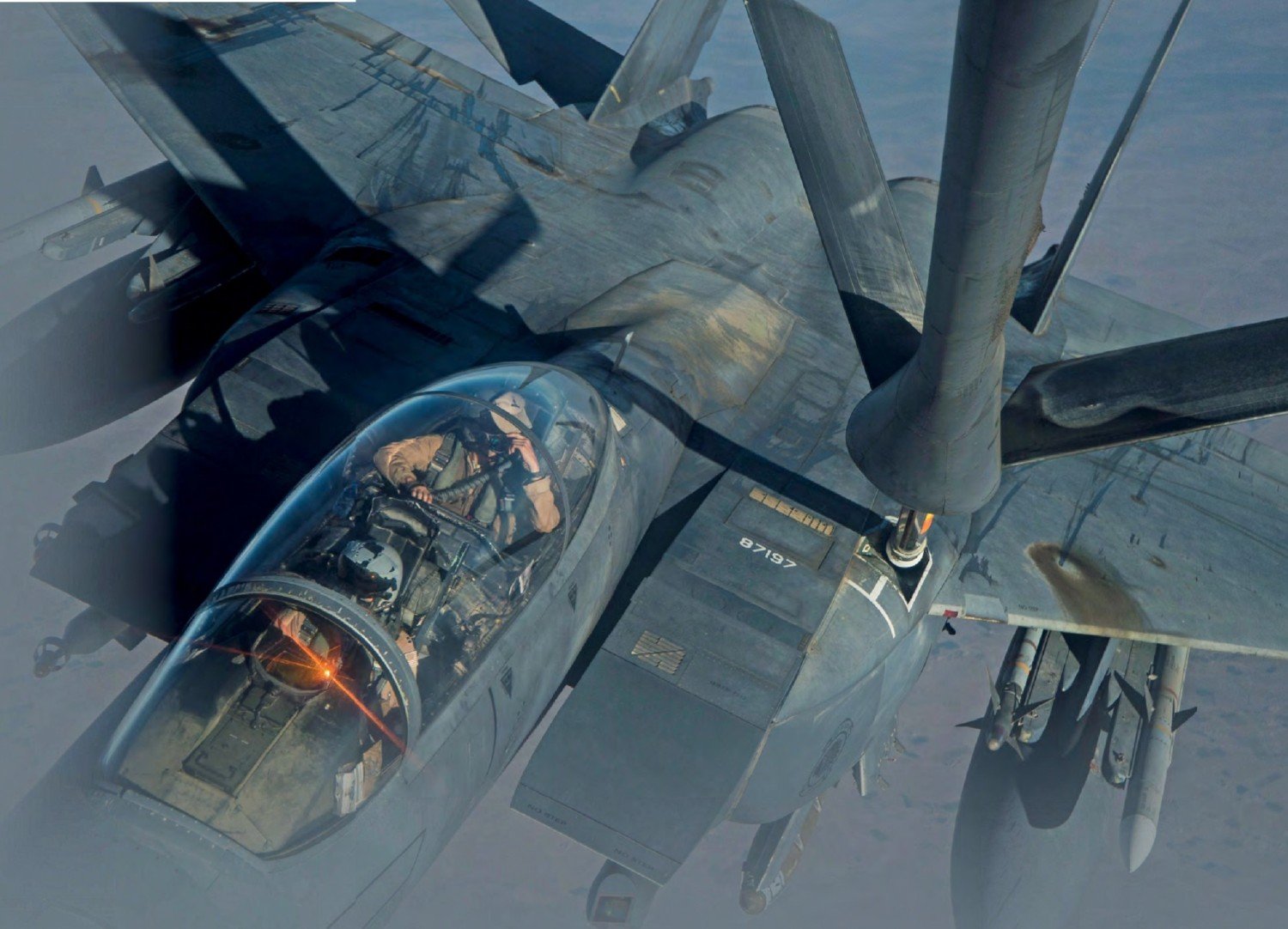 An F-15E Strike Eagle receives fuel from a KC-135 Stratotanker over Iraq. The image shows the visibility afforded to the two-man crew by the F-15E’s cockpit layout.
TSgt Larry Reid/US Air Force

Richardson set out in more detail what this ops tempo means for F-15E aircrew: “Back in 2010, the Air Force moved from four to six‐month deployments, which [for F-15E squadrons] means combat deployments now occur about once every two to three years; so while deployments are longer they are somewhat less frequent. Exercises, however, have increased in frequency. Following the shutdown of the [F-15C-equipped] 65th Aggressor Squadron, each [F-15E] squadron now spends anywhere between 20 and 40 additional days per year at Nellis Air Force Base to supplement the 57th Adversary Tactics Group. For aircrew, the additional 20 to 40 days are a double whammy because they are not only away from family, but also the time is spent replicating adversary tactics instead of training to the tactics we use in combat. When added to our existing schedule of exercises and deployments, an aircrew member will likely spend anywhere between one third and one half of an assignment away from home. That commitment is a significant obstacle to retaining fighter aircrew.”

The F-15E has been in service since 1988 and upgrades are currently in progress, intended to keep the type operationally viable until 2040. Richardson said: “The biggest upcoming advancements for the F‐15E are the addition of the APG‐82 [active electronically scanned array radar or AESA] and the AIM‐9X [air-to-air missile], both of which will radically change the way we train and operate in the air‐to‐air fight.”

The APG-82 AESA radar is at the heart of current F-15E upgrades. Jones said: “Seymour Johnson was the second of the three combat-coded F-15E bases to receive the APG-82. In fact, it was only recently [early summer] that our first jet to receive the upgrade returned to the flight line after months of overhaul work in the hangar. Our simulators were upgraded several years ago to replicate the APG-82, which has allowed aircrew to train and build proficiency with the new system in advance of its rollout in the fieet. The APG-82 gives the already formidable F-15E an exponential increase in combat capability and survivability in a hostile environment.” Explaining the improved capabilities the F-15E will get from the new radar, Richardson said: “The APG‐82 is a generational leap in radar performance and capabilities compared to our old APG‐70 [the F-15E’s original radar system]. First, the APG‐82’s AESA design allows the array to reposition its radar beam so rapidly that diverse tasks such as search, track, ground map and air‐to-ground ranging can be interleaved, together with near seamless transition. Additionally, because the APG‐82 steers its beam electronically, it makes the radar more reliable for both operators and maintainers.”

A critical F-15E upgrade, Richardson said, had been the Joint Helmet Mounted Cueing System (JHMCS): “It has been a gamechanger for the F‐15E in both air‐to‐air and air‐to‐ground. In the air‐to‐air arena, JHMCS allows us to make the transition from fighting beyond visual range to fighting within visual range [WVR] much easier. Once we get WVR, the JHMCS allows us to cue our weapons and radar on to the enemy by simply looking at them and pressing a button. All the while, the JHMCS also provides us constant positional awareness on our flight lead, wingmen and other friendlies in the [area of responsibility]. In the air‐to‐ground arena, the JHMCS allows us to find, designate and cue sensors to targets by looking outside the canopy. In close air support, this allows the WSO to focus on the detailed image fed from the targeting pod and talking to the JTAC [Joint Terminal Air Controller] while the pilot can focus on the broader picture outside. When this is combined with Blue Force Tracking [a ground forces system that identifies and tracks friendly forces], the pilot can also look out, press a button and instantly see the locations of friendly forces in his helmet.”

Jones also stressed the importance of the JHMCS: “The JHMCS is an incredibly powerful system for helping a pilot build 3D situational awareness about the battle space around the aircraft, regardless of environmental factors that hinder visual acuity, such as weather and darkness. Preliminary work has been done on our jets to support JHMCS for our WSOs as well, but there has been no funding allocated to complete the modification for the rear cockpit, which is unfortunate because of the tremendous capabilities it brings to the fight.”

Other upgrades have also increased F-15E capabilities. Richardson said: “Regarding the air‐to‐ground fight, the biggest advancements have been the addition of more and more players on Link 16 [datalink] and the ROVER [Remote Operational Video Enhanced Receiver] downlink that links the F-15E’s targeting pod to the JTAC’s receiver. This allows JTACs on the ground to see our targeting pod video feed in real time and use it to talk us on to the target.”

However, Richardson would like to see further upgrades that, like backseat JHMCS, are not currently funded for the F-15E: “One of the biggest advancements aircrew are fighting to get is in our displays. Right now, over half of our cockpit displays are old, green‐andblack monochrome screens from the 1980s. This is a problem because our targeting pod, our radar and our reconnaissance pod all produce images well above the resolution of these old screens; this means our old screens fail to display important details our sensors already capture. This is why many aircrew view high definition, colour displays as a simple, cost‐effective and vital combat upgrade worth fighting for.”

The view from the cockpits – front and back – of the F-15Es based at Seymour Johnson, show that this aircraft, the cutting edge of forward-deployed US airpower for years to come, is carrying out its missions despite the slow – and incomplete – upgrades and the high operational tempo. The current fighter pilot shortage facing the US Air Force – unlike the US Navy and US Marine Corps – was reflected in the latest FY2018 budget request, with addressing the readiness challenges imposed by personnel issues having to be a higher priority than procuring aircraft.