The fuselage of Douglas C-47A Dakota III FL547, which was used during 1944 as the personal transport of the general inspector of the Polish Armed Forces, Gen Kazimierz Sosnkowski, is currently stored in a compound at the Winnipeg, Manitoba home base of 17 Wing, Royal Canadian Air Force. It is hoped that this important piece of the country’s military history can be moved to Poland for restoration, and to that end Col Cezary Kiszkowiak, the Polish defence attaché to Canada, recently met with Col Andy Cook, the commander of 17 Wing, to inspect the aircraft.

Unfortunately, during 2006, while FL547 was stored in a field on the base, the wings were removed and partially scrapped by persons who were not aware of the history of the machine. Now the fuselage, both outer wings, one undercarriage assembly, the tailwheel assembly and the vertical fin remain. In October 2016 the fuselage was moved into a compound on the base to secure it from further damage, and the wartime markings are currently being re-applied by volunteers at 17 Wing. Using wartime photos of the aircraft as a guide, the name Spirit of Ostra Brama (Gate of Dawn) has been painted on the port side of the Dakota’s nose, and the Polish national insignia were applied to both sides of the fuselage behind the cockpit. Painting of Type C1 roundels and the serial FL547 on the rear fuselage will be completed soon.

“The Polish defence attaché to Canada recently met with the commander of 17 Wing, RCAF, to sinspect the aircraft”

Built at Oklahoma City during 1943, and originally taken on strength by the United States Army Air Forces as 42-92139, the C-47 was transferred to the RAF as a Dakota III on 24 January 1944. It was operated by No 216 Air Transport and Ferry Group, tasked with VIP and general transport work, which had a number of Polish airmen in its ranks. From July to September of that year it flew with an all-Polish crew under pilot Józefa Tyszko. The name Spirit of Ostra Brama commemorates the Ostra Brama gate in the city of Vilnius, Lithuania. Vilnius (Wilno in Polish) had been part of Poland before World War Two. Within the gate is an icon of the Virgin Mary, which is said to have miraculous powers. 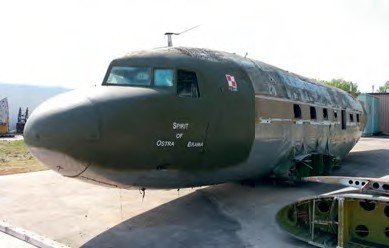 The fuselage of Dakota III FL547/CF-TES at Winnipeg, with the recently repainted nose art. The rest of the fuselage is still in the Transair scheme.
CAPT GORDON CROSSLEY 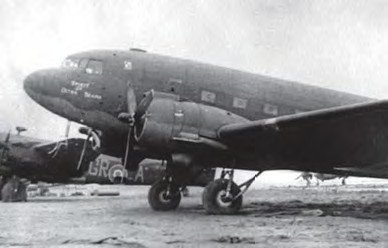 FL547 while serving with No 216 Air Transport and Ferry Group during the war, with Spirit of Ostra Brama just discernable on the nose.
VIA CAPT GORDON CROSSLEY

After the war the aircraft was acquired by Trans Canada Airlines (TCA), and during July 1946 conversion to civilian airline standard was begun by Canadair. Registered as CF-TES, it served with TCA until midnight on 12 April 1963, when it landed in Winnipeg to complete the last flight by a TCA DC-3. It was subsequently sold to Transair Ltd, repainted, and operated for four years with that carrier. In 1967 it was sold to Lambair, but retained its Transair livery, and was salvaged for parts and removed from the flying registry during 1970.