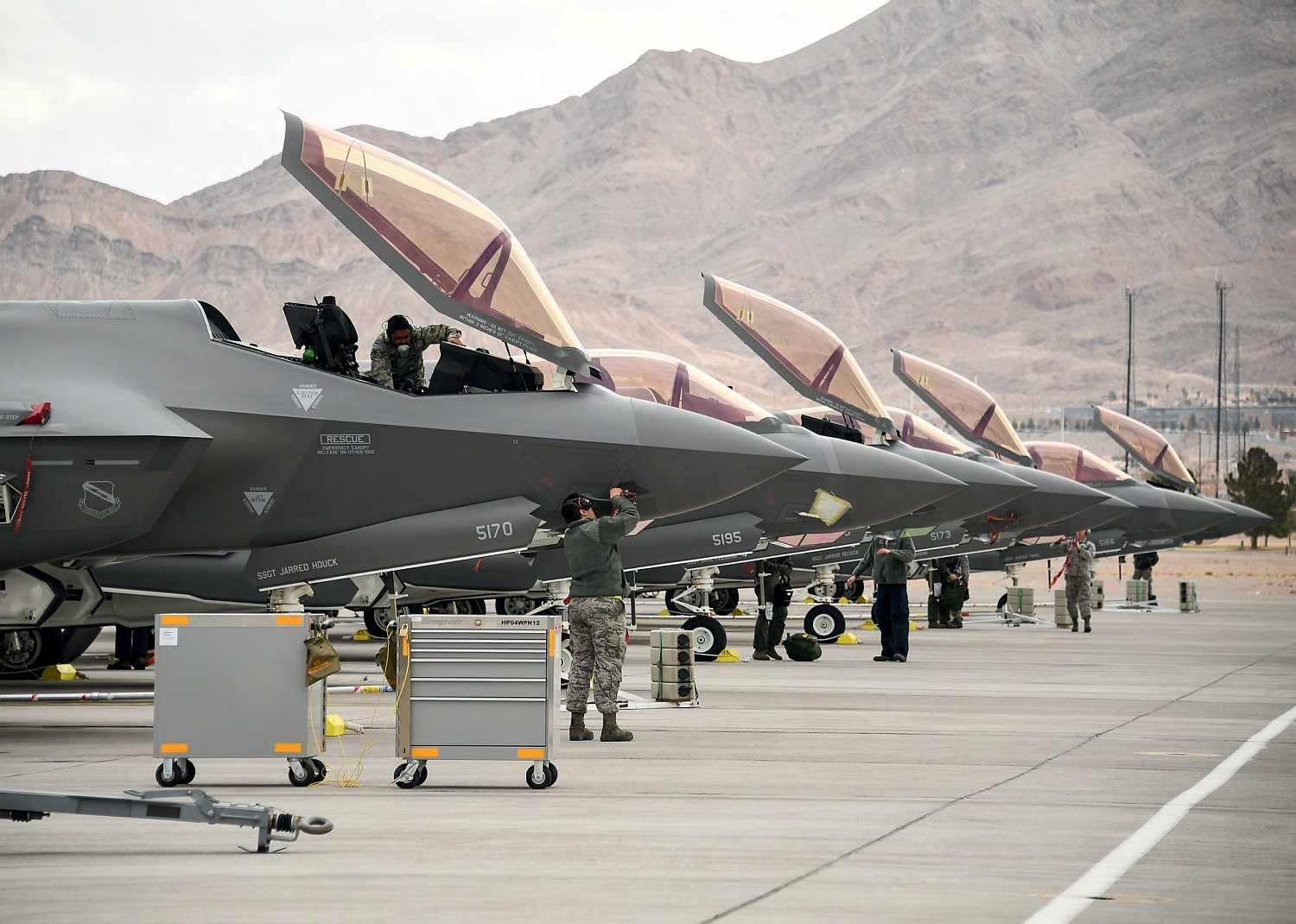 CONGRESS IS now considering the FY2020 budget request. As a result, there has been increased interest in Washington in both designs that are in the request but not yet flying – such as the fourth generation Boeing F-15EX Eagle fighter and the Army’s Future Long Range Assault Aircraft rotorcraft – as well as types that have been in production for years but are still encountering problems, including the Boeing KC-46A Pegasus tanker and the Lockheed Martin F-35 Lightning II.

F-15EX: take-off in the Senate

New-production Boeing F-15EX Eagles for replacing ageing F-15C versions flown by the Air National Guard was viewed sceptically when Secretary of the Air Force Dr Heather Wilson and Chief of Staff General David Goldfein testified before the Senate Armed Services Committee in Washington on April 4. This will be one of Wilson’s last appearances on Capitol Hill. She has announced her intention to resign and return to lead a university. No replacement for her has yet been announced.

Despite the Air Force’s previous reluctance to buy new fourth generation fighters, Goldfein defended the F-15EX, saying: “As long as we don’t impact the F-35 line, it is a reasonable thing.” He explained that the current F-15Cs would not be able to remain operational through the 2020s. He did not provide specifics on when F-15Cs would reach the end of their service, previously estimated at about 2023–2025. Goldfein stressed that the F-15EX “has a 20,000 flight-hour life expectancy” and that 90% of the support equipment currently used with F-15Cs would be usable with the F-15EX. While re-equipping with a new type of aircraft can keep an Air National Guard squadron non-operational for up to three years, the transition time from F-15C to F-15EX could be reduced to some six months.

Both the Air Force and Boeing have been slow to release information about the F-15EX. It now appears it will be similar to the F-15SA and F-15QA versions that Boeing’s St Louis, Missouri, facility has been producing for the Kingdom of Saudi Arabia and Qatar respectively. All F-15EXs will be two-seat aircraft, even though the Air Force intends to operate them with only a pilot; the Air Force has reportedly decided not to buy the single-seat F-15CX version to maximise commonality with current production. The F-15EX will be integrated with a number of USonly systems, including the Boeing Eagle Passive Active Warning and Survivability System, currently in production for retrofit to the F-15E.

F-35: sustainment and the Turkish issue

General Goldfein’s April 4 testimony stressed the need to expand US Air Force fighter procurement numbers for the Air Force, given requirements for other users: “We’ve got to get up to 72 aircraft per year …60 F-35s are what we are told the company could produce.” The difference would be made up by F-15EXs. He was “adamant that the F-35 programme – the programme of record – absolutely stays on track”.

The same day, the head of the F-35 Joint Program Office (JPO), Vice Admiral Mat Winter, testified before the House Armed Services Committee (HASC). He said: “Future potential foreign military sales customers include Singapore, Greece, Romania, Spain and Poland.” This follows an announcement that the US Department of Defense was suspending deliveries of F-35s and parts to Turkey following that country’s decision to procure Russian-built S-400 surface-to-air missile systems, although Turkish pilots are continuing to train on the first two Turkish Air Force F-35s at Luke Air Force Base, Arizona.

With Turkey responsible for some 6–7% of the F-35 supply chain, Winter has been looking at the impact of a potential Turkish withdrawal. He said: “Our evaluation of Turkey stopping [F-35 programme participation] would be a 50 to 70 aircraft impact [reducing worldwide production] over a two-year period. From a timeline, within 45-90 days, it would have an impact of slowing down or stopping parts going to all three production lines.”

The sustainment issue – that the F-35 has the potential to impose unaffordable costs on the air arms that operate it – has dominated the programme in the past year.

Winter told the HASC that using “agile development techniques and methodologies, the F-35 has turned a corner”. Lockheed Martin has agreed to achieve a target of reducing the operating cost for F-35As to $25,000 per flight hour by FY2025. This would bring the F-35A’s cost per flight hour down to a level comparable to fourth-generation fighters. Winter has confidence this will happen, citing improvements in “F-35 repair times, spare parts posture, production line flows and labour skills to reduce sustainment costs”.

The FLRAA is the replacement for the UH-60 Black Hawk utility helicopter; likely competitors include those based on the Bell V-280 Valor tiltrotor (flying since 2017) and the Sikorsky Boeing SB-1 Defiant coaxial rotor compound helicopter.
Sikorsky

However, the F-35 programme is still dealing with multiple sustainment issues. Winter said: “We are putting out a big demand signal for spare parts for sustainment.” He explained that the increased F-35 operational tempo has had an impact on the supply chain, and that the current demands on the 3,000 suppliers that provide parts for the production line and sustainment are struggling with the demand signal.

He said that industry is still repairing parts that are breaking and sees the solution for the US services as one that shifts responsibility for repairing F-35 parts to Air Force and Navy depots, so that industry can focus on what it does best: generate new parts.

Winter said Pratt & Whitney and Lockheed Martin’s demand signals lagged to get their supply chains up the ramp as F-35 production increased. He said: “[It is] still lagging; some 200 parts arrive late every month at Lockheed Martin. This pushes work down the production line.” The result is “lots of extra management and extra work that drives prices up”.

Winter said the F-35 was on track to achieve an 80% mission capable rate for combat-coded aircraft this year; current figures are 61% for the F-35A, 64% for the F-35B and 84% for the F-35C, while deployed aircraft, including the F-35Bs aboard the USS Wasp, achieved 65-85%. Winter credits increasing the availability of spare parts on the flight line, improving organic capability to repair parts and accelerating depot stand-ups in the United States as some of the reasons for the improving availability rates. According to the JPO boss, operators had previously had to send back parts for repair, but can now do a repair on the flight line which will increase the mission capable rate.

The Block 4 upgrade programme is aiming to provide new capabilities at six-month intervals through 2025. Winter said: “Prioritisation for upgrades to be incorporated in Block 4 were identified when the JPO looked at Block 3F [the current baseline] to see what enhancements needed to be made to stay in front of threat.”

Because all structural work now has a maturity level, Winter described Block 4 as comprising about 80% software or modification of current software, and 20% enabling hardware that will not change the aircraft’s external mould line and will not require extensive flight testing.

In her April 4 Senate testimony, Wilson was asked about the March 23 Air Force decision to again suspend deliveries of Boeing KC-46A Pegasus tankers after seven aircraft had been delivered. Inspections had again revealed foreign objects and debris in aircraft rolled off the production line at Everett, Washington. Wilson said deliveries had been halted pending a further review of the problem and putting in place new safeguards but stressed “production is going forward”.

The Army’s Future Vertical Lift (FVL) rotorcraft programme, is being funded at some $780 million in the FY2020 budget request, and is one of its top six Army modernisation priorities. On April 4, the Army issued a request for information (RFI) to industry, starting its Future Long Range Assault Aircraft (FLRAA) programme. The FLRAA represents FVL Capability Set 3, a replacement for the UH-60 Black Hawk utility helicopter. The likely competitors will include those based on the Bell V-280 Valor tiltrotor (flying since 2017) and the Sikorsky Boeing SB>1 Defiant coaxial rotor compound helicopter (which first flew in 2019). These were funded as joint multi-role technology demonstrator rotorcraft, designed to Capability Set 3, in 2014.

The RFI wants information on designs that could enter service by FY2030, with the potential for followon versions capable of carrying 12 troops, cruising at 250–280kts (460-518km/h) and lifting a 10,000lb (4,535kg) external load specifically for use by the US Marine Corps and Special Operations Command.

The Army does not want to spend more than $43 million per production standard aircraft in current-year dollars. With the Army emphasising operations against great power adversaries, it may be significant that long range is included in the name of the new aircraft. The RFI asks for an aircraft with an unrefuelled ferry range of at least 2,440 nautical miles (4,519km) and an unrefuelled combat radius of 300 nautical miles (556km). The Army aims to select an FLRAA design in FY2021 and to have a prototype flying in FY2024.

The Army’s track record of expensive failures in rotorcraft development in recent decades means the FLRAA is likely to start receiving congressional scrutiny even as industry prepares responses to the RFI.