More military aviation milestones were clocked up across the Asia-Pacific region in May, including weapons clearances in India and Singapore, a handful of notable first flights for Indian and Chinese aircraft, helicopter programmes and the prospect of further helicopter deliveries, again in India but also in Pakistan.

With heightened tension on the Korean Peninsula, Islamic State insurrection in the Philippines and China’s continuing belligerence in the South China Sea all making news at the present time, there are also a number of countries in the region actively seeking additional surveillance capabilities. Malaysia for example has been linked to a potential acquisition of surplus Japan Maritime Self Defense Force Kawasaki P-3C Orion maritime patrol aircraft, and the Philippines has recently accepted the first two of five Beechcraft TC-90 aircraft.

The Indian Ministry of Defence announced on May 12 it had successfully conducted the launch of a Rafael Derby missile from a HAL Tejas Light Combat Aircraft, in an important step towards declaration of Final Operational Capability (FOC) in June. Rafael’s Derby is a radar-guided beyond visual range missile.

The test, conducted at the Chandipur Interim Test Range on the Bay of Bengal, utilised the Derby’s Lock On After Launch mode, to assess integration of the Israeli weapon with Tejas. The missile shot successfully destroyed a manoeuvrable expandable aerial target.

After the test an Indian Ministry of Defence spokesman said: “The test firing achieved all its planned objectives. The Derby firing is a major step towards clearing BVR capabilities on the Light Combat aircraft for FOC.”

Singapore does not routinely provide details of its weapons clearance work, but in May it revealed the 1,000lb GBU-31 Joint Direct Attack Munition (JDAM) was released from a Republic of Singapore Air Force F-15SG Eagle for the first time.

Tejas KH-2014, loaded with a Derby missile on the inner wing hard point prior to first launch. Note the two cameras carried on the under fuselage hard point and the pod on the outer wing pylon.
Armament Development Agency 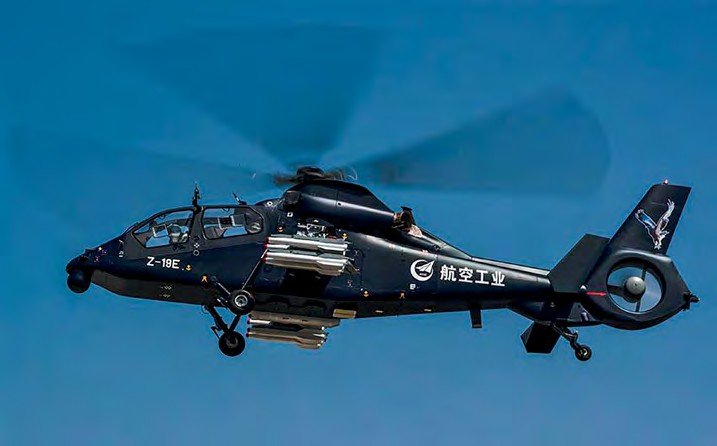 The trial was undertaken by an F-15SG Eagle assigned to the 428th Fighter Squadron, based at Mountain Home Air Force Base, Idaho during an edition of Combat Hammer, Air Combat Command’s air-to-ground Weapon System Evaluation Program staged at Hill Air Force Base Utah.

Republic of Singapore Air Force weapons instructor with the 428th Fighter Squadron, Captain Chia Chi Yu said: “The highlight for this evaluation is the GBU-31. This is the first time we are deploying this munition with the F-15SG.”

Besides the F-15SG aircraft based at Mountain Home, Singapore has two F-15SG units, 142 Squadron ‘Gryphon’ and 149 Squadron ‘Shikra’ based at Paya Lebar.

China’s Xinhua newsagency reports the first Harbin Z-19E armed helicopter made its maiden flight from the Aviation Industry Corporation of China (AVIC) production facility on May 18.

Built by the Harbin Aircraft Industrial Group, the Z-19E is the export version of the Z-19 light attack helicopter already in service with the People’s Liberation Army Air Force (PLAAF). First launched in 2015, the 4-tonne helicopter will be offered at half the price of two of its main rivals, the Airbus Helicopters Tiger and Leonardo A129 Mangusta, Chinese sources claim.

AVIC Harbin Aircraft Industry deputy chief designer, Li Shengwei told Xinhua: “It is able to be deployed for battlefield support and a variety of other missions in a complicated battlefield environment during both day and night.”

The indigenous HTT-40 is intended to replace the HPT-32 Deepak piston-engine basic training aircraft, but the programme has suffered long delays and won’t achieve operational clearance until 2018.

HAL managing director T Suvarna Raju told the Press Trust of India: “The second prototype was made ready within one year and flew for one hour, carrying out important manoeuvres.”

The first prototype flew in May 2016. Ultimately, three aircraft and two static test airframes will be used in the test programme.

In what was a big month for India’s aviation industry, HAL also flew the second prototype of its Light Utility Helicopter at Bengalaru on May 22. Known as PT-2, the second helicopter incorporates a modified tail boom and other improvements, as a result of experience gained from the flight test campaign of the first prototype, which first flew in September 2016.

Raju said: “These maiden flights of indigenous aircraft are testimony to HAL’s rapid progress towards Make in India campaigns in both fixed and rotary wing segments. These prototypes add strength to ongoing test flights to achieve operational clearance cutting the timeframe.”

The 3-tonne LUH is intended to replace the elderly Cheetah and Chetak helicopters in service with the Indian Air Force and Army. Raju said that HAL hopes to freeze the basic configuration by the end of this year.

Meanwhile, India’s plan to acquire the Boeing AH-64E Apache has gathered momentum, at the end of May local press report a deal has been struck between the Indian Air Force and Army as to who will operate the helicopters.

India has requested 22 Apaches, together with 15 Boeing CH-47F Chinooks via a Foreign Military Sales agreement announced in November 2015. But the attack helicopter fell foul of internal politics, with both the Indian Air Force and Army laying claim to them. However, on May 22 Indian media reported a recent Defence Acquisition Council meeting in Delhi has agreed to an additional 11 Apaches; 22 to be operated by the Air Force and 11 by the Army.

Finally, the Pakistan Navy has formally accepted seven former Royal Navy Sea King helicopters, including at least one HC4 Commando, in a ceremony attended by Pakistan’s High Commissioner to the United Kingdom, H.E. Syed Ibne Abbas, on May 24.

The contract was signed in 2016 and the seven helicopters will be overhauled by Vector Aerospace and shipped to Pakistan later this year. 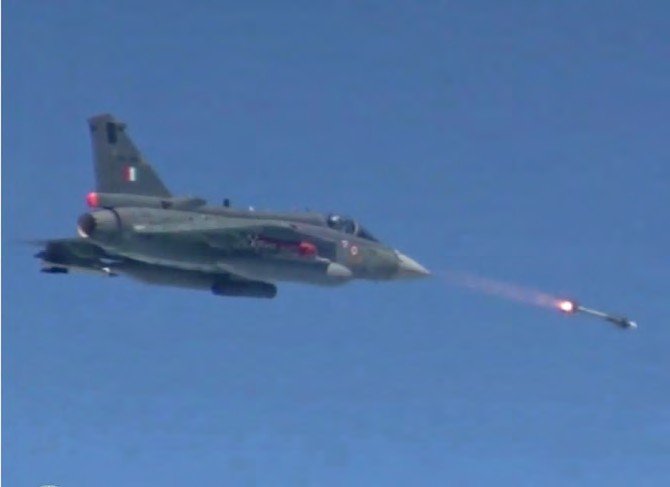 A screen grab from the video depicting the first Derby missile shot from a Tejas fighter.
Armament Development Agency