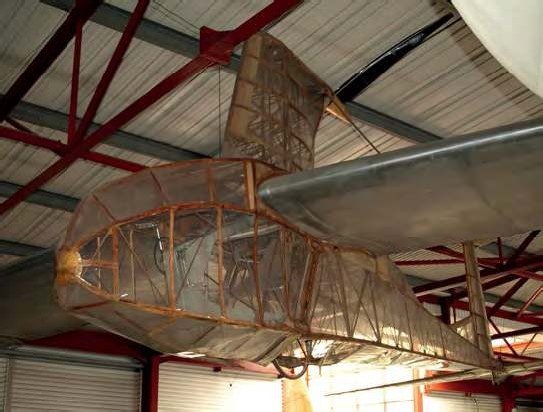 Now almost 60 years old, the SUMPAC human-powered aircraft hanging from the ceiling at Solent Sky. Note the large pylon for the pusher propeller.

At the Solent Sky museum in Southampton, new displays are being constructed to better tell the story of the Southampton University Man Powered Aircraft, or SUMPAC, which on 9 November 1961 became the irst humanpowered aeroplane to make an oficially authenticated take-offand light.

Designed and built by a team of postgraduate students from Southampton University with funding from the Royal Aeronautical Society, the machine made its maiden light at Lasham airield, Hampshire with the legendary glider pilot Derek Piggott at the controls of the pedal-powered pusher. The irst light covered a distance of 70 yards at a maximum altitude of 6ft. A total of 40 lights were made, the longest covering 650 yards, during which Piggott achieved an altitude of 15ft. Following damage to the fragile structure in a crash during 1963, the SUMPAC was repaired, but a decision was soon made to retire it.

Although the SUMPAC went on show, hanging from the ceiling at the Southampton Hall of Aviation (now Solent Sky) in 1984, the accompanying displays did little to inform visitors of the signiicance of the machine. That is now being addressed by the SUMPAC Legacy Project, which is being headed up by the last surviving member of the original design team, Cdr Raymond Hale RN (retired). A man-powered aircraft simulator is being constructed, and an interactive display unit is being set up on the balcony at the museum, immediately beneath the nose of the SUMPAC. As well as providing visitors with the opportunity to investigate the story in more detail, it will include guidance on how to design and build a humanpowered aeroplane, and will be a source of information on the work of the British Human Powered Flying Club.

Raymond says, “The project aims to provide a high-quality display to explain the achievement and the subsequent development of human-powered lying as an international sport. The simulator will be set up on the balcony using a SUMPAC pedal frame with power sensors. The aim is to let visitors try and pedal hard enough to take offand ly an HPA. This high-quality facility will also be made available to help train pilots and athletes to ly a range of different HPAs in competition conditions.

“Students from the Southampton University Human Powered Aircraft Society (SUHPA) recently visited and tried it out. They are constructing a transparent nosecone and cockpit cover for the simulator before it can be set up at the museum landing for use by visitors or by trainee HPA pilots. They are also working on improving their own HPA project at the university and, I understand, hope to ly it in the ICARUS cup competition to be run by the British Human Powered Flight Club next year.”

It is intended to complete the project and stage an opening event during early 2019.