What does the Future Hold for Military Airlift?

In anticipation of its upcoming conference, Military Airlift 2017 IQPC commissioned a survey of those involved in the sector. AIR International had a look at the results 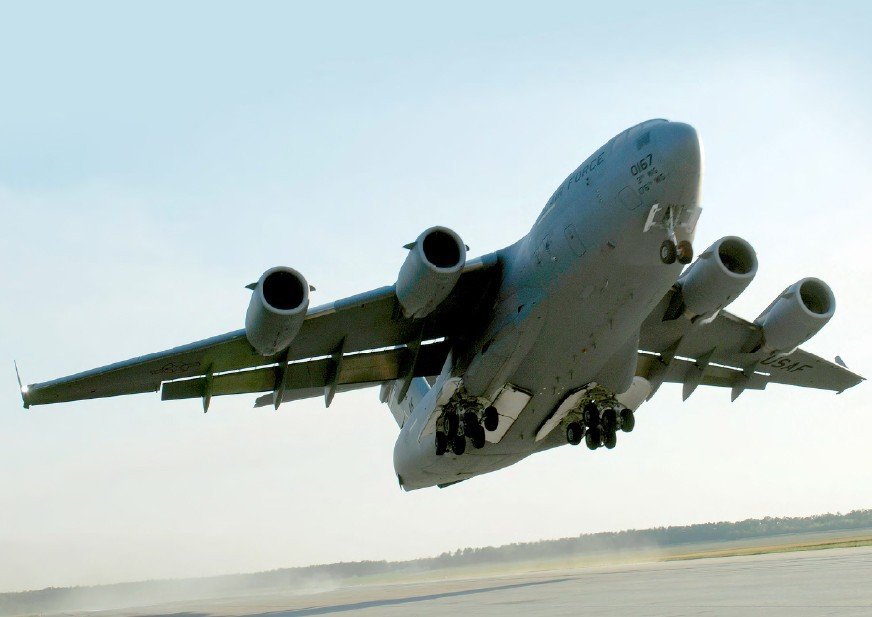 The company polled 207 organisations worldwide and half of the respondents came from Europe. Of the others, 9% came from the Middle East, 9% from the Asia- Pacific region and both North America and Africa provided 12%. South America and the Caribbean only supplied 7% of respondents. A third of the organisations answering the questionnaire identified themselves as military, a quarter as academics and analysts, 14% each as industry or government, and 5% as media.

The next question dealt with priorities in investment in three critical categories: personnel development, procedures and equipment. Participants were asked to rate the importance of these facets from 1 to 5, with 5 being the most important. The survey found very little difference between the respondent types, with all agreeing that the three categories were of almost equal importance, with equipment narrowly coming out in front at 3.85%, ahead of personnel development at 3.58% and procedures at 3.56%. It is perhaps not surprising that all three rated highly, because, of course, without one of these aspects the rest cannot function.

Modern military airlift is about a lot more than hauling trash and the next question reflected that: “What are your biggest challenges in the airlift space?” Of the six parameters offered to survey-takers, interoperability came out on top at 46%. It was not defined, but can be assumed to mean working with partners. Next most important was, again not surprisingly, reducing cost at 37%. Overall, the arenas concerning the aircraft themselves, namely life extension of legacy aircraft and communications and navigation, as well as interoperability, were most important. Personnel training and ensuring the security and availability of fuel were significant causes for concern at 36%. We can see that getting the biggest bang for a buck is important in these days of austerity. Manufacturers need to consider operating costs as much as cargo hold space when pitching an airlifter to a prospective customer.

Modern airlifters are expensive jacks-ofall- trades and customers expect a lot for their money. The next question reflected: “How do you view the pace of progress of technological advancements in the airlift space?” Again, the questionnaire wanted answers rated from 1 to 5, with 5 being most satisfied. Across the board responses were remarkably similar for both tactical and strategic airlift at 3.5% and 3.85%. Given that operators would have chosen their equipment to suit their needs and manufacturers build what they believe is needed by customers, satisfaction levels like these are perhaps to be expected.

The next area to be investigated was perhaps one of the most interesting: “In what area of technology in this domain will see the most investment over the next 5–10 years?” The clear leader at 21% was modular components and interoperability. Ease of operation and commonality of, for instance, pallets and ground equipment saves time and makes for better use of resources. It makes sense for operators to buy equipment that can easily be serviced wherever it is deployed and can use commonly found ground support equipment rather than relying on type-specific infrastructure. Respondents considered engine development (14%), air-to-air refuelling (12%), airframe development (12%), open architecture systems or OAS (11%) and satellite-based datalinks (11%) to be of almost equal importance. The area thought least likely to see investment was counter-radar/evasive technology or stealth. 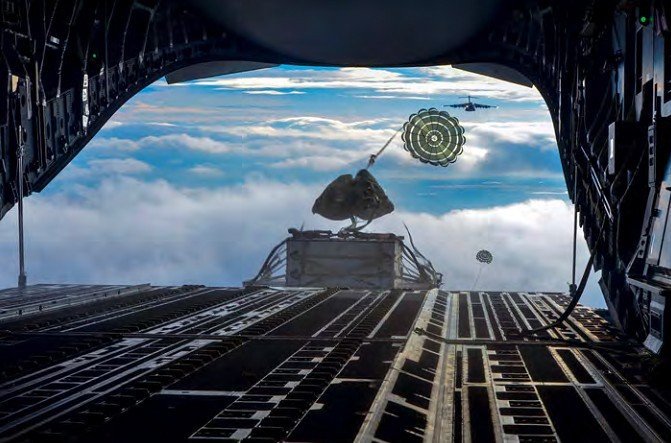 A heavy container plunges from the back of a C-17 Globemaster III during an airdrop using the container delivery system.
SSgt Russ Jackson/US Air Force

Those consulted differed in their perceptions of relative importance depending on whether they came from the military or industry and consultants. Over a third (37%) of military respondents wanted investment in modular components against only 24% from industry and analysts. A wider gulf in priorities was apparent in investment in OAS; more than a quarter of the military (26.3%) identified it as important while a mere 6% of industry considered it so. This is perhaps a consequence of the different objectives of the two groups: one wants to save money and the other wants to make it. Open architecture allows ongoing development and improvement of systems or changing the use of a piece of kit without replacing an entire system or buying a discrete computer for each individual task. OASs are designed to make adding, upgrading and swapping components easy, usually with commercially available off-the-shelf components.

This is much to the liking of consumers, of course, but not so good for manufacturers who might prefer a closed architecture to which only they have access, thereby providing them with a monopoly over its improvement, modification and maintenance. Another stark difference was between the importance ascribed by industry to airframe development (18%) and the military (5%). Again, budgets dictate air forces use a basic aeroplane for as long as it is safe and economic to do so; they are in no rush to buy another one. Industry’s priorities are obviously different, with a desire to shift units to make money for shareholders.

The survey then asked about research and development over the next five to ten years, particularly the areas where respondents perceived the greatest need in advances being made. Clear leaders, each polling 16%, were modular airframe components and interoperability, satellite-based datalinks and OAS. Closely behind these were airframe development (14%) and counter radar/ evasive radar technologies (12%). Industry respondents’ expectations for development were highest in airframe development and modular airframe components, each at 24%. Industry agreed with the military on the likelihood of the second category being very important (both 26%), but it put much less importance on airframe development (11%). Again, this is not at all surprising. Both parties can be expected to see the benefits of reduction in cost brought about by greater commonality of components leading to a requirement of less training for users and maintainers. The system provides a flexibility in design allowing augmentation of a system by simply plugging in a new module. However, air forces are not so keen on trying out new designs of aeroplane. President Clinton’s Keep It Simple Stupid (KISS) dictum is beloved of those responsible for buying expensive platforms and support equipment in any field. It is hard to think of any military programme that has performed as advertised from the get go. While some of the costs associated with bringing an airframe up to specification can be recouped from the manufacturer, a lot of time and effort can be expended bringing a platform up to scratch and it’s not just the financial penalties. New programmes are scheduled to be introduced according to an exacting schedule and the inability for a new aircraft to perform as advertised can also cause scheduling difficulties that can potentially lead to a loss of life at worst and almost guarantee severe logistical problems. A leader of one of the world’s most advanced air forces was overheard saying, apropos of his nation’s purchase of a new fleet: “If I ever suggest going lead on a new programme again, shoot me!”

Finally, the survey participants were asked to rank their preferences in mode and platform in procuring airlift assets. The choices presented to the survey-takers were: single-country, single-role aircraft; single-country, multi-role aircraft; multi-country; resource pooling; and multi-country, interoperable craft. For the military, the most important consideration when buying an airlifter is flexibility. Ideally, a platform will be rugged enough to get in and out of small unprepared austere locations with a meaningful payload and a high probability of survival in contested areas. Such a machine would also be able to carry diplomatic mail between capitals and be easily transformed into a hospital or CASEVAC platform. The ability to drop paratroops and deploy special forces would be good, as well as being able to perform a search and rescue role with the addition of roll-on/roll-off special mission equipment. Manufacturers are happy to provide all or some of these capabilities at a price. There was little call from the military for a singlerole aircraft operated by one country, with 57% saying it was their lowest priority. However, a surprising 26.3% specified an aircraft operated in that manner as their priority. It may perhaps be that in that case respondents were thinking of long-range airliner type machines for hub-tohub operations, but the survey does not make it clear. 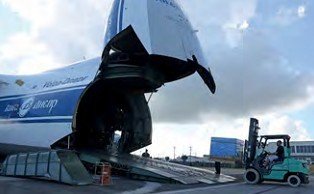 Airmen offload an HH-60G Pave Hawk from a C-17 Globemaster III at Bagram Airfield, Afghanistan. This shot was taken at the end of May 2015 by which time US Air Force airlift aircraft had delivered 19,900 short tons of cargo throughout Afghanistan.
TSgt Joseph Swafford/US Air Force

Most nation’s air forces own a fleet of transport aircraft. That would seem to be the situation described by the option for singlecountry, multi-role aircraft. Answers to the preference of this setup were more ambiguous, with 15.8% saying it was their priority, but second and third places ascribing it 36.8% and 31.5% of the vote. Only 15.8% thought it was the worst option. This may seem strange, but it should be borne in mind that although aircraft may be owned by one nation most countries operate as part of a coalition or an organisation such as NATO or on behalf of the UN, so they maybe transporting men and materiel on behalf of other nations. The option for formal multi-country, resourcepooling wasn’t very popular either, with only 15.8% of respondents electing for that mode of deployment as their first choice, the same number as those who made it their last. Second and third choices were very close at 31.6% and 36.8% respectively. The reluctance to choose this option probably reflects the reality that this situation already prevails, as explained above. The final option, multi-country, interoperable craft, got most votes (42.1%). This seems to be the coming thing. It allows countries to use a capable modern transport fleet that perhaps could otherwise not afford it whilst sharing the cost with other nations. Perhaps the first recent example of this was the NATO arrangement for E-3A Sentry airborne early warning and control aircraft. Such a system spreads the load of maintaining and running an expensive fleet and allows participating nations to contribute when they could otherwise not. It also means that the host organisation has access to valuable assets individual nations could never have provided. That was the idea behind the Strategic Airlift Capability (SAC), a consortium of 12 nations, ten of which are members of NATO plus Finland and Sweden, which are Partnership for Peace members. SAC pools resources to operate three C-17A Globemaster III aircraft for joint strategic airlift missions. The idea has been continued with the proposal for a Multinational Multi-Role Tanker Transport (MRTT) Fleet jointly owned and operated by a consortium of European nations. To date, two A330 MRTTs have been ordered by founder member the Netherlands, where the aircraft will be based at Eindhoven Air Base and Luxembourg. Recent joiners Germany and Norway have pledged to buy five more jets, with the possibility of four more. It is clear from the survey that such joint initiatives are seen as the way to go from a military perspective, but it should be remembered that of the 207 entities surveyed 50% came from Europe. 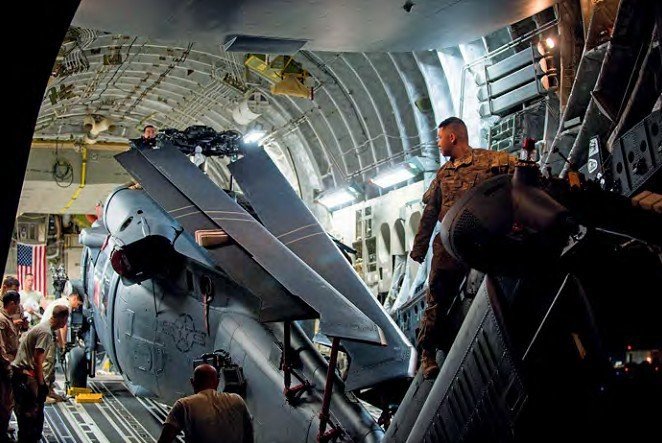 As with any such survey there are flaws and questions one would have liked to have asked, which is the point of the conference, but it certainly provides food for thought.

Military Airlift 2017 is on September 26–26, at the Pestana Chelsea Bridge Hotel, London. www.militaryairliftevent.com

An HH-60G Pave Hawk waits to be loaded onto a C-5M Super Galaxy, the world’s original strategic airlifter in service with the US Air Force since 1970. The C-5M is the latest variant powered by GE F138-GE-100 (CF6-80C2) engines and new components. According to Lockheed Martin, a C-5M Super Galaxy loaded with a 120,000lb payload has a range of 5,250 nautical miles. Airman 1st Class Eli Chevalier/US Air Force