What happened to Amelia Earhart?

Captured, cast away, new identities and crashes… what are the theories behind one of aviation’s most speculated disappearances?

On July 2, 1937, a flight took off from Lae, New Guinea, on one of the last legs in an historic attempt to circumnavigate the globe. This flight was piloted by Amelia Earhart, the first woman to fly solo non-stop across the Atlantic in 1932. With her, a navigator named Fred Noonan, who had been her only accompaniment so far in the gruelling journey. Their final leg began with a 2,500-mile flight to a small stretch of land in the centre of the Pacific Ocean named Howland Island, where a coast guard waited to greet the trailblazer and her colleague. From Howard Island, it would be just another 4,500 miles to Oakland in the United States, where they would conclude their flight.

However, the twin-engined Lockheed 10E Electra and its occupants would never reach Howland Island. Instead, all three would disappear, causing an unsuccessful worldwide search to ensue and kicking off one of the biggest conspiracy theories ever. So… what happened to Amelia Earhart?

Much like many other historic events whose fate has never been determined, the disappearance of Amelia Earhart was the catalyst to a great number of conspiracy theories. None of them have ever been proven or disproven as such, however there are a great many of people who strongly believe some theories to be more likely than others.

Captured by the Japanese

The first such theory addresses the possibility that Earhart and Noonan failed to locate Howland Island, and were forced to land in the Japanese-held Marshall Islands nearby. Presumed spies of the US government, some believe that Earhart and Noonan were transported to the island of Saipan and tortured to death. While there is little to no evidence to confirm this theory, there is speculation regarding the accounts of Marshall Islanders. Many have since recalled to their descendants of living during a time when a ‘lady pilot’ was held custody in Saipan. In refute of these claims, theorists have argued that there would have been no reason for the Japanese to have captured the two aviators – the US and Japan were not enemies until four years later. World War II hadn’t even broken out yet.

Of those who believe in the possibility of Earhart and Noonan’s Japanese capture, many have gone on to take the theory one step further. Some believe that Earhart did not die at the hands of the Japanese, but was let go. Following this release, theorists have claimed that Amelia went back to the United States and was given a new identity in order to protect her. Why? Well, it has also been speculated that Earhart and Noonan’s mission to circumnavigate the globe was a cover up for an even deeper mission in acting as spies for the Roosevelt administration (a further explanation of the spy claims relating to the Japanese). The theory even went so far as to name a woman, Irene Bolam, as Earhart. Despite Bolam’s denials and comments that the idea was outlandish and simply a ‘poorly documented hoax,’ the theory continued to be floated around as a possibility up until her death in 1982.

In perhaps a slightly less wild theory, there has been speculation regarding Earhart’s disappearance that proposes the idea of the plane veering off course and making an emergency landing on a relatively nearby island along the same line: Gardner Island. Uninhabited at the time, the American Navy sent aeroplanes to fly over the island, when the pilots spotted signs of recent habitation. Upon closer inspection, however, there appeared to be no sign of the Lockheed 10E Electra, or even any wreckage from an aeroplane. Some have considered that perhaps Earhart, or Noonan, or both, survived a crash landing at sea and managed to swim to Gardner Island, where they survived for weeks. However, there was no sign of any bodies to back this theory. What’s more, there had been a shipwreck in November 1929 of the SS Norwich City. Perhaps the signs of recent habitation could have been from survivors of a different wreckage?

Quite possibly the most reasonable of explanations into Amelia Earhart’s disappearance is that something simply went wrong, which caused the aeroplane to crash at sea and its occupants to drown. While this could explain many aspects of the disappearance, such as the lack of any wreckage, it also poses a new question. Why would the aeroplane have crashed? The last transmission from the Electra had been at 8:43am on the morning of the disappearance, when Earhart had stated that they were flying ‘on the line 157 337, running north and south’. Had they been on course to run out of fuel prematurely, then surely this would have been something for Earhart to have reported in her transmission? Much the same, if anything had gone wrong with the aircraft then some sort of communication would have been expected from the air crew. The possibility of bad weather was also quickly discounted when reports showed cloudy skies en route to Howland Island, but no adverse weather conditions – certainly nothing adverse enough to bring down an aeroplane.

Possible reasons for lack of communication

Before departing on their mission to circumnavigate the earth, Earhart removed a telegraph code key transmitter from the aeroplane. Harry Manning, another navigator with the skills to use the equipment, had left her crew and Earhart considered the apparatus as ‘dead weight’ when nobody on board could use it anyway. Before departing, she also dropped a trailing antenna that would have allowed her to use the 500-kilocycle marine frequency. Instead of Morse code, Earhart planned to communicate by voice at higher bandwidths.

On top of the crew’s lack of possibly vital equipment, Earhart had another issue to content with: her navigator, Fred Noonan. Despite being an extremely capable navigator, Noonan was a heavy drinker. On the day before the pair’s departure from Lae, Earhart had sent a telegram to her husband which read ‘RADIO MISUNDERSTANDING AND PERSONNEL UNFITNESS PROBABLY WILL HOLD ONE DAY.’ What had been the radio misunderstanding? And could the ‘personnel unfitness’ have been a reference to Noonan’s drinking? Had the two taken off while Noonan was still unfit to fly? As a result, he may have navigated the wrong course to Howland Island, causing the pair to run out of fuel before they could make an emergency landing and therefore meaning that they crashed out at sea. 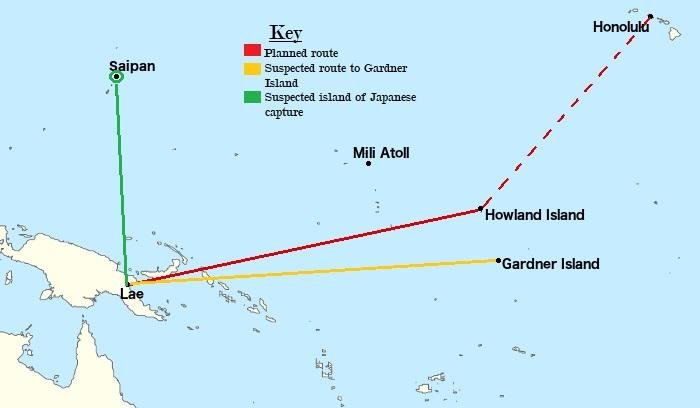 Conspiracy theorists and experts have speculated Amelia Earhart’s fate for now over 80 years. The sad fact is that the likelihood of ever knowing the exact events that lead to the disappearance are extremely slim. For such a trailblazing aviator to have been taken in her prime was a crime to the aviation industry itself. The question is… what’s your theory?