When the RAF Vampire became a record-breaker 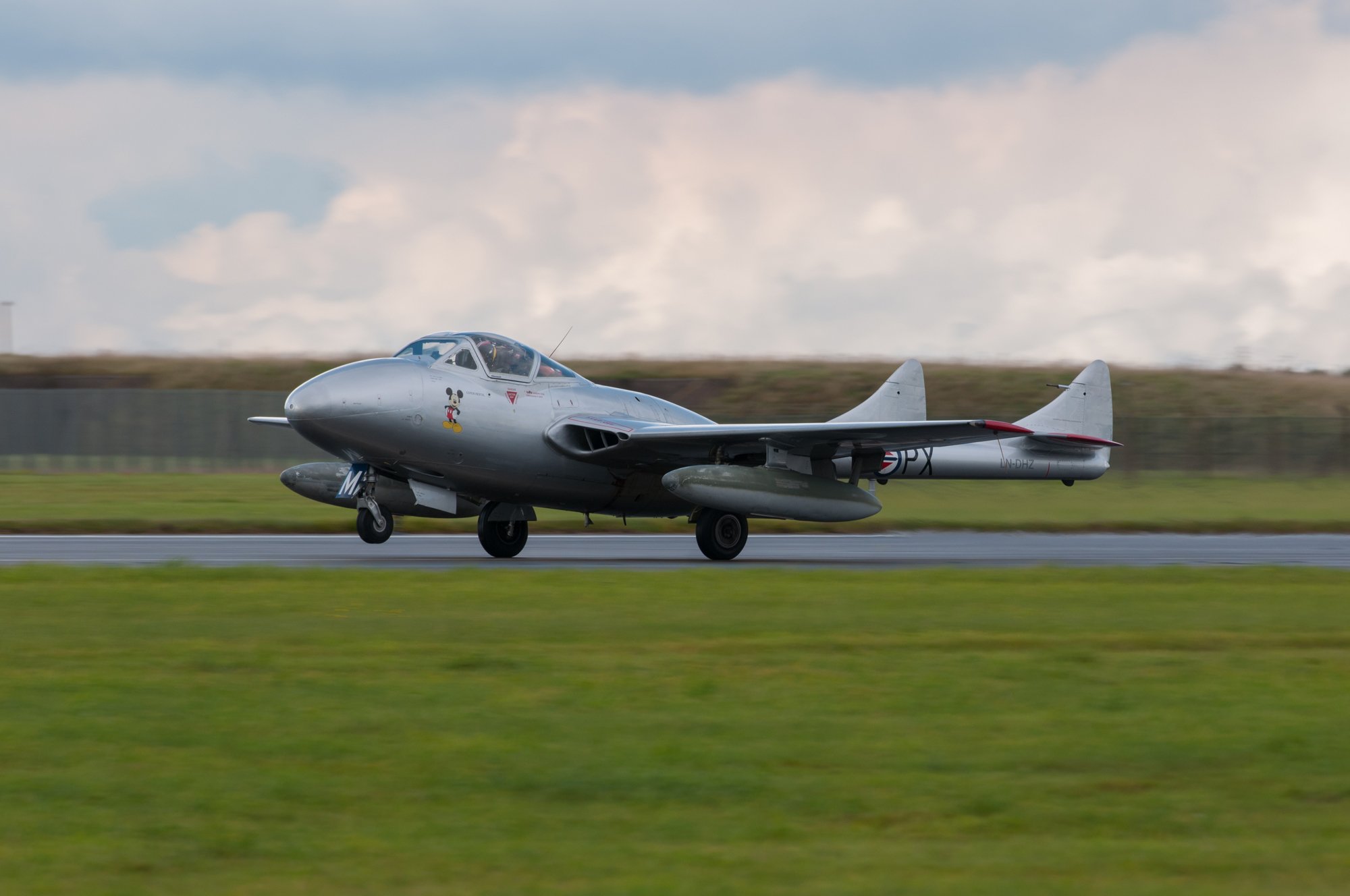 Today, flying across the Atlantic is a routine experience. In the 1940s, however, it was a far more daunting adventure. On July 14 1948, six Royal Air Force Vampires battled weather and dwindling fuel levels to become the first jet aircraft to complete a transatlantic crossing. Narrowly beating the US Air Force to the crown, the team ensured British engineering remained a point of pride for decades to come. 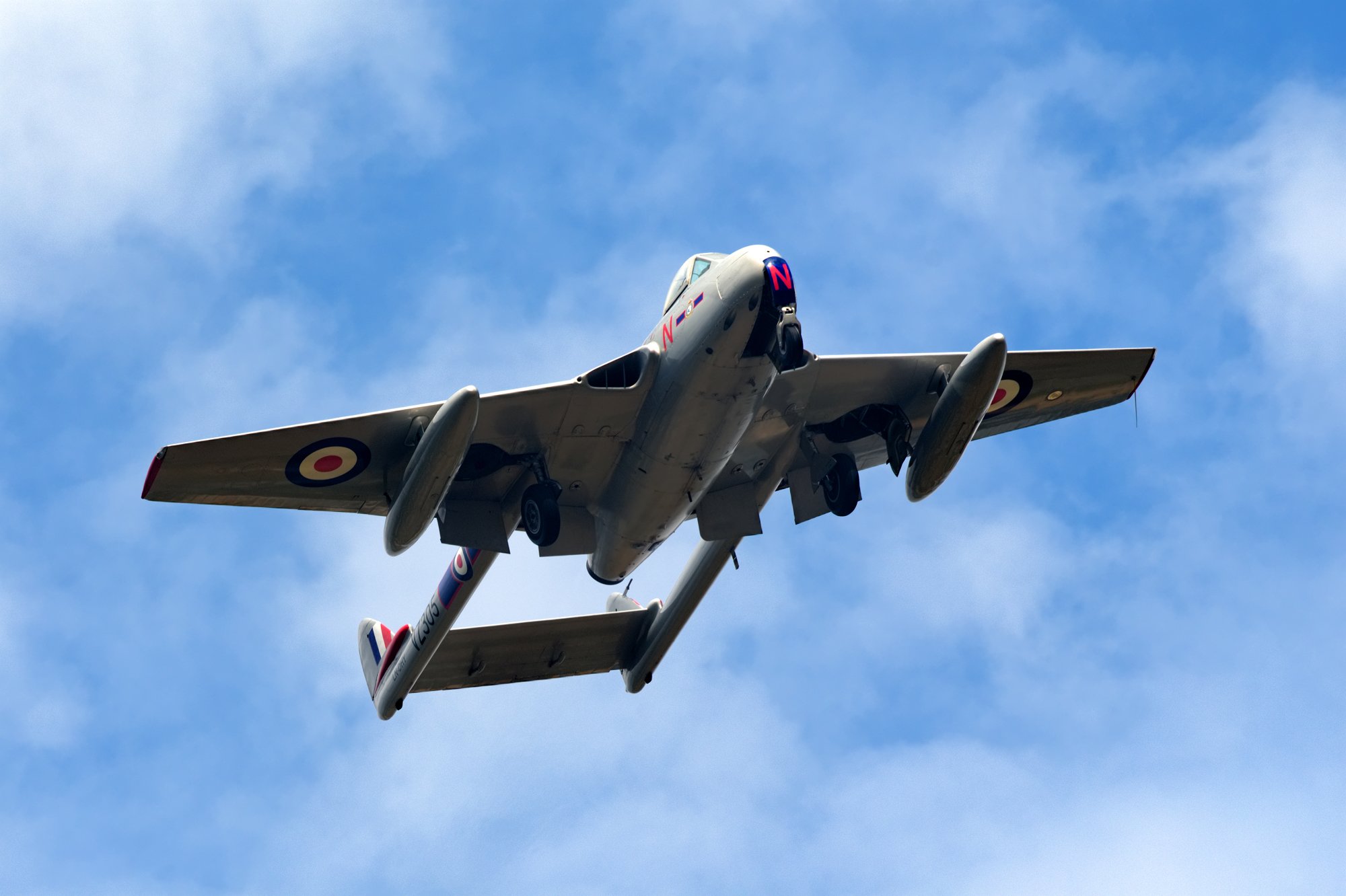 Goodwill tours of the USA had been underway since the end of World War Two. Typically conducted by bombers or transport aircraft, these tours showcased RAF personnel and machines to the American public. By 1948, jet fighters were becoming commonplace and, as such, the USAF requested that a fast-jet squadron make the next tour.

The initial plan was to transport the Vampires to the US on board an aircraft carrier, but concerns around embarking and disembarking the jets left the RAF with only one option: to fly. Despite making the journey in new Mk 3 Vampires, with increased internal fuel capacity and under-wing tanks, each leg was capped to a maximum of two hours and 45 minutes. This limitation in range and endurance meant four stops were needed to make the crossing. The route took the aircraft from their home base of RAF Odiham to Goose Bay in Canada via fuel stops in Stornoway, Keflavik in Iceland and Greenland.

Due to the lack of navigational equipment in Vampires, three de Havilland Mosquitos also made the crossing. Two Mosquitos acted as guides to steer the formation, while the third flew two hours ahead to provide meteorological updates. This third aircraft was flown by Squadron Leader Micky Martin, who had served as a flight commander during 617 Squadron’s famous ‘Dambusters’ raid in 1944. 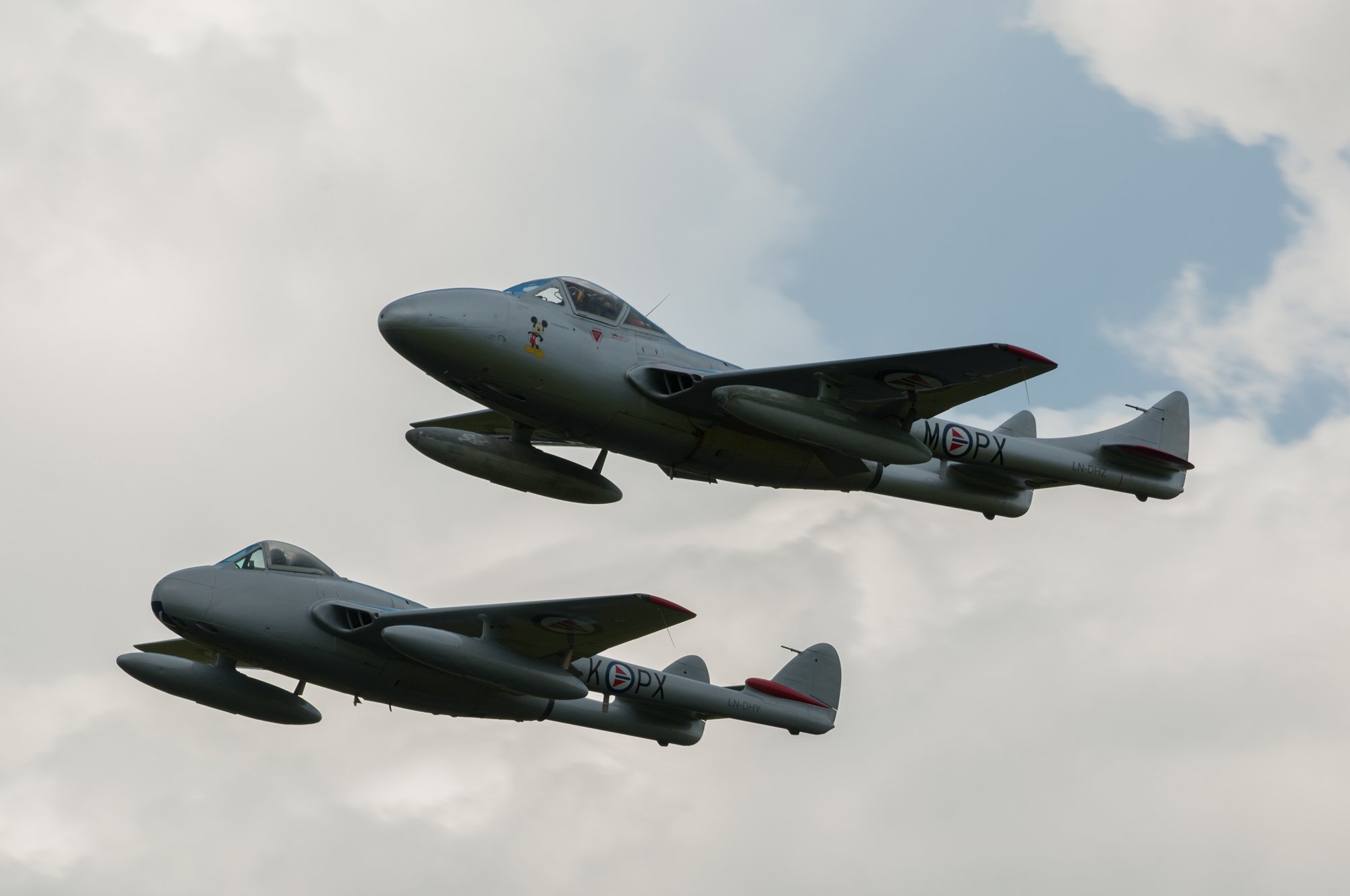 The Vampires and support aircraft departed Odiham on July 1, bound for Stornoway. The flight was straightforward, but the weather-ship Mosquito which had gone ahead to Keflavik reported strong headwinds of up to 150mph. This meant the Vampires would be unable to begin their second leg and were forced to remain in Stornoway for another 11 days, until the winds finally abated.

The pilots were keen to get underway as soon as possible; a rumour was circulating that a USAF team flying F-80 Shooting Stars were preparing to beat them across the Atlantic. As they would be flying west to east, the winds of the jet stream would be in their favour, greatly reducing their transit time. The pressure was on.

On July 12, the winds finally relented and the Vampires departed for Iceland. Although the flight was uneventful, after landing at Keflavik the weather played another joker: sea fog had rolled in, trapping the aircraft. The fog cleared two days later and the formation set off for Bluie West (now Narsarsuaq), Greenland. Just after lunch, the sound of jet fighters was heard overhead. The American team had arrived. 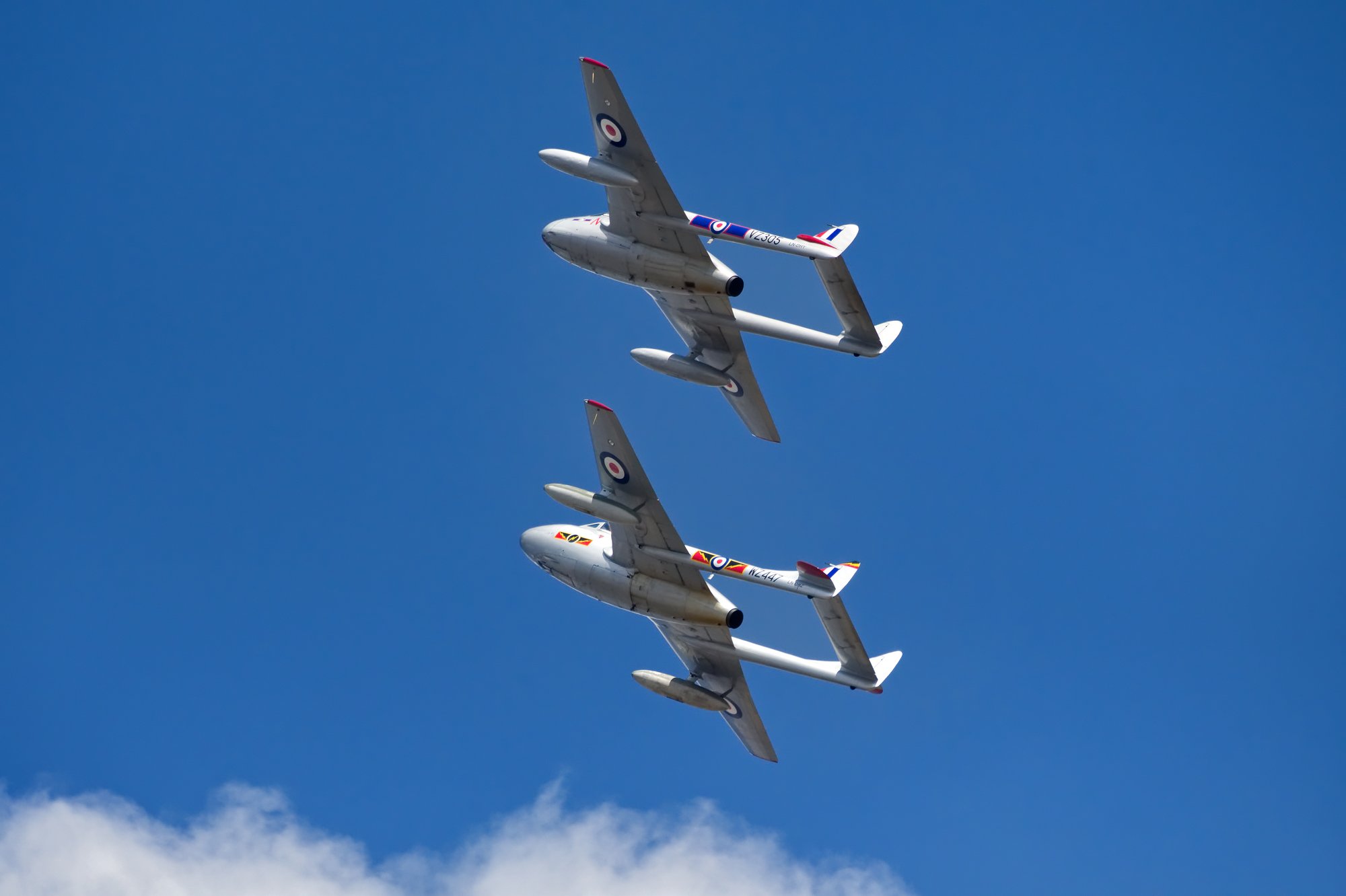 With the race very much on, the RAF pilots paused for a historic photograph with their US counterparts, before scrambling into their aircraft and heading for Goose Bay. On the way the weather once again conspired against them: thick cloud forced the formation to burn precious fuel descending and climbing to remain in clear air.

Two hours and 55 minutes after leaving Greenland, the formation touched down on Canadian soil. The RAF Vampires completed the crossing in an official time of eight hours and 18 minutes, beating the US team by a single leg.Flying across the Atlantic may now be more direct, but it is seldom as historic. 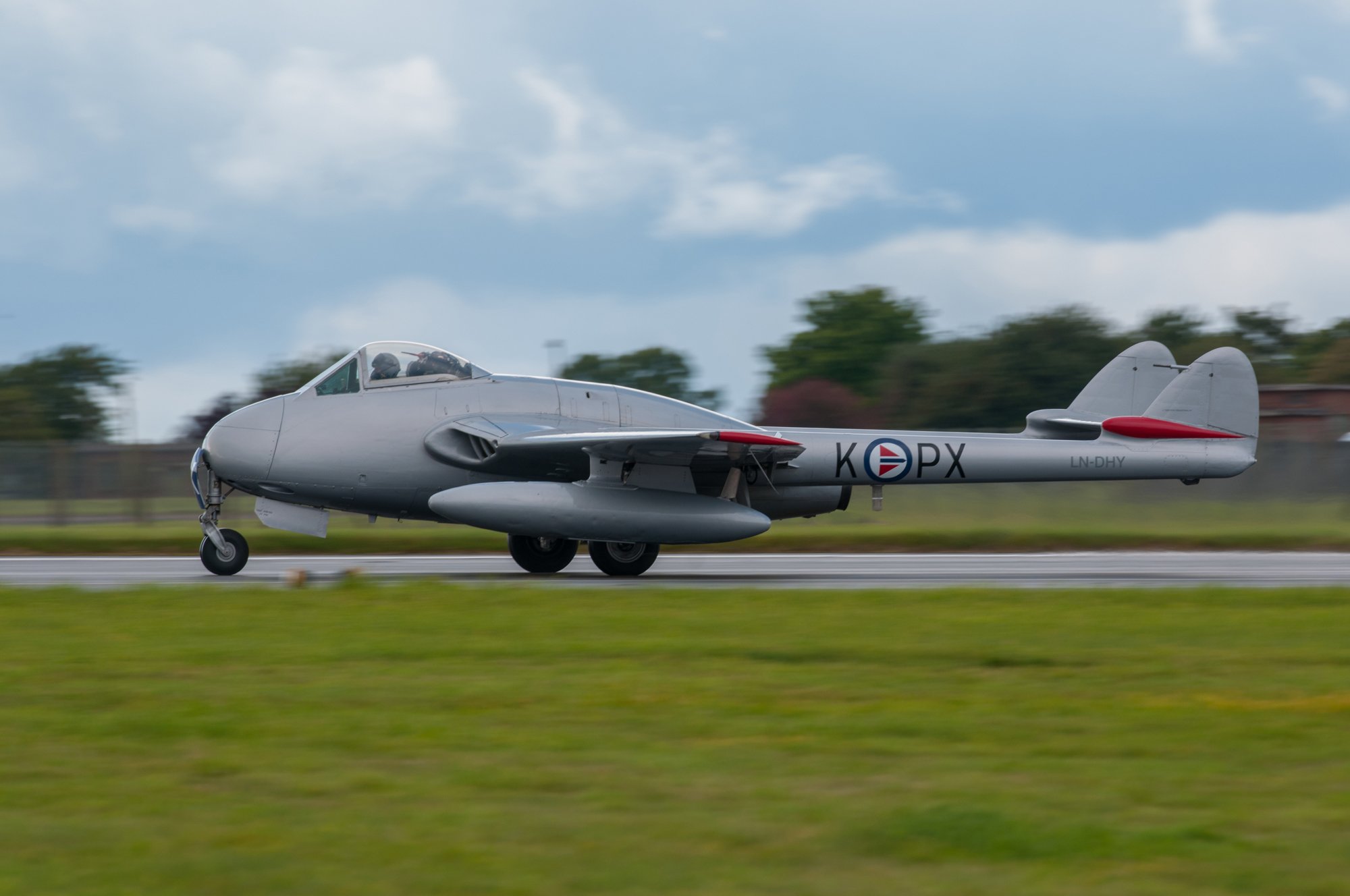