Wish you were here? 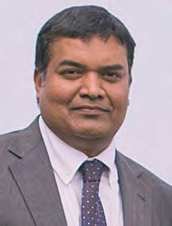 Space tourism is all the rage among the billionaire set, but is this something that mere mor tals can aspire to? Tara Craig talks to commercial spaceflight expert Dr Maharaj Vijay Reddy

July 2021 was quite a month for commercial space flight. First, we had entrepreneur Richard Branson and Virgin Galactic’s VSS Unity reaching space on July 11 for the spacecraft’s 22nd test flight, but its first with a full crew onboard. Just over a week later, Amazon founder Jeff Bezos blasted off on the Blue Origin-owned spacecraft New Shepard. He and his brother Mark were accompanied by Oliver Daemen and Wally Funk, the youngest and oldest people, respectively, to visit space. There have also been rumblings for some time that Space X founder Elon Musk is planning to head for the stars soon.

While this may make space travel sound like something of a billionaires’ playground, the rank and file are queueing up for the space experience too. Despite a hefty price tag of US$250,000 per flight, Virgin Galactic already has a 600-strong list of potential space tourists.