The popularity of the legacy Airbus A330 versions is reflected by a large operator base and continued investments to keep them fresh. Mark Broadbent reports 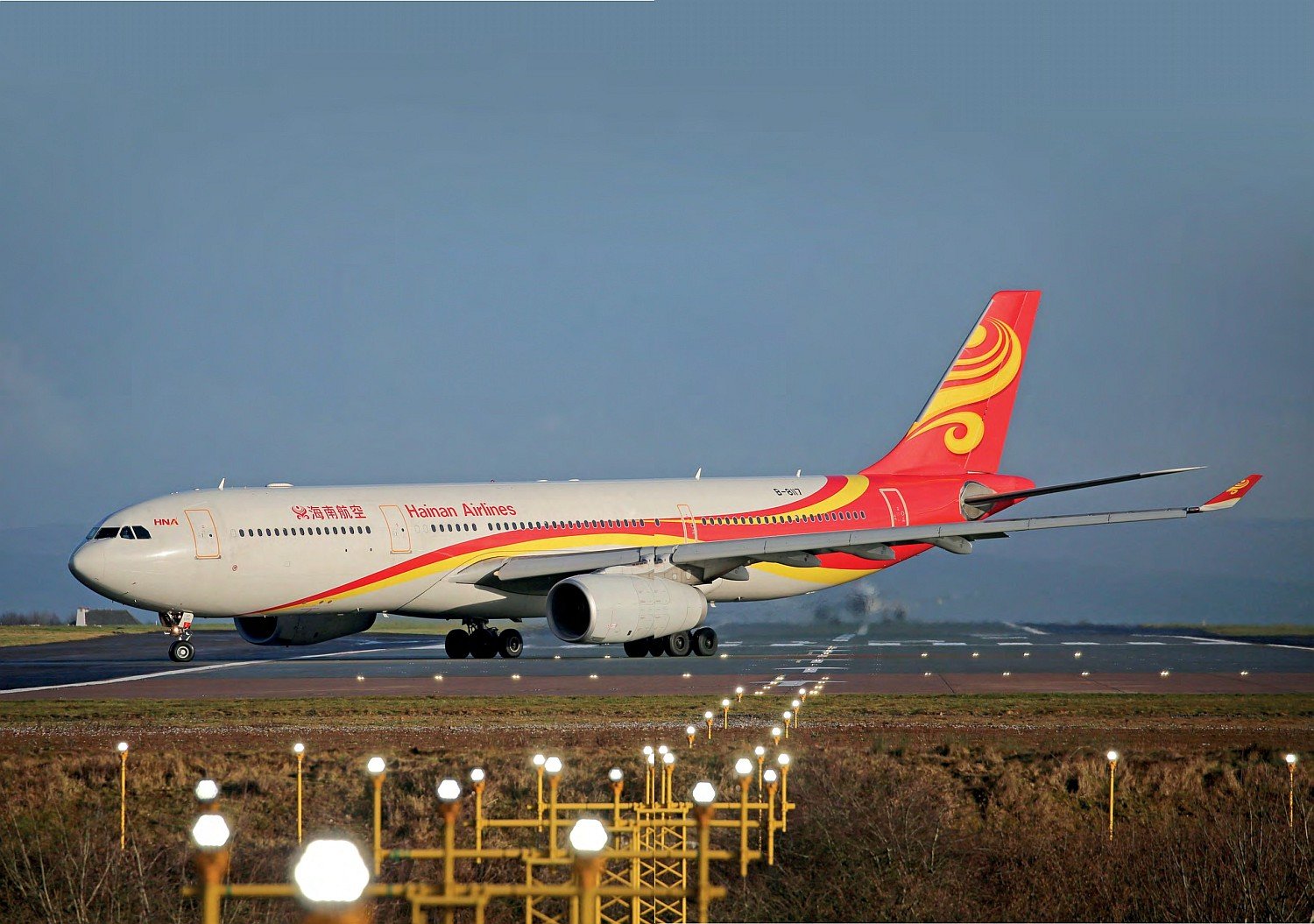 Hainan Airlines A330-300 B-8117 (msn 1677) exits the runway at Manchester on January 6, 2018. Airlines in the Asia-Pacific region operate 46% of the total in-service A330 fleet according to analysts ICF. Simon Willson/AirTeamImages

January 2018 marked 24 years since the Airbus A330 entered service and the original A330-200 and A330- 300 variants, today marketed as the A330ceo (classic engine option) to differentiate them from the newer A330neo (new engine option) models, have without a doubt been a great success.

Richard Aboulafia, Vice-President of Analysis at the Teal Group consultancy, told AIR International: “It was the first Airbus twinaisle to sell more than 1,000 aircraft and the first twin-aisle in the world to be built at rates above 100 annually.”

Despite the A330-200 and A330-300 having been around for a quarter of a century and the A330-900neo and A330-800neo variants launched in 2014 offering doubledigit savings in fuel burn, emissions and operational costs on their forebears, the appeal of the A330ceo models endures.

With all these sales filling production slots (the current output rate for the aircraft is six per month), A330ceo orders have slowed slightly in the last couple of years. Teal’s figures show 66 were sold in 2016 and Airbus orders and deliveries data showed just 25 A330s were sold during 2017, of which 17 were A330ceos.

Within the family variants, the A330-300 has significant concentration in the Asia-Pacific region, with nearly 60% of the fleet in service. Ten of the 15 largest operators are in Asia- Pacific, compared to only three in Europe and one in North America

“Given the long distances and the large passenger volumes airlines in the Asia-Pacific region need to transport, these statistics are not surprising, but it does expose the A330- 300 to potential challenges should the region suffer an economic downturn in a similar fashion to the 1998 Asian flu crisis.”

According to Airbus data, by February 2018 there were 1,392 passenger A330ceos in service worldwide. Rubin said the A330ceo’s market mass, which he defined as, “the ratio of aircraft in service and on order to the number of operators/customers”, is very good. Airbus figures show there are now 123 operators of A330s.

He said: “Aircraft with good market mass tend to be very liquid, as the opportunities to transition aircraft from one operator to another are numerous. The number of A330ceo series aircraft in storage, a proxy for asset demand, stood at about 5.5% of the current fleet [in-service and stored combined], but it also includes aircraft that may be transitioning to new operators. At a variant level, the A330-200 has a significant number of aircraft in storage, nearly 10%, while the share of A330-300s in storage was closer to 2%, indicative of strong demand for the latter type. Eight of the 15 A330-300 aircraft in storage are earlier-vintage A330- 300 variants (pre-2000), likely with lower maximum take-off weight (MTOW) that are operationally less flexible and thus may be less attractive to new passenger operators, but may represent an opportunity for the freighter [conversion] programme.”

As covered by AIR International in the January 2018 issue, the first A330s in the tripartite co-operative venture between Airbus, ST Aerospace and EFW covering passenger-to-freighter conversions for A330- 200s and A330-300s delivered its first aircraft to DHL Express late last year.

According to the International Air Transport Association’s Jet Fuel Price Monitor, prices have remained below $80/barrel since April 2015, compared to the $120 per barrel during the late 2000s and early 2010s.

The combination of low capital costs and cheaper fuel has narrowed the operating- cost gap between legacy types such as the A330ceos and newer aircraft. Airbus notes it has sold 1,200 A330s since the Boeing 787’s launch. A downside is that Airbus’s own newer, leaner and cleaner A330neos have been selling slowly. Nearly four years after launch, Airbus has sold 214 A330neos (all A330-900neos except for six A330-800neos). As Aboulafia put it: “The new generation twinjets are great, but they aren’t great enough to force the current A330s into an early grave.” 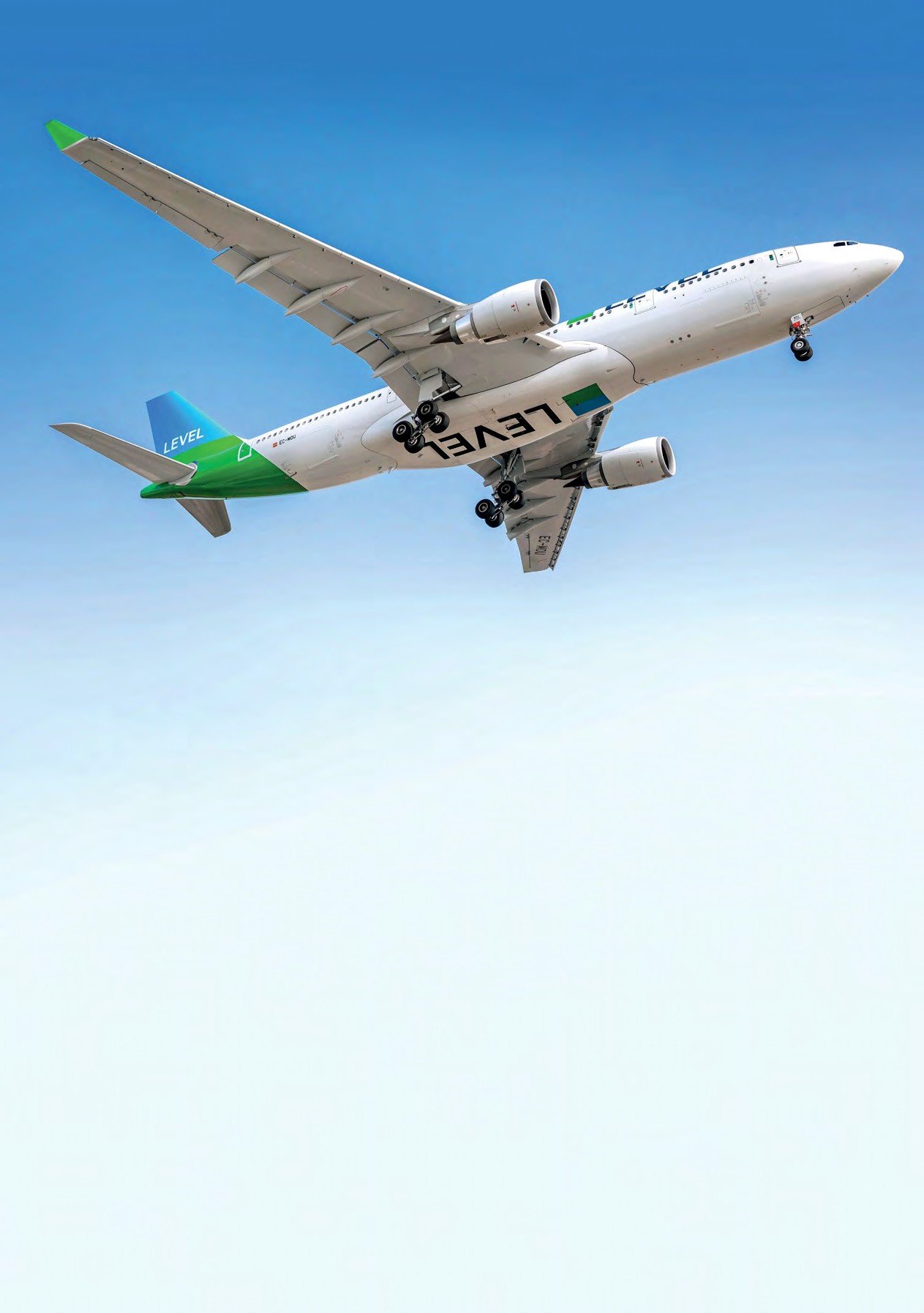 Ownership costs of legacy A330s are a key reason why the type has found use with low-cost long-haul operators such as Level. Here A330-202 EC-MOU (msn 1777) is pictured at Barcelona in September 2017. Matthieu Douhaire/AirTeamImages

An interesting insight into the A330ceo’s cost-effectiveness was given by Willie Walsh, the Chief Executive Officer of the International Airlines Group (IAG), parent company of British Airways, Iberia and Aer Lingus, during a question-and-answer session with investors at the company’s Capital Markets Day in November 2017.

Last year, IAG entered the low-cost long-haul air travel market with a newly established airline called Level using A330- 200s transferred from Iberia. According to a transcript of the Capital Markets Day published on the IAG website, during a response to an analyst’s question Walsh told those assembled: “We think the A330 is a great aircraft in the current environment. It is not as fuel efficient an aircraft as a [Boeing] 787, but when we look at the fuel efficiency and fuel benefit, it is small, relative to the ownership cost benefit that we have of an A330-200 against a 787. Getting airborne quickly in an efficient way with a low ownership cost, the A330 was the right aircraft for us.

“On the first [Level] flight to Los Angeles from Barcelona, I got them to run a flight plan for a 787 in a Norwegian configuration of 293 seats, so it was similar conditions. The fuel burn difference on our flight was six tonnes. Six tonnes at what is the spot price today [November 2017] is $580; you can see that is insignificant, relative to the ownership.”

Airbus says an A330ceo has a 10% lower cost per seat than a 787. Figures such as these may help to explain why several other low-cost long-haul airlines find A330ceos appealing. Both AirAsia X and Cebu Pacific use A330-300s and the Air France-KLM Group is transferring A330-300s from Air France to its new subsidiary, Joon, which will start flying long-haul later this year.

In the view of Aboulafia: “Interest rates are low, A330 discounts are higher than ever. To bring in a more expensive new-generation twin-aisle, you really need to fly it on longerrange routes, where its capabilities and efficiencies really show through. For shorter routes, an A330 is still a respectable bet.”

Beyond macroeconomics and market conditions, Airbus has boosted the A330ceo’s appeal in the last few years by introducing many airframe and systems upgrades through an incremental development programme in which the company says it has invested €150 million a year.

Fatigue life has been extended by introducing aluminium alloys for wing stringers and skins and composites for certain parts, such as the rear pressure bulkhead. Using lighter materials, implementing changes such as a fly-by-wire rudder and introducing tweaks such as a smoother wing upper surface profile and a shortened flap track fairing has saved weight and cleaned up the aircraft aerodynamically.

Airbus has also enabled operators to switch between different weight configurations. An A330 might be delivered with a relatively low MTOW (operators can pick from 12 different weight variants), but it can be reconfigured to a higher MTOW if required. The A330 also has what Airbus calls a dynamic payload capability, where an operator can trade-off MTOW against maximum zero fuel weight to keep the airframe loading within the aircraft’s structural capability; the idea is operators can optimise for MTOW on a flight-by-flight basis.

For the 242,000kg (533,519lb) MTOW weight variant, Airbus introduced an upgraded cabin environmental control system that automatically adapts airflow through the air conditioning pack, depending on passenger numbers to maintain a constant ventilation rate, and a full LED mood lighting system inherited from the A350.

A big focus in the airline business in recent years has been connectivity, with airlines seeking to match air travellers’ demands to stay connected. This has created an ecosystem of software and connectivity specialists and encouraged manufacturers of legacy aircraft to ensure older equipment is refreshed and therefore valuable for asset owners.

For the A330ceo, the trend has led Airbus to introduce new features in the connectivity offering on the aircraft. In October 2016, the company successfully flight-tested on an A330 development aircraft a new standard high-bandwidth connectivity (HBC) on-board architecture.

Airbus told AIR International: “The cabin connectivity equipment from the selected suppliers is provided on BFE [buyer furnished equipment] basis. They are integrated in the Airbus standard architecture. This architecture allows mix and match possibilities meaning you can have an IFE [in-flight entertainment] supplier different from your connectivity supplier. You can have both the same IFE and connectivity supplier as well. We want to propose flexibility and choices to our customers.”

In addition to providing IFE for passengers, the connectivity also supports Airbus’s digital flight operations products and support services. The A330ceo has Class 2 electronic flight bag (EFB) compatibility to support flight operations applications. Airbus told AIR International: “Tablet EFBs for pilots can be connected by wi-fi in the cockpit to the aircraft avionics and communication systems. Pilots are connected to their ground operations, have access to the latest weather info during flight, and are able to exchange the flight plan updates with the flight management system bi-directionally.”

The HBC platform was rolled out on the A330ceo from mid-2017 onwards and several A330ceo operators have taken it up as a retrofit. For example, last October saw Thai Airways International sign an agreement with the Airbus in-house Customer Services Upgrades division to modernise three A330- 300s with new business and economy class seats and HBC architecture for Ka-band GX capability. The retrofit is due for completion later this year.

Other operators are having their A330s upgraded with new cabins and connectivity by third-party maintenance, repair and overhaul providers that have supplementary type certificates for work on the type. Sabena Technics is to upgrade seven Lufthansa A330-300s with new interiors; the first is being worked on and is due for completion in the spring. Meanwhile, Lufthansa Technik is to add HBC to Philippine Airlines’ A330-300s as part of a comprehensive cabin upgrade that also includes reconfigured economy, premium economy and business classes. In December 2017, KLM announced it had completed the first cabin refit on its A330- 300s. The carrier’s 12-strong fleet is being upgraded with a new World Business Class interior, which includes Gogo provision. The work is due for completion by the end of the year.

Such improvements, and more broadly airlines’ commitment to the type for many years to come (IAG, for instance, has said it wants to grow its A330 fleet to 37 jets by 2020, up from 32 in 2017) only emphasise the legacy A330’s value. It may have been around for a quarter of a century, but this aircraft’s workhorse role in the air transport network is set to continue. AI

“The new generation twin-jets are great, but they aren’t great enough to force the current A330s into an early grave.” 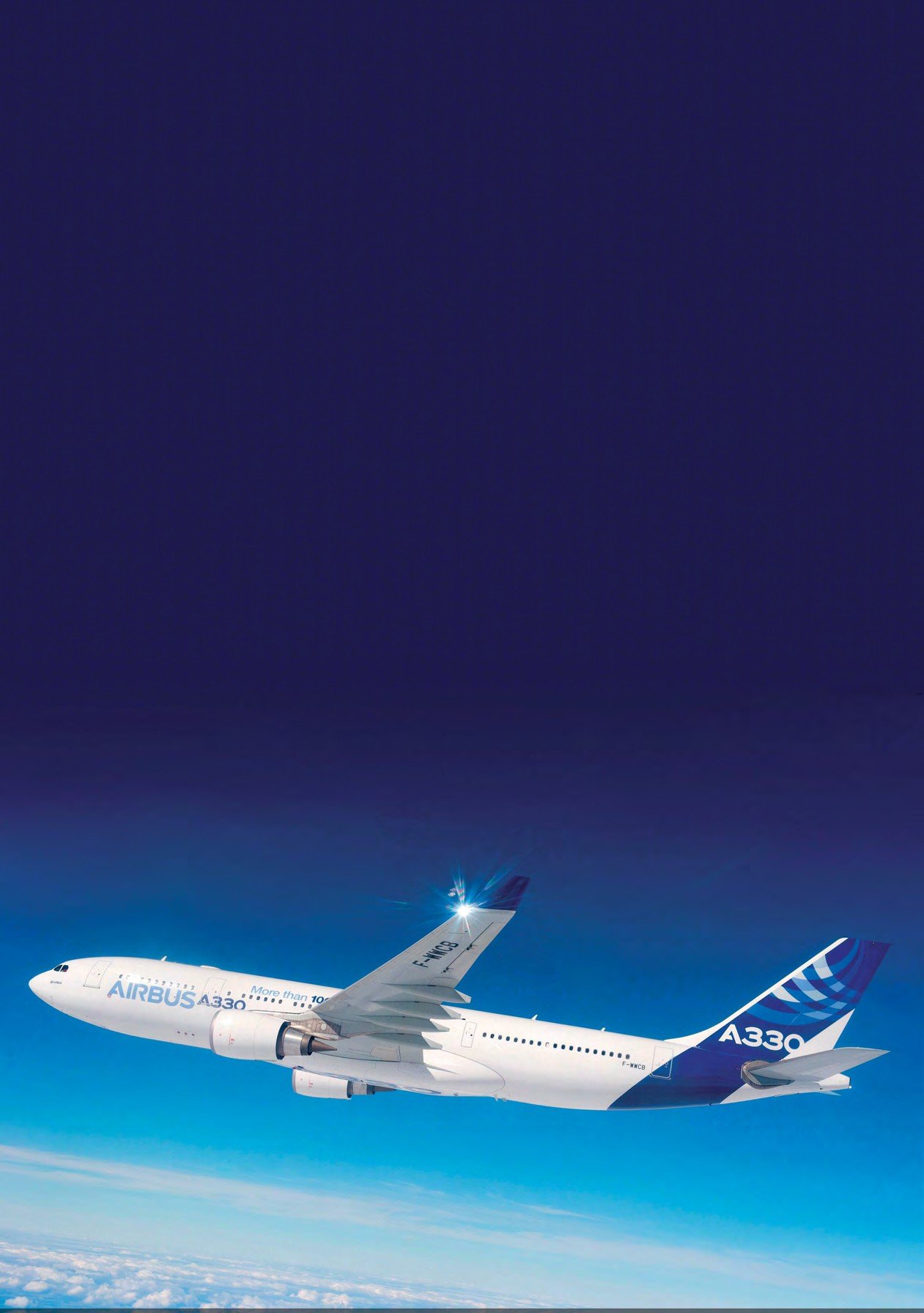 Airbus has invested €150 million a year in an incremental development programme for the legacy A330. H Goussé/Airbus